Despite Mickey Mantle being noticeably absent, the 1954 Topps baseball card set is one of the most iconic of the vintage era.

Considering there are three monster rookie cards included, it's not hard to understand why...

Oh, and Ted Williams made his Topps debut by bookending the set with both the first and last cards to his name so that helps, too.

Mix all that with bright coloring, the company's first use of dual player images, and a checklist that includes some of the biggest stars of the era and you've got one of Sy Berger's greatest creations.

And in this guide, I'll run through the ten most valuable in this incredible set.

Leading things off is the rookie card of the great "Hammerin' Hank" Aaron which is one of the most desirable cards in the entire hobby.

The career leader in RBI with an incredible 2,297, Aaron is perhaps most notable for snapping Babe Ruth's career home run mark when he sent his 715th ball over the fence in 1974.

With its orange background and fantastic imagery of the young slugger, this card packs amazing eye appeal.

One of many great cards in the 250-card checklist, this one stands alone at the top. If your name is "Mr. Cub" and you're the face of one of the most beloved franchises in all of sports then you know you've got to be something special.

And Banks certainly was as he brought joy, enthusiasm, and an ability to hit for power that practically redefined how shortstops could be perceived.

The 14-time All-Star and Chicago Cubs legend would easily be the star of this set had it not been for Hank Aaron.

Nonetheless, this card is still highly sought after and can be worth thousands of dollars in top condition. Before the release of this set, Ted Williams had been exclusive Bowman.

Landing Williams was no easy task and Topps paid handsomely to sign him to a five-year deal.

Whether it was to help justify that steep cost or just to celebrate landing the huge star, Topps placed him at both ends of their set with cards #1 and #250.

It's well-known that the first and last cards of this era are notorious for being damaged for two key reasons:

Williams' status as a baseball icon mixed with the added rarity of finding these cards in top condition make them very price to own. After missing most of the 1952 and all of the 1953 seasons due to his service in the Korean War, you'd think Mays would have been a bit rusty upon returning in 1954.

It was quite the performance and for his efforts, Mays collected his only batting title and first of two MVP awards of his career.

That season put him on the map and he was well on his way to becoming arguably the greatest player of all-time. 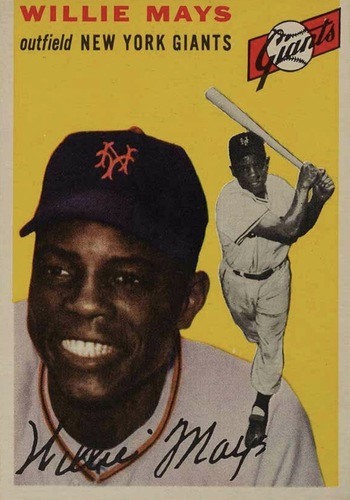 One of the most impactful people in all of baseball and American history, Jackie Robinson's cards are always a key to any set in which he appears.

This is one of his finest-looking cards as the yellow background and fantastic dual imagery really make this car pop.

Clearly on the backend of his career, Jackie still had enough left in the tank to put together one final All-Star season in 1954. Like Banks, Kaline was one of the few players in history to earn his team's moniker as he went on to become known as "Mr. Tiger".

Membership in the 3,000 hit club, 18 All-Star appearances, 10 Gold Gloves, one batting title and one World Series ring cemented Kaline's legacy as one of the best who ever played.

The image of the youngster with that grin atop a rich, red background make this card pop almost as much Kaline's bat. You may be surprised to find Ben Wade ahead of guys on this list like Warren Spahn, Yogi Berra and Duke Snider.

After all, over Wade's brief five-year career as a Major League pitcher, he bounced around between the Cubs, Dodgers, Cardinals and Pirates.

He was much more successful later as a scout for the Dodgers as he helped find many great players that helped Los Angeles to 16 National League titles and 4 World Series championships during his tenure.

So why is his card in this spot?

Well, no other player in this set has fewer specimens of his card graded in PSA 8 condition making Wade's card the rarest in this condition.

Since many collectors are trying to complete this set in high grade, they are willing to pay huge prices for this card in PSA 8 holders.

This is a shining example of how rarity can be a huge value driver even when a player isn't necessarily a big name. Buster Mills is another case like Ben Wade where the high price tag of his card is entirely driven by its rarity in high grade.

Mills' first appearance in Major League Baseball came as a player with a brief stint with the 1934 "Gashouse Gang" Cardinals.

From then on he bounced around from team to team and from the Minors to the Majors until he became a coach for the Indians in 1946.

After serving as the interim manager of the 1953 Cincinnati Redlegs, I believe Mills made his last appearance in the Majors as a third base coach with the Boston Red Sox. This has always been one of my favorite Yogi Berra cards because of the up-close shot of him in the catching position.

I believe his 1950 Bowman issue is his only other mainstream card where he's shown posing as a catcher.

It was yet another example of how he was one of the anchors to those great Yankees teams of the late 40s, the entire 1950s and early 1960s.

That's why he holds the honor of being the player with the most World Series rings in history with 10, enough for one on each finger. Shortly after Doby's debut with the Indians, Hank Thompson became the third black black player to integrate baseball and first to integrate the St. Louis Browns on July 17, 1947.

However, Thompson spent the majority of his career with the New York Giants from 1949 to his retirement in 1956.

Along the way, he would enjoy several successful seasons and even picked up a World Series ring with the Giants in 1954.

The value of his card skyrockets in high grade since relatively so few of them exist. While Jackie Robinson made his legendary debut with the Brooklyn Dodgers on opening day on April 15, 1947, Larry Doby made history himself a bit later as he became the first black player to integrate the American League on July 5, 1947.

Setting career marks in home runs (32) and RBI (126), Doby finished second in MVP voting to Yogi Berra for his performance during the 1954 season. Duke Snider was at his finest in the 1950s as he put up monster numbers year after year and frequently finished in the top ten in voting for MVP.

Snider could tear the cover off the ball.

It was enough to make him a huge star and his name mentioned alongside Mickey Mantle and Willie Mays as one of the best centerfielders of the era. While the 1954 Topps baseball card set is relatively small in size, it obviously packs a huge punch with all the star power and key rookie cards it contains.

The dual imagery and bright coloration make it one of the best-looking of the entire vintage era.

And, yes, it would have been just a bit better had Mantle been included but when you review just how special this set is, it's hard to complain.