While the 1955 Topps baseball card set may not be the biggest in terms of its checklist...

...few sets pack the star power that this set did.

Because of the checklist, the innovative horizontal design and the incredible artwork, this set ranks high atop the list of favorites for many collectors, including myself.

But, within such an iconic set, which are the most valuable?

In this guide, I run through the ten most valuable cards in this iconic set.

Roberto Clemente's importance to the sport of baseball cannot be understated.

Fittingly, his 1955 Topps rookie card has become a hobby icon making it one of the most valuable baseball cards there are.

And although the Sandy Koufax and Harmon Killebrew cards are also key rookie cards in this set, Clemente's is far and away the most expensive of the trio.

Mint condition examples of Clemente's rookie card will easily set you back into the six figure range.

I really cannot say enough about this card as it will forever be one of the most important post-War cards you can collect. As a Dodger fan and collector of Sandy Koufax baseball cards, I must say I am a bit partial to this card.

While not as expensive as the Clemente rookie, Koufax's rookie can also approach the six figure range in mint condition.

I don't know if I can pick one Koufax card as a favorite but this one is definitely up there.

The bright yellow background and images of the young Koufax in his Brooklyn Dodger gear produce exception eye appeal.

Centering can be a challenge as can print marks in the yellow background. 1955 has gone down in baseball history as the year that Jackie Robinson helped lead the Brooklyn Dodgers to their only World Series title before the team moved to Los Angeles.

It was a momentous year for the team, and especially for Robinson himself.

Known primarily for his time at second base, Topps listed him as a third baseman and outfielder as he was spending more time there at the end of his career.

The headshot and action shot that Topps chose for this card really make it stand out from a design standpoint.

I don't know if I have a favorite Jackie Robinson card (I love them all) but this one is definitely up there. Like the Aaron card from this set, Topps used the same head shot on Mays' 1955 Topps issue as they did the year before.

At least they changed up the action shot so not everything was duplicated.

The blue background and terrific imagery make this one of Mays' best-looking cards overall.

Incredibly, those monster statistics were not enough to help him win his second consecutive MVP award as he would finished in fourth place in the vote that year. Could you ask for a better action shot of the "Splendid Splinter" than the one Topps chose for his 1995 card?

What a great look at Williams' beautiful and legendary swing.

Because he was arguably the game's greatest hitter of all-time, his cards will always rank among the most valuable in any set in which he appeared.

This one is no exception as mint condition examples will cost you into the five figure range.

Centering and print defects in the yellow background are common challenges that keep many from reaching those lofty heights, however. Even though Topps used the same head shot as was on his 1954 rookie card, they made up for it with a great overall design.

The full color image of Aaron swinging the bat and facsimile signature are nice complements.

This is one of my favorite Hank Aaron baseball cards and you could argue it's one of the best-looking cards in this set.

It's incredible to think that Aaron would eventually be selected to 25 straight All-Star games, with the 1955 season marking the first year he'd receive that honor. However, you must remember that baseball card values can depend on several quirks and factors.

In this case, Snider's card was the last one printed in the set.

And usually, the first and last cards of any vintage set get a boost in value because they're tougher to find in top condition.

Remember, kids used to stack these cards and secure them with rubber bands.

And usually, they did so sequentially.

So Snider's card often found its place at the bottom of the stack and would be much more susceptible to wear and tear from the rubber band.

Add to this fact that Snider himself is a legendary Hall of Famer and that 1955 was a monumental year for the Dodgers.

Since they'd go on to win the World Series that year, many Dodger fans love Dodger cards from this set based on that association alone.

So, you can see that there are multiple factors at play here that contribute to the high value of this card. The third key rookie card in this set, Harmon Killebrew comes in just behind Snider for fourth place on the list.

Like any of the 1955 Topps cards with yellow backgrounds, Killebrew's card really pops with strong coloration and eye appeal.

I think Killebrew is often overlooked compared to some of the players who played during his era.

For example, did you know it wasn't Aaron, Mantle, Maris, or Mays who produced the most home runs during the 1960's?

It was Killebrew--he belted an astounding 393 home runs that decade.

Don't get me wrong, his rookie card is still extremely popular and incredibly valuable.

I just think it has always been a bit undervalued. Ernie Banks is another one of those Hall of Famers whose card is among the most desirable of any set in which he appeared.

Ernie's card shows a nice, large head shot of him along the right with a nice action shot of him crouched and ready at the shortstop position.

The red background really gives this card some great eye appeal as it complements his Cubs uniform nicely.

Banks was a legend, to say the least, but because he didn't quite have the star power as Aaron, Mays or Wiliams you can expect to pay relatively much less for this card compared to those. 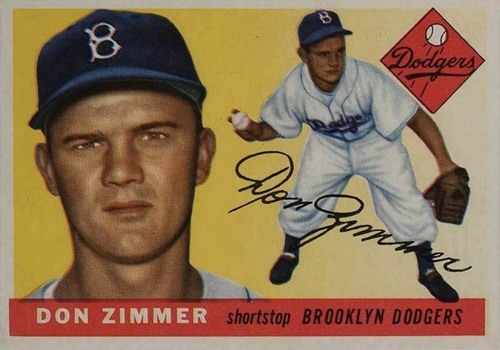 Podres was a four-time All-Star and three-time World Series champ.

It just so happens, though, that one of those championships he won was in 1955 with the Brooklyn Dodgers.

Not only did he help the team win, he was named MVP of the series.

In two starts versus the powerhouse that was the New York Yankees, Podres absolutely dominated them.

Amazingly, he allowed only two runs across two complete games, one of which was a shutout.

That kind of performance for a legendary team during an iconic World Series helps skyrocket the value of Podres' 1955 Topps card. So, there you have it, the ten most valuable 1955 Topps baseball cards.

There may not be many cards in the set but there is a whole lot to love about them.

From the innovative 3-3/4" by 2-5/8" horizontal design to the incredible artwork and strong group of legendary Hall of Famers, this set has just about everything you could want.

Other than that, this set has all of the legends of the day and three key vintage rookie cards in Clemente, Koufax and Killebrew.

Because of these features, this set will always be among the most desirable of any set in the hobby.