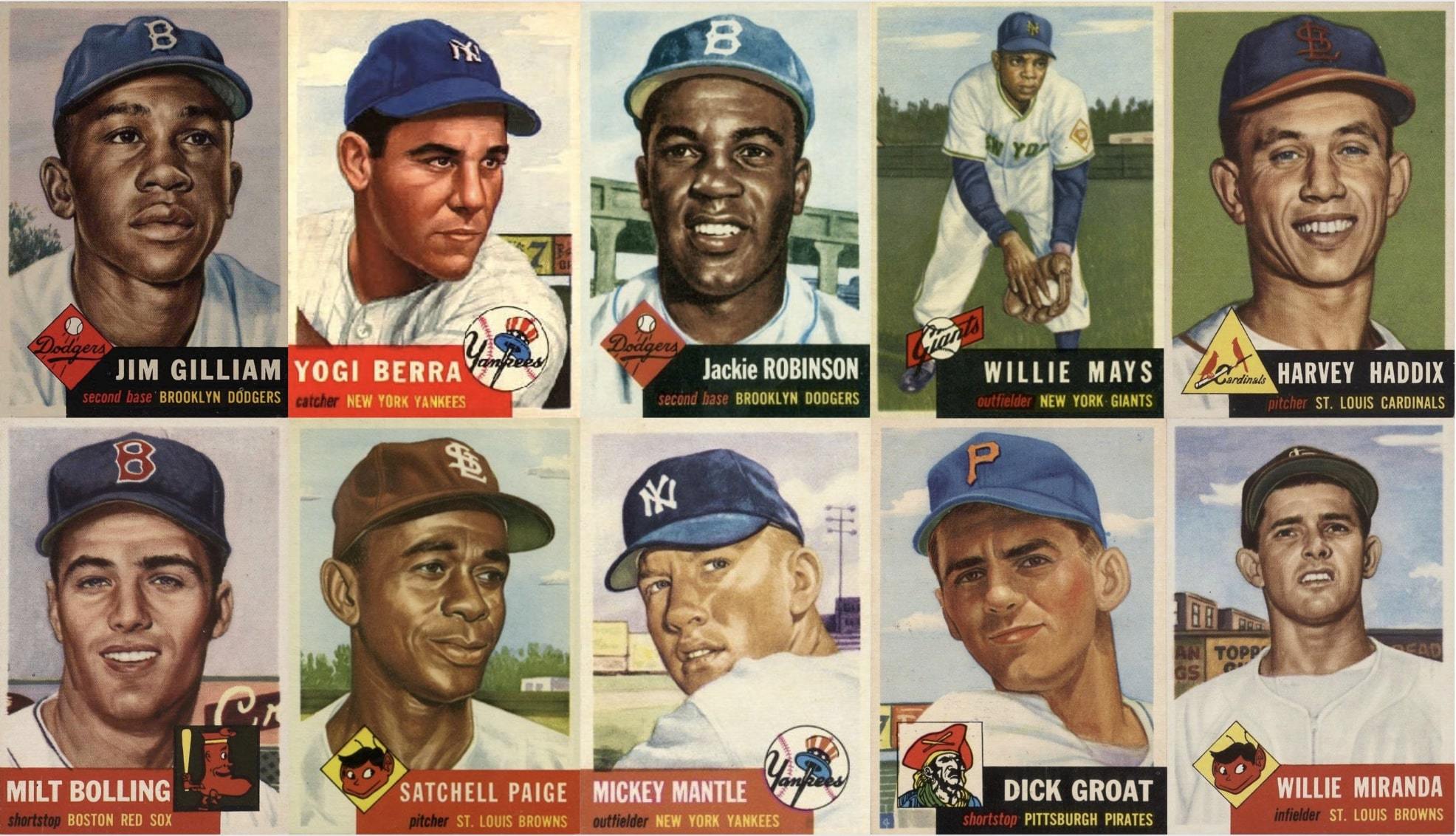 Few sets in this hobby resonate as universally well among collectors as the 1953 Topps baseball cards do.

And it has everything to do with what many consider to be the most beautiful artwork ever to grace the fronts of any baseball card set...

While its 274-card checklist may pale in size compared to its 407-card predecessor, the legendary 1952 Topps set, many would argue that these cards pack more aesthetic punch than any other hobby history.

But, evidently, hobbyists have long since gotten over the puzzling printing process and cherish these cards.

And in this guide, I'll run through the twelve most valuable.

Considered by some to be his most beautiful baseball card, the 1953 Topps Mickey Mantle features incredible artwork of the young Mick looking over his left shoulder in his Yankee ball cap.

Mantle had a fantastic season that year, earning his second consecutive All-Star selection and leading the Yankees to their fifth straight World Series title after defeating the Brooklyn Dodgers 4-2.

With so many terrific Mantle cards to collect, it's tough for me to choose just one favorite when it comes to the overall design, but this one is undoubtedly a top-five candidate.

Like all cards in this set, the colored nameplate along the bottom border is prone to showing wear and chipping, which prevents higher grades.

But, this card in any condition is nothing to balk at with even lower-grade examples fetching steep price tags. Willie Mays cards, like the man himself, continue to hold superstar status when it comes to vintage baseball cards and this one is no exception.

Like Mantle, I'd argue that Mays' 1953 Topps issue is one of his best-looking cards as the artwork of the Say Hey Kid fielding the ball in his New York Giants uniform is absolutely gorgeous.

Unlike Mantle, however, Mays did not get a chance to participate in Major League Baseball during the 1953 season after being drafted to serve in the Korean War.

Mays missed most of the 1952 season, too, playing in just 34 games before being inducted into the United States Army on May 29 at Camp Kilmer.

Had he not missed so much time, it makes you wonder if Mays would've broken Ruth's all-time home run record before Hank Aaron did. 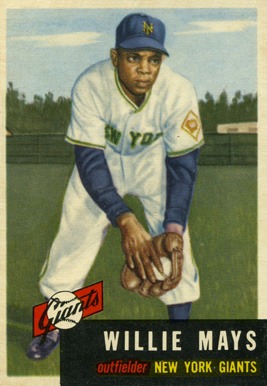 Honored with the number one spot in the set, Jackie Robinson needs no introduction.

A baseball hero and true American icon, Robinson's importance to the sport and this nation cannot be overstated.

For years, Jackie was an anchor to many of those great Brooklyn Dodgers teams, and the 1953 season was no different as he batted .329, scored 109 runs, and drove in 95 more while leading the team to a World Series showdown against the Yankees.

While the Mantle and Mays cards were single prints, Robinson's card was double-printed making them relatively easier to find.

Had this card been a single print, it's value would be even more astronomical than it already is. This card receives particular notoriety as Paige's only Topps baseball card as the legendary hurler would retire after the 1953 season and was not included in the 1952 Topps set for whatever reason.

In general, Paige cards, are few and far between as he did not start playing Major League Baseball until the 1948 season when he became the oldest man ever to debut in the big leagues at the age of 42.

It's impressive that he was able to pitch at a high level for so long.

Still, along with his incredible pitching ability, Paige was also known for his longevity (he even threw in one game for the Kansas City Athletics in 1965 at the age of 59).

If you look carefully, you'll notice that Topps misspelled Paige's name on both the front and back of this card as they included an extra "l" in "Satchel." Milt Bolling spent seven years in the Majors but never quite turned out to be a household name like the first four gentlemen on this list.

So, what makes his card so expensive in high grade?

To start, not only is this his rookie card, but it's also one of the short prints in the set, meaning that fewer of his cards were printed, making it automatically more scarce to those of other players by comparison.

More importantly, however, his card was the last in the checklist, making it more susceptible to damage.

In those days, kids and collectors who organized their cards into stacks based on chronological order would use rubber bands to hold them together.

Those rubber bands wreaked havoc on the first few cards on the top and bottom of the stacks, making Bolling's card harder to find in top condition.

Jackie Robinson's card would have been expensive anyway, but his card being the first in the checklist does get an extra boost in value for the same reason as Bolling's. A staple in the Dodgers lineup from 1953 to 1966, Gilliam spent his entire 14-year playing career with the team and helped lead them to four World Series titles during that timespan.

Gilliam transitioned to a player-coach role during the 1965 and 1966 seasons and later became a full-time coach for the Dodgers from 1967 until he died in 1978, leading the team to three more World Series appearances along the way.

The Dodgers retired Gilliam's number 19 (the only non-Hall of Famer to receive that honor) two days after his death before Game 1 of the 1978 World Series.

Players from those Brooklyn Dodgers teams of the 50s are beloved by fans and hobbyists, so Gilliam's rookie card remains incredibly popular among collectors.

Being a short print also gives his rookie card an additional boost in value. Because he is not a Hall of Famer, Dick Groat is one of the better players who frequently slips under the radar when it comes to vintage baseball cards.

Groat finished third in Rookie of the Year voting for the 1952 season, was an All-Star in five different seasons, and won both the batting title and MVP award for his efforts in 1960.

A two-time All-American basketball play for Duke University, Groat was also drafted third by the Fort Wayne Pistons (now Detroit Pistons) and played in 26 games during the 1952-1953 NBA season before leaving for military service.

Groat did not return to the NBA and missed the entire 1953 and 1953 MLB seasons.

Although he made his cardboard debut in the 1952 Topps set, his second-year card in this set is more difficult to find in high grade and, therefore, more valuable. Harvey "The Kitten" Haddix pitched for five different ball clubs during his 14-year career in the Majors and picked up three Gold Gloves, three All-Star nominations, and one World Series ring along the way.

To say Haddix broke out during his rookie campaign in 1953 would be an understatement as he finished with a .306 ERA on his way to winning twenty games, throwing six shutouts, and finishing second in voting for Rookie of the Year.

The 1953 season may have been his finest overall, but baseball fans most remember Haddix for pitching 12 and 2/3 perfect innings against the Braves on May 26, 1959, before teammate Don Hoak's fielding error ended the streak and ultimately set up the loss.

Many consider Haddix's effort to be the best pitching performance in Major League history due to how dominant he was throughout the game.

Said Harvey afterward, "I could have put a cup on either corner of the plate and hit it."

His legacy, combined with this being a short print rookie makes it a pricey card in high grade. From 1950 to 1956, Yogi Berra was clearly in the midst of his prime, winning three MVP awards and never finishing worse than 4th in the voting process.

By the time the 1953 season rolled around, Berra already had five World Series rings and one of those MVP awards to his name and was a fan favorite across the nation.

A Yankee legend and one of the greatest catchers of all-time, Berra goes down in history as one of the most humorous, fun-spirited, and lovable players to have ever stepped on the field.

Of all his cards, this is one of my favorites. 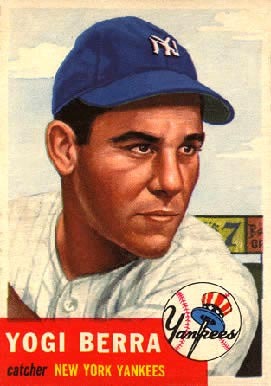 Willy Miranda (note the misspelling on the card) played for nine seasons in the Major Leagues and was known for his sharp glove at shortstop.

Born in Valesco, Cuba, Miranda bounced around from team to team for most of his career before finally settling in as a full-timer with the Baltimore Orioles from 1955 to 1959.

Miranda was also a member of the Yankees during the 1953 season but unfortunately did not make the postseason roster for their title run that year.

Being the third-from-last card in the checklist and a short print makes his 1953 Topps issue especially tough to find in high grade. Whitey Ford raised eyebrows when he broke onto the scene in 1950, winning his first nine games on his way to finishing second in Rookie of the Year voting to Boston's Walt Dropo.

Ford missed the 1951 and 1952 seasons because of his service in the Army during the Korean War but wasted no time returning to business in 1953, winning eighteen games and helping the team to a World Series victory.

This particular card boasts beautiful close-up imagery of the Yankee legend following through on a pitch.

One of the most successful Yankee pitchers of all-time, "The Chairman of the Board" was a ten-time All-Star, six-time World Series Champion, and Cy Young winner known for his ability to pitch during high-pressure situations.

The New York native spent his entire 16-year career and his cards remain among the most popular of the vintage era. A four-time All-Star and four-time World Series Champion, Johnny Podres was vital to the Dodgers success throughout the 1950s and 1960s.

While he may not have ended his career with a Hall of Fame resumé, his performances in the postseason were among the best in the history of the game.

He especially seemed to kick things up a notch during World Series games as he turned in a 2.11 ERA allowing only 29 hits over 38 and 1/3 innings.

Podres is perhaps most notable for his legendary performance during the 1955 World Series, the only title the Brooklyn Dodgers won before moving to Los Angeles.

Down 2-0 versus the Yankees, Podres tossed a complete game victory in Game 3 and finished things off in stunning fashion in Game 7 with his 2-0 shutout to clinch the title.

For his efforts, Podres became the first-ever World Series MVP and his rookie card is remains among the most desirable in the set due to his legacy. 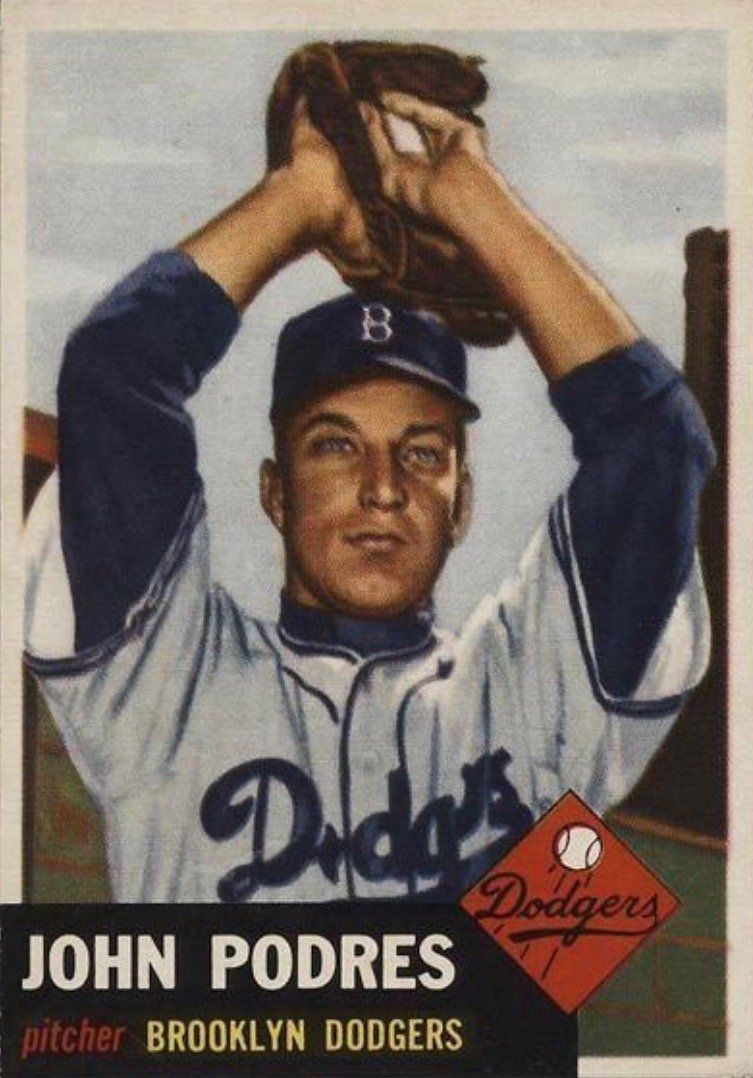 While the 1952 Topps baseball card set may be regarded as the company's most iconic, the 1953 set is still a favorite among many collectors because of its beautiful imagery and strong line-up.

So, there are really only 274 cards in this set.

Also of interest, ten cards from Series 1 and 2 were not printed along with their counterparts and were instead released in later Series.

Despite all of the confusion of printing sequence, omissions, single prints and double prints, Topps produced a legendary set that goes down in hobby history as one of the most beloved of all baseball sets.