After perusing the 1978 Topps baseball card set, one thing that sticks out in my mind is how much Hall of Fame controversy there is within its checklist.

Some guys are clearly Hall of Famers.

But, there is a crop of other guys who are borderline...

Some have been fortunate enough to have received the Cooperstown nod from the Veterans Committee.

And then there are others, seemingly just as deserving, who still haven't received the call.

Fortunately, I don't have to make those close calls of who gets into the Hall of Fame and who doesn't, and instead, I can focus on their baseball cards. Love them or hate them, 1990 Pro Set football cards will always be known for the incredible amount of errors and variations scattered throughout the set.

To achieve its vision of being a "living set," the company was constantly updating, revising, removing, and replacing various cards.

While ambitious in spirt, that body of work ultimately resulted in one of the most notoriously variation-laden sets in hobby history.

And there are likely to be some undiscovered variations still lurking out there that will keep master set collectors on their toes for years to come.

In this guide, I'll run through the 15 most valuable that I could find. 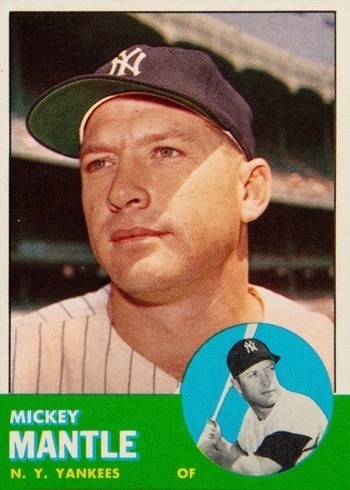 When it comes to my favorite cards of the 60s, the 1963 Topps Mickey Mantle is high on that list.

There is nothing inherently special about it as it wasn’t a short print, there weren’t multiple variations, nor was the 1963 season itself one of his finest.

Each of the design elements works seamlessly together to make the card visually pop as loudly as a Mantle longball headed for the seats beyond the outfield wall.

Few Mantle cards are as instantly recognizable as this one. Believing that card designs had grown a bit dull, the 1989 Upper Deck baseball card set kicked things up a notch to take the hobby by storm.

To deliver a better collecting experience, Upper Deck emphasized quality and innovation to include design features such as:

To help cover the cost of such a high-caliber product, Upper Deck packs were priced at a premium to the rest of the competition, but collector demand was sky-high regardless.

An iconic set, these cards changed the game and set a new standard of quality throughout the hobby.

And in this guide, I’ll run through the 13 most valuable.