For years, Wade Boggs rookie cards seemed to fly under the radar.

They weren't considered vintage (pre-1980 by most collectors' standards).

And they weren't considered as "junky" as some of the massively overproduced cards of the late 1980s.

They were somewhere in between and were often overlooked.

But things have certainly changed with the resurgence in popularity of key rookie cards of the 1980s.

As a result, Boggs rookies have seen a healthy uptick in attention and value.

His Topps rookie can sell well above $1,000 in top grade...something that used to be unthinkable.

It appears finally that Boggs's rookie cards are getting the attention they deserve.

And this guide, I take a detailed look at each of them one by one.

As you'll see later on in this article, Boggs had several other oddball cards from 1983 but in terms of mainstream issues, there are just three: Donruss, Fleer, and Topps.

I always found it disappointing that he wasn't included in the O-Pee-Chee set, as were the other two major baseball card rookies in 1983, Ryne Sandberg and Tony Gwynn.

These Wade Boggs rookies remain some of the most coveted rookie cards of the 80s alongside those of Ken Griffey Jr., Cal Ripken Jr., Rickey Henderson, Sandberg, and Gwynn, to name a few.

To start things off, let's take a look at Boggs's 1983 Donruss card: Distinction: Donruss jumped into the baseball card market in 1981 after the court system finally broke Topps' stranglehold as the only company with the rights to produce them.

A couple of years later, the company would release Wade Boggs' rookie card.

Along with rookie cards of fellow Hall of Famers Tony Gwynn and Ryne Sandberg, this is one of the keys to the set.

Front Design: The designs of the Donruss sets of the early 1980s are all fairly simple and straightforward, but their 1983 set design is one of my personal favorites.

The nameplate at the bottom in the form of a baseball bat complemented by the team name cradled inside a mitt adds a nice creative touch overall.

And you have to love the full color action shot of Boggs taking a cut at the ball.

I did always find it strange that Donruss listed him as a DH after he appeared as a DH in only three of the 104 games in which he played in 1982.

Most of his time was spent between first base and third base that year, which you'll see below Topps more correctly noted on their own Boggs rookie.

Back Design: The reverse side uses a horizontal layout and features his personal information, statistics and career highlights.

Donruss spoke highly of Boggs' promise as an excellent hitter, something the baseball world would see materialize in full force over the coming years.

A career .328 hitter, Boggs was especially dominant throughout the 1980s as he picked up five batting titles along the way. Condition Issues: The biggest challenge collectors face with this card is centering.

Quality control was decent but the centering of the front and back is typically the biggest hurdle preventing this card from achieving PSA 10 status.

Of the three mainstream Boggs rookie cards (Donruss, Fleer and Topps), this one is the easiest to find in PSA 10 condition with roughly 22% of those graded (1,278 out of 5,921) having received the gem mint grade. Distinction: Boggs' Fleer rookie card is again one of the key rookie cards in the set with those of Tony Gwynn and Ryne Sandberg.

It's twice as difficult to find in PSA 10 condition than its Donruss counterpart, relatively speaking, but the Fleer rookie only carries about a 20% premium in price.

While 22% of the Donruss cards that PSA has graded have received a PSA 10 grade, the company has given the gem mint grade to just 10% of the total number of Fleer rookies (674 / 6,758) in their population report.

Front Design: The front of the card contains a nice full-color shot of Boggs hoisting a bat over his shoulder with a clear blue sky in the background.

The dull, grey borders of the 1983 Fleer design leave many collectors with mixed feelings about this set.

Aesthetically, it may be a bit more basic than his Donruss and Topps cards, but it's hard to complain too much about a Boggs rookie card.

Back Design: The reverse side has all of the traditional design elements you could expect from a Fleer sports card from the 1980s.

His Minor League stats dating back to his Single-A days with Elmira, the trivia question, and the small headshot in the upper-right corner leave plenty for the collector to take in and enjoy. 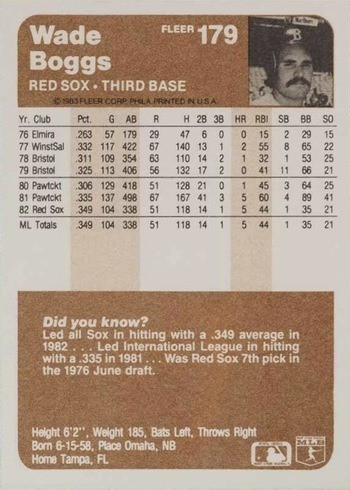 Condition Issues: Centering is also a tough challenge with this card.

While roughly 22% of his Donruss rookie cards that PSA has graded have received a Gem Mint 10 grade, the company has given the same grade to just 10% of the total number of Fleer rookies in its population report.

But, despite the much greater difficulty of receiving a PSA 10 grade, the Fleer rookie only carries around a 20% premium in price versus the Donruss. Distinction: Easily the most desirable of his three mainstream rookie cards, Boggs' 1983 Topps issue has significantly increased in value over previous years.

While you could typically see this card selling for $300 in top grade several years ago, they've sold for over $2,000 in recent times but have since started to trend downward again.

Front Design: For its 1983 set design, Topps paid tribute to its 1963 set design with full images of players in the center offset by encircled headshots in the lower-right.

The red, white, and blue color scheme on this card further offers a bit of patriotic look and feel

Topps also listed him as both a first baseman and third baseman as he split time nearly in half between the two positions during the 1982 season.

Back Design: The reverse side is printed with a horizontal layout and is jam-packed with Boggs' personal information, statistics, and highlights from his rookie campaign in 1982.

Topps certainly didn't waste any space trying to give collectors as much information about the budding superstar as they could reasonably fit on the back. Condition Issues: Centering is again an issue, as are print bubbles from time to time.

The difficulty of that grade mixed with Topps' popularity are the key drivers of the impressive price tag of this card in a PSA 10 grade.

While each of the During the 1980s, some of the programs from the annual All-Star game included fold-out pages with cards on them for those players fortunate enough to be included on the ballot that year.

Despite finishing the season with his first of five career batting titles (.361) and his first of eight career Silver Sluggers, Boggs did not earn enough votes to make the AL roster.

Instead, fellow Hall of Famer George Brett and the California Angels' Doug DeCinces represented the American League at the hot corner. To celebrate the 1983 Red Sox season, the Boston Herald released a 50-stamp set and a wall chart upon which collectors could place them. The Boston Herald wasn't the only entity to feature Boggs in a stamp set for the 1983 season as Fleer also released a 224-stamp set that included the future Hall of Famer.

Since re-entering the baseball card market in 1981, Fleer was doing whatever it could to compete with Donruss and Topps so stamps seemed like a way to possibly stand out from the crowd.

However, it appears that 1982 and 1983 were the only years that Fleer produced sets of baseball stamps so these must not have been big sellers for the company. Here is another example of Fleer releasing a specialty product to appeal to more collectors.

They could've chosen a more appealing picture to go with instead of a shot of Boggs botching a grounder.

At the same time, I think it makes the sticker funny and a bit more interesting in a way.

The 1983 KG Glossy set is fairly obscure and not much is known of its origins.

Some have speculated it may have been an unreleased Topps test set.

But the more prominent belief is that a gentleman by the name of Kenny Garshewicz produced this unlicensed set and distributed it over multiple years through a mail-in program.

It's tough to say what a value might be for this card as I don't believe PSA will grade cards from this set anymore. O-Pee-Chee and Topps also had their own sticker sets that featured similar designs on the front sides. As you can see, the front of the Topps sticker is the same, but there are glaring differences in the reverse design.

Interestingly, not all stickers within both the O-Pee-Chee and Topps sets had the same design as Boggs's sticker.

Some were foil, some featured players in an oval-shaped design, some were split in two (an upper and lower half), and some, like Rickey Henderson, were broken into several sections.

Henderson had six separate stickers that, when combined, showcased him sliding into a base for one of his all-time record stolen base count.

Wade Boggs goes down in history as one of the greatest contact hitters of all time as he was seemingly always in contention for a league batting title.

Boggs spent much of his career involved in a constant debate of who was the better hitter of his era, Tony Gwynn or him.

What isn't debatable is that both legends are among the very best of the live-ball era.

Throughout 18 seasons in Major League Baseball, Boggs would achieve the following:

An easy choice for induction into the Hall of Fame in 2005, Boggs's legacy as one of the all-time greats should keep the popularity of his rookie cards in demand for years to come.