Growing up in the late 1980's, there was nothing more that my friends and I would rather pull from a pack than a Ken Griffey Jr. rookie card.

That tells you all you need to know about just how much the card market ballooned in the late 1980's with massive print runs.

Regardless, these cards will always hold a special place in the hobby and some of them are surprisingly still worth quite a bit.

In this article we'll take a look at the 25 most valuable.

Bowman had not released a set since 1955 after they were bought out by their largest competitor, Topps.

But Griffey Jr. and the hype that surrounded him helped to immediately increase the popularity of this set.

The cards were larger than normal, measuring in at 2 1/2" x 3 3/4", and featured full color photography and facsimile signatures of the players.

A young Griffey Jr. poses with a rather serious look, kneeling in his Mariners uniform.

In recent years, this card has soared to become one of the most valuable baseball cards of the 1980s. 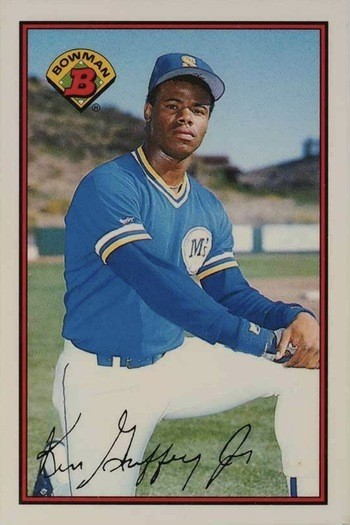 Topps released this unusual test issue in 1989 that is a die-cut Griffey Jr. head that was meant to be stuck to a flat surface of your choice for display.

Notice the hole in Griffey's cap--that's where the little suction cup would be used to secure him to a window or wall.

This oddball item is not really a true baseball card but collectors go wild for them.

On the rare occasion these come up for sale, they can sell for huge money. 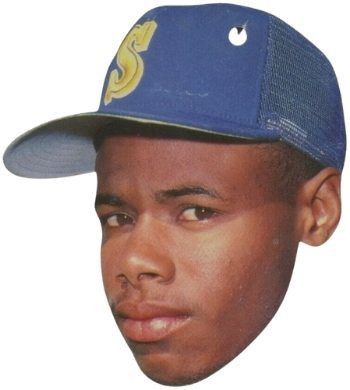 Much like the Bowman and Topps Tiffany releases, Fleer also produced a premium version of their cards that year.

The design is exactly the same as the base card but the card stock itself is higher quality with a glossy look and feel.

Because a smaller amount of these were produced and because centering is a challenge, finding these in pristine condition can be tough. In top condition they can still go for over $500.

Like other premium versions from the other manufacturers, these cards are easily distinguished from their base versions by the glossy, sharper card stock. This small oddball set contained just fifteen cards in the checklist and had a look and feel to them reminiscent of the 1964 Topps set.

Collectors could find other big names of the era like Don Mattingly, Mark McGwire, Ryne Sandberg and others but the Griffey is by far and away the most valuable in the set.

The reverse of the card gives some interesting projections for his different rookie cards and even shows an image of his Donruss rookie in the upper right corner. Upper Deck made headlines when they entered the card market in 1989 with a more premium quality product.

And they chose wisely in making Griffey Jr. card #1 in the set.

Its importance to the hobby cannot be understated and it's arguable that this is the most important modern baseball card you can find.

Sure, there are others that are more expensive, but this card helped define an era of card collecting craziness during the late 1980's.

This is probably the most recognizable Ken Griffey Jr. rookie card of them all. These are certainly one of the more odd Ken Griffey Jr. rookie issues.

And some collectors may even debate if they're truly rookie "cards" or not since they're actually magnets.

ln 1989 and 1990, a company called Phoenix IND. based in Fetus, MO, distributed these magnets that featured many different baseball and basketball players in individual plastic bags.

For the collector who likes oddball issues like these, this is one of the more rare and pricier ones you'll find. Remember the 1955 Bowman set with its television set design?

Well, in 1989, Bowman used a similar style in its subset of four cards that featured fathers and sons who both played in the Majors.

The Griffeys, along with the Ripkens, Alomars and Stottlemyres were showcased in a modern (at that time) television set design.

You can find this card in the standard 1989 Bowman set but the Tiffany version is much more expensive. A few years ago, you could find these in PSA 10 condition for less than $50.

Their values have since skyrocketed since his Hall of Fame induction in 2016.

Some collectors consider the design to be a bit dark and bland overall.

But I don't mind. 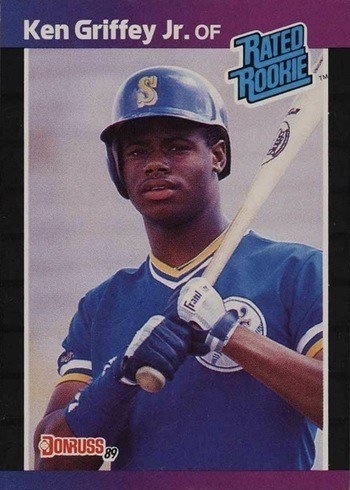 Along with the flagship Donruss set, Griffey also appeared in the smaller (336 cards in total) "Baseball's Best" box set that Donruss released through retail stores that year.

The design is much brighter than the flagship issue and features a great action shot of The Kid at the plate.

It's not quite as valuable as his "Rated Rookie" but still has decent value in top condition. Food issues are typically not as popular as mainstream cards since they were typically only released in certain regions.

But, the 1989 Mother's Cookies Griffey cards are still great cards.

They were distributed as singles in packages of Mother's Cookies and there are four different Griffey's to collect.

The first card in the set shows The Kid posing with his arms crossed. Classic's purple version is much more interesting to look at than the orange as Griffey Jr. is showcased in an action shot at bat.

I'm not sure if they're necessarily more rare than the orange but they do command a higher price, on average.

Perhaps it's just because they're a bit more fun to look at. Part of a smaller 42 card set, this Griffey card packs a lot of punch.

The color scheme really makes the card pop as does the great shot of Griffey taking a huge cut.

It's not hard to find but it does land a higher value than his other Score issues on this list. Donruss also released a "The Rookies" set in 1989 that was pretty much the same concept as Topps Traded.

The set contains 56 cards but Griffey's is by far the key.

The design is much like the other Donruss issues that year but features a "The Rookies" logo in the upper right corner. Fleer has always been known for its unique designs but I was never really much of a fan of their 1989 layout.

The grey pinstripe background is instantly recognizable but it's just a bit boring, in my opinion.

And if you know anything about the controversy surrounding the Billy Ripken card in this set, you'll realize this is the only set in which Griffey's card isn't the major highlight. 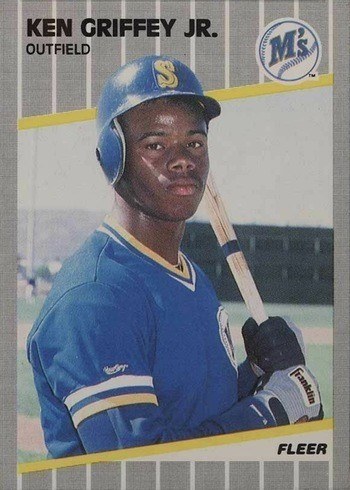 Considered to be one of his most popular rookie cards, the 1989 Topps Traded issue features a young Griffey staring confidently with a bat over his shoulder.

I always liked the 1989 Topps design with the floating name banner and cursive team name in the lower right corner.

These are quite easy to find but in pristine condition they can still go for over $30 making them among the more affordable mainstream Ken Griffey Jr. rookie cards. The orange version was the first of the two and is fairly straightforward in design. I've always liked the artwork of the 1989 Score Masters design.

And Griffey's card, in particular, really captured his trademark swing in a unique format.

Not as popular as his other major releases, you could find these at hobby shops or by sending in for them in the mail.

It's one of a very few Ken Griffey Jr. rookie cards to feature artwork of the rising start. Like Donruss "The Rookies" and Topps Traded, Score also released this smaller box set outside of their main release.

Griffey is shown following through on a swing in a great action shot. 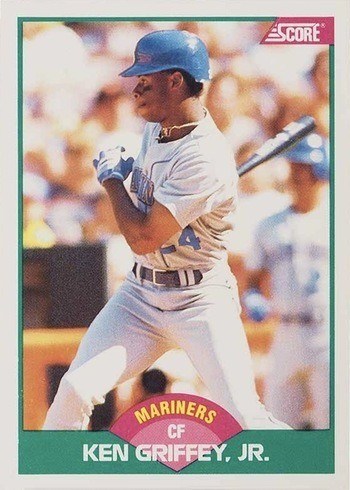