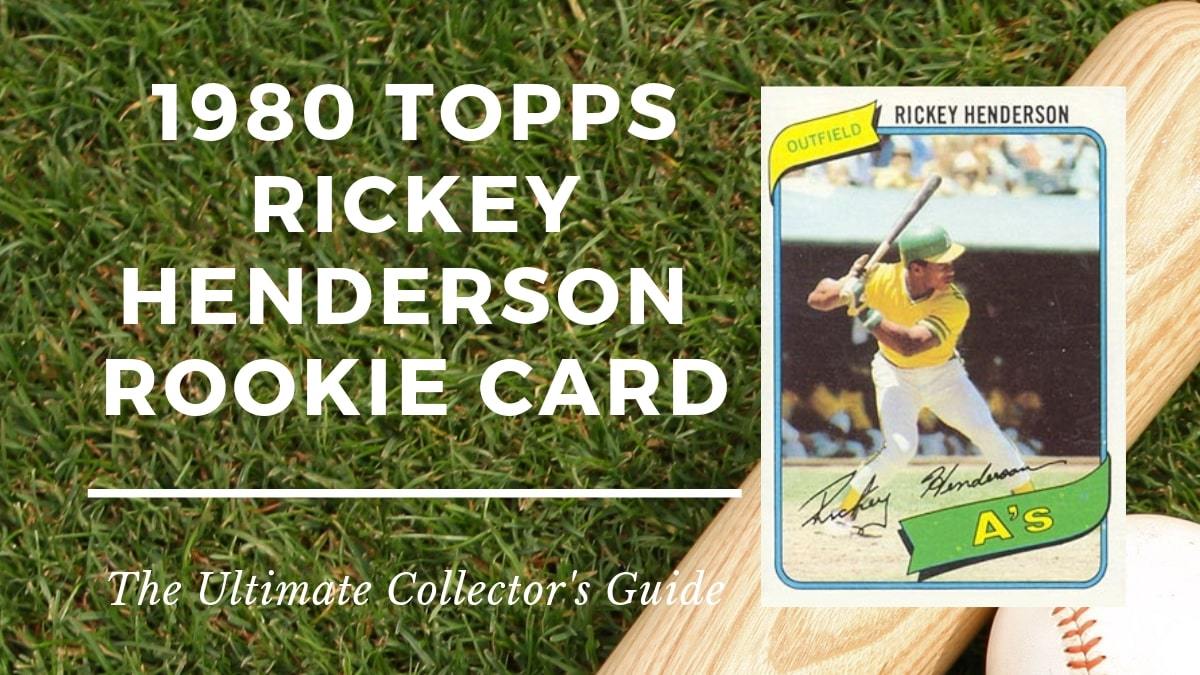 The 1980 Topps Rickey Henderson rookie card is one of the most recognizable and sought after cards of the 1980's.

Sadly, few cards printed in the 1980's are worth anything these days.

But this is definitely one of them...

In mint condition, this card can go for big bucks.

And in this guide we'll discuss everything you need to know about collecting Rickey Henderson rookie cards.

Distinction: This is Rickey Henderson's only recognized mainstream rookie card.

Henderson did also appear on a couple of minor league cards in 1977 and 1999 (which I'll get into later), but his 1980 Topps card is his only true rookie card.

Other cards in the set can be worth some decent money in pristine condition, like Nolan Ryan for example, but Henderson's card is by far and away the most expensive.

That makes it the indisputable key 1980 Topps card and one of the last great vintage rookie cards alongside the 1979 Topps Ozzie Smith, 1978 Topps Eddie Murray and 1978 Topps Molitor/Trammel rookies..

Design: The 1980 Topps design is instantly recognizable by two banners that float in the upper left and lower right corners.

Each banner featured the player's position and team name, respectively.

Henderson's name in all capital letters sits along the top border of the card while a nice image of him at the bat sits right in the middle.

A facsimile signature at the bottom of the card rounds out a nice-looking card, overall.

Henderson had a rather unique batting stance and his rookie card does a nice job of showcasing it. Reverse Side: The reverse side of the card is printed horizontally and features a blue color scheme.

His card number, position, name and team affiliation rest at the top of the card while his personal information is shown at the bottom.

The middle of the card is broken into three sections:

I really like the reverse design as it packs in a lot of information but is easy to skim through. Condition Issues: Centering will usually be the biggest condition obstacle that you'll find with this card.

This is a common issue throughout the entire 1980 Topps set.

The first thing people usually ask is: how much is a Rickey Henderson rookie card worth?

And if you find one graded by Professional Sports Authenticators (PSA) in PSA 10 Gem Mint condition then you're looking at a five figure price tag.

The following are typically what you would expect to buy or sell this card in each of the different conditions according to PSA's price guide:

So, as you can see, this card can be worth a ton of money if it's in flawless condition.

Rickey Henderson goes down in history as arguably the game's greatest leadoff hitters of all-time.

Moreover, his blazing speed helped him set the record for most career stolen bases.

The guy could flat out run...

If he got on base, odds are he was going to steal.

Over his 24-year career, Henderson would play for 9 different teams.

He had a unique love for the game and was notorious for giving his all.

Henderson was once quoted as saying, "If my uniform doesn't get dirty, I haven't done anything in the baseball game."

Some of his other notable accomplishments include:

Henderson was an amazing talent and will forever be remembered for his unmatched abilities on the base paths and in the lead-off hitting spot.

That's why Rickey Henderson rookie cards remain some of the most sought after rookie cards in the baseball card hobby today.