When it comes to cards produced in the 1980's, the four Cal Ripken Jr. rookie cards easily stand out as some of the most desirable.

And you may be surprised at just how valuable they can be...

Most cards produced in the 1980's aren't worth much at all because of overproduction.

But in top condition, Cal Ripken Jr.'s rookie cards can be worth several hundred dollars.

Ripken left a legacy as the most durable player of all-time with incredible hitting power for a shortstop.

He was simply one of the best shortstops to ever play the game...

And this guide I go over everything you need to know about collecting his rookie cards.

In the vintage segment of baseball card collecting, most players have only one rookie card to their name.

That's generally because there was just one major company printing their cards.

Prior to 1981, Topps dominated the baseball card market but that changed in 1981 when Donruss and Fleer started printing cards of their own.

And in 1982, those three companies would all print rookie cards of then future Hall of Famers Cal Ripken Jr.

These rookie cards would go on to be some of the most beloved of the decade alongside guys like Tony Gwynn, Ken Griffey Jr., Don Mattingly and more.

Here we explore all four of them. Let's go in alphabetical order and start with the 1982 Donruss version first: 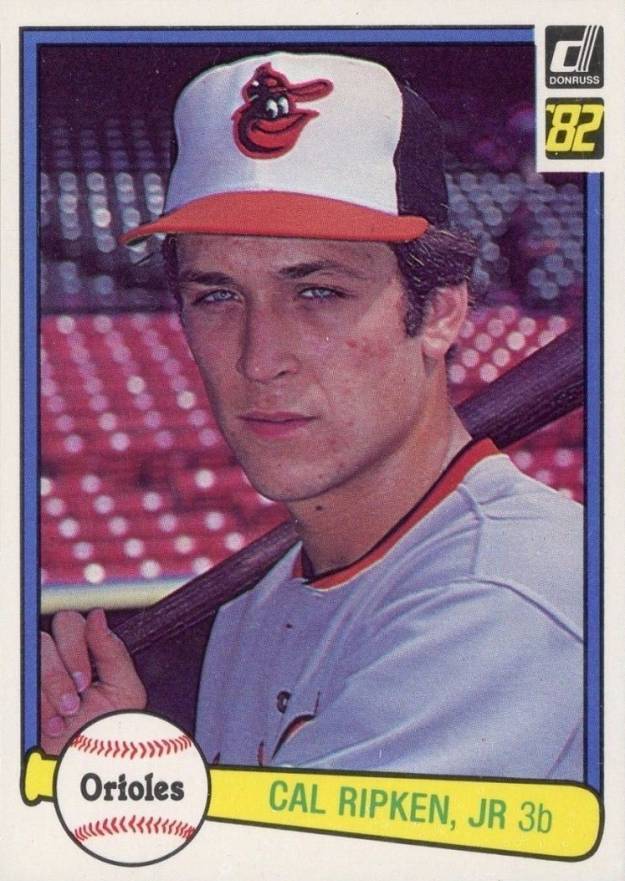 Distinction: This is the least desirable of Ripken's rookie cards and that is reflected by its relative value compared to the others. But it's easily the key to the entire set.

Front Design: I actually think his 1982 Donruss rookie is the best-looking of all four.

From the Donruss logo and "'82" in the upper right to the ball and bat graphics across the bottom, this card just seems to pack a bit more aesthetic pop.

Back Design: The reverse side of the card was printed horizontally and features his personal information, statistics and a nice highlight section documenting his promising talent he displayed in the Minors.

The rich blue background was also easy on the eye and made reading the different bits of information a breeze. 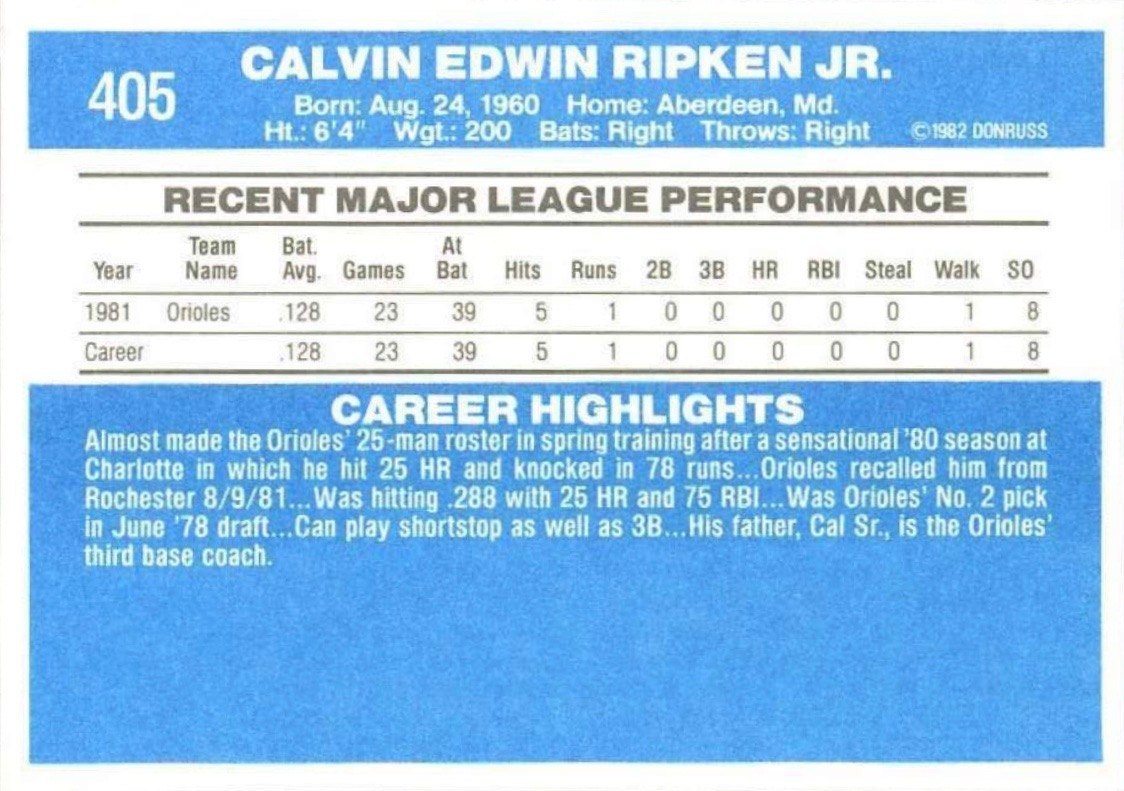 Condition Issues: The biggest challenge collectors face with this card is centering. Other than that, the print quality of these cards was pretty decent as they are far easier to find in PSA 10 condition, another reason they are relatively cheaper. 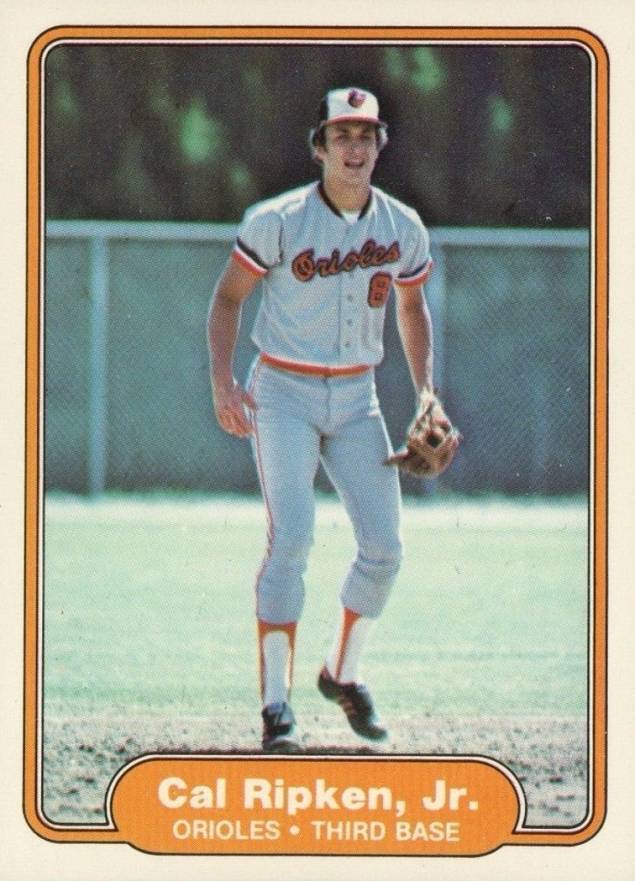 Distinction: This is the key and most desirable card in the 1982 Fleer set. The Pete Rose card and Lee Smith rookie are also highly desired but Ripken's card still holds the top spot without a doubt.

Number: Like Donruss, Fleer also included 660 cards in their set and Ripken's rookie is card #176.

Front Design: The front of this card can seem a bit bland at first glance.

The image of Ripken fielding is nice but the orange inner border and nameplate at the bottom give the card a bit of a dull feel.

But, Fleer designs in the 1980's were always kind of that way and I think that's a good thing as their cards were always easily recognizable.

Back Design: The reverse side contains a multi-colored design with Ripken's personal information and playing statistics from his days all the way back to 1978 when he first entered the Minor Leagues.

I think that was a great move on Fleer's part to show his Minor League stats, too, as it gives collectors a glance at how his progression was underway from the start. Condition Issues: Centering is also a tough challenge with this card and is typically the key component that will prevent a pack fresh card from being graded at the PSA 10 level. Distinction: This is one of two Ripken rookies that Topps produced in 1982 along with their "Traded" series.

Usually Ripken's rookies are the most valuable in any given set but that's not the case here: Lee Smith's 1982 Topps rookie card is actually worth a bit more.

Both of them were also billed as "Future Stars" at the time but neither panned out as Schneider only pitched one season during 1981 and Bonner's career lasted only four years.

Back Design: The reverse side side has a nice dark green color tone and features only the card number, team and personal information of all three players.

There just wasn't enough room to display any of their statistics as well. Condition Issues: Centering is a tough issue with this card but you also see them many times with print marks and bubbles. Distinction: Ripken's Topps Traded rookie outpaces them all in terms of value and desirability.

The "Traded" series was Topps' way of introducing players who had been called up from the Minors or traded during the regular season.

Number: Because this set featured only that small subset of players who were traded or called up, there are only 132 cards in total with Ripken's being #98T.

Front Design: I said earlier that I may like the Donruss rookie the most in terms of design but I think I'll change my mind and go with this one.

It just has that classic Topps look and feel to it and that image of a young Ripken posing determined at bat with the field and blue sky in the background gives this card amazing eye appeal.

The orange and red coloring of the graphics that border the image along the left swooping downward are also a nice touch.

Back Side: Topps produced a lot of cards in the 1980's with these dark backgrounds on the backside and this is a clear example.

The personal information and stats are included as well as a short tidbit about him at the bottom which reads awkwardly: "Cat belted Homer his 1st At-Bat of season, 4-5-82."

I also like the cartoon trivia up at the top documenting a couple of neat facts about fellow Hall of Famers Phil Niekro and Willie Stargell. 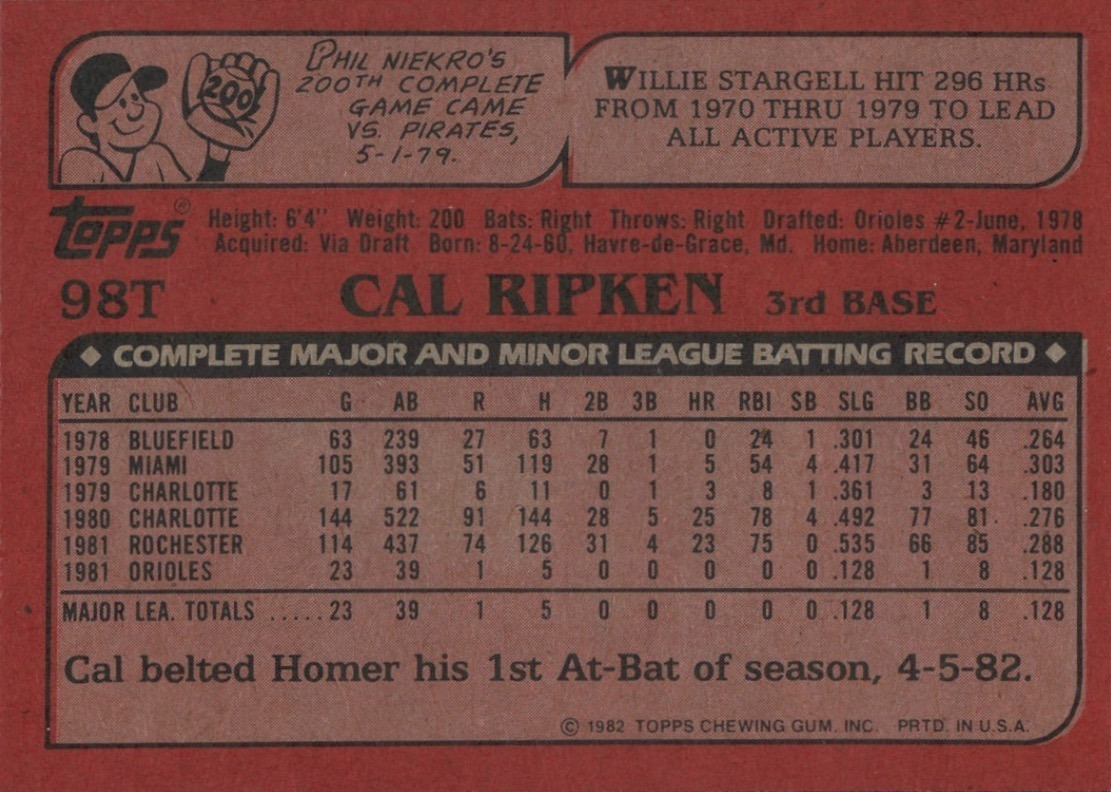 Condition Issues: The quality of the cardboard stock used for these cards wasn't the greatest so they're often easily dinged up.

And like the others on this list, centering is a huge obstacle to landing this card in top grade.

Cal Ripken goes down in history as one of the game's greatest shortstops and players of all-time.

Some may even argue that he was the greatest shortstop to ever play and that would be tough to disagree with.

He was a great defender but his ability to hit for power was not something usually seen in shortstops at that time.

That, and his record for consecutive games played with 2,632 are what we will always remember him by the most.

Over his amazing career, he would accomplish the following:

In his first year of eligibility in 2007, Ripken was inducted into the Baseball Hall of Fame.