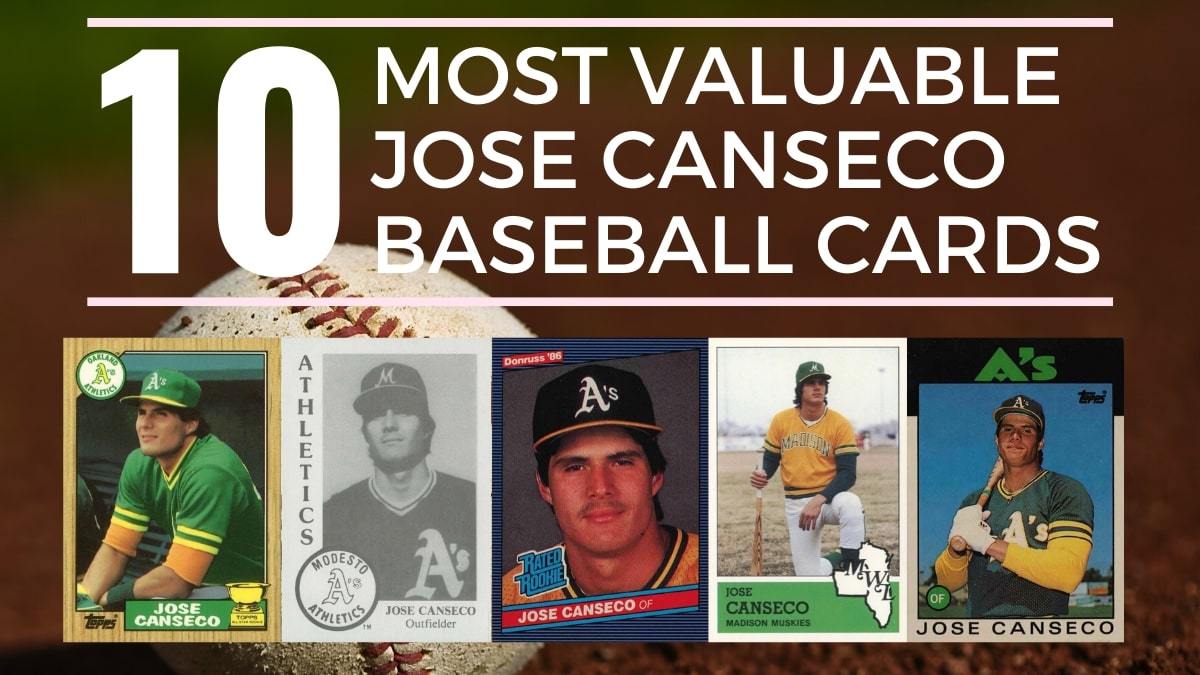 During the late 1980s, Jose Canseco baseball cards were absolutely on fire...

He and fellow "Bash Brother", Mark McGwire, looked like they were on track to go down as the greatest slugging duo in history.

However, the baseball card bubble of that era would burst and we'd later learn that he was tied to the PED scandal that rocked the sport.

While both of these events sent the values of his cards tumbling, you may be surprised that many of them can still be worth money today.

And in this guide, I look through the 10 most valuable.

Before I get started I just want to clarify that all of the cards on this list were produced in 1991 or earlier.

There are other Canseco cards produced afterwards like the 1996 Select Certified, 1998 Donruss Crusade and many autographed cards that are still being produced today that can be worth big money.

However, I wanted to draw the line somewhere and felt 1991 was a good stopping point since most will be able to identify with his cards of that time period.

Now that we got that out of the way, let's get started...

From 1955 to 2005 the Chong family owned and operated the Sequoia Market in Ceres, California.

From 1975 to 2004, the Class A affiliate of the Oakland A's played less than 5 miles away in nearby Modesto, California.

Over the years, the Chong company produced many promotional baseball cards centered around the local baseball team and Jose Canseco appeared in the 1984 set.

Today, this Minor League card can fetch hundreds of dollars in top grade.

You have to be careful when buying or selling this card, though, as it has been known to be frequently counterfeited. 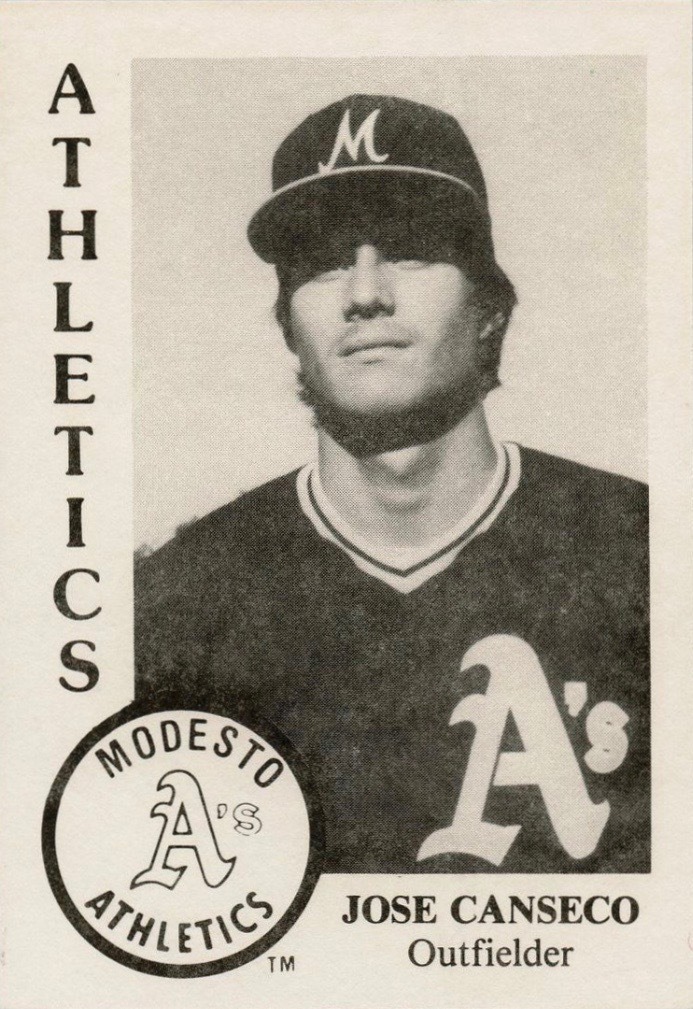 In this hobby, certain sets stand out as being the first to set a trend and 1991 Donruss Elite is one of them.

Limited to print runs of 10,000 each, these inserts are now recognized as the first cards to feature serial numbers to denote their relative rarity.

Back then, this creative concept helped Donruss stand out from its competitors in a market that had become grossly overcrowded.

Today, serial numbered cards are a standard in the hobby that many companies use to manufacture scarcity. The 1986 Topps set is one of the most recognizable of the decade with its team names spelled out in large, block lettering across the thick black border across the top.

While Canseco didn't make it into the regular 1986 Topps set, he was included with other big names like Bo Jackson and Barry Bonds in the 1986 Topps Traded set.

The card exhibits strong eye appeal as the green and yellow of his Oakland A's jersey are perfectly complemented by the bright blue sky in the background.

High-grade copies of the base version will be worth around $40 but the Tiffany version, the premium factory set that Topps issued that year, can be worth around $250 or more in top condition. The 1991 Topps Desert Shield set has some interesting history behind it that makes it one of the more challenging sets of the modern era.

During the Persian Gulf War, a limited number of them were distributed to soldiers stationed overseas.

Combined with the low number of sets that were created, even fewer survived in high grade as you can imagine the amount of damage they were exposed to during a military conflict.

In design, they are identical to the regular Topps baseball cards produced that year but are distinguished by the Desert Shield logo in the upper-right corner on the front.

The difficulty of finding these in high grades can make them quite expensive. 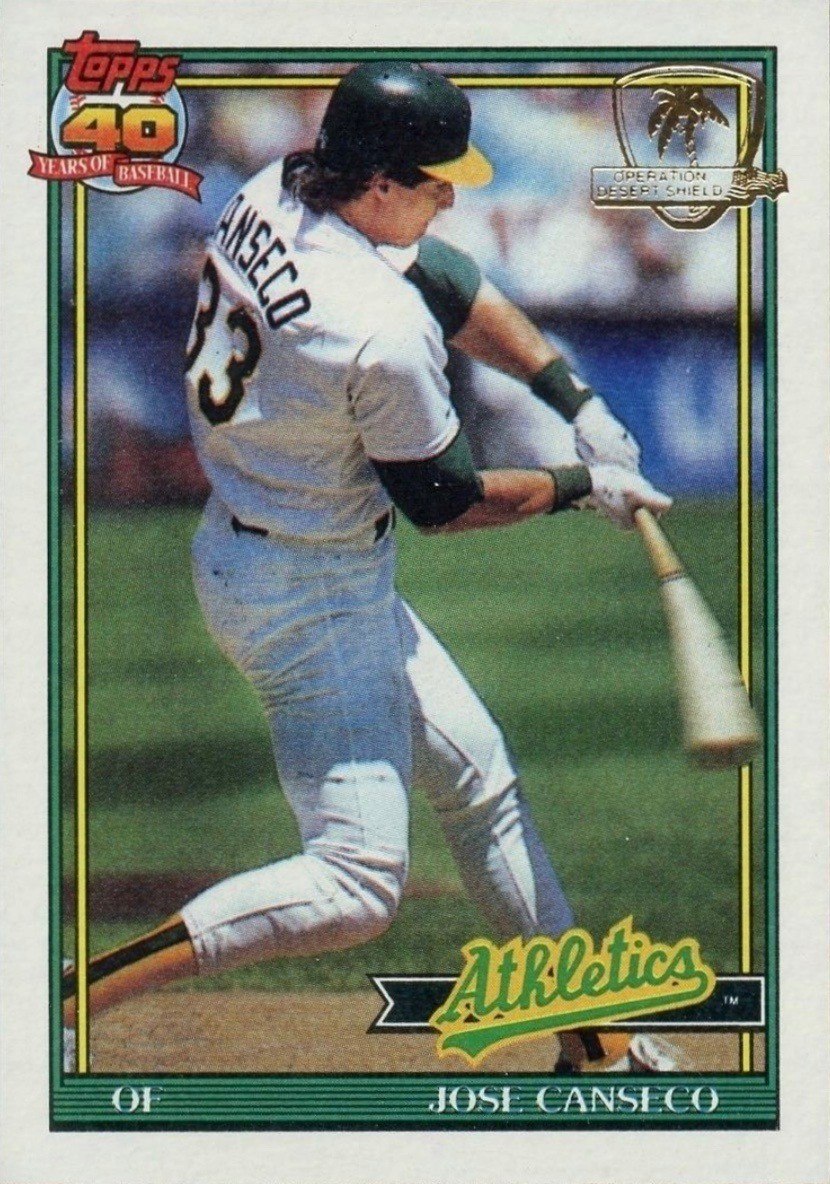 After smacking 37 home runs and driving in 101 runs during the 1990 season, Canseco earned Silver Slugger honors and was named to his fourth All-Star game.

As such, he's also part of the American League All-Star run in the 1991 Topps Desert Shield set.

Both of his cards in this set appear to be almost equally valuable in high grade. 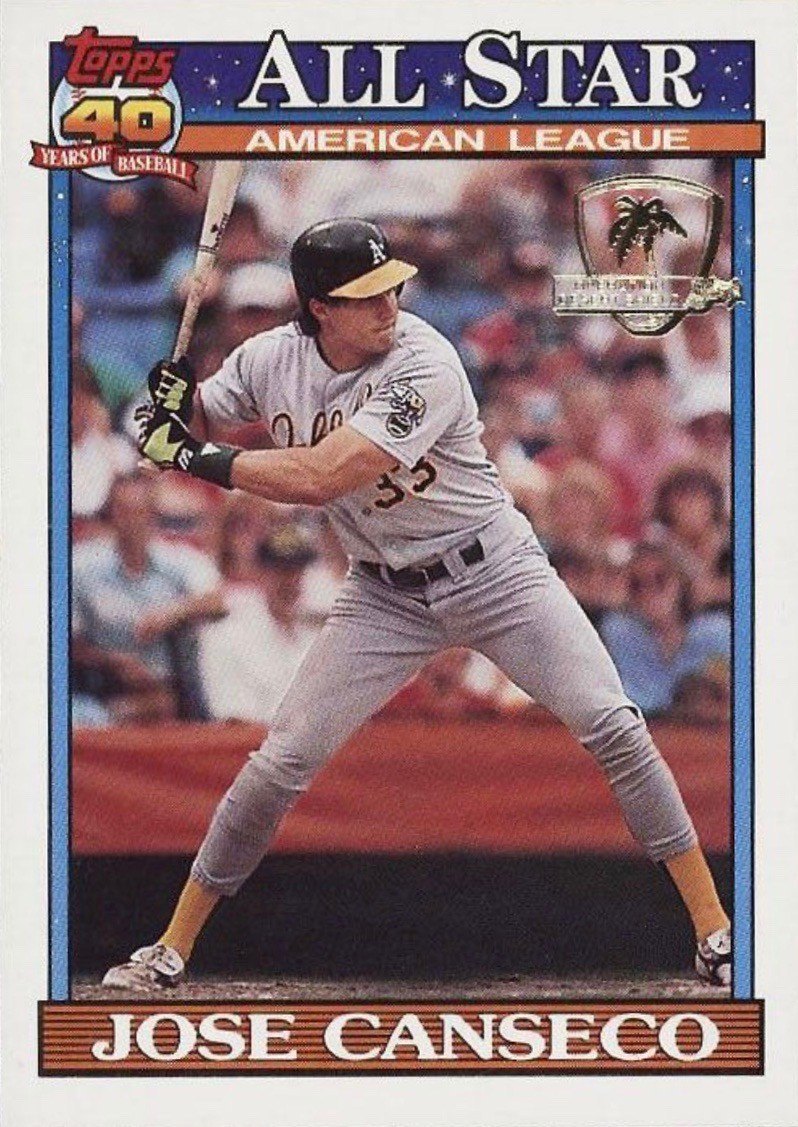 Arguably Canseco's most recognizable rookie card, the 1986 Donruss Rated Rookie continues to be one of the most sought after cards of the era.

A headshot of Canseco dominates the front of the card and is surrounded by those unmistakable striped borders.

In his first full season in the Majors, Canseco belted 33 home runs and tallied 117 RBI on his way to being named the AL Rookie of the Year.

That season launched him into the spotlight and made this card an absolute must-have during that time in hobby history. 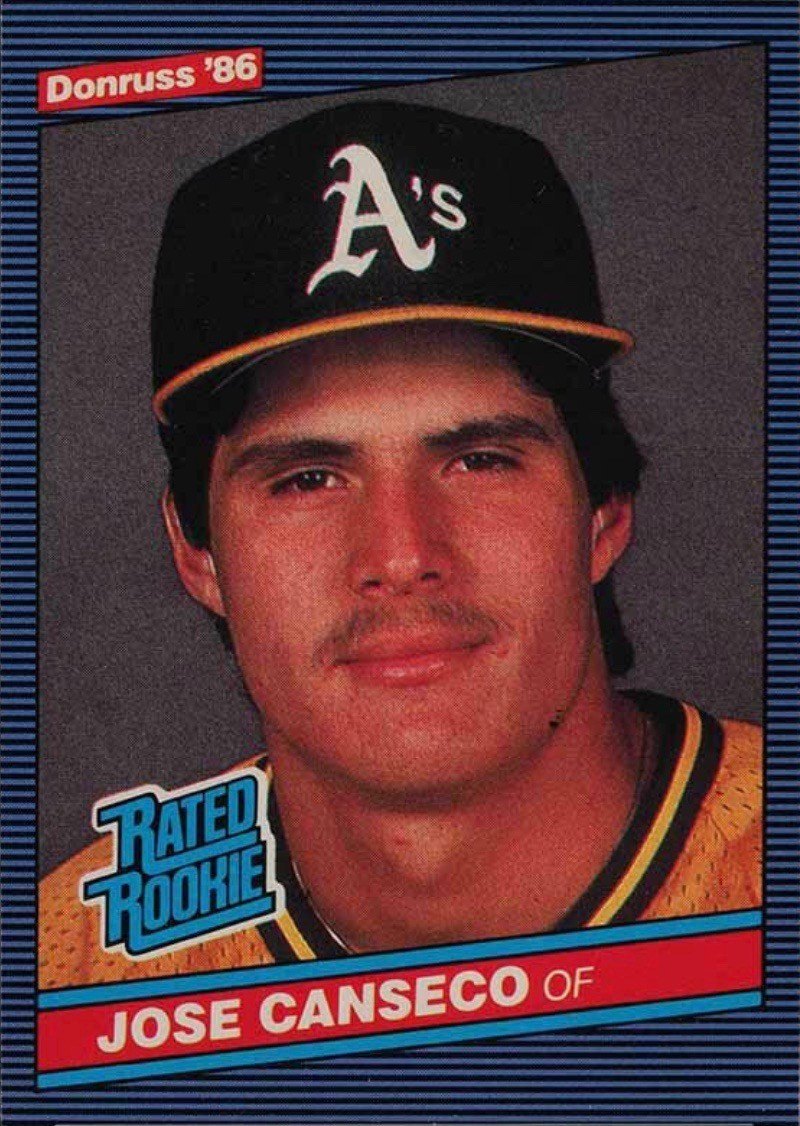 Canseco first appeared in a base Topps set during 1987 when the company released cards with those instantly recognizable woodgrain borders.

Topps planted the All-Star Rookie trophy in the bottom-right corner giving this card a boost in eye appeal.

This card and the image of a young Canseco hunched over in the dugout is one of the most iconic of the 1980s.

While the base issue can be worth a respectable $40 in top grade, the premium Tiffany version can be worth far more at a price tag of around $150 in PSA 10 condition. Fleer included Canseco and teammate, Eric Plunk, in its 1986 release as part of its "Major League Prospects" subset.

While Plunk had a solid career as a relief pitcher, especially as a set-up man with the Cleveland Indians in the 90s, Canseco is the star of the show on this card.

The dark blue borders can easily show wear and chipping which often prevents this card from achieving PSA 10 status. Established in 1985, the Hunstville Stars were the Double-A affiliate of the Oakland A's before transitioning to the Milwaukee Brewers in 1999.

The 1986 Donn Jennings Southern League All-Stars was a 25-card set that included Jose Canseco and other big names like Tom Glavine, Bo Jackson and Mark McGwire who played in the league at that time.

With the MVP title resting above, an image of Canseco walking confidently across the field dominates the card's front side.

Top grade examples of this card are not too difficult to come by and can still be had for around $100 or so. Last on our list is another Minor League issue that features Canseco as a member of the Madison Muskies, the Oakland A's Class A affiliate from 1982 to 1993.

Printed by Fritsch Cards of Stevens Point, WI, this card was one of many in the company's "1983 Midwest League Stars of Tomorrow" series.

As noted by the tri-state logo in the lower-right of the card, the Midwest League was once composed of teams from Wisconsin, Iowa and Illinois while today the league spans across Michigan, Indiana, Ohio and Kentucky as well. Canseco's legacy is one of the more complicated of any baseball player in history.

During his early playing days in Oakland, he was one of the most exciting sluggers in the game and seemed to be on course towards a Hall of Fame career when he became the first member of the 40/40 club.

Throughout the 1990s, he bounced around from team to team and was still hitting for power but wasn't quite the big name he once was.

And then, in 2005, he rocked the sport when he released a book in which he admitted to using PED as a player while also claiming that many throughout MLB did so as well.

Despite the controversy that surrounds him, Canseco did produce a list of big achievements that includes:

Canseco's reputation will forever hang under the PED cloud but what can't be argued is that he still remains an important figure in this hobby as one of the icons of the 1980s.

That notoriety helps keep his cards on the radars of many modern sports card collectors to this day.