How could anyone forget about the 1987 Topps baseball cards with their iconic woodgrain borders?

And the set was packed with rookies and stars, too...

Everyone knows they were heavily printed just like every other set during the card craze of the late 1980's.

And, yes, while most of them are basically worthless these days as a result, there are a few that can still be worth decent money.

In this guide we take a look at the 10 most valuable 1987 Topps baseball cards.

Brief disclaimer: Before we get started, I do want to make it clear that most 1987 Topps baseball cards do not have any value these days.

Like the 1987 Donruss and Fleer sets, far too many of them were printed and the market is over-saturated with them.

In order for the cards on this list to be worth much, they'll either have to be the Tiffany version (Topps' premium factory set) and/or be graded by PSA to be in perfect, gem mint condition.

Barry Bonds' career may forever be under a cloud of controversy due to the PED scandal of the late 1990's and early 2000's.

Many will actually point to this card as an example of how much his body transformed over the years from his alleged use of PED.

A young Bonds is shown taking a huge cut and sending one soaring on this rookie card, a key to the set and the most valuable in the checklist. 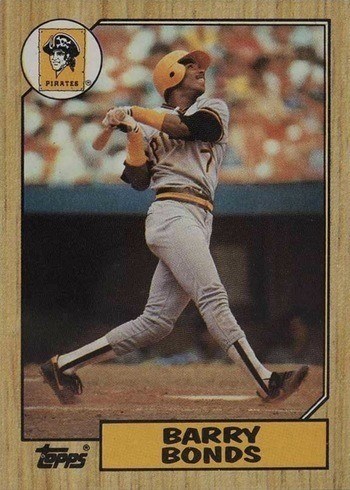 One of the greatest pitchers of all-time, Greg Maddux may not have had overpowering stuff but his ability to place the ball anywhere he wanted made him a perennial Cy Young Award candidate.

Maddux spent several quality years with the Cubs from 1986 to 1992 when he won his first of four consecutive Cy Young Awards before being signed by the Braves.

Technically, this card is part of the Topps Traded and not the Topps set but since it's one of the most sought after cards of the 1980s and Maddux is one of my favorite pitchers of all-time, I figured I'd include him. Not all of the members of the "Future Stars" subset lived up to that name.

But, Bo Jackson certainly did.

The legendary two-sport star (he also played football for the Raiders) was one of the hottest names in the hobby during the late 1980's.

He could hit for power, run, and man did he have a cannon for an arm. Although many consider the 1985 Topps to be the true Mark McGwire rookie card, many others consider his 1987 issues to be rookies as well since they were the first to feature him in an A's uniform.

Whatever your opinion may be, McGwire's 1987 Topps card has always been one of the most sought after in the set.

Like his teammate, Canseco, McGwire was also known for his enormous hitting power very early on in his career.

It's a great-looking card and features a nice image of a young McGwire standing ready to belt one. I remember everyone going absolutely nuts for this card.

The hype surrounding Canseco was huge in 1987 after he had put up some awesome power numbers during his rookie campaign the year before.

So, it would have been nice if Topps had captured him at bat instead of sitting in the dugout.

But, still it was an extremely desirable card at the time.

And it was one of the first cards to receive the "Topps All-Star Rookie" trophy symbol since the company brought it back for the first time since 1978. Ozzie Smith may have been the era's greatest shortstop but Larkin was no slouch either.

He'd end up in the Hall of Fame once all was said and done.

He was effective with both the bat and his glove on his way to earning 12 All-Star team selections over his career.

And his rookie card is one of the keys to the 1987 Topps set as a result. Nolan Ryan is pretty much one of every set's biggest names in which he appeared.

Nearly 20 years after Topps featured his rookie card in their 1968 set, the fireballer is pictured with the Astros ready to blow one past another hitter. Cal Ripken Jr. was one of my favorite players as a kid.

He was one of the first to really bring the idea of a shortstop who could hit for power.

Ripken was a Rookie of the Year, two-time MVP, and nineteen-time All-Star.

He's a baseball icon and his card rightly deserves to be on this list. At this point on the list we're way past the point where paying the fee to grade a card really doesn't make much sense from a profitability standpoint.

But in top condition, Clemens' card still can be worth $20 so if it's the Tiffany version.

A young Rocket is shown smiling in his Red Sox uniform.

It's a nice-looking card overall but not nearly as valuable as some of the others on this list. Palmeiro was another member of Topps' "Future Stars" subset that year who did live up to that expectation.

True, his career ended in controversy like other members on this list but his rookie card still holds up as one of this set's most valuable.

He put up some monster numbers year after year but surprisingly was only named to the All-Star team four times in his career.

Like Maddux, he was one of the key players of that era who slipped away from the Cubs. So there you have it, the ten most valuable 1987 Topps cards. This set was one of the most popular of the 1980's and contained a monstrous 792 card checklist in total.

It really is a pretty decent set overall.

And for those of us who grew up collecting these in the late 1980's, they'll always have a huge nostalgic factor to them despite not having the most monetary value.