After you read through this list, you might be shocked at how much some Bo Jackson baseball cards are worth...

Some are worth thousands of dollars.

But, remember how popular Bo Jackson was during the late 1980s?

And every kid who played Tecmo Bowl for Nintendo wanted to be the Raiders because Jackson was so unbelievably dominant.

Jackson was extremely popular with kids of that era and now those kids are grown adults with money looking to satisfy their nostalgic collecting needs.

That's why some of Jackson's cards can be worth so much.

And in this guide I look through his 10 most expensive cards.

There are two versions of this card: the regular base version as well as the higher end Tiffany version that was printed on premium cardboard and distributed in a limited number of factory sets.

Because of its higher quality and relative scarcity, the Tiffany version is worth quite a bit more.

The popularity of the 1986 Topps set has risen in recent years which has also boosted the value of Jackson's card.

Even if this weren't his most expensive card I think it would still be my personal favorite on this list.

The 1986 Topps design is unique and this is just a great looking card overall is a set that also included Barry Bonds and Jose Canseco. 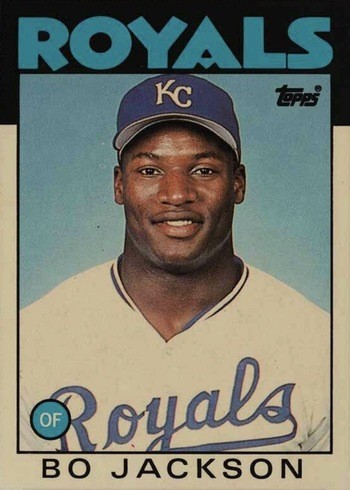 The Memphis Chicks were a Minor League ball club up until around 1998 when they became what is now the West Tennessee Diamond Jaxx.

This was Jackson's first professional baseball team after he declined to play in the NFL.

There were both a gold and silver version of this card printed but judging by PSA's population report, one is not really more scarce than the other.

What makes this card so valuable is that there is only one PSA 10 copy of this card in existence at the time of this writing.

In any other condition, the value isn't nearly as impressive but that one PSA 10 sold for a steep $2,000. 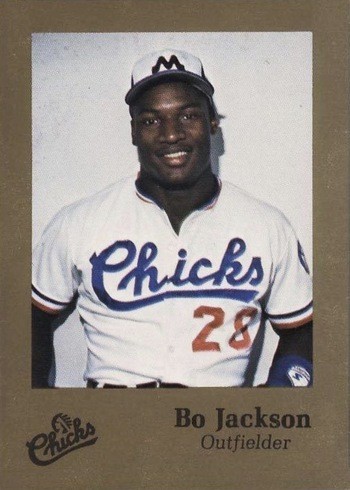 This is one of those cases where the value of a baseball card is primarily due to a printing error.

The 1986 Donruss Highlights set included 56 cards of some of the biggest stars of the day and documented some of their extraordinary accomplishments that season.

In Jackson's case, the reverse side tells of his first Major League home run, a 475 foot bomb that set the record for the longest homer at then Royals Stadium.

Most of these were printed with gold lettering on the "Highlights" logo on the front but some sets made it into circulation with white lettering.

Those carry a significant price premium over the gold letter version. 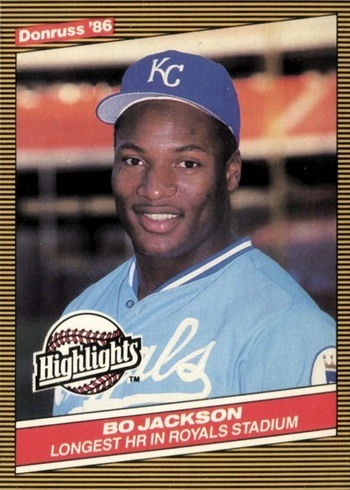 Technically, this is not a baseball card as Jackson is pictured in his Auburn football uniform.

But, I made an exception here as it's still one of his most expensive cards.

Actually, there is a Bo Jackson card in this set where he is playing baseball but in top condition it's about three-times more prevelant than the football version.

So, that's why this one is more expensive.

Regardless, both are incredibly rare and are a must-have for any Bo Jackson collector. The 1991 Topps Desert Shield set is one of the greatest sets of the modern era, in my opinion.

They look exactly like the regular Topps baseball cards that year except for the Desert Shield logo in the upper right hand corner.

Distributed in limited quantities, they were given to soldiers who fought during the Persian Gulf War.

The low number of sets mixed with the fact that many didn't survive in top condition makes them very valuable in top grade these days. Here is a card which perfectly exemplifies what Bo Jackson was best known for: playing two sports at the same time.

The two-sport star dominated the football scene at Auburn and eventually won the Heisman Trophy.

That's why many were stunned when he turned down a multi-million dollar contract to initially play pro football with the Tampa Bay Buccaneers.

But, we later learned just how good he was on the baseball field, too, as he starred primarily as a member of the Kansas City Royals.

It's a great-looking card that shows off Bo's personality and quickly reminds us why he was so famous. Say what you want about Donruss and Leaf cards of the late 80s but they are definitely unique in design.

The Leaf and Donruss versions of these cards look exactly the same except for the Leaf logo in the upper left corner.

There are only 264 cards in the Leaf set, though, and it was intended for distribution in the Canadian market.

Card backs were printed in both English and French.

PSA 10 examples of the Donruss card are worth about $50 or so making the leaf version worth about three times as much in top grade. 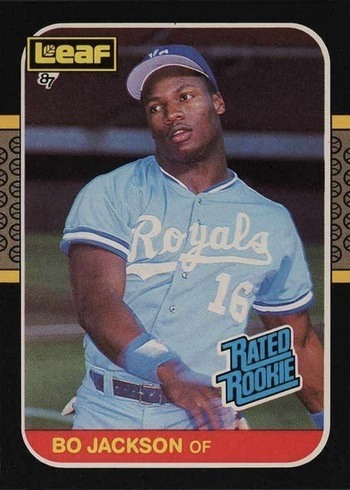 Another easily recognizable set, the 1987 Topps baseball cards featured woodgrain borders much like those of Topps cards back in 1962.

"Future Stars" was a subset that paid tribute to up and coming stars of the day, one of which was Bo Jackson.

Not all of the members of the "Future Stars" subset lived up to that name.

But, Bo Jackson certainly did...

He may not be a Hall of Famer but there is no questioning he was one of the biggest names of his time. 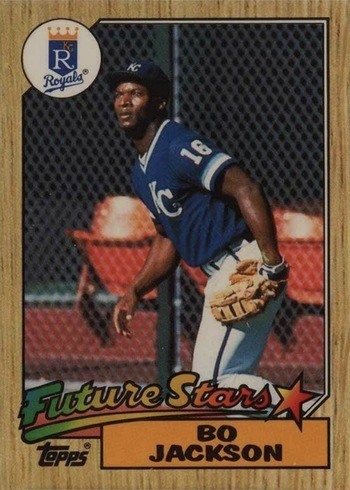 The 1986 Donn Jennings Southern League All-Stars was a 25-card set that featured some pretty big names.

Tom Glavine, Mark McGwire, Jose Canseco and of course, Bo Jackson, all had a card in this minor league set.

I think it's a great-looking card overall because of its design layout and great photograph of Jackson warming up.

Top grade examples of this card are not too difficult to come by and can still be had for around $130 or so. Like Topps' "Tiffany" set, Fleer's "Glossy" set was a premium take on their regular base set that were printed on higher quality cardboard and distributed in limited numbers.

The blue borders on this card are extremely susceptible to showing wear and tear.

But, they do help create a card with strong eye appeal and go great alongside the Kansas City Royals baby blue uniform colors of the day.

I'd say this is one of Jackson's more popular rookie cards among collectors and it's certainly a key to the 1987 Fleer set. Bo Jackson may not have ended up in either the NFL or MLB Hall of Fame but how many other people can say they made an MLB All-Star team as well as a Pro Bowl team?

That ability to play both sports at the highest level is Bo Jackson's biggest legacy.

That and his dominance on Tecmo Bowl made him extremely famous in many households with a Nintendo across the United States...

During his professional career he would achieve the following:

There is no question that Bo Jackson was an incredible athlete and we will forever remember him for his talent on both the baseball and football fields.

That extreme popularity helps keep his rookie cards on the radars of many modern sports card collectors to this day.