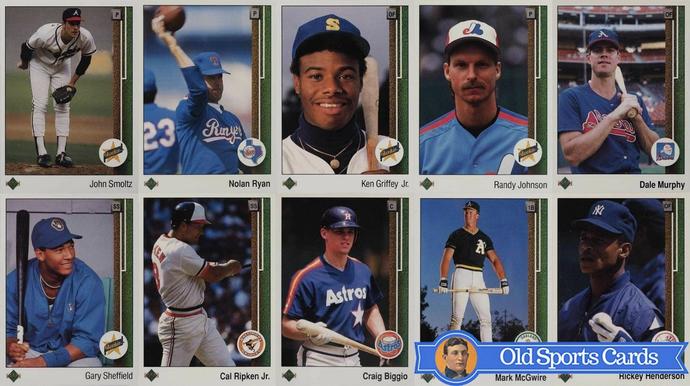 Believing that card designs had grown a bit dull, the 1989 Upper Deck baseball card set kicked things up a notch to take the hobby by storm.

To deliver a better collecting experience, Upper Deck emphasized quality and innovation to include design features such as:

To help cover the cost of such a high-caliber product, Upper Deck packs were priced at a premium to the rest of the competition, but collector demand was sky-high regardless.

An iconic set, these cards changed the game and set a new standard of quality throughout the hobby.

And in this guide, I'll run through the 25 most valuable.

Like the 1989 Donruss, Fleer, Score and Topps sets, large print runs saturated the market with these cards, driving down their values.

One of the most iconic baseball cards in the hobby, the 1989 Upper Deck Ken Griffey Jr. rookie card helped usher in a new era as the first card and face of this landmark set.

Like the Topps "Future Stars" and Donruss "Rated Rookies," Upper Deck wanted to include its own version of a rookie subset and so they landed on a 26-card "Star Rookie" subset to kick off the set checklist.

And, it may seem crazy now, but at the time, Upper Deck took somewhat of a gamble by placing Griffey at the front of the subset in the #1 spot.

They could have played it safe and gone with someone like Gregg Jefferies, arguably the hottest up-and-comer of the day, but instead went with "The Kid" who wasn't even sure to make the Mariners' 1989 Opening Day roster.

Fortunately, though, Upper Deck executives stood pat in their decision.

Even if it meant having to color in a Seattle Mariners logo on his San Bernardino Spirits hat and shading it in a bit, they made him look enough like a Mariner to get him ready for the 1989 season.

Griffey took over from there and the rest is history. 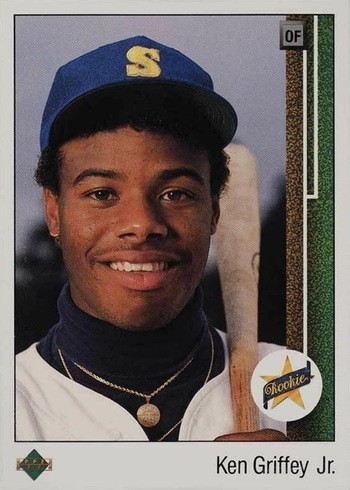 Another member of the "Star Rookies" subset, Gary Sheffield, did turn out to be one of the biggest stars of his era.

While he may not have been a defensive stalwart, he was more than capable as a hitter, picking up a batting title, five Silver Slugger awards, and smacking 509 home runs over his 22-year career.

His ties to the PED scandal will likely keep him out of the Hall of Fame, but he was a gifted player, nonetheless.

Known mostly as an outfielder and DH throughout the bulk of his career, Sheffield originally debuted as a shortstop for the Brewers.

And, if you look closely, you can find an error version of his rookie card with the 'SS' printed upside down in the upper-right corner.

That variation has risen in value over the years to the point where it's become worth hundreds of dollars in top condition. 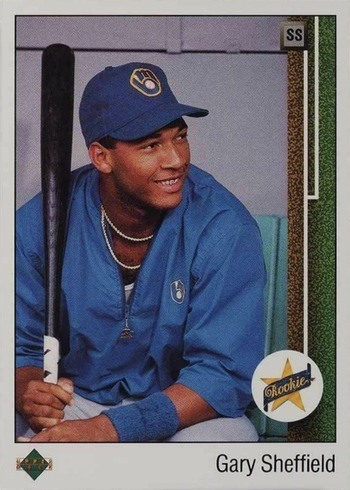 I've always wondered if the reverse negative variation of the Dale Murphy card was intentional.

Whenever I see it, I instantly think of the reverse negative image of that Topps mistakenly used for the '57 Hank Aaron.

Topps never corrected their mistake, though, so there is only that one version of the '57 Topps Hank Aaron and its value is derived purely off of Aaron's legend and popularity.

However, Upper Deck did correct the reverse negative error and released an updated version into the market as well.

Because of this correction, the value of the reverse negative skyrocketed.

Maybe I am wrong, but the reverse negative Murphy seems like a nod to the '57 Topps Hank Aaron: both were stud righties for the Braves and the Aaron error was such a high profile mistake.

So, maybe Upper Deck did this to create a chase card to build hype for the set overall...or perhaps it was just coincidence. 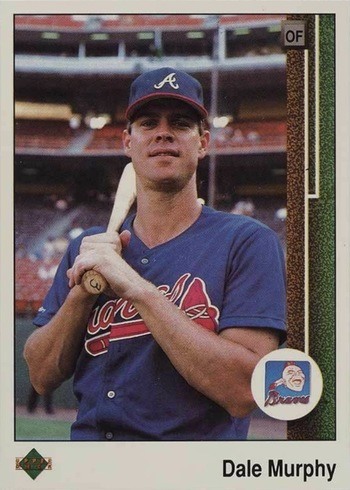 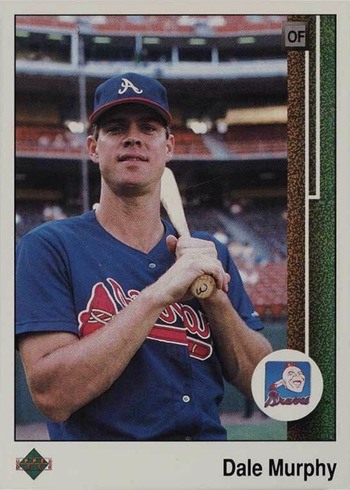 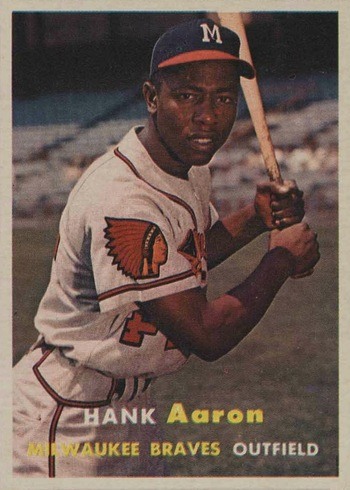 You know the hobby is alive and well when a Randy Johnson rookie is selling for north of $100.

That's no knock on Johnson.

I love the guy and he was one of the greatest and most dominant pitchers I ever had the pleasure of watching.

But, this card was selling for around $50 a year ago in PSA 10 grade, and for the longest time, you could find them for under $25 in that condition.

That shows you how explosive prices for many cards in this hobby have been lately, kind of a like a Randy Johnson fastball itself.

While Johnson had shown flashes of greatness in Montreal in 1988, his poor start to the 1989 season prompted the Expos to ship him to the Mariners as part of a multi-player deal.

From there, his career springboarded into one of the greatest ever for any left-handed pitcher. 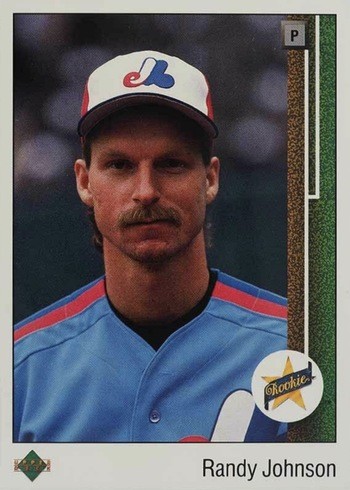 Because Nolan Ryan was so popular, Upper Deck gave him two cards in their inaugural set, once as an Astro and the other as a Ranger.

After a nine-year stint in Houston, Ryan's time with the Astros came to a close in 1988 and he would sign to play for the Rangers in 1989 for the remainder of his storied career.

At the age of 42, you'd think most guys would be washed-up, but that wasn't the case for Ryan.

Instead, he led the league in strikeouts, earned his eighth and final All-Star appearance and finished fifth in Cy Young voting.

A shining example of how Upper Deck was trying to up the standard in the baseball card world, this triple-image overlay gave collectors a glimpse of what it was like to face Ryan in action. 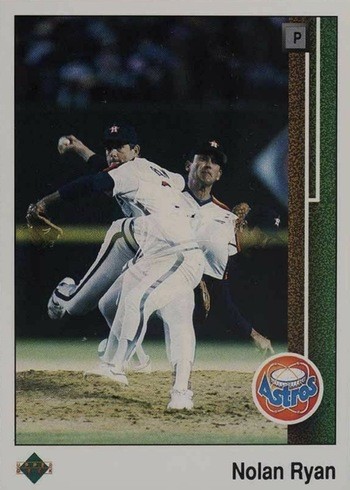 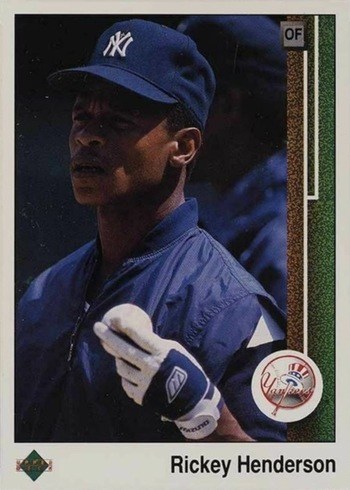 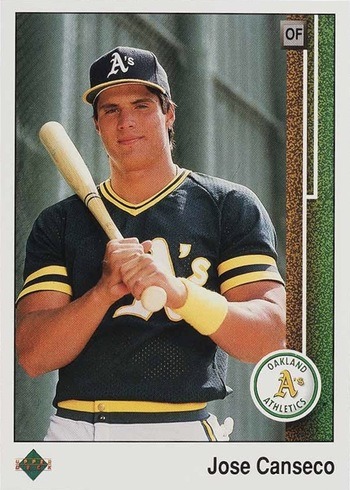 On his Rangers card, Ryan is showing tossing a football, a concept that the Rangers pitching coach at the time, Tom House, felt would reduce the injury risk of his pitching staff.

There are other cards that show Ryan tossing the pigskin, like the 1991 Pacific and 1992 Colla to name a couple, but this one is undoubtedly the most recognizable. Appearing in twelve games in 1988, John Smoltz got off to a sputtering start to a legendary career as he went 2-7 and posted a 5.48 ERA.

He may not have seemed like a "Star Rookie" heading into the 1989 season, but he quickly turned things around going 12-11 with a 2.94 ERA while earning his first of eight career All-Star appearances.

Whether he was a starter or reliever, Smoltz was one of the best pitchers throughout the 1990s and into the mid-2000s.

And, along with fellow Hall of Famers Greg Maddux and Tom Glavine, Smoltz helped form some of the most feared starting rotations that I ever saw. 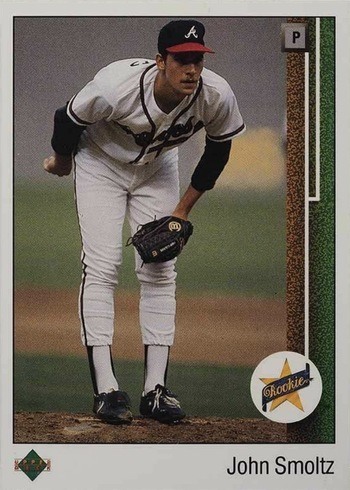 By 1989, a young Mark McGwire was already one of the biggest sluggers in baseball and this card perfectly captured his intimidating size and presence.

While injuries in the mid-90s set his career home run trajectory off a bit, he would later get back on track to finish with 583 for his career.

We all know that he received a bit of help from PEDs along the way, but there is no question he could hit for power with or without them.

Like the impact of ESPN's documentary, The Last Dance, has had on Michael Jordan card values, ESPN's Long Gone Summer has also boosted the value of McGwire cards, especially his rookie cards.

Speaking of big names from the 1980s, Bo Jackson continues to be one of the most popular players of that era among hobbyists.

From television ads to video games, he was a larger than life superstar who captivated the sports world with his ability to play both baseball and football at a high level.

Sadly, his athletic brilliance was derailed by an unfortunate hip injury that he suffered against the Cincinnati Bengals in 1991, but his legend lives on to this day and his cards remain in high demand. 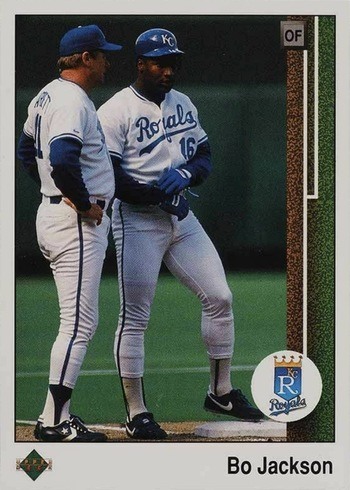 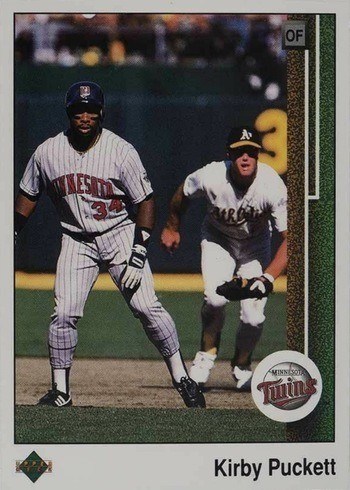 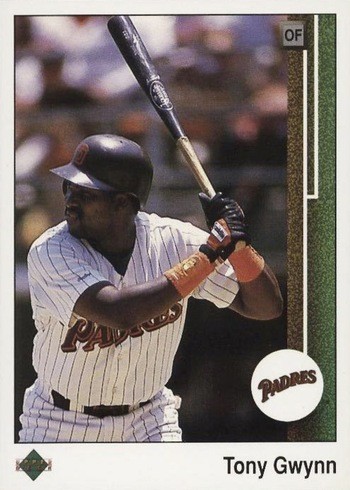 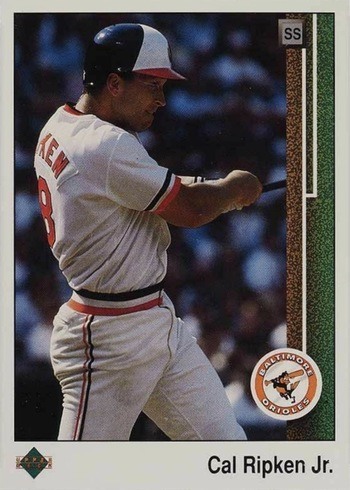 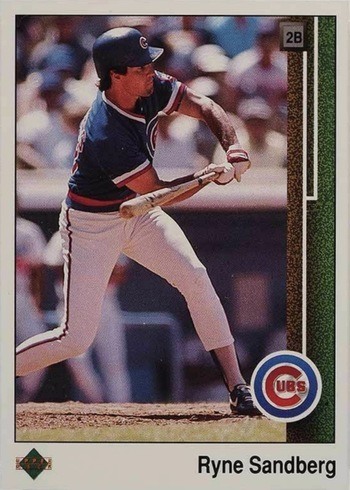 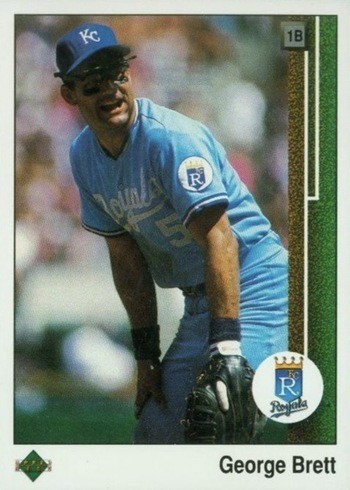 Elected to the Hall of Fame in 2015, Craig Biggio was one of the best all-around defensive talents in baseball history as he was selected as an All-Star as both second base and catcher.

He was no slouch with the bat, either, as he picked up five Silver Slugger Awards, collected 3,060 hits, and led the league in doubles three times.

Given how good he was and the fact that he is a Hall of Famer, I'm a bit surprised his card isn't worth a bit more. 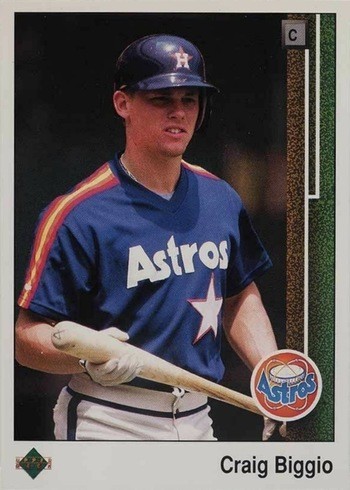 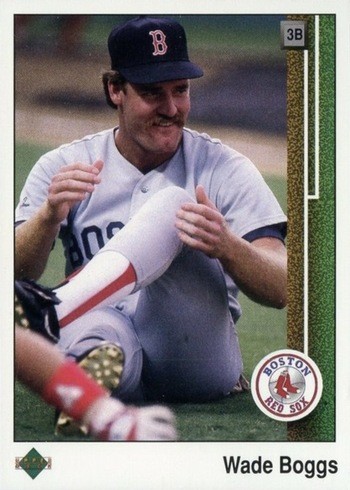 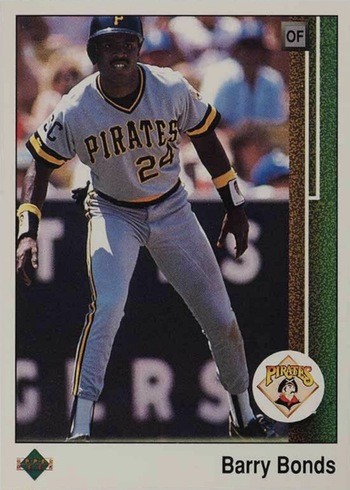 Like Biggio, I thought Martinez's status as a Hall of Famer would give his rookie card a bit more of a boost in value.

While he wound up as the greatest designated hitter of all-time, Martinez spent the first several seasons in the Big Leagues at the hot corner.

A 7-time All-Star, 2-time batting champion, and 5-time Silver Slugger, the guy could absolutely rake, and he was one of the most feared hitters of his era.

After his tenth appearance on the Hall of Fame ballot, Martinez received 85% of the vote and rightfully earned recognition for his place among the game's greats in 2019. 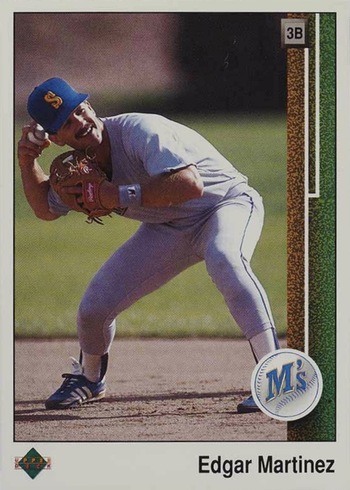 During the late 80s, Gregg Jefferies was arguably the most-hyped rookie in the baseball card hobby and could have easily been Upper Deck's choice to be the first card in the set instead of Griffey.

Coming off of two Minor League Player of the Year Awards, how could he not be?

Unfortunately for Jefferies, he never did quite find the same level of success in the Majors, although he did have a couple of All-Star seasons with St. Louis midway through his 14-year career.

Collectors who were kids back in the late 80s still have a strong enough affinity for his rookie card to keep it hovering around $35 or so in PSA 10 condition. One of the greatest defensive shortstops who ever played, Omar Vizquel once won nine Gold Gloves in a row on his way to totaling eleven over his storied career.

Nobody played more career games at shortstop than Vizquel (2,709), and he also owns the records for the highest career fielding percentage (.9847) and most career double plays turned (1,744).

Time will tell if Vizquel lands in the Hall of Fame, but there is no question that he was one of the best ever at his defensive craft.

His rookie card continues to rise in popularity among collectors as it will now set you back over $50 in top grade. 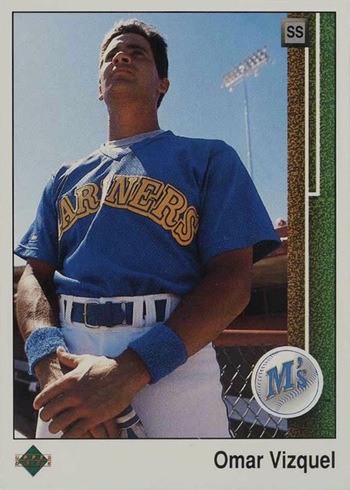 As you can see, this iconic set is packed with some fantastic rookie cards, stars, and errors to keep things interesting. 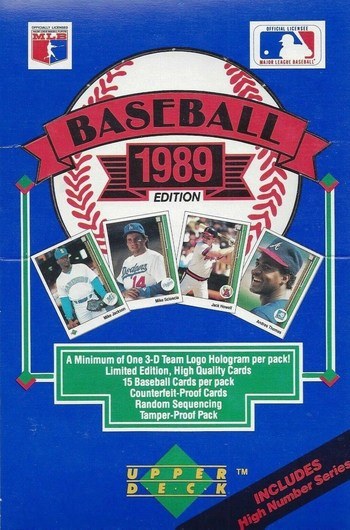 While the hobby may have initially been shocked by the relatively high price tags of 1989 Upper Deck packs, collectors quickly fell in love with these cards and they remain a hobby favorite to this day.