But I never came close to completing a set.

After all, there were 792 cards in total to collect and as a kid I just didn't have the resources to fund a quest like that.

But, I did what I could to at least keep or trade for as many of the star players of the day.

Even today, the design that Topps used for this set is easily one of my favorites of the modern era.

And in this guide, I will cover the 25 most valuable 1989 Topps baseball cards that are still worth a decent amount.

Like the 1989 Donruss, Fleer, Bowman, Score and Upper Deck sets, these cards were printed in such huge numbers that the market for them became oversaturated.

The only way they can have much value is by either being the Tiffany version (Topps' premium factory set) and/or being graded by PSA to be in perfect, gem mint condition (PSA 10).

Considered to be one of his most popular rookie cards, the 1989 Topps Traded issue features a young Griffey staring confidently with a bat over his shoulder.

The base versions are quite easy to find but in pristine condition they can still go for over $30.

But, the scarcer Tiffany version can be worth over a whopping $500 in PSA 10 condition.

Like other Tiffany cards, they are easily distinguished from their base versions by the glossy, sharper card stock. You may be surprised that a card from a period of massive print runs could still be worth so much.

If you can land one of the Tiffany versions of this Randy Johnson rookie card in perfect condition then you've definitely got something.

Topps released these premium Tiffany cards in limited numbers of factory sets so there just aren't as many of them around compared to the base sets.

That extra scarcity combined with the Big Unit's legendary status push this card to the top of the list. Like Bo Jackson, another two-sport star whose card almost made this list, Deion Sanders was one of the most exciting athletes of that era.

There's no doubt that Sanders was by far way more exciting and dominant on the football field but he did put 9 years into MLB.

That said, it's his overall fame and popularity that boost the value of his 1989 Topps rookie card into the top ten on this list. Johnson's early years weren't all that great and midway through the 1989 season, the Expos traded the hurler to the Seattle Mariners.

Boy, what a mistake that was.

It may have taken Johnson several more years before he really started to dominate in Seattle but it was well worth the wait.

The Traded version of Johnson's rookie card may not be worth as much as the one we covered earlier but it's still quite valuable in Tiffany form. It remains to be seen if Sheffield will ever make it into the Hall of Fame.

His poor defense and connections with the BALCO PED scandal have been enough to overshadow his unquestionably impressive offensive stats.

Even so, his 1989 Topps "Future Star" rookie card remains a collector favorite in this set and can hold decent value in the Tiffany version. 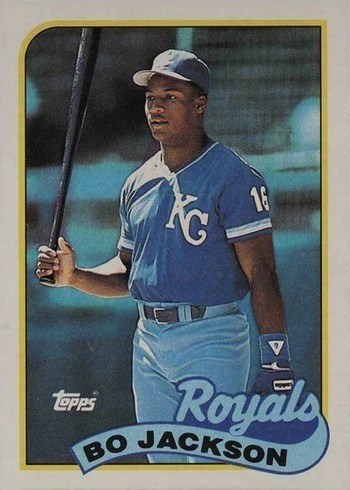 I may not be a Braves fan but man was it fun watching Smoltz and the rest of those amazing Atlanta pitching staffs of the 1990's.

Along with fellow Hall of Famers Greg Maddux and Tom Glavine, Smoltz put up some impressive performances and would even win a Cy Young in 1996.

His rookie card is one of the keys to this set and can be worth hundreds of dollars in the Tiffany version. I remember growing up watching Biggio play and thinking how versatile he was.

He may not have had the power that some of the big name sluggers of the day had but he was still exciting to watch.

Defensively, he could play pretty much anywhere.

And he was a stud on the basepaths racking up tons of stolen bases and scoring 100 or more runs almost every year from the mid-1990's into the 2000's.

His rookie card may not be the most expensive in the set but it's still very much one of the keys to own. Nolan Ryan's career took a turn in 1989 when he started a new chapter with the Texas Rangers after leaving the Houston Astros.

That season would be his 23rd out of an amazing 27-year career.

And even in his 23rd season he still threw over 300 strikeouts and was selected to his final All-Star appearance proving he still had plenty left in the tank.

Even so, his career is easily one of the most impressive of any pitcher.

That popularity helps boost most of his cards to the most valuable in pretty much any set in which he was featured, including this one. Speaking of playing defense...this guy was one of the best defensive shortstops to ever play the game.

He won 11 Gold Glove awards over his career...

Vizquel was an absolute joy to watch as he'd stop seemingly impossible balls and throw guys out like you wouldn't believe.

Most remember him from his dominance with the Indians in the 1990's and early 2000's but he started out in Seattle as shown on his rookie card. Last but not least is Cal Ripken Jr.

His rookie cards from various 1982 sets are some of the most expensive cards of the 1980's.

And his legendary status is just enough to keep the value of his 1989 Topps card in the top ten of this set.

He was one of the most popular players of the day, and like Nolan Ryan, that's enough to keep his cards among the most valuable in pretty much any set. 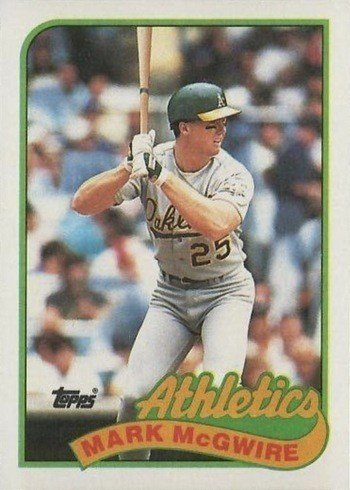 So there you have it, the ten most valuable 1989 Topps cards. It's a great set overall and features rookie cards of several Hall of Famers and stars of the day.

While many of the cards in this set are basically worthless in today's market, it really is a pretty decent set overall.