If there’s one thing that 1989 Fleer baseball cards are known for, it’s controversy.

During a time period in which manufacturers were rushing to produce as many cards as possible to keep up with demand, it seems that Fleer became a bit careless with its Billy Ripken and Randy Johnson cards.

The errors and variations that plagued those two cards are hobby icons.

And in this guide, I will cover the 10 most valuable 1989 Fleer baseball cards that are still worth a decent amount.

Like the 1989 Donruss, Topps and Score sets, these cards were printed in such huge numbers that the market for them became oversaturated.

The only way they can have much value is by either being the Glossy version (Fleer's limited, premium set) and/or being graded by PSA to be in perfect, gem mint condition (PSA 10).

And here it is: one of the most notorious error cards in the history of the baseball card collecting hobby.

When collectors began pulling Billy Ripken cards from 1989 Fleer packs that had the phrase "F*ck Face" on the knob of his bat, the hobby went nuts.

Fleer immediately tried to correct the issue by putting any number of things over it from white out, to black boxes, to black scribbles.

Prices for these cards soared and even to this day they can fetch a pretty penny in top grade condition--especially the white out variation since it's the rarest of them all.

CNBC interviewed Ripken about 20 years later and he suspected that Fleer knowingly let the error into circulation to build hype and I wouldn't doubt it... Billy Ripken's card wasn't the only controversial card in this set.

Randy Johnson's rookie card would also carry a fair bit of controversy as it involved a Marlboro cigarettes ad on the card.

The most notorious is the one with the ad positioned in the background over his left shoulder.

Production of these were stopped and later print runs will show the ad either partially or completely blocked.

There are also variations of the card where the ad has a green or red tint to likely due to Fleer using a different printing facility or plate for them. 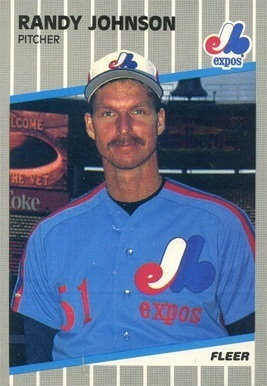 Demand for Ken Griffey Jr. rookie cards is as strong as ever as you can tell by the price people are willing to pay for the glossy version of his 1989 Fleer rookie.

Griffey Jr. was one of those rare talents in any sport with enough star power to set himself apart on a whole different level.

He could hit, he could run, he could field, he could throw...the guy could do it all.

It was frustrating to watch those years during the early 2000's when injury after injury kept him off the field.

Had he stayed healthy, there's a good chance he would have had the numbers to put him high in the conversation for being the greatest player of all-time. One of the biggest sluggers of his day, Gary Sheffield ended up 509 home runs and 9 trips to the All-Star game over his career.

His bat speed was incredible and it seemed he could wait until the very last millisecond to rip through the ball.

Sheffield's career got off to a slow start during the first few seasons but from the mid-'90s onward he was a force to be reckoned with.

Still, a cloud hangs over him as his connections with the BALCO PED scandal have tarnished his legacy like those of many other players of his era.

That said, his rookie card is still a key to this set. Another one of the key rookie cards in this set belongs to the incredibly versatile Craig Biggio.

Over his career, Biggio was a catcher, outfielder and infielder...and he played all those positions well.

Biggio may never have reached superstar status but over 20 years with the Astros he just quietly went about his business of being a very consistently productive player year in and year out. Being a great starter or reliever is not easy to do, let alone both.

Mechanically, Smoltz was incredibly solid but it was his poise and concentration with which he pitched that really sticks out in my mind.

The 1989 season was his first full season in the Majors and he pitched well enough right out of the gate to earn his 1st of 8 All-Star appearances. When I was a kid, I used to love watching the "Bash Brothers" duo of Canseco and Mark McGwire hit towering home runs.

And I used to love playing as the Oakland Athletics on "RBI Baseball" for the original Nintendo trying to hit as many bombs as possible with those two guys.

They were both incredibly popular and so were their baseball cards.

And I remember this Canseco card like it was yesterday

I loved how Fleer captured Canseco watching what appears to be one of those towering home runs as he gets ready to trot around the bases. Typically I like my Nolan Ryan cards with images of him mowing down a batter with his incredible fastball.

However, this is still a great-looking card due to that retro Astros jersey and logo in the upper right corner.

All of that color really makes this card pop, which isn't easy considering the dull grey background.

Ryan actually wrapped up his stint with the Astros the year before and began his first of five seasons with the Texas Rangers in 1989. Up to that season, Mattingly was one of the game's most popular players and he seemed to be destined to make the Hall of Fame one day.

However, injuries began to pile up and weigh on his production and he just wasn't the same player during the 1990's.

When I was a kid collecting during this era, though, his cards were always among the hottest in any set and this was no exception.

Mattingly was a 9-time Gold Glove winner so it was great to see a card like this showing off his defensive skills. Rickey Henderson was one of the most exciting players to watch in the 1980's and early 1990's.

Once he got on base, there seemed to be no stopping him.

The 1989 season would see Henderson lead the league in both runs scored and stolen bases for the fourth time in his career up to that point.

On this card, Henderson appears to be looking towards his 3rd base coach for a sign. The 1989 Fleer baseball card set contained 660 cards in total and that's before you count all the errors and variations scattered throughout.

Aside from the Billy Ripken and Randy Johnson variations, most of the cards in the set can be had for next to nothing these days.

But, like you saw, there are a few rookie cards and stars that can still have some value if graded in top condition.

One thing that always stood out to me was how teams in this set are in order based on how they performed in 1988 and within each team, players are listed alphabetically.

Some love this set, some hate it.

Regardless, you can't argue that even though they were printed during an era of market saturation, there are still some iconic cards packed inside.