No matter which Ozzie Smith rookie card you are considering, each is high on the wishlist of many baseball card collectors.

"The Wizard" was a defensive mastermind and had a terrific personality...

Those two attributes made him an easy fan favorite and one of the most exciting players to watch in his era.

How can you not love a guy who does backflips on the baseball field?

Along with Cal Ripken Jr., Ozzie Smith was one of my favorite shortstops to watch and hope to emulate as a young kid.

Obviously, I never did reach the level of play of either of those guys but what I can do is pay tribute to each of Smith's rookie cards in this guide.

Before we go into detail on each of his cards later on, let's first address how much Ozzie Smith's rookies are worth.

Depending on which Ozzie Smith card you are considering, the value can range from $10 or less in poor condition to thousands of dollars in pristine condition.

His 1979 Topps issue may be his most recognizable but his others can bring hefty prices, too.

Below are some estimated prices of each of his rookies in a range of conditions from VG (PSA 3) all the way to Mint (PSA 9) as determined by third party grading company Professional Sports Authenticators (PSA).

The first card to feature Smith in his Padres uniform was the 1978 Family Fun Centers #1 regional issue.

For that reason, many consider this to be his true rookie card.

Ozzie was again featured in another Family Fun Centers set that was distributed the following year in 1979.

Front Design: These regional issues are oversized and have a dark woodgrain background to them that can be susceptible to easily showing wear and tear.

Ozzie is shown posing in his defensive stance, something he'd be well-known for throughout his career as he would go on to rack up 13 Gold Gloves.

The Family Fun Centers logo and mascot sit at the bottom of the card near Ozzie's nameplate. Reverse Design: The reverse side contains Ozzie's personal information and a nice headshot of him alongside a facsimile signature at the bottom.

In the center is a really nice quote from Ozzie about his "greatest thrill in baseball" up to that point in his career where he mentions his time playing overseas in China and South Korea in 1976.

This bit from Smith adds a very nice personal touch to the card and I can't help but wish more cards would have included quotes from the players themselves. Condition Issues: As with any oversized card, the corners, surfaces and edges are very susceptible to wear just from handling and storage alone.

On top of that, the woodgrain borders are very unforgiving and will easily show dings and dents.

Hostess began issuing baseball cards with its food products in 1975 in the form of three-card panels.

Ozzie appeared alongside Willie Montanez and Nolan Ryan in the 1979 set holding down the outer right position on the panel.

Front Design: Hostess did a decent job with the imagery for their baseball cards and this is a perfect example.

A fresh-faced Ozzie is posing in his Padres uniform at bat with a bright blue sky in the background.

His name, team affiliation and position are shown at the top while black dotted lines surround the outside (as long as you didn't cut over them). Reverse Design: The backs of these cards were not all that exciting as they merely featured players' information and statistics.

Speaking of statistics, check out his stat line from his time in the Minors at Class A Walla Walla: 69 runs scored in 68 games. 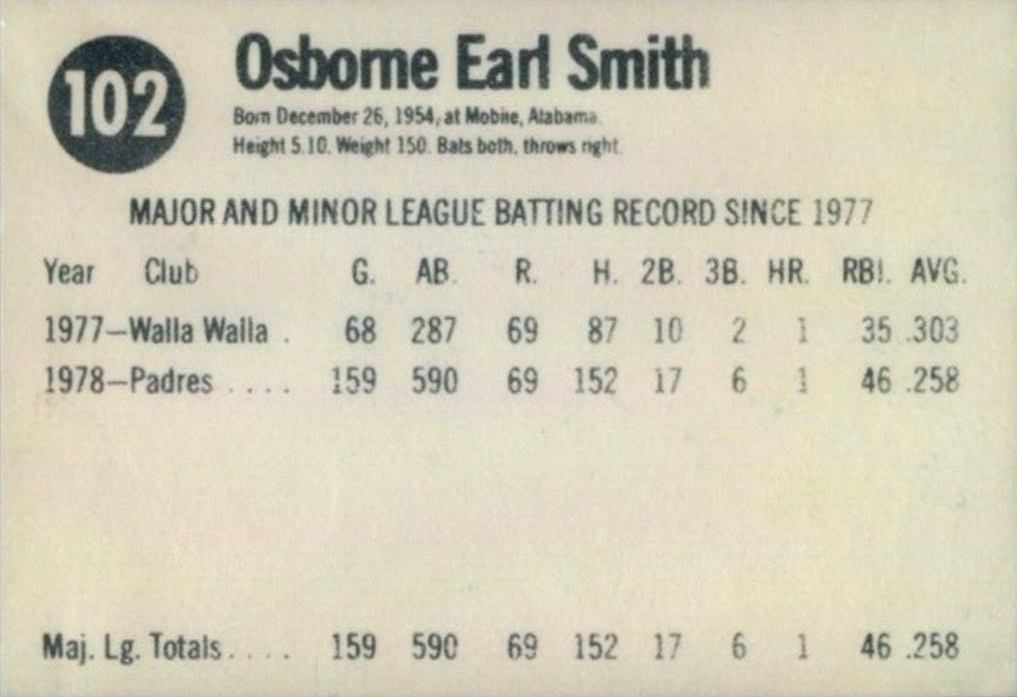 Condition Issues: Because these three-card panels were physically part of the boxes that contained Ding Dongs, Twinkies, etc. you can imagine how easy it was for the cards to become damaged during distribution.

Not to mention, many were accidentally bent or the dotted lines were cut through when trying to remove them from the boxes.

Often times, centering is the biggest challenge for a given card but in this case its surface damage just from distribution, handling and cutting them out.

Smith's O-Pee-Chee rookie card was created for distribution in the Canadian market.

Even though they are more difficult to find in high grade than their Topps counterparts, they don't carry as hefty of a price tag.

Front Design: The front of the card contains a large, close-up shot of Smith glancing off to the side wearing an old, multi-colored Padres batting helmet.

Smith's name, position, and Padres affiliation round out the front design elements. Reverse Design: The back of the card packs a ton of text atop a primarily green background.

Smith's personal information and stats are displayed across the top while a nice write-up outlines his Minor League performance that led to his invitation to Padres Spring Camp in 1979.

The write-up is printed in both English and French, which is another way you can tell the O-Pee-Chee from the Topps version. Condition Issues: O-Pee-Chee cards of that era were known for their lower quality than their Topps counterparts because of the way they were printed and cut.

You'll see a lot of "rough cuts" on these cards but that doesn't necessarily mean a card won't receive a high grade since the third party grading companies take the lower quality cuts into consideration.

Centering is also a big challenge with this card.

Ozzie Smith's 1979 Topps rookie card is the key to a set that is absolutely jam-packed with Hall of Famers.

And along with the 1978 Topps Eddie Murray, 1978 Topps Molitor/Trammel, and 1980 Topps Rickey Henderson, it's one of the last great rookie cards of the vintage era.

Because of that, they can go for huge prices if graded in PSA 10 Gem Mint condition as only 5 examples of this card have ever achieved that status s of this writing.

Front Design: The front design is exactly the same as its O-Pee-Chee counterpart that we previously discussed except for the presence of the Topps logo in the bottom left. Reverse Design: The back of the card lacks any French translation and because of that, does not appear as cramped as the O-Pee-Chee card.

That statistic of 69 runs scored in 68 Minor League games still blows my mind...

Something else that has always caught my attention with the back of this card is the vague trivia question on the right side: "What happened May 17, 1932?"

Anything could've happened on that day in baseball history...so any answer you could give would, in theory, be correct as long as it actually happened.

The fact that White Sox pitcher Milt Gaston started 4 double plays in one game that day is definitely impressive, I just thought it was always a bit funny how vague this question was. Condition Issues: Centering plagues this card and is by far its biggest challenge and is the single-most common thing that will prevent a given example from achieving high grade.

If there is one thing we will always remember first ballot Hall of Famer Ozzie Smith for, it is unquestionably his defensive skills.

By the end of his career, he sat records for career assists (8,375) and double plays (1,590) by a shortstop (eventually broken by Omar Vizquel).

Early in his career he was not known for being a great hitter but he was able to steadily improve over time, especially during his time with the St. Louis Cardinals.

Say what you want about his hitting ability, but he did hit well enough to be able to get on base often enough to steal 580 bases in his career.

Over his amazing career, he would accomplish the following:

Smith was a truly remarkable player and was incredibly entertaining to watch on both sides of the ball.