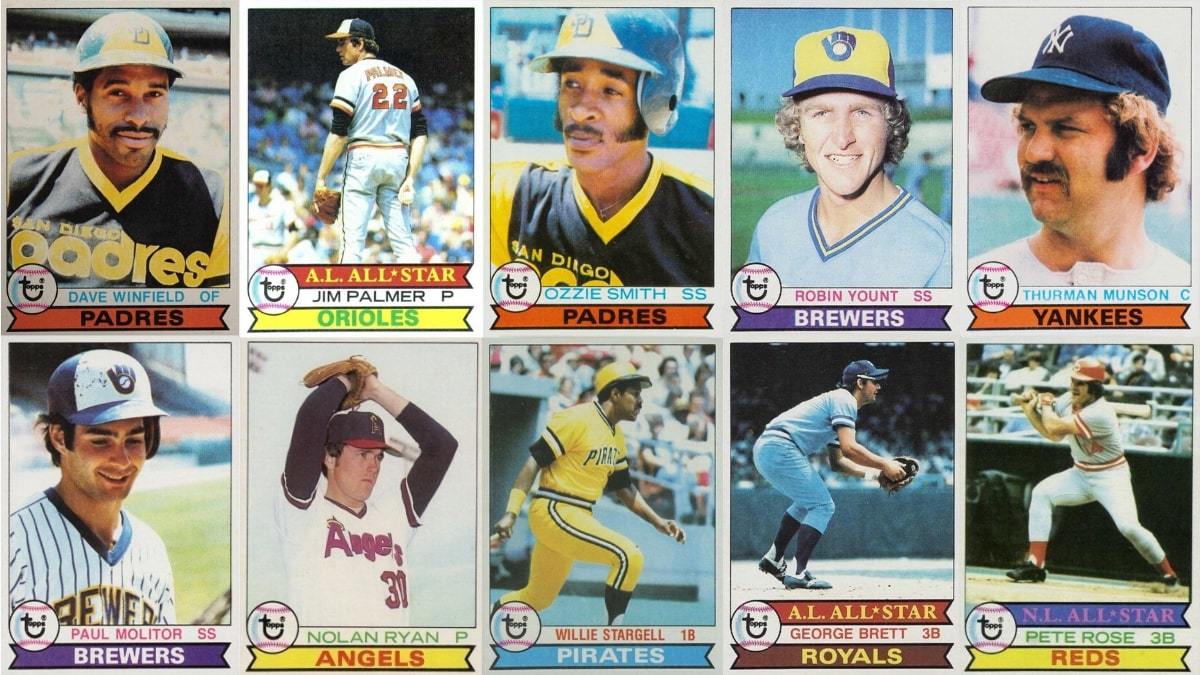 To wrap up the decade, the 1979 Topps baseball card set offered a great design, colorful imagery and plenty of star power.

And the Ozzie Smith rookie card would eventually become one of the most iconic of the era.

I love the old Topps logo that sits in the bottom-left corner of the front of the cards and the photography was pretty good for the time.

While several players on this list were All-Stars in 1978, only those who were starters received the "All-Star" designation on the front of their cards.

Many would consider this a somewhat overlooked set, but its popularity has continued to grow over time.

It's just a glaring representation of what a PSA 10 grade can do for the value of certain sports cards.

The Ozzie Smith rookie card in this set and Rickey Henderson rookie card from the following year are two cards for which there are enormous premiums on PSA 10 specimens due to how rare they are.

Of the thousands of examples of this card that have been graded by PSA, only five of them have achieved a PSA 10 grade.

Ozzie spent the first four seasons of his career in San Diego where he picked up two of his thirteen Gold Gloves and made one All-Star appearance.

However, after tensions between ownership and Ozzie reached a breaking point, the Padres traded him to the St. Louis Cardinals for Gary Templeton where he'd cement his legacy as one of the greatest shortstops who ever played. Again, you can see the enormous difference in pricing between a PSA 10 version of this card and a PSA 8 version.

Nolan Ryan cards from the vintage era are always pricey, but the separation between a 10 and 8, in this case, is quite substantial.

So, what makes PSA 10 grades so uncommon in this set?

Centering issues torment this set so badly that it makes it nearly impossible to achieve such a lofty grade when submitting them for grading.

The card itself is excellent as we get a glimpse of the intensity with which Ryan pitched as he winds up.

The 1979 season would be his last in an Angels uniform, and it was quite productive as he led the league in strikeouts and made his fifth All-Star game. 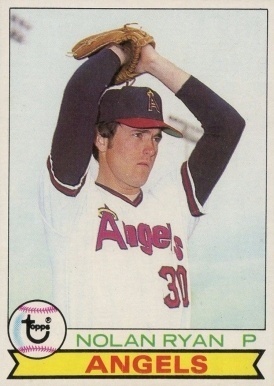 While Pete Rose cards are always great, this particular card is interesting for a couple of reasons.

Before the start of the 1979 season, the Phillies signed Rose to join their juggernaut as they felt he was the last missing link to get them over the World Series hump.

So, this card marked the last time Rose appeared in a Reds uniform (at least until he rejoined the Reds several years later).

And, it also marked the last time he would be listed as a third baseman on a mainstream card since Mike Schmidt was already well-established as their guy at the hot corner.

This card perfectly catches the essence of what kind of a hitter he was as you can almost feel him whacking a base hit through a gap in the defense. 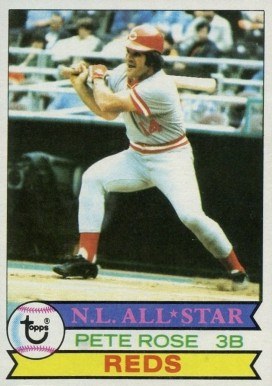 Willie Stargell is a baseball legend and Pittsburgh Pirates icon, but his spectacular 1979 season gives this card an extra boost in value.

That entire season, his 18th in the Majors, was quite a doozy for him as he was not only named MVP of the regular season but of the NLCS and World Series as he led the Pirates to his second World Series ring.

Interestingly, he was named co-MVP of the regular season as both he and Keith Hernandez finished with exactly 216 voting points, making it the first time two players would share the award.

But none of them impacted his team through a combination of production, leadership, and inspiration quite like Pops did.

They don't call it the Most Valuable Player award for nothing.

And how about those old Pirates uniforms, could they be any brighter?

I love those old jerseys, and in this case, they help polish off a great-looking card with strong eye appeal. Winfield's time in San Diego was drawing to a close in 1979 as it would be his second-to-last season with the Padres before eventually signing with the New York Yankees.

And what a season it was.

After scoring 97 runs, driving in another 118 (which led the league and was a personal best), belting 34 home runs, batting .308 and picking his first of seven career Gold Gloves, Winfield finished third in MVP voting.

It was the closest he ever came to winning the award.

Of all the players on this list, Winfield's is the toughest to find in PSA 10 condition as there is only one copy in existence floating around out there somewhere.

Because of that, the $2,500 estimate is likely a little low but it's anyone's guess. 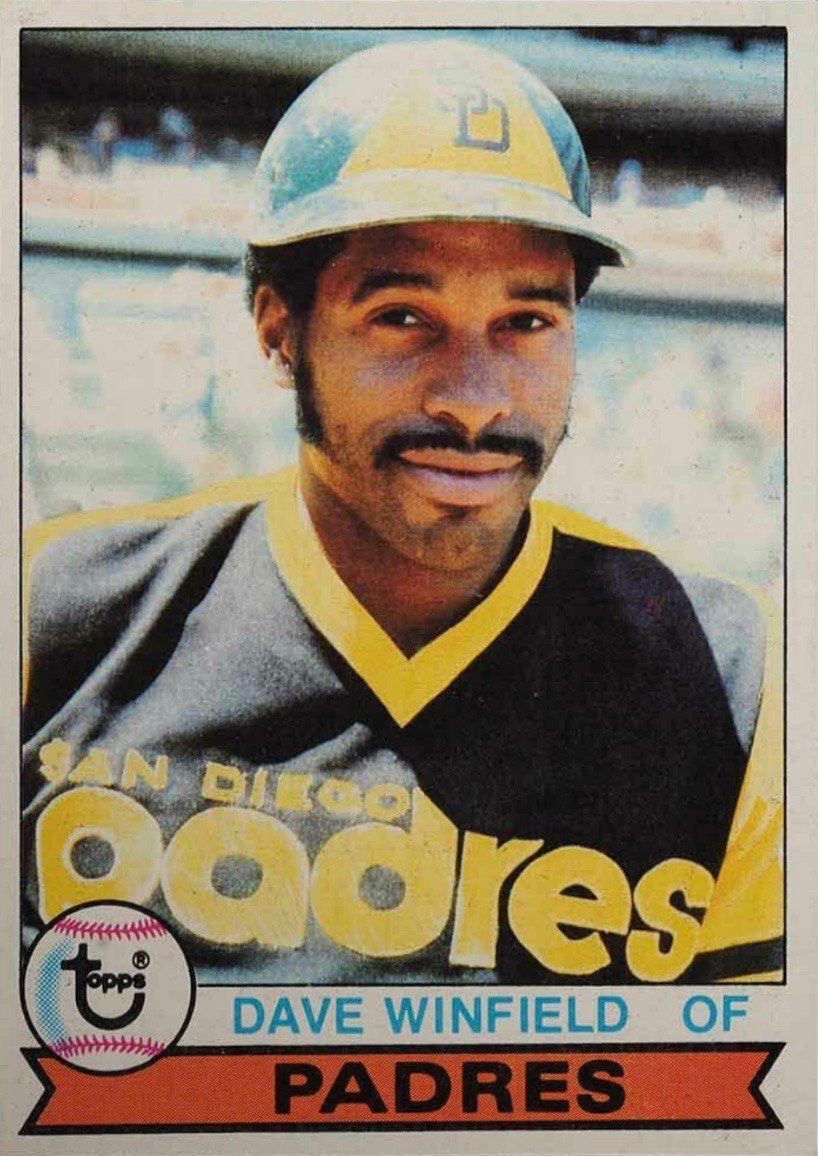 Like Winfield, Paul Molitor was another St. Paul, Minnesota native who would go down in history as one of the greatest of all-time.

Few possess the combination of speed and hitting ability that Paul Molitor did, which made him a nightmare for opposing defenses.

To give you an idea of how great Molitor was, he's currently ninth in career hits and 21st in runs scored.

You simply did not want to see this guy in the batter's box if you were the other team.

And he did all this while missing nearly 500 games, many of them in the first half of his career, due to injury.

Molitor made his cardboard debut a year earlier in the 1978 Topps set, making this his second-year card. In his sixth full season in the Big Leagues, George Brett was really starting to heat up in 1979.

Clearly, the guy was a force to be dealt with, but it was just a warm-up to his 1980 MVP season in which he finished with an incredible .390 batting average.

The baby blue Royals jersey gives this card a lot of pop as we see him ready at third, a position he would play for the majority of his career. 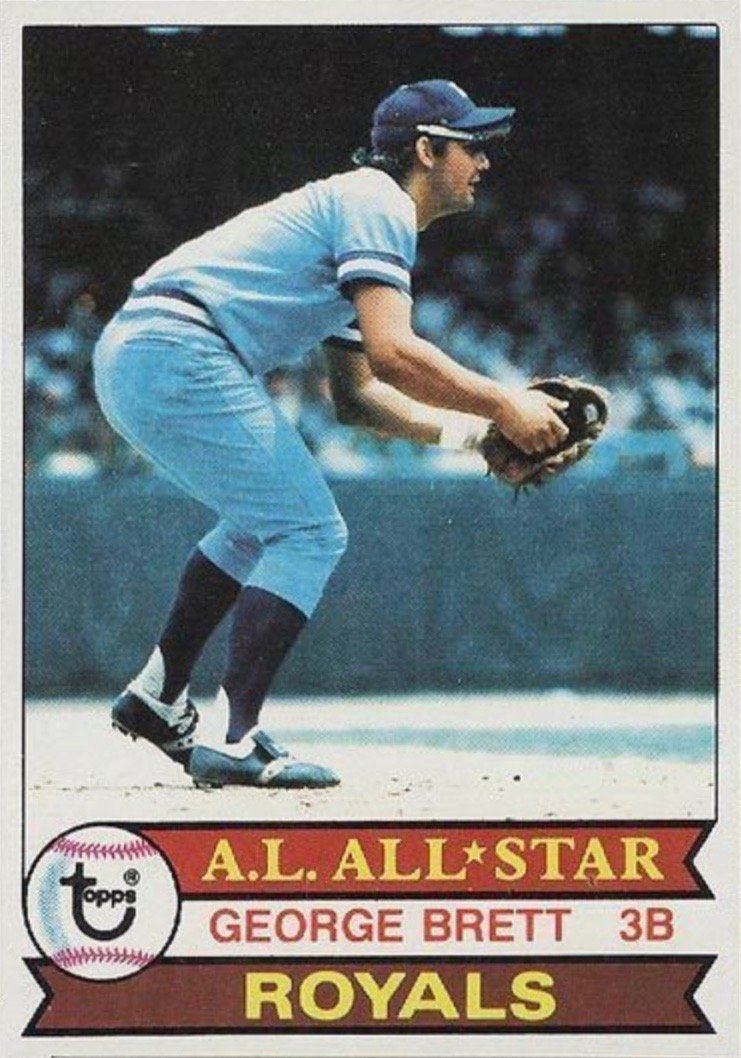 The New York Yankees had the day off on August 2, 1979, but it would turn out to be a very dark day in both franchise and baseball history as that was the day that their team captain, Thurman Munson, would die as a result of a plane crash.

It was a devastating blow to the baseball world and to a Yankees team that was coming off back-to-back World Series titles in the 1977 and 1978 seasons.

While he may not be a Hall of Famer, few players were as beloved and vital to their team's success as Munson was.

To this day, he remains a Yankee icon and his cards are always in demand.

Unfortunately, this would be the last time Munson appeared on a Topps baseball card. 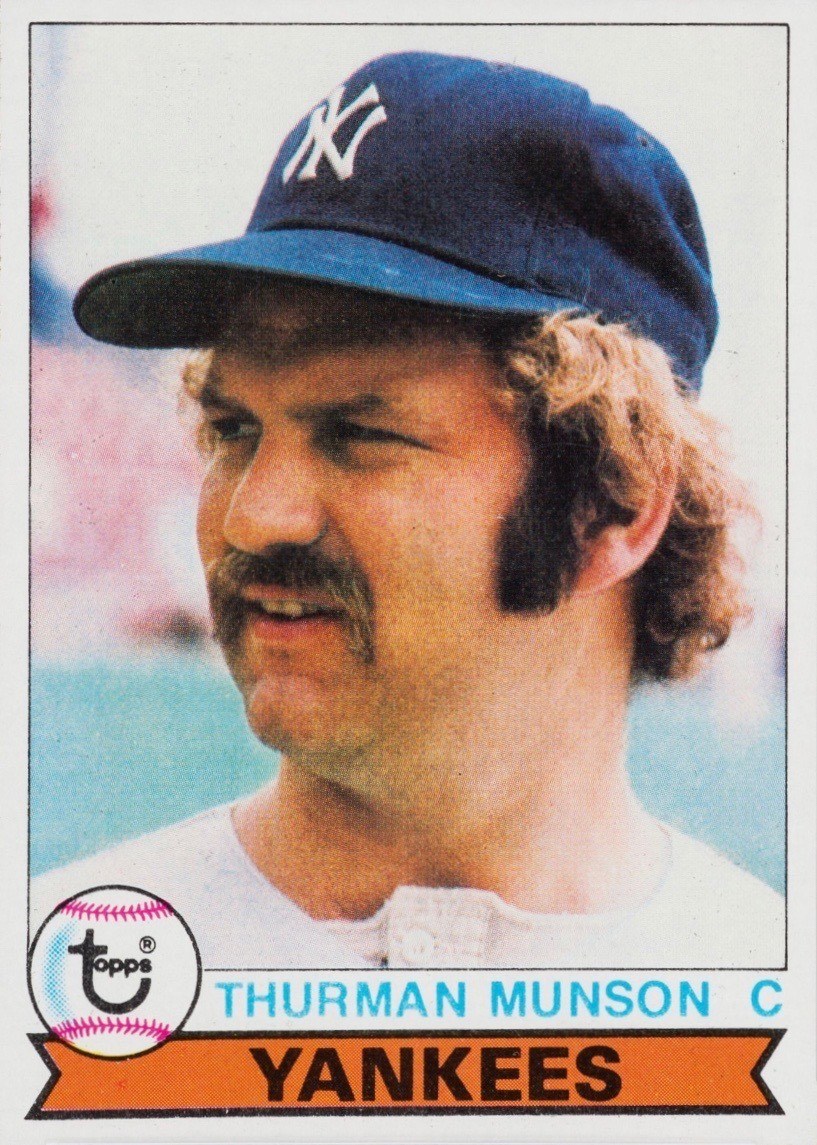 Not once in his career did Robin Yount ever lead the league in runs scored, home runs, RBI or batting average.

However, he did remain healthy and incredibly consistent over his 20 years with the Milwaukee Brewers on his way to twice being named MVP and a franchise favorite.

Interestingly, Yount was only named to three All-Star teams over his career, which are among the lowest totals of any player enshrined in Cooperstown.

I love everything about this card from the old Brewers uniform (especially the logo), to the curly hairdo, to the overall bright appearance. 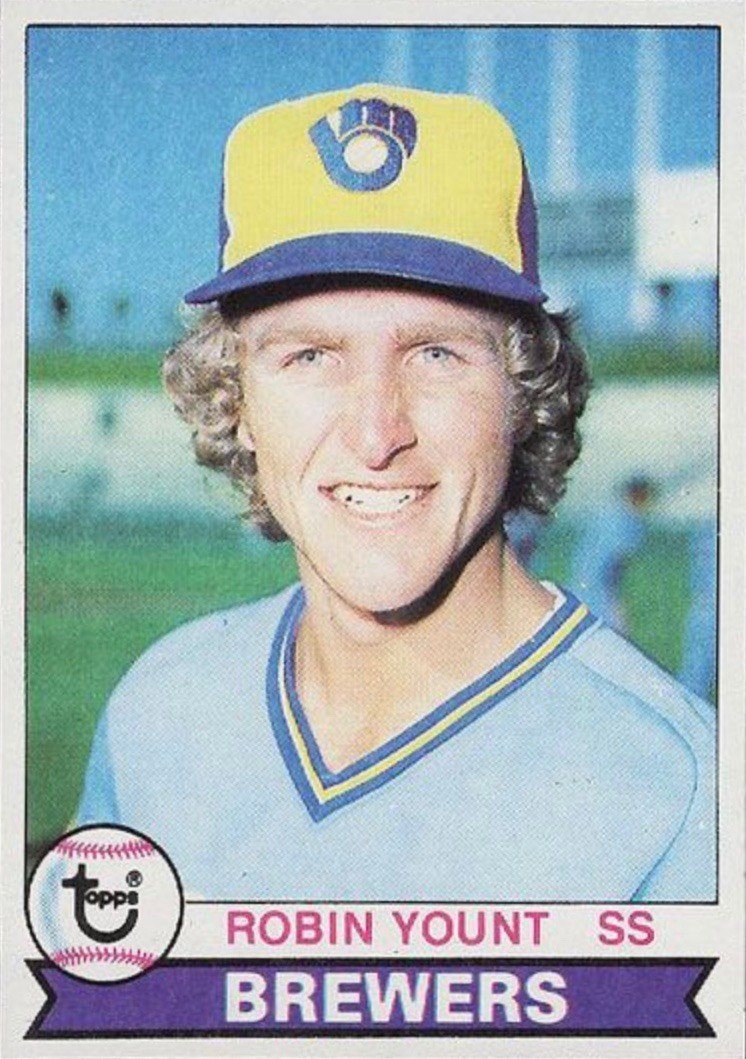 Few pitchers have ever turned in a stretch of dominance quite like Jim Palmer did during the 1970s.

Over that ten-year stretch, Palmer won 20 or more games an incredible eight times and earned three Cy Young Awards along the way.

Of the many impressive things about Palmer's career, one of the most interesting may be the fact that he helped lead the Orioles to three World Series titles in three different decades as the won in 1966, 1970 and 1983.

This is such a great-looking card as we get to see a nice image of Palmer staring down an opposing hitter. So there you have it, the ten most valuable 1979 Topps baseball cards.

Throughout the 726-card checklist, you'll find lots of color, lots of action, and lots of star power.

And if you can find well-centered examples of these cards that don't have any dings or scratches, you may be looking at some fairly expensive cards.

There's a lot to like within the set, including several different subsets:

While the hobby may consider this a somewhat overlooked set, there's no doubting that it contains lots of history and plenty potential for high-grade cards.