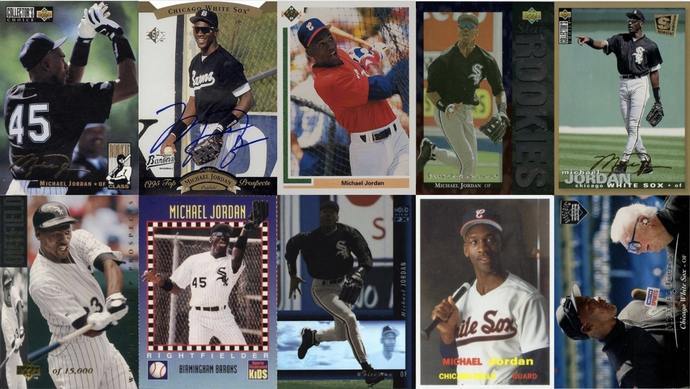 Given how popular his basketball cards are, it's sometimes easy to forget that certain Michael Jordan baseball cards are also highly desirable.

And some of them are quite expensive in high grade...

In one of the most shocking moments in sports history, Jordan announced his retirement from basketball on October 6, 1993, while clearly at the top of his game.

And he shocked the world again a few months later on February 7, 1994, when he signed a Minor League Baseball contract with the Chicago White Sox.

Though his baseball career never quite panned out, it was an exciting experiment that left the sports world with some great memories and many types of Jordan baseball cards as card producers quickly capitalized on the hype.

Because of his legacy, many of those cards have held up quite well over time, given they are in top condition.

While there is some debate, many collectors consider this to be the first Michael Jordan on-card autograph card.

However, some will argue it was the extremely scarce 1994-1995 Collector's Choice 5" x 7" blow-up box topper that, even though it was in a basketball product, featured Jordan in a baseball uniform.

And yet others will say that neither of those count since they show Jordan in a baseball uniform, opting instead to designate Jordan's 1996 SPx autographed basketball card as his first on-card auto.

Opinions, aside, all I have to say is this: I'll take any one of the three, please!

The bottom line is that this card is truly iconic and among his most desirable in the hobby.

Unlike many autographed cards of today, the  cards were not numbered but there are believed to have been just 23 copies of this card. 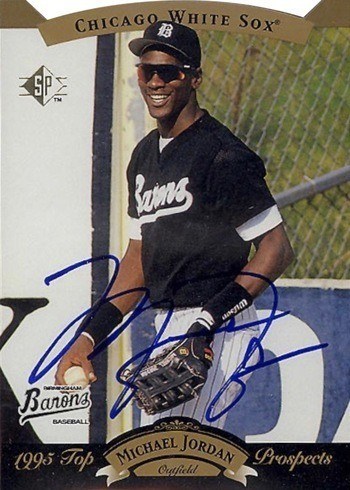 Arguably Jordan's most recognizable rookie baseball card, the 1994 Upper Deck #19 shows him chasing down a fly ball in his White Sox uniform.

Every one of the 550 cards in the set's checklist also came in an "Electric Diamond" parallel at a rate of one per pack.

While they're not necessarily rare, they are scarce in PSA 10 condition with only eight copies of this card having received the lofty grade at the time of this writing.

Its scarcity in top grade causes its value to skyrocket north of $500-600 if and when one of them in a PSA 10 holder comes up for sale or auction. 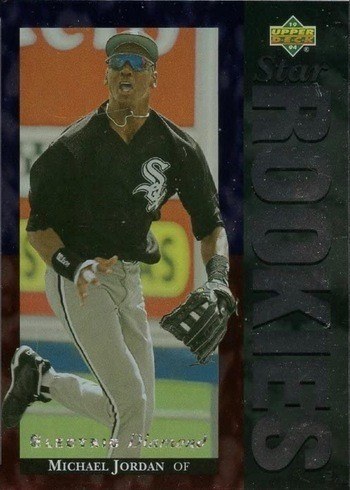 Because of licensing agreements, Jordan was not part of the 1994 SP base set but, luckily for collectors, he did make it into the 38-card Holoview insert set.

These inserts were distributed randomly in packs and came in either a blue base version or a rarer, red die-cut "Special F/X" parallel.

Both feature a hologram across the bottom but the red parallels do appear to have a foil background while the blues do not. 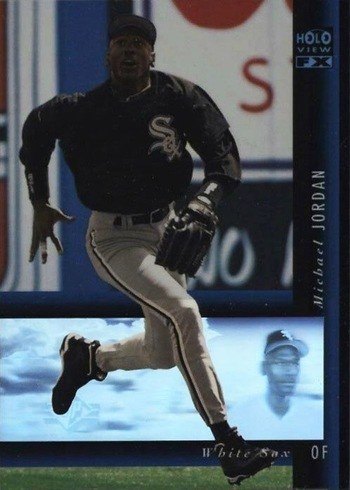 This is one of my favorite Jordan baseball cards simply because of the way he meshed the two sports of basketball and baseball together in one action shot by "shooting" a baseball.

Alongside the base version, there are also a silver signature and gold signature parallel upon which Jordan's facsimile autograph is stamped in either silver or gold foil. The 1994 Sports Illustrated for Kids Series II set included 108 cards (numbered #217 - 324) and featured prominent athletes, both past and present, from all over the world.

Distributed as parts of complete sheets inside Sports Illustrated for Kids magazines, collectors could easily separate the cards from one another because of their perforated edges.

I vividly remember how difficult it was to separate those Sports Illustrated for Kids cards without causing paper loss or other damage to the card.

Because of that, pristine examples of this card are hard to come by, making them worth quite a bit in that condition.

By the way, if you happen to have some old SI for Kids magazines lying around, the Jordan card is in the World Cup issue. 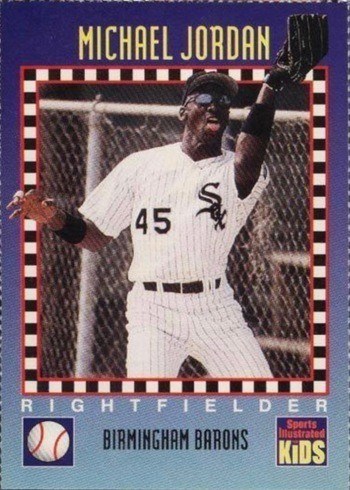 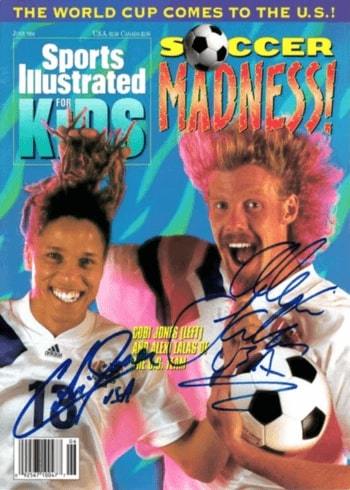 Released during the summer of 1994, this 270-card set featured some of baseball's best up-and-coming Minor League Prospects of the time.

The dual-image design showcases Jordan taking a nice rip at the ball front and center with the same image scrunched into the lower left.

Along with the silver base card, a gold parallel limited to 15,000 copies offered collectors a nice chase.

The gold parallel is hard to find in top condition and goes for several hundred dollars in the rare instance one in PSA 10 grade surfaces for sale. 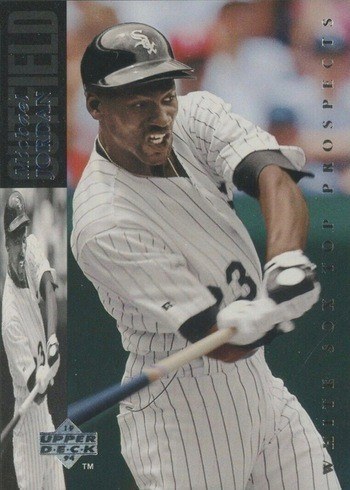 Though Jordan's baseball debut wouldn't come about until 1994, Upper Deck did manage to work him into their 1991 set as a short print chase card.

Collectors were quite shocked that year to see this card featuring Jordan in a White Sox uniform taking batting practice at Wrigley Field before the annual "Windy City Classic" charity game between the Cubs and White Sox in 1990.

Little did we know that Jordan would not only suit up for that charity game a few years later on April 7, 1994 but he collected a pair of base hits and knocked in two runs.

Although this card may not necessarily be from Jordan's actual playing days, it still makes the cut as one of his most popular baseball cards. Jordan appeared on card #500 in the standard 1995 Collector's Choice set, but he also appeared in the "Special Edition" set that contained just 265 cards in its checklist.

All of the base cards in the set feature blue borders while there are also silver and gold parallels that not only feature silver and gold borders, respectively, but also Jordan's facsimile signature stamped along the bottom.

Each version also contains a "Special Edition" monicker stamped in foil in the upper-right corner. 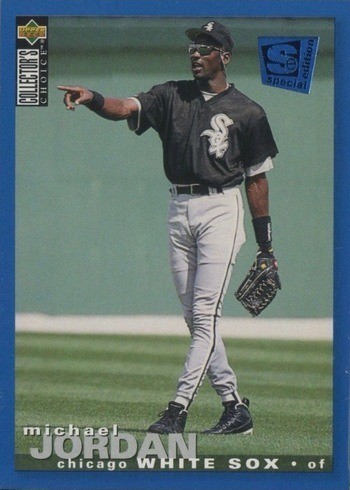 The next card on our list features two of the city of Chicago's most celebrated sports icons together at the same time.

Legendary Chicago Cubs broadcaster, Harry Caray, is shown interviewing Jordan for WGN as he looks up to him through those iconic, black-rimmed glasses.

As a baseball sportscaster, you've got to think that Caray was overjoyed and probably quite shocked to be interviewing Jordan not on a basketball court, but on a baseball field. 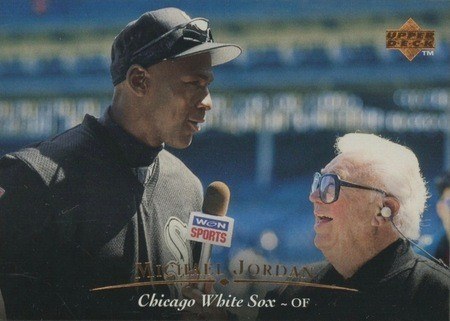 The 1990 SCD Pocket Price Guide checklist consisted of 60 cards in total and featured some of the biggest baseball stars of the day, including Don Mattingly, Darryl Strawberry, Cal Ripken Jr., Tony Gwynn and more.

The card front even lists him as a member of the Chicago Bulls.

However, the reverse side of the card references how Jordan took batting practice with the White Sox at Comiskey Park during the summer of 1989, smacking several home runs in the process.

Notice the estimated price point for his 1986-87 Fleer rookie card along the bottom: $275 in mint condition.

These are the kinds of things that make me wish I had a time machine. While Jordan fulfilled his dream of playing professional baseball, it would last only one season.

Some will look at those numbers and think his baseball career was a failure.

But, when you consider Jordan was 31 years old at the time and hadn't played baseball since high school, it actually seems quite admirable.

Let's face it, though: Jordan belonged on the basketball court.

And on March 18, 1995, when Jordan said simply, "I'm back", the sports world rejoiced as the greatest player in the history of the game returned to the hardwood.