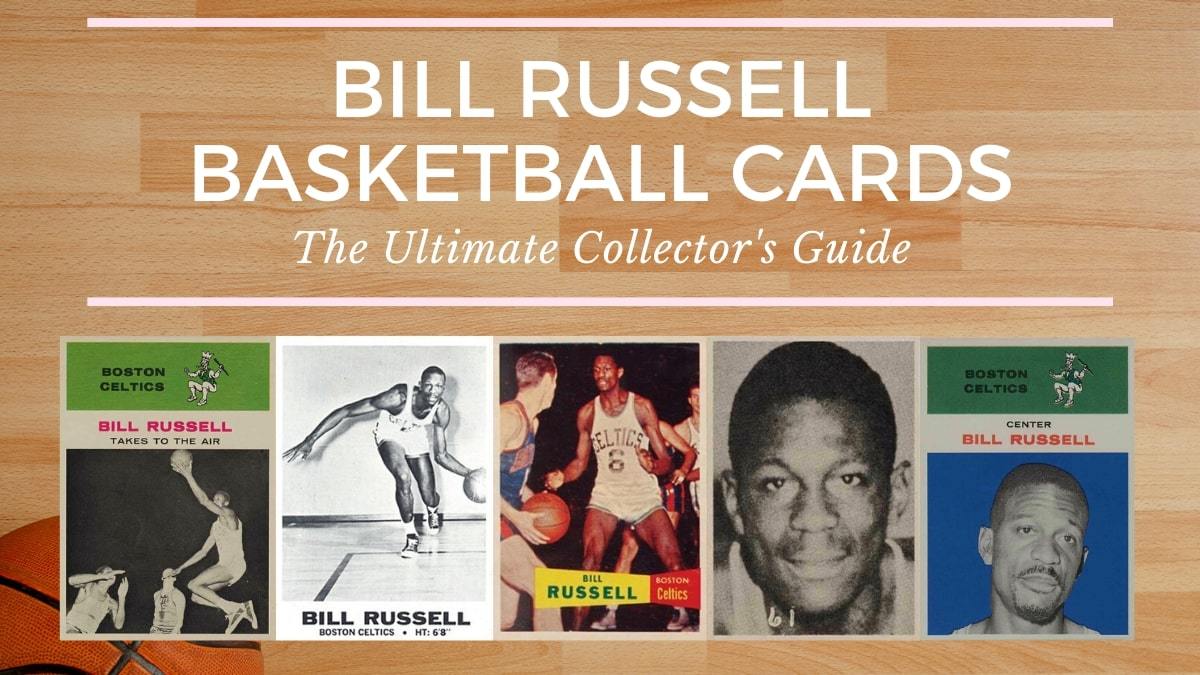 It should come as no surprise that Bill Russell basketball cards are some of the most desirable vintage cards in the hobby.

The man is a basketball icon and one of the greatest of all-time...

Throughout the 50s and 60s, Bill Russell and the Boston Celtics dominated the NBA to the point that he doesn't even have enough fingers to wear his eleven championship rings.

While there weren't many basketball cards printed during his playing days, fortunately for us, Russell does have a few fantastic mainstream and oddball cards from that era.

Some of them are among the most valuable basketball cards overall.

And in this list, we'll run through each one of them in detail.

The checklist doesn't break out tennis players into their own category and lumps them in with the "Golf" section, though clearly, those final five athletes are holding tennis rackets, not golf clubs (image below).

Bill Russell is one of the biggest names in the set that features other superstars of the era, such as Willie Mays, Mickey Mantle, Jackie Robinson, Otto Graham, George Mikan, and many more.

Russell's card shows him as a member of the 1955-1956 San Francisco Dons, a team he led to becoming the first championship team to go undefeated for an entire season.

Each 12" x 9" sheet of thin, glossy paper stock is hand-cut to produce the individual cards, many of which you'll often see with uneven or crooked borders.

That's if you see them at all.

Exceedingly scarce, they rarely surface for sale or auction. Sheet With Bill Russell Card On The Bottom Row One of the most iconic basketball cards in the hobby, Russell's Topps rookie card features the young center on defense against the Cincinnati Royals.

Because of his commitment to the U.S. national basketball team, Russell didn't join the Celtics until mid-way through the 1956-1957 season after helping the United States to a dominant Olympic gold medal run in Australia.

After returning home, his transition to the NBA was seamless.

In his 48 games as a rookie, Russell averaged 19.6 rebounds and 14.7 points over 48 games while helping lead the Celtics to an NBA championship victory

The back of the card also documents his then single playoffs record of 244 rebounds, a record he would smash time and time again on his way to be the NBA's career leading playoff rebounder with 4,104.

The key to Topps' first basketball card set, Russell's rookie card is one of my personal favorites across all sports. If you asked me to choose a favorite basketball set between 1957 Topps and 1961 Fleer, I would have to flip a coin.

Both were landmark sets for different reasons and both were jam-packed with stars, Hall of Famers, and fantastic rookie cards.

While rookie cards of Wilt Chamberlain, Jerry West, Oscar Robertson, and Elgin Baylor may headline the 1961 Fleer set, Russell's status as one of the game's greatest players keeps him among the keys.

During the 1960-1961 season, Russell's fifth in the league, he would pick up his fourth NBA title and make his fourth All-Star appearance.

You'd think his 23.9 rebounds per game would've been enough for a fourth rebounding title, as well, but Russell fell a bit short of Chamberlain's incredible 27.2 boards per game. The 1961 Fleer set checklist consisted of 44 base cards and 22 "In Action" cards that featured half of the guys on the base cards in the middle of several different action shots.

Russell's card shows him soaring through the air and laying one up with his left hand over a couple of Philadelphia defenders.

The reverse side of the card features an excellent write-up of how his incredible rebounding ability was often the kickstarter to the high-powered Celtics offense. Consisting of the twelve players and Coach Red Auerbach from the 1963-1964 Celtics championship team, this 13-card set is not something you see frequently.

These black and white pictures are easily susceptible to wear and tear because of their thin stock, so finding them in any condition is difficult.

Russell set personal single-season bests in total rebounds (1,930) and rebounds per game (24), which allowed him to take back the rebounding title after a four-year hiatus. However, while its exact origin remains a mystery, Topps printed a test set in 1968 that featured black and white images of the era's top stars.

Since Topps never officially released the set, collectors believe the limited number of these cards in circulation today originated from company employees who kept them over the years.

The 22-card set features 17 Hall of Famers, with Russell being one of the most expensive of the bunch alongside Wilt Chamberlain and Jerry West.
Each card also contained a puzzle piece of a larger image of Wilt Chamberlain on its reverse side. There will always be a good debate as to who was the greatest center to ever play in the NBA.

Kareem, Wilt, Shaq, Hakeem, and Russell were all incredibly talented and dominant in unique ways.

Russell stood apart from the pack in his defensive mastery, clutch playoff performances, and number of championships.

Over his amazing career, Russell put up some incredible stats, including:

Given his iconic status, Russell's cards should remain high on collectors want lists for years to come.