"Mr. Clutch", "Mr. Outside", "The Logo"...no matter what you call him, Jerry West basketball cards continue to hold their place as some of the most desirable in the hobby.

Would you expect anything less from the man whose silhouette serves as the inspiration for the NBA logo itself?

Because of his success as a player, coach and executive of the Los Angeles Lakers, his cards are keys in every set in which he appeared and some of the most valuable basketball cards to collect in general.

And in this guide, I take a look at both West's most important mainstream cards as well as some of his favorite oddball issues.

Since most collectors are familiar with West's mainstream Fleer and Topps cards, let's start with these first.

But, since I'm a big fan of some of his lesser-known oddball issues, I'll also cover a few of those later.

One of the keys to the iconic 1961 Fleer set and one of the most valuable basketball cards in the hobby, this is the one and only Jerry West rookie card.

Although West was known for his electric scoring ability, on this card he is shown in a defensive stance in his Los Angeles Lakers jersey atop a rich, red background.

An All-Star in each of his 14 seasons with the Lakers, West has become immortalized in basketball history for his success as a player, coach and executive.

In high grade, this card can be worth thousands of dollars and even in lesser condition they still aren't cheap. Although Topps produced a "test" issue in 1968, their 1969 release marked their first return to the hobby since creating their iconic 1957 set.

While the Lew Alcindor rookie is widely regarded as the most valuable card in the set, West's card is also one of the important keys.

Measuring in at  2-1/2” by 4-11/16”, these oversized cards are extremely susceptible to damage given their size and relative difficulty in storing them.

Notice that West is wearing a t-shirt instead of a jersey.

Because Topps didn't yet have an agreement with the league to feature unique team names, many players are shown in t-shirts, wearing their jerseys backward, or posing in other ways to hide team names.

This continued with other sets into the 1970s as you'll soon see... Topps again went with a tall boy design for their 1970 release and once again, West's card is one of the keys of the set.

Part of the 1970 Topps second series (#111-175), West is depicted staring off to the distance atop a blue background.

His name, position and Lakers affiliation are showcased in a large basketball graphic in the lower-right corner.

Like his 1969 Topps card, this one usually faces centering challenges and is easily dinged up because of its large size. With cartoonish fonts and bright color combinations, their design was very much a sign of the times.

West is shown dribbling in his Lakers uniform but notice his last name instead of the Lakers team name across the front of his jersey.

The fronts of many players' jerseys in this set lacked team names and instead either depicted the player's last name or nothing at all. 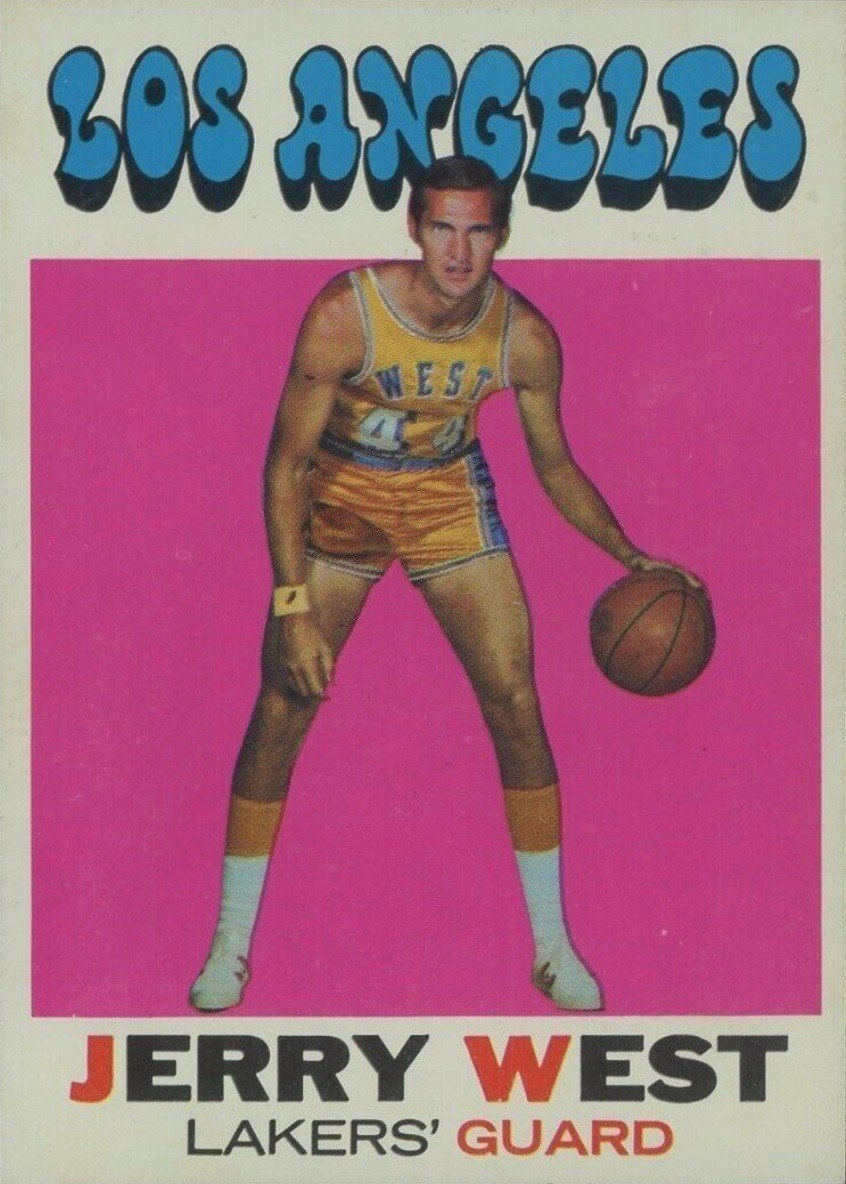 The 1972 Topps set is one of the better-looking sets of the decade and is headlined by the Julius Erving rookie card.

Not surprisingly, though, West's card is also among the key cards and features a nice image of him holding the ball atop a bright blue background.

One of the more noticeable things about the card is how the Lakers team name shoots up diagonally along the bottom of the card. In the 1970 and 1972 Topps sets, Jerry West had both a base card and separate All-Star card to his name.

In the 1973 Topps set, however, the two concepts were combined into one card that contained a specific call-out along the bottom designating him as an NBA All-Star.

Many cards in this set feature images that are rather bland, as often times players are simply posing in front of a wall.

West's card is definitely an exception, though, as we get a nice shot of him dishing the ball to a teammate.

One thing I've always found unusual about this card, though, is the cropped headshot within the white circle along the right side of the card.

It just seems a bit out of place. 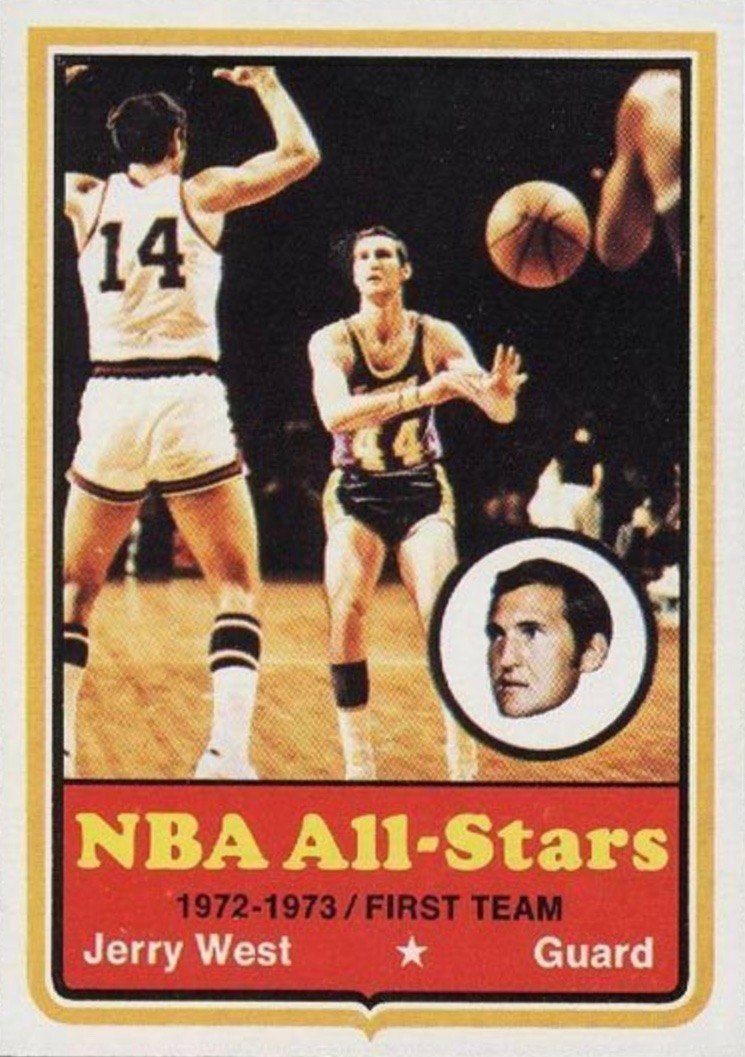 West finished off his legendary career as a professional basketball player in the 1973-74 season.

Though he played in only 31 games due to a nagging groin injury, he was still selected as a member of the All-Star team.

At the conclusion of the season, West and Lakers owner, Jack Kent Cooke, could not reach an agreement to renegotiate West's contract even though he could've very like still played at a high level.

Feeling deceived by Cooke and not wanting to play for any other team than the Lakers, West decided to hang up his sneakers for good.

Therefore, this would be West's last appearance on a Topps card.

A full-color image of West holds down the majority of the card but the Lakers team name in large red block letters along the right seems to take over things a bit. Based out of Cincinnati, Ohio, Kahn's is a meat processing company that has been in business since 1883.

From 1957 to 1965, Kahn's produced basketball cards intended as promotional items to be packaged and distributed with their products which is why you'll usually find these cards with stains on them.

Interestingly, as a regional issue, the cards only featured players who played for the Cincinnati Royals.

But...there was one notable exception to that rule: Jerry West.

Even with Oscar Robertson in their checklists, West is by far the key to the 1960-1963 Kahn's sets.

In lower condition, each of the cards can sell for hundreds of dollars while in higher grades they can sell into the thousands of dollars.

While the 1961 Fleer is considered West's mainstream rookie card, there are many in the hobby who consider the 1960 Kahn's to be his true rookie card. 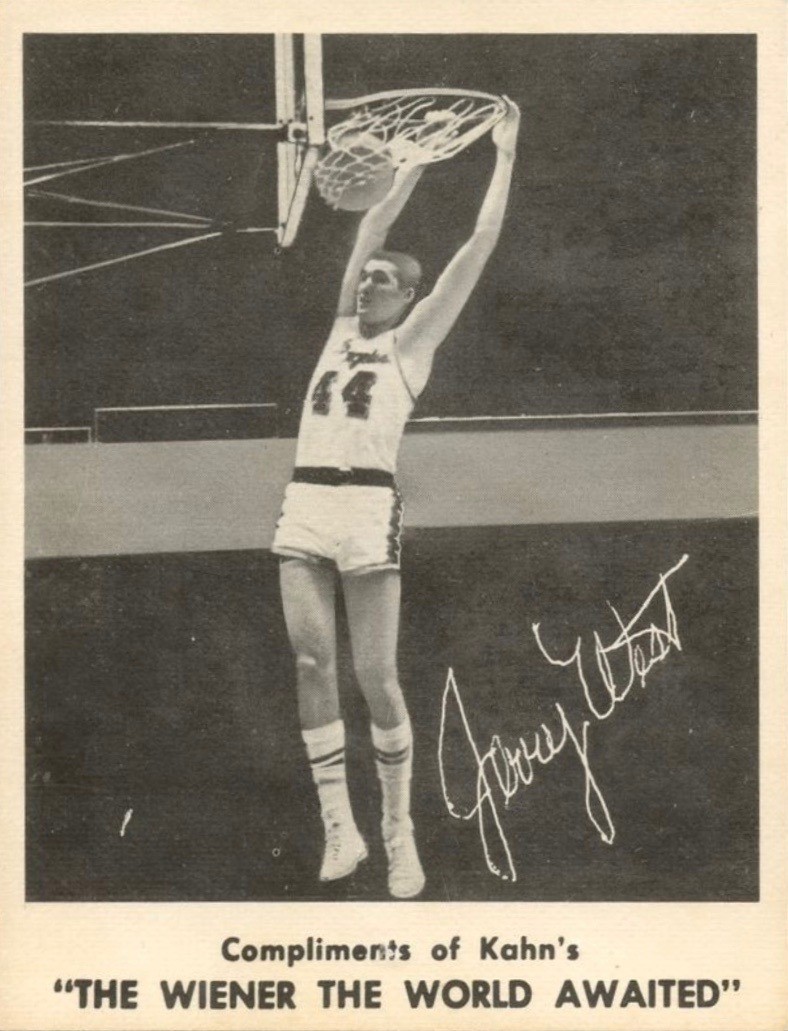 One of the most interesting basketball sets in the hobby, the 1968 Topps Test set consists of 22 black and white cards and was produced prior to their re-entry into the hobby with the 1969-70 set.

There are 15 Hall of Famers in the checklist and on each of their reverse sides is a small piece of a puzzle image of Wilt Chamberlain that can be fitted together with a complete set.

One of the most mysterious basketball card sets ever produced, there is even evidence to suggest the set wasn't produced in 1968 but in 1967 instead.

What is not mysterious is how this is easily one of West's most expensive cards. Finally, one of West's more amusing oddball issues is his 1969 Topps Rulers card.

These rulers were inserted into packs of 1969-70 Topps basketball cards and feature caricatures of some of the biggest NBA stars of the day lined up side-by-side with rulers intended to visually depict player heights.

The cards themselves are quite large measuring in at 2-1/2" by 9-7/8" and because of that they had to be folded to fit into the packs of cards in which they were distributed.

To be the inspiration for the NBA logo, you have to have made some substantial contributions to the game.

As such, Jerry West's impact on the game of basketball as a player, coach, scout and executive cannot be understated.

Some of West's accomplishments as a player included:

West led the Lakers to the playoffs in each of his three years as coach, and the team won 6 NBA titles under his leadership as general manager making him one of the most successful NBA executives of all-time.

No matter how he was involved in the game of basketball, West was successful.

And because of his legendary status, his basketball cards will be some of the most highly sought-after for years to come.