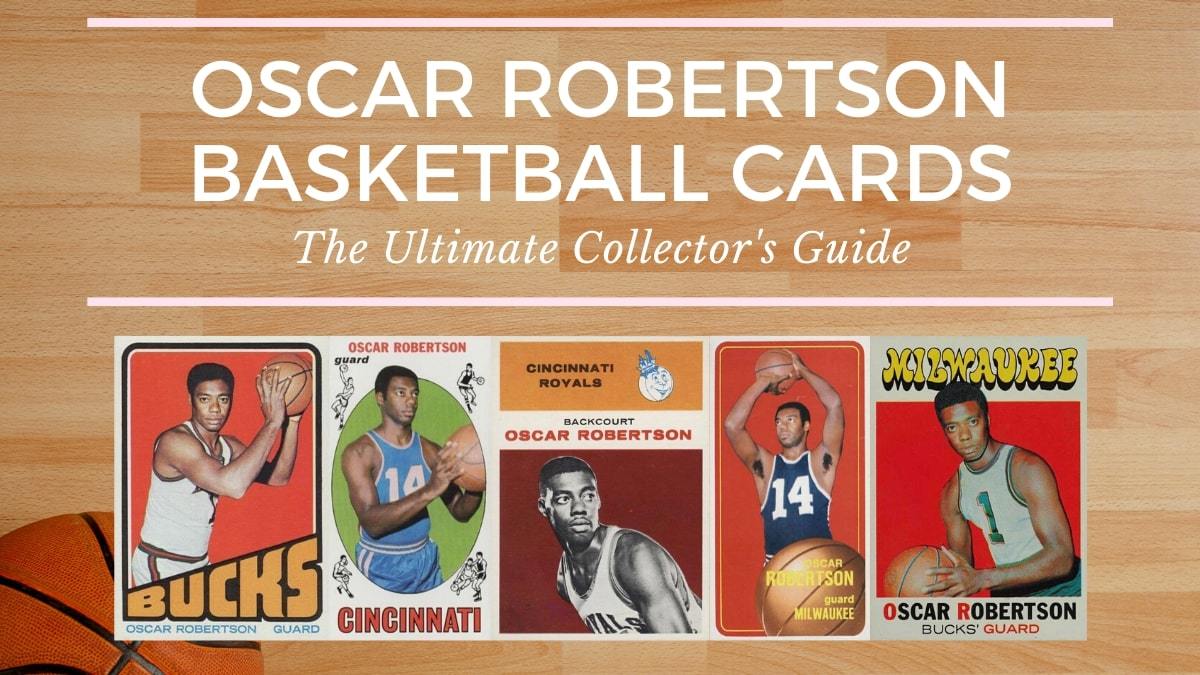 Because he was one of the greatest basketball players and athletes of all-time, Oscar Robertson basketball cards are some of the most coveted in the hobby.

While Robertson was an incredible scoring threat, what made him unique was his complete style of play as he was also a fantastic rebounder and passer.

As proof, in 1962 he became the first player in NBA history to average a triple-double after tallying 30.8 points, 12.5 rebounds and 11.4 assists per game.

Because of his status as a basketball icon, his cards are among the keys in every set in which he appeared.

And, in this guide, I take a look at some of the Big O's top mainstream and oddball issues in the hobby.

I'll get into some of Robertson's lesser-known oddball issues later, but let's start with his mainstream Fleer and Topps cards first.

First up is Oscar Robertson's 1961 Fleer rookie card which is one of the keys to the iconic set and one of the most valuable basketball cards in general.

While his famous triple-double season would come a year later, Robertson got off to a fast start right out of the gate during his 1960-61 rookie season in which he averaged 30.5 points, 10.1 rebounds and 9.7 assists per game.

That's something people forget about him: he averaged the triple-double during the 1961-1962 season but came within decimals of doing it in 4 of his other first 5 seasons.

The design on his rookie card is instantly recognizable as the black and white image of Robertson is featured prominently atop a dark red background while his name, position, and team affiliation round out the top. 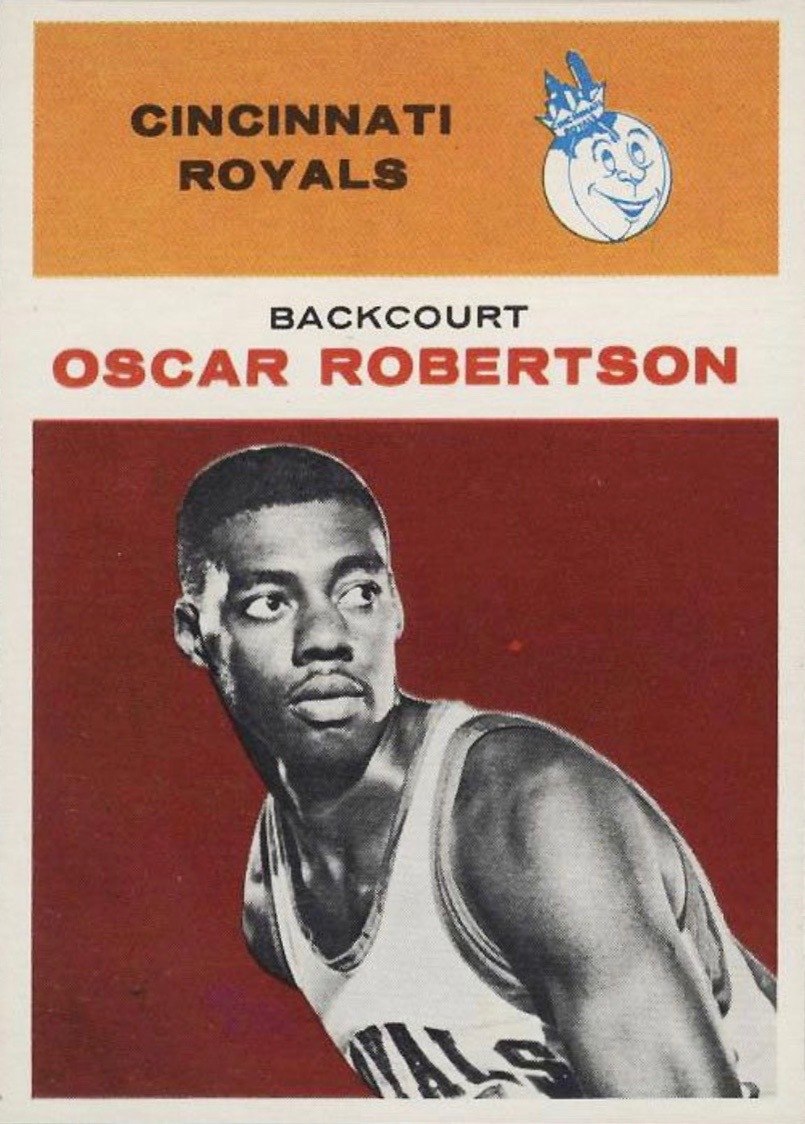 Like other big-name stars in the set, Robertson was also featured on a separate "In Action" card in which he "passes around the defense" against the Boston Celtics.

Judging by the trio of Celtic Hall of Famers appearing in the image trying to stop him, I'm not sure what else even a player like Robertson could do.

That's Bill Russell and Tom Heinsohn defending him down low while Sam Jones is not too far behind.

Assuming this picture was snapped during his 1960-61 rookie campaign, I guess he must not have been too intimidated by the Celtics as he averaged 28.9 points per game against him that year. You'll notice Robertson has his jersey on backward but that wasn't by mistake.

Topps didn't yet have an agreement with the league that would allow them to display unique team names like the "Royals".

So, many players in the set have their jerseys on backward or are simply wearing a t-shirt instead.

Those creative ways of hiding team names continued into the 1970s as you'll see on some of his other cards.

The set is loaded with key Hall of Famers like Robertson but the Lew Alcindor rookie stands atop them all as the most expensive. Topps again went with a tall boy design for their 1970 release and once again, Robertson is one of the keys of the set.

Part of the 1970 Topps first series (#1-110), Robertson is shown taking a jump shot in his brand new Milwaukee Bucks jersey.

Surprisingly, after 10 seasons in Cincinnati, the Royals traded Robertson to the Milwaukee Bucks ahead of the 1970-71 season where he and Lew Alcindor would immediately lead them to a championship after sweeping the Knicks in the 1971 NBA Finals.

Robertson's name, position and Milwaukee Bucks affiliation are showcased in a large basketball graphic in the lower-right corner.

While he's shown wearing #14 in the card, Robertson had changed to #1 for the 1970 season as Bucks teammate Jon McGlocklin was already wearing #14.

Like his 1969 Topps card, this one usually faces centering challenges and is easily dinged up because of its large size. For their 1971 set, Topps steered away from the tall boy design of the past couple years and instead produced cards that measured 2-1/2" by 3-1/2".

A sign of the times, the team names were spelled out across the top in a cartoonish font while other bright color combinations helped round out the unique design.

I've never seen a shot of Robertson wearing a white home jersey with dark shorts so unless he's got on the pants from his warm-up uniform then it looks like he may be wearing actual pants.

There are so many quirks with the Topps basketball sets of the late 60s and early 70s that it wouldn't surprise me.

You'll also notice that he was now showing his #1 jersey that the Bucks eventually retired. The 1972 set design is instantly recognizable by its upward sloping team names that stand out along the card bottoms.

Headlined by the Julius Erving rookie, this is one of the most desirable of all 1970s sets and Robertson is once again one of the keys.

After posing for the three previous Topps cards with his jersey on backward, Robertson finally got to wear it properly on this card. 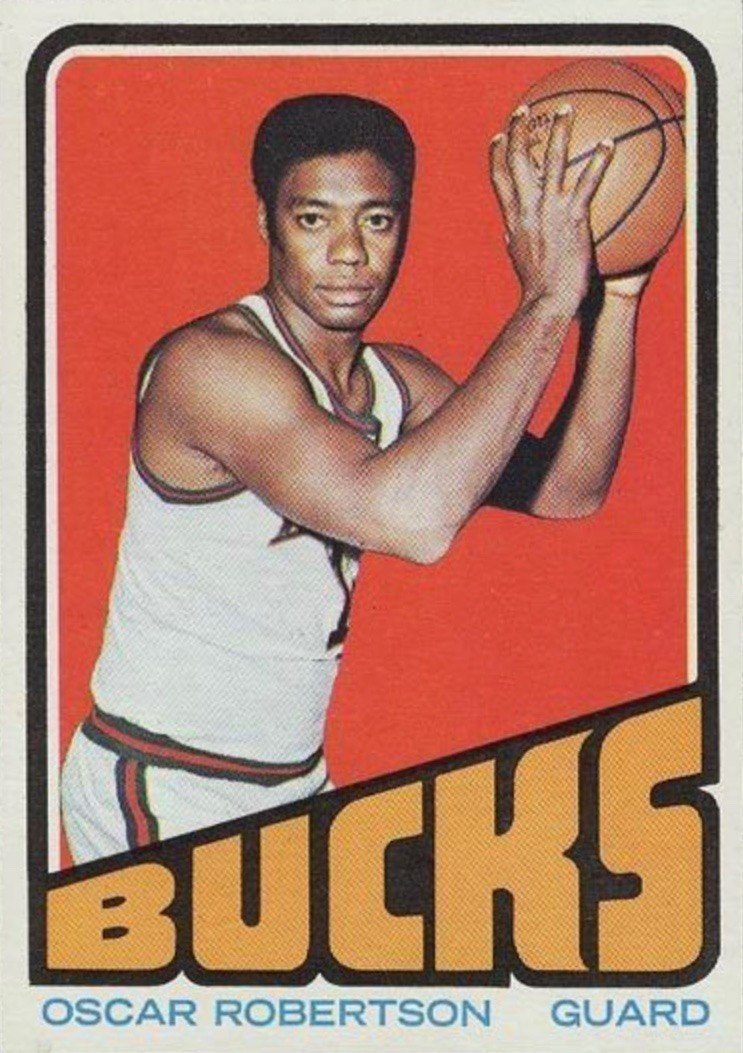 After helping the Bucks compile a 59-23 record and eventually falling to the Celtics in seven games in the 1974 NBA Finals, Robertson's absence was immediately felt the following season as the team dropped to 38-44.

And the Bucks still had Lew Alcindor on that roster.

Finally, we see a nice action shot of Robertson going up for the score against a couple of Bullets defenders. Although he had retired ahead of the 1974-75 season, Topps still included Robertson in their 1974 release.

An older Robertson is shown taking the ball up the court bordered by a pink strip while the Bucks team name dominates the right side of the card in huge block letters.

This is not even close to being one of his most expensive cards but is still a must-have for any Robertson collector as it's his last Topps issue. First up are his Kahn's Wieners cards that were produced by the famous meat processing company out of Cincinnati, Ohio.

From 1957 to 1965, Kahn's produced these basketball cards to help promote their products.

Focusing primarily on the local Cincinnati Royals as these were regional issues, the company did interestingly decide to include Jerry West as well.

While the 1961 Fleer is considered his mainstream rookie card, there are many in the hobby who consider the 1960 Kahn's to be his true rookie card.

That is reflected by the huge price tag that this card commands in high grade. On the 1961 Kahn's card, we get a different image of the young superstar and you'll notice his first name in the facsimile signature is simply "O" as opposed to his full name the year before. The unique thing about this card is that it depicts Robertson receiving a pass which was an interesting choice that you don't see on too many basketball cards. Robertson's 1963 Kahn's card looks nearly identical to his 1960 Kahn's card except that the image has been cropped differently and the card features a full border. For their 1964 set, Kahn's switched from black and white images to full color photos.

Robertson appears in two different poses in this set, one from the side and one facing forward although I don't think one variation is necessarily more valuable than the other. Robertson's 1965 Kahn's card looks almost identical to the side-facing variation from the year before except you'll notice that the image has been cropped differently and is zoomed farther inwards. One of the most mysterious basketball sets ever produced, the 1968 Topps Test set features only 22 cards.

There is even evidence to suggest the set wasn't produced in 1968 but in 1967 instead.

These cards were created prior to their re-entry into the hobby with the 1969-70 set and their reverse sides contain a small piece of a puzzle image of Wilt Chamberlain that can be fitted together with a complete set.

Along with his 1961 Fleer and 1960 Kahn's cards, this is one of his most expensive as it's so hard to find in top grade. 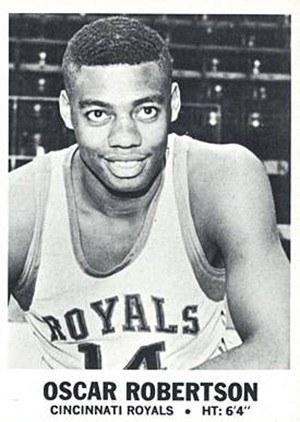 Featuring caricatures of some of the biggest NBA stars of the day, their fronts listed the player's height as he is shown lined up side-by-side with a ruler.

The cards themselves are quite large measuring in at 2-1/2" by 9-7/8" and because of that they had to be folded to fit into the packs of cards in which they were distributed.

Another rare set that you don't see too often, these 2-1/4" by 3-1/2" cards are fragile as they were printed on thin stock by Comspec, a California-based company.

Robertson is one of 36 players in the set and you'll notice the image is the same that was used for his 1972 Topps card. Given away with Icee Bear Slurpee drinks as promotional items, this 3" by 5" card contains the same image used on his 1969 Topps card. Oscar Robertson was inducted into Hall of Fame in 1980 for his individual accolades and later in 2010 for being part of the historic 1960 United States men's Olympic basketball team.

In high school, college and the NBA, Robertson dominated with his superior scoring ability and all around skillset.

He was one of the most complete players that ever played.

Some of Robertson's accomplishments as an NBA player included:

Robertson was also one of the greatest college basketball players ever as evidenced by the fact that in 1998, the United States Basketball Writers Association honored Robertson by renaming the College Player of the Year Award to the Oscar Robertson Trophy.

And because of his legendary status, his basketball cards will be some of the most highly sought-after for years to come.