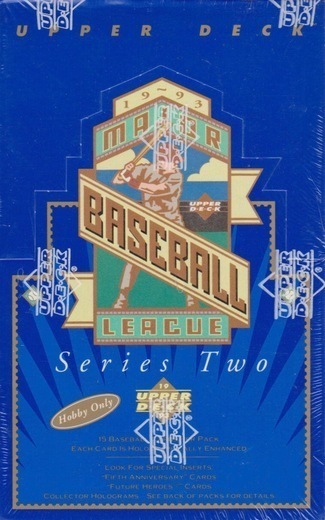 One thing is instantly noticeable about the 1993 Upper Deck baseball card set:

the imagery and design of these cards are impeccable.

Upper Deck continued to set the bar when it came to innovative hobby design standards and image quality, doing whatever it could to win collector favor from Topps, Donruss, and Fleer.

While many in the checklist have seen their values diminish due to massive print runs and market saturation, some can still be worth a respectable amount in top condition.

And in this guide, I’ll run through the eleven most valuable.

Like the 1993 Donruss, Fleer and Topps sets, large print runs saturated the market with these cards, driving down their values.

After splitting time between the Gulf Coast League Yankees and the Greensboro Hornets in 1992, Jeter was back with Greensboro in 1993 and began to stand out in Single-A play.

His .295 batting average, 85 runs scored, 18 stolen bases, and 11 triples provided a small peak into the kind of success he'd have later in his MLB career as a hitter at the top of the order.

Though he wouldn't make his MLB debut until 1995, Upper Deck did feature him in this set as part of its Top Prospects subset in Series 2 packs.

Like the other cards in this set, you can also find it as a gold parallel, noted by the Upper Deck hologram on the reverse appearing in gold rather than the standard silver color.

Gold parallels can be found in one out of every fifteen factory sets, making them far more scarce than the regular card, so much so that a PSA 10 example can fetch $4,000 or more at auction. 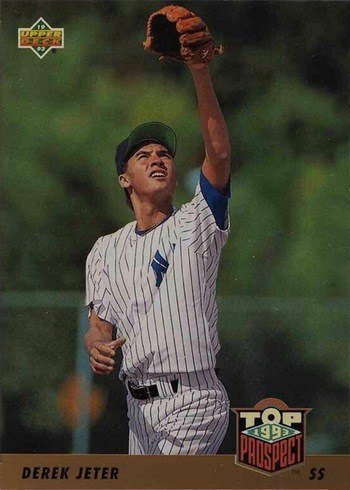 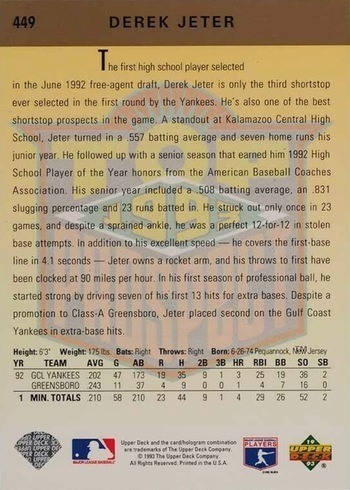 His performance was enough to earn Rookie of the Year honors, a Silver Slugger, and a 9th-place finish in MVP voting.

Part of Upper Deck's Star Rookie subset, Piazza's rookie card contains a fantastic image of the Hall of Famer ripping through the ball and displaying the kind of power for which he'd be famous throughout his career.

The reverse of the card mentions how his godfather and Dodgers manager, Tommy Lasorda, encouraged Piazza to make the switch from first base to catcher to speed up his ascent to the Majors.

That turned out to be great advice. 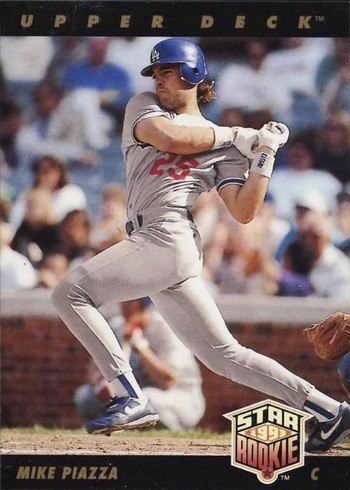 When Chipper Jones made his MLB debut in September 1993, he was the youngest player in the league.

Highly touted for his offensive and defensive skill set, Upper Deck speaks very highly of how Jones was expected to bolster an already impressive Braves team on the card's reverse.

They particularly mention how great of a shortstop he was and how "the Atlanta Braves' shortstop position will be safe for the next decade when Chipper Jones makes his Major League debut sometime in 1993."

It turns out Jones never spent much time at short while Jeff Blauser, Rafael Furcal, and others held down the position while Jones played mostly third base and outfield.

Regardless of where he was at on the field, Jones became one of the greatest switch-hitters of all time and was an easy first-ballot Hall of Famer in 2018. 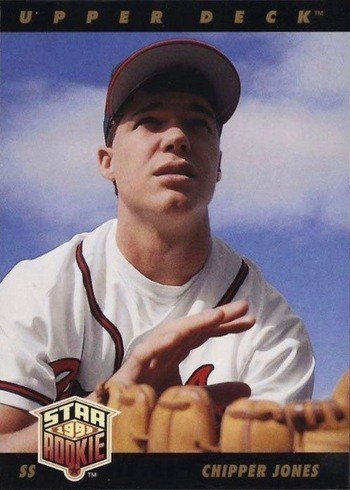 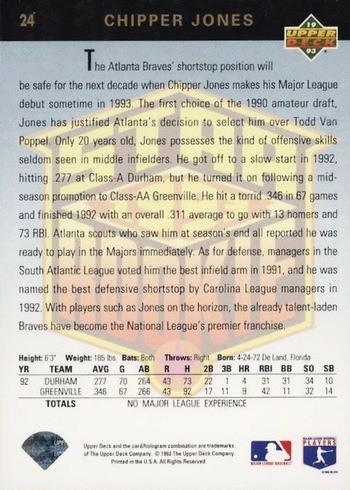 Already one of the game's biggest stars, Ken Griffey Jr. took his game to the next level in 1993, putting up the kind of power numbers he'd be known for the rest of the decade.

That kind of production became the norm until injuries started to nag him in his early 30s.

This card's imagery perfectly captures the legendary slugger watching a towering drive that was probably on its way to clearing the outfield wall.

Griffey remains popular throughout the hobby making his cards among the most desirable in any set in which he is featured. Before the start of the 1993 season, Nolan Ryan told the Texas Rangers that the season would be his last.

Citing age, family, and injuries, The Ryan Express was finally shutting down after a remarkable career that began way back in the late 60s.

To commemorate his "last run," Upper Deck released this insert card in Series 2 packs highlighting some of his career accomplishments and remaining schedule on the card's reverse.

Unfortunately, Ryan didn't get to finish his career the way he envisioned.

On September 22, 1993, Ryan felt a pop and a burning sensation after tearing a ligament in his elbow while pitching against the Mariners.

His legendary career had finally come to an end. 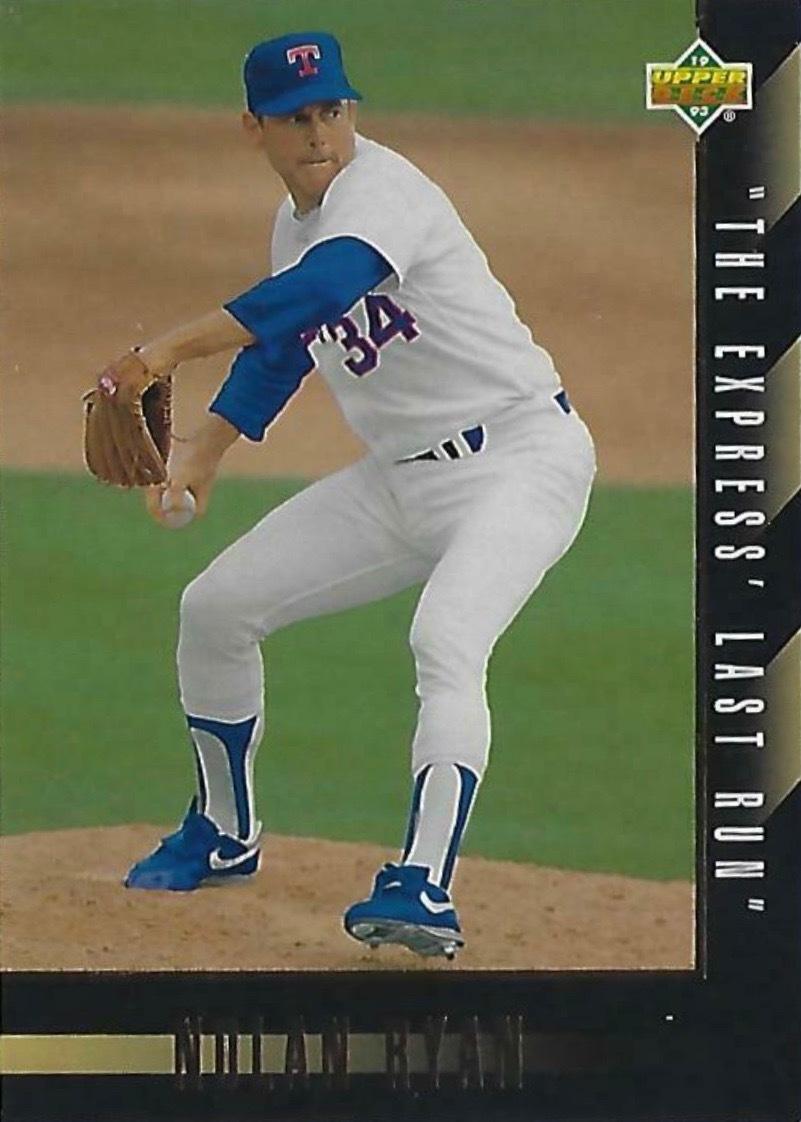 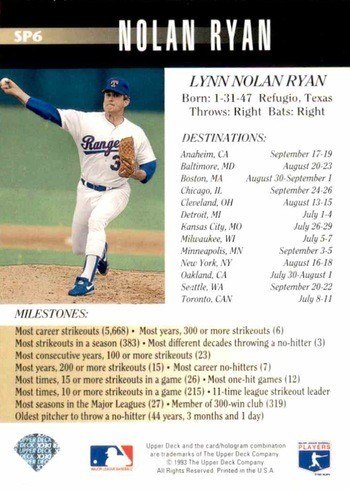 His ties to PEDs may forever cloud Manny Ramirez's legacy, but there is no question that he was one of his era's most talented hitters.

Year in and year out, Ramirez tormented opposing pitchers and always seemed to be a lock for 35-40 home runs and 120+ RBI.

While the PED scandal will likely remove him from any Hall of Fame discussion, for the time being, his rookie card remains among the most desirable in the set.

Ramirez made his MLB debut in 1993, but his first full season came in 1994 when he would finish a distant second to Kansas City's Bob Hamelin in voting for the 1994 Rookie of the Year Award. 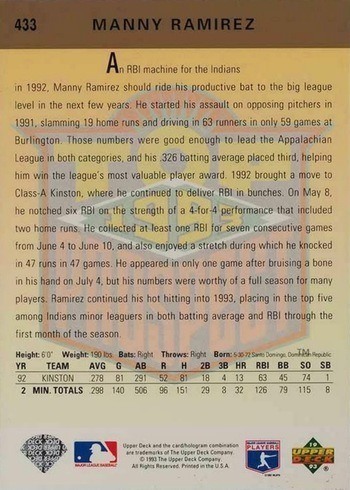 Cards #450 - 470 in the set are part of the Inside the Numbers subset in which famous sportswriter/analyst, Peter Gammons, provides his take on various players throughout MLB.

On the card's reverse, Gammons breaks down why Hall of Fame coach Bobby Cox decided to draft Jones instead of pitcher Todd Van Poppel, stating that Cox was concerned about Van Poppel's "fire."

I remember how huge Van Poppel was in the hobby when his rookie cards started making their way into circulation, as everyone thought he would be a superstar.

Cox's instincts turned out to be spot-on as Van Poppel never lived up to the hype over his eleven years in the Majors, and Jones became a Hall of Famer. 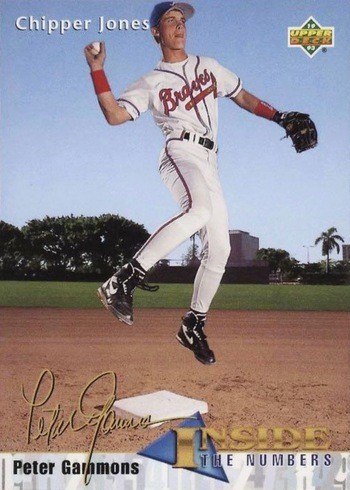 On September 9, 1992, Robin Yount knocked a single into right field that made him the 17th player to join the exclusive 3,000-hit club.

That hit also made the 36-year-old Yount the third-youngest player behind Ty Cobb and Hank Aaron to cross the mark.

Later that month, on September 30, 1992, an injured George Brett decided to suit up for a game against the Angels and went 4-5 in the process.

His final hit that night gave him 3,000 for his career as well.

Upper Deck inserted this card into Series 1 packs to celebrate each Hall of Famer's incredible achievement. 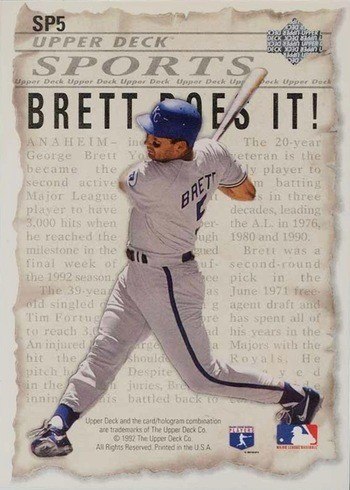 Ryan goes down in history as one of the greatest pitchers in MLB history and still holds many records to this day, most notably his seemingly unbreakable 5,714 strikeout record.

I appreciate how Upper Deck perfectly captured Ryan just how we remember him: throwing blazing heat towards home plate. As if the Braves starting rotation wasn't already intimidating enough with Tom Glavin, John Smoltz, and Steve Avery, Atlanta added Maddux to the mix when they signed him to a five-year deal.

On Opening Day in 1993, Maddux faced off against his former Cubs teammates and earned a 1-0 victory.

It was the first of another 20-win season for Maddux and his second of four-straight Cy Young Awards.

Glavine won 22 games, Avery won 18, and Smoltz notched another 15 victories, making this starting rotation one of the most dominant in baseball history. "The Iron Man" may be best remembered for his incredible streak of 2,632 consecutive games played, but he happened to be pretty good during those games, too.

Ripken is also the record holder for most home runs by a shortstop (431), a member of the 3,000 hit club, the 1982 Rookie of the Year, has two MVPs, appeared in 19 All-Star games, and holds eight Silver Slugger Awards.

The guy was awesome. Looking back on the 1993 Upper Deck set, the cards were undoubtedly well-designed and the photography was top-notch.

There are also some great rookie cards and plenty of stars and Hall of Famers to enjoy.

One thing is also very noticeable: there were so many subsets included within the checklist.

Clearly, card manufacturers at the time were trying to up the stakes in fighting for collector interest, and Upper Deck was no exception.

While many cards in the set have little to no value these days, some can still be worth decent money in top grade, especially the Jeter rookie.

It's always fun to look through this set from time to time as it was easily one of Upper Deck's best of the 1990s.