With so many great ones to choose from, how can you pick just one favorite Derek Jeter rookie card?

For me, when it comes to modern cards it comes down to value...

There are so many great designs on this list, but as a collector I always have value in the back of my mind.

So, I started wondering which of his rookie cards are his most valuable and I came up with this list after analyzing sales prices.

I know that many of the cards on this list are from 1992 and those are considered pre-rookies.

And, I also know the hobby recognizes only about 8 of his cards from 1993 to be actual rookie cards.

But I decided to mix and match anyway and toss cards from 1992 and 1993 all in this same list because it was more fun that way.

Without further ado, here are the 16 most valuable Derek Jeter rookie cards you can buy.

Still, this card in PSA 10 condition easily remains one of the most expensive modern baseball cards you can find.

The card itself is not scarce but finding one in pristine condition is extremely rare due to the ease of which the foil front chips.

Over time, this card could climb to the list of most valuable baseball cards if it stays consistently above $75,000 or so. A sign of the times of how cards were being massively printed from all angles during the early 1990's, here we actually have a card with Jeter from his high school days in Kalamazoo, Michigan.

Only 250 autographed versions were printed so they're extremely rare, especially in PSA 10 condition. At first glance, this may look like an ordinary 1993 Upper Deck Jeter card.

But, if you look at the Upper Deck hologram in the lower left corner of the reverse side of the card, you can clearly see it's a golden color as opposed to the regular silver version.

These gold parallels were only distributed in one out of every fifteen factory sets.

So, they're extremely scarce compared to the silver hologram versions distributed in packs and the other fourteen out of fifteen factory sets. 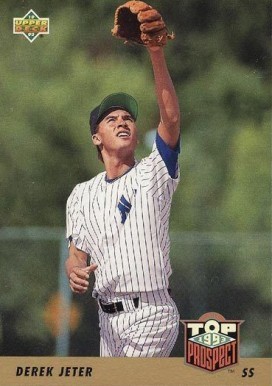 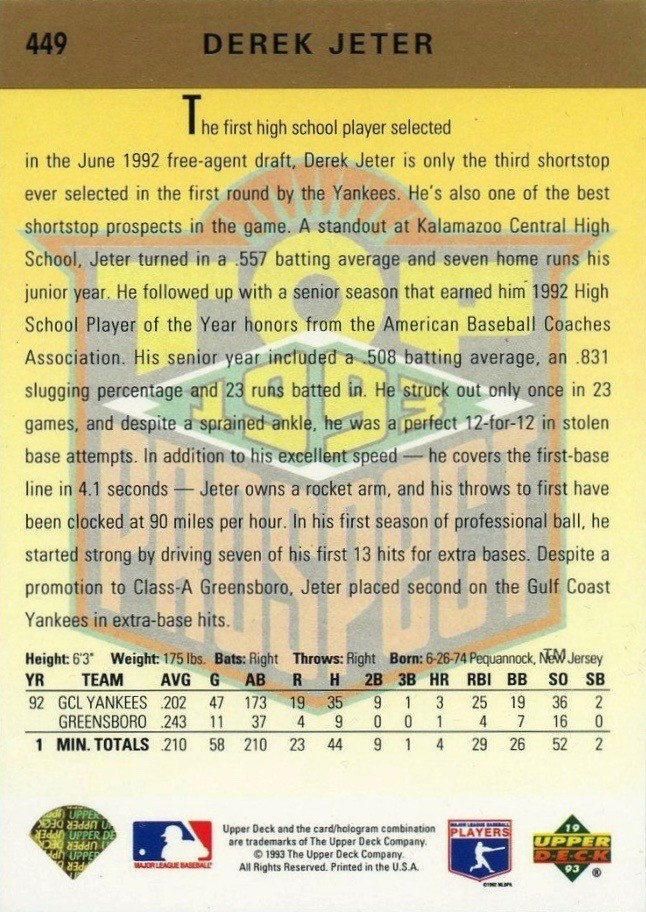 Front Row was one of the first to introduce the idea of the multi-color parallels that you commonly see today.

This set featured five different versions of this card: a base, gold, silver, purple promotional, and autographed versions.

His most expensive, the gold version, shows the same photo used in the Little Sun set mentioned previously and you can easily see the golden features along the top.

You could only find these in one of 5,000 factory sets. 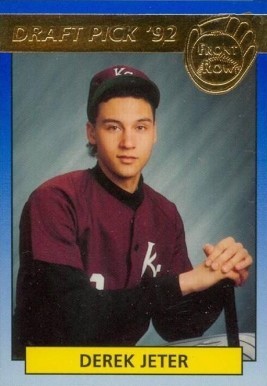 Below, you can get an idea of scale of the micro version compared to the regular version.

Personally, I'd be very nervous about buying one given how the PSA holder doesn't really look like it would do a good job of protecting it.

Just look at the image below and you can imagine it slipping and sliding around in the holder just begging for a corner ding or two. 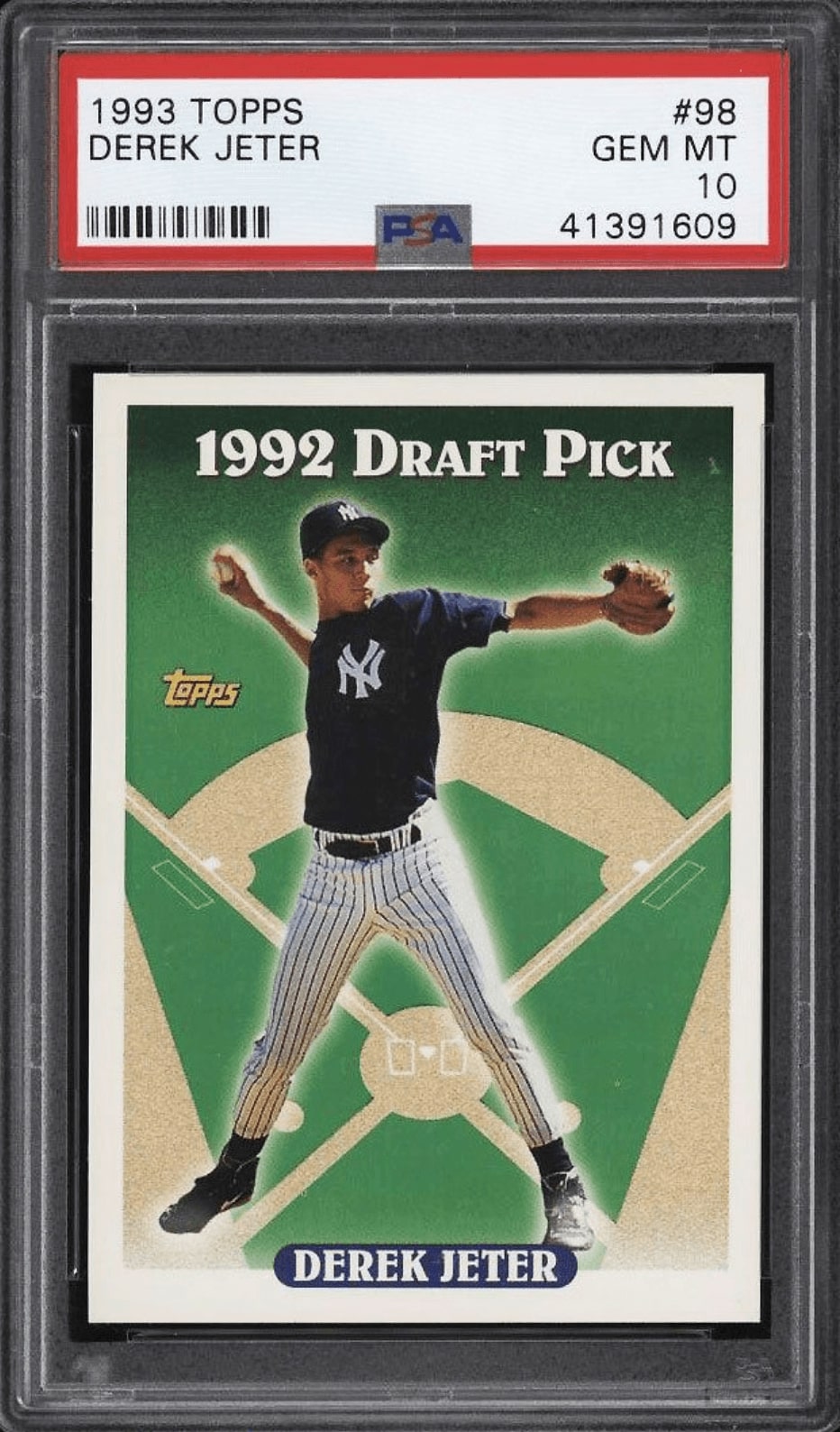 Next up is what I believe is one of Jeter's best-looking cards on this list.

The action shot of the high school prospect makes this card instantly standout.

And his hand-numbered autograph out of 1,125 adds a solid touch, too.

His Little Sun autograph may be more expensive, and I get that since it's more rare, but in terms of eye appeal this one blows the other out of the water. 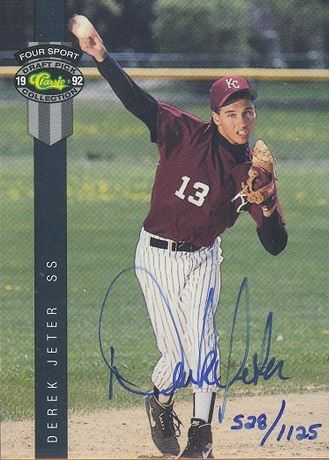 This is one of the first cards in which you'll see Jeter in a Yankees uniform, albeit from his time with the Gulf Coast Yankees, the rookie affiliate of the New York Yankees.

It's a really sharp-looking card showing Jeter likely doing what we'd see him do so many times throughout his career: throwing someone out at first. 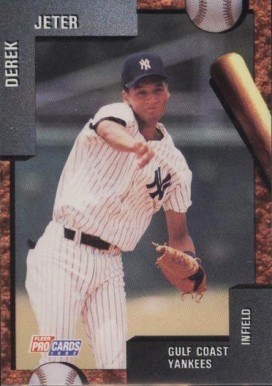 This parallel to the base 1993 Topps card was part of a very limited run of factory sets distributed at Mile High Stadium and select stores in the Denver area.

This gold embossed version is also easily distinguished by the emblem in the lower right corner.

These limited sets were a great way to welcome the Rockies into MLB and these particular Jeter cards have and like will continue to steadily rise in value. 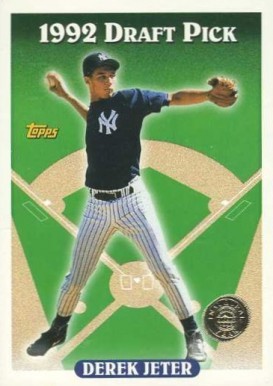 The other Jeter card from the 1992 Little Sun set shows Jeter in his Kalamazoo high school uniform ready at short.

The pink and green multi-color lettering along the bottom was a sign of the times.

Not as valuable as the autographed version, this card can still command top dollar. There's really not much else to say about this silver parallel of the 1992 Front Row card other than there were 10,000 of these distributed inside factory sets.

I'll never forget, someone actually got me one of the base sets for my birthday when I was a kid and I kept it sealed for a couple decades.

I sent in my Jeter to PSA and it came back a 9 so I couldn't complain.

Also interesting to note was that Jason Giambi was in this set, too. Jeter had four different 1993 Classic Best cards in total, one of which is this autographed version.

Each of them is hand-numbered out of 1,200 and feature Jeter's signature in big blue ink.

The card itself shows a great action shot of a young Jeter taking a nice cut. Also limited in distribution, these versions easily standout with the emblem in the lower left corner.

So, why aren't they as expensive as their Colorado Rockies counterparts?

There are more than double the amount of these graded in PSA 10 condition. The card features a great close-up image of Jeter posing as if following through a swing.

These cards are hard to come by in any condition but if you're looking for PSA 10 quality then you'll have to pay up for one. 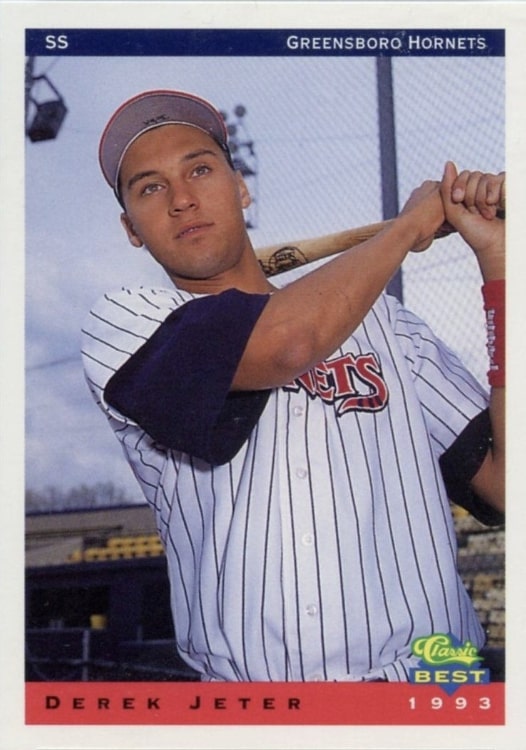 I always had a soft spot for Fleer and think they had some great designs over the years.

That's a mouthful to say and it will cost you a handful of cash to buy one of these in PSA 10 condition. 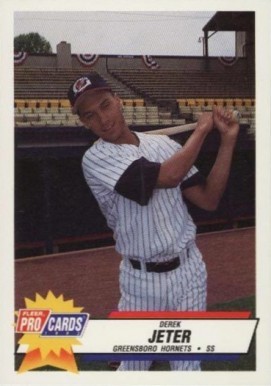 Next on the list is yet another offering from Classic.

As you can imagine, these cards can easily show wear and tear because of the dark blue borders.

A young Jeter looks ready to react to a just-hit ball in this nice action shot of the budding superstar.

I always thought the gold foil trim on this card added a nice design touch. Front Row came back in 1993 to offer this card of a young Jeter that's got much stronger eye appeal than their 1992 offering.

Which isn't hard to do.

You could have put any action shot on here and it would have been better than that yearbook picture they used in 1992. I played shortstop up through high school and looked up to him, how he carried himself and how he played the game.

For all of his great accomplishments, I always put how good of a ballplayer Jeter was into perspective by asking this question: "If you had to create a Mt. Rushmore of New York Yankees, who would you leave off a list of Babe Ruth, Lou Gehrig, Joe DiMaggio, Mickey Mantle, and Derek Jeter?"

Some people may easily cast aside Jeter but I don't think it's that easy...

The all-time Yankees hit leader (3,465)--not to mention other Yankees records--would also go on to achieve the following:

One of the things that has always stood out to me was that Jeter never won an MVP award.

And when I look at his stat lines, I get it...the numbers were never quite there.

So, how can a guy who never won an MVP be considered part of a Yankees Mt. Rushmore?

Somehow he was just bigger than numbers...