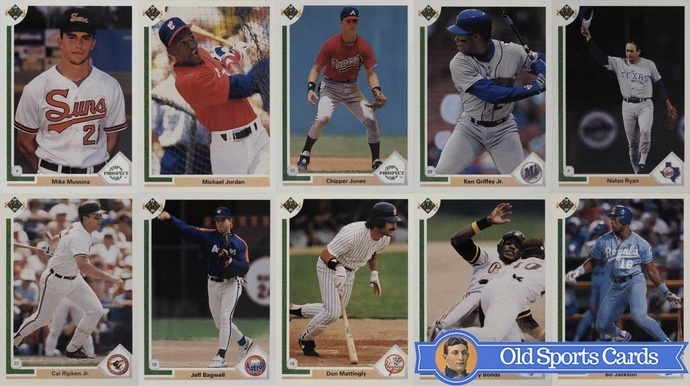 During the company's third year in the market, 1991 Upper Deck baseball cards left collectors salivating for another set of cards with premium imagery.

They also included some of the first autograph cards to make things even more interesting.

Those chase cards, along with all of the other great rookies and stars of the day made collectors more than willing to go through pack after pack in search of cardboard gold.

Sadly, while many in the set don't have any value these days, there are still some that can be worth a respectable amount in high grade.

And in this guide, I'll run through the thirteen most valuable to look for.

Like the 1991 Donruss, Fleer, Stadium Club, and Topps sets, far too many were printed and the market is over-saturated with them.

We start off the list with this Nolan Ryan autograph card that was actually part of a nine-card insert series that showcased the career highlights of the legendary fireballer.

Card #18 served as the checklist for the series (numbered #10-18) and to make them a bit more interesting for collectors to chase, 2500 copies of this card featured a genuine Nolan Ryan autograph.

The artwork on the card is fantastic and depicts Ryan with each of the four ball clubs he pitched for as well as an image of him throwing a football.

Upper Deck must have really liked the idea of Ryan throwing a football because they also showed him doing so on card #774 in the 1989 Upper Deck baseball set.

Interestingly, on every 100th version of this autographed card, Ryan would add "Strike Out King" for an additional touch of creativity although I am unsure those versions are anymore valuable than their regular counterparts. 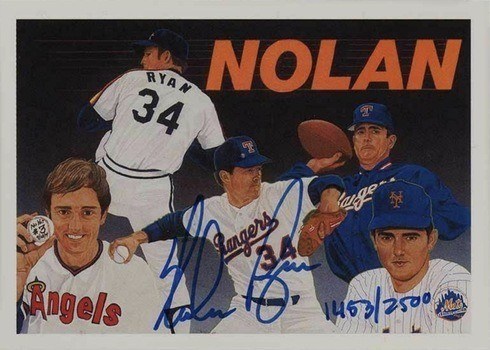 Card #27 was the checklist of the series as was the case with Nolan Ryan, Aaron also signed 2500 copies of the card.

The artwork on this card is also brilliant as we are treated with multiple images of Aaron with the Milwaukee and Atlanta Braves.

If I had to pick between the Ryan or the Aaron autograph card, I'd choose the Aaron as the one with stronger eye appeal.

But, I wouldn't complain with owning either one of these great inserts. 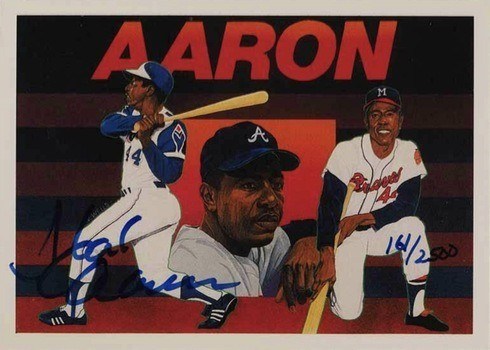 This Michael Jordan baseball card was all the rage when 1991 Upper Deck hit store shelves.

But, that's not what's being captured in this image.

Instead, Upper Deck snapped this image of the basketball legend taking batting practice with the White Sox before a home game in 1990 at Comiskey Park.

I love the "SP" that Upper Deck assigned to this card in the sequence to signify that it was a short print.

Technically, yes, it was a short print but still printed in massive numbers. 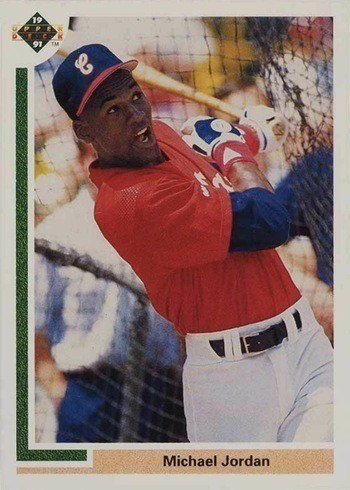 On May 1, 1991, Rickey Henderson snapped Lou Brock's career record for the most stolen bases in MLB history when he snagged his 938th stolen base.

To commemorate the special occasion, Upper Deck released this fantastic card with both Brock and Henderson holding a base with "939" printed on top of it.

There are two variations of this card: one with the May 1, 1991 date printed on the base and one without it.

PSA has graded about three times as many more of the variations with the date in PSA 10 grade, resulting in a price premium on the version that lacks the date.

Henderson would go on to steal an incredible 1,406 bases over his Hall of Fame career.

It's a record that will likely never be broken.

No Date On Front 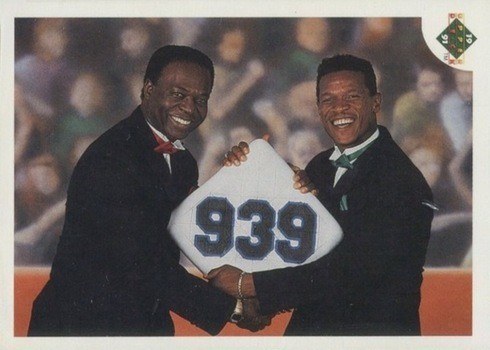 With Date On Front 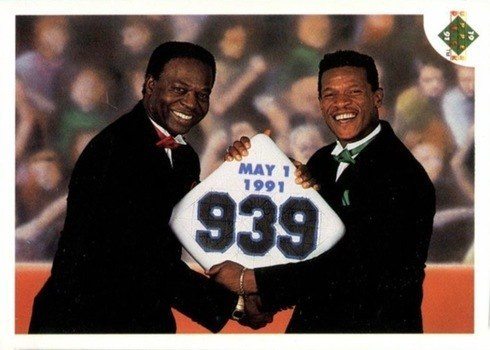 I am no mathematician, but I can imagine that the odds of setting two major baseball records on the same day has to be minuscule to say the least.

But, that's exactly what happened on May 1, 1991 when Rickey Henderson broke Lou Brock's career stolen bases record and Nolan Ryan threw his seventh and final no-hitter.

To commemorate that incredible day in baseball history, Upper Deck released another "short print" which they dubbed "A Day To Remember".

The two iconic images of the two in their special moments are shown at the bottom along with newspaper-style clippings at the top that explained their achievements.

Such a great card... Ken Griffey Jr. was always one of those guys that collectors were hoping to see when they ripped open packs of cards during the late 1980s through the 1990s.

And Upper Deck did an amazing job of presenting the Kid just the way we remember him: getting ready to send one deep with that sweet swing of his.

The photography throughout this set was top-notch but this card seems to stand in a tier all by itself.

They aren't worth what they once were but in PSA 10 condition, they can still be worth around $20 or so. 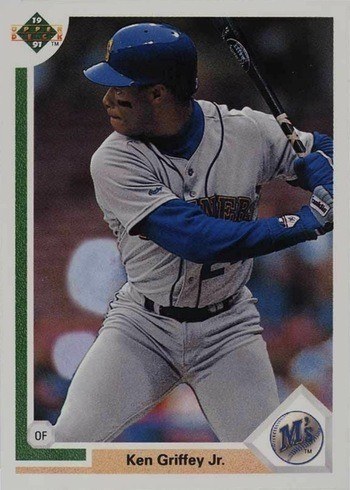 I remember seeing this card for the first time as a kid and having my mind blown.

The triple-image action shot of Henderson on the base path was an innovative design feature for the time and did a fantastic job of showcasing the speedster exactly as we knew him.

You'll notice that even though the image was horizontal that Upper Deck didn't change the vertical frame of the card.

Maybe it was on purpose.

Maybe they didn't have the ability.

Regardless, it does nothing to take away from a card with tremendous eye appeal. Bo Jackson was one of the hottest names in sports during the late 80s and early 90s as he earned fame for being a two-sport star.

Many remember him with as a football stud the Raiders, especially thanks to his legendary unstoppable running power on the Nintendo video game "Tecmo Bowl".

And most remember his time in baseball as a member of the Kansas City Royals.

After injuring his hip during a playoff game against the Cincinnati Bengals in early 1991, though, the Royals released him ahead of the 1991 MLB season. Though the Royals had given up on Jackson's baseball career, the Chicago White Sox quickly jumped at the chance to plug him into their roster and signed him to a three-year deal.

Jackson played in just 23 games during the 1991 season before missing the entire 1992 season to rehabilitate his surgically-repaired hip.

He was back in action for the White Sox in 1993, playing in 85 games and even helping the team to the playoffs.

His best baseball days were behind him but he was still a fan favorite.

His iconic status help keep his baseball cards among the most desirable in any set in which he appeared. 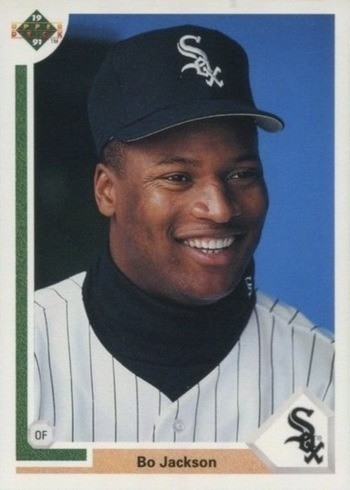 Remarkably, Nolan Ryan was 44 years old when he was pitching during the 1991 season.

And, with the image on this card of Ryan saluting the crowd and the insert series I mentioned earlier that commemorated his career up to that point, I have to think Upper Deck thought he'd be done.

But, he'd pitch two more seasons after that.

And he may very well have kept going had he not injured his arm late in the 1993 season. 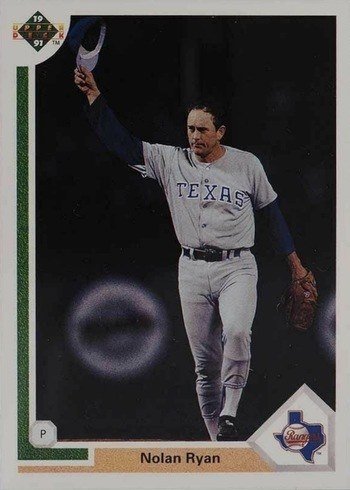 Next up is the Chipper Jones rookie card, one of several rookie cards of stars and future Hall of Famers of the day.

A young Jones is listed as a shortstop in the lower left corner and the "Top Prospect '91" callout in the lower right.

Jones hardly ever played shortstop for the Braves once his career in the Big Leauges kicked off in 1993.

It actually looks like he's playing up towards the grass at third during a potential bunting situation.

Regardless, it's one of several great rookie cards of one of the game's greatest who ever played. 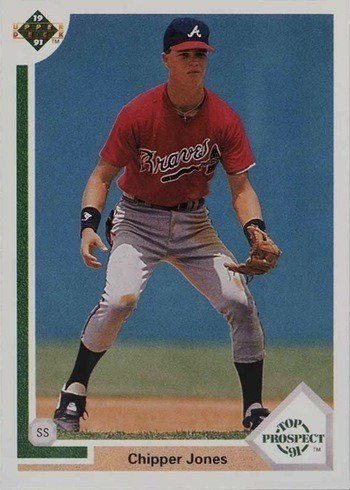 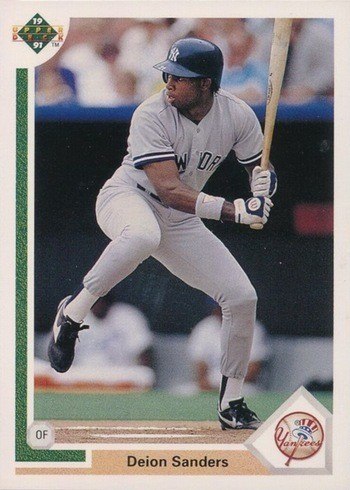 Prior to the sabermetrics craze, it looked like Mussina would never be inducted into the Hall of Fame.

His 270 career wins were impressive but not quite to that magical 300-win level.

And he never won any Cy Young Awards or ERA titles.

But, he did pitch in the brutal A.L. East, in hitter-friendly Camden Yards, in the middle of an era plagued by steroid abuse.

After you adjust for all that, it turns out Mussina was right up there with many other Hall of Fame pitchers in just how effective he was.

On his 1991 Upper Deck rookie card, Mussina is pictured with the Hagerstown Suns who were, at the time, the Double-A affiliate of the Orioles. Last but not least is the Big Hurt.

Even though Upper Deck only captured him sitting in the dugout, you can still get a sense of how large and intimidating Thomas was.

The legendary slugger would go on to be one of the most powerful and consistent hitters of his day, striking fear into opposing pitchers day in and day out.

This card is actually considered one of his rookie cards as he was not included in Upper Deck's 1990 release. 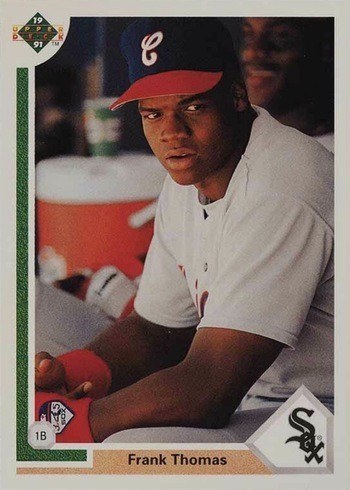 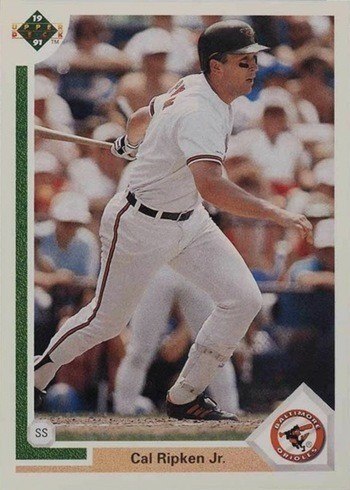 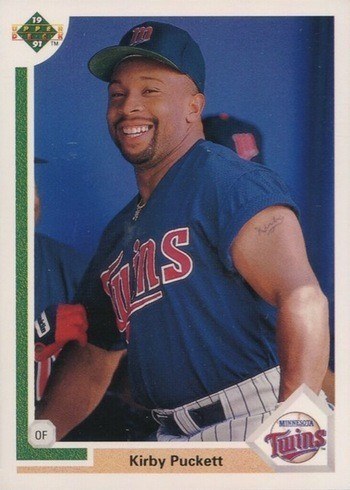 He was instrumental in helping those powerhouse Yankees teams of the late 90s and early 2000s win four World Series titles.

Sanders possessed an incredible hitting ability and Gold Glove talent on defense that made him one of the greatest center fielders of his era.

His popularity as a Yankee star helps keep his rookie cards in decent demand to this day. 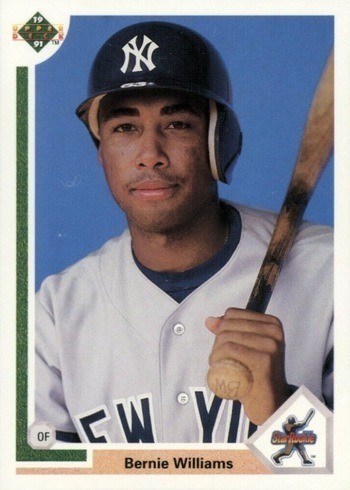 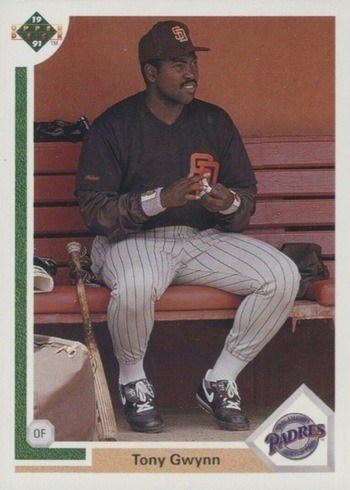 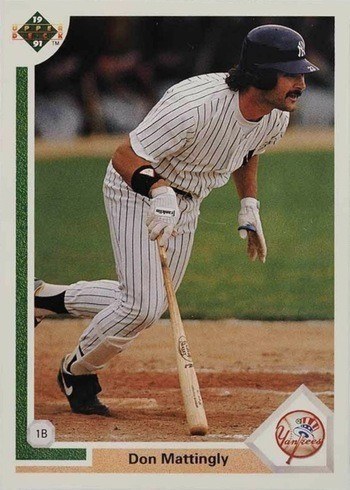 Jeff Bagwell is another guy who was also seemingly a borderline Hall of Famer.

He was the 1991 Rookie of the Year, won an MVP in 1994, and put up respectable career hitting numbers that made enough of a case.

But, there always seemed to be just enough speculation about Bagwell being caught up in the steroid scandal to make voters balk on giving him the green light.

No concrete evidence that Bagwell used steroids ever surfaced, though, and he finally made it into the Hall in 2017 during his seventh year of eligibility. 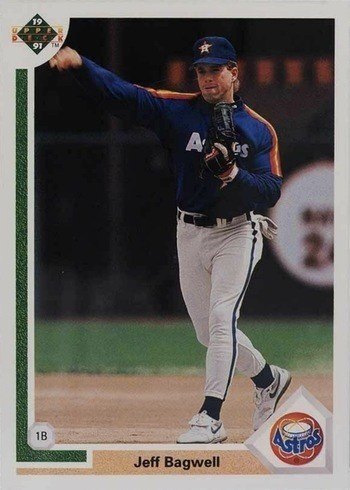 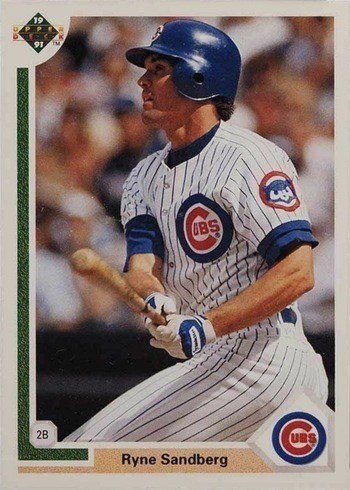 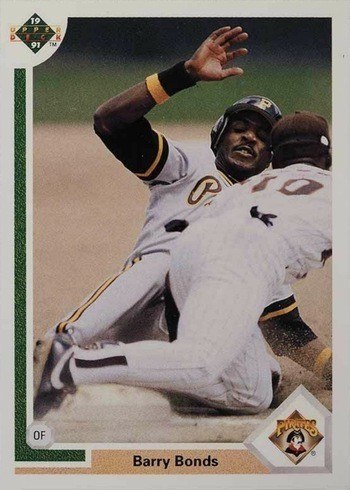 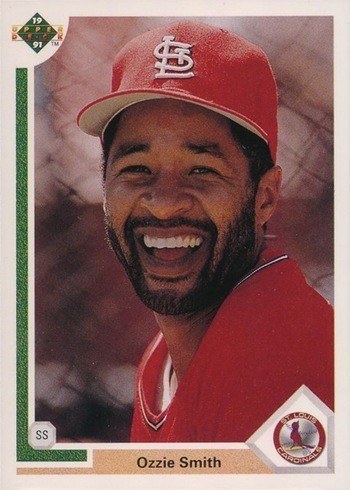 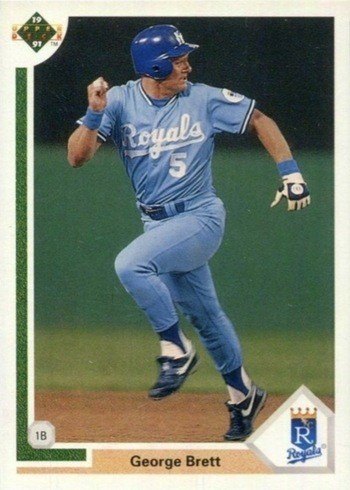 So there you have it, the thirteen most valuable 1991 Upper Deck baseball cards.

While many cards in this set are worthless today, the set is jam-packed with nostalgic value as many stars of the day were captured by terrific photography.

And as you can see, several stars and Hall of Famers still can have respectable value if graded in top condition. 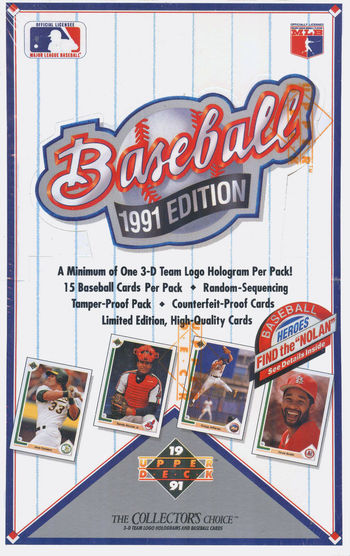 Monetary value aside, what can't be argued is just how large this set was.

In total, it contained 800 cards with the first series running from cards #1-700 while the high number second series finished things off from card #701-800.

Say what you want about this set, there's no questioning its aesthetic appeal and nostalgic value that remain to this day.