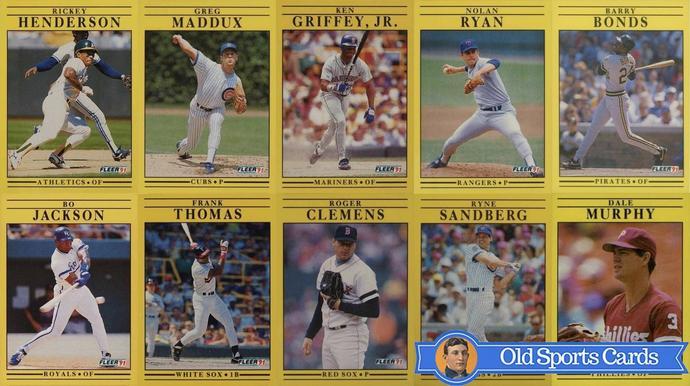 I will always remember the 1991 Fleer baseball card set for one simple reason:

it was the first factory set I ever owned.

My grandpa purchased the factory set at a flea market one year and gave it to me as a birthday present.

To this day, I still have it in my possession...

While monetarily it's not worth anymore today than when he bought it all those years ago, it will always fill me with nostalgia and fantastic memories of my grandpa and early collecting days.

In all, the 1991 Fleer set wasn't well-received by collectors as it lacked star rookie power and its design was considered to be underwhelming.

Regardless, in this guide, I'll run through the 10 most valuable to look for.

Like the 1991 Donruss, Leaf, Score, Topps and Upper Deck sets, millions of each card were printed and the market is over-saturated with them.

Bobby Bonds and Ken Griffey Sr. each had very respectable MLB careers and each would go on to make 3 All-Star appearances.

However, it was their sons who were two of the hottest and most promising young stars back in 1991 when Fleer created this "Second Generation Stars" card to commemorate them.

The card packs terrific eye appeal with its horizontal layout, bright yellow borders and bright smiles on the superstars' faces.

While at the time they were both on a Hall of Fame trajectory, only Griffey Jr. would make it as Bonds' career ended in controversy due to the PED scandal.

Though their legacies turned out very different, having both of these superstars on the same card gives it enough boost to take the top slot on this list. 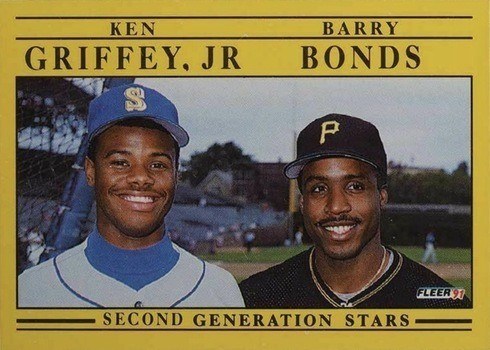 The fact that Griffey's third-year card is in the number two slot for this set speaks volumes of its lack of star rookie power.

And I'm not trying to take anything away from him--he was always among the top names of any set of the late '80s and early '90s.

But, neither Jeff Bagwell, Ivan Rodriguez nor Mike Mussina would appear until the 1991 Fleer Update was released.

And Chipper Jones wasn't in either the 1991 Fleer or Fleer Update set, for that matter.

I always wished that Fleer would've grabbed a better image for this card as it looks like Griffey has just popped out rather than hitting a towering homer. 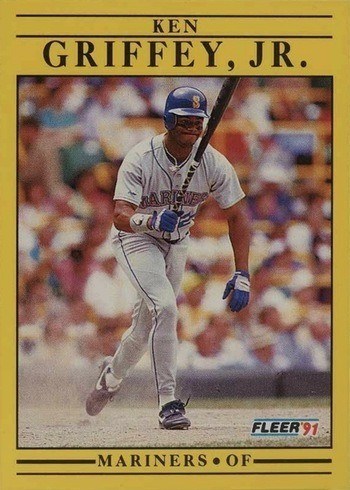 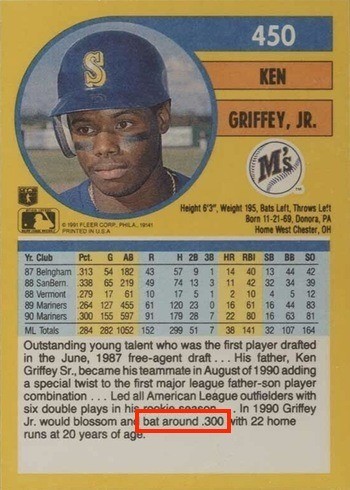 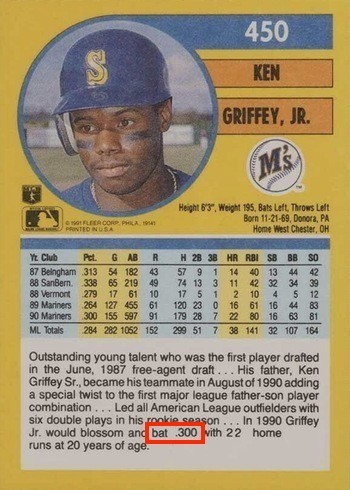 Even though he was clearly on the backend of his career in 1991, Ryan was still able to pitch effectively for the Rangers that season.

Oh, and don't forget...he also tossed his seventh career no-hitter in May that season against the Blue Jays.

Ryan was notorious for his blazing fastball but Fleer captured him perfectly in this image throwing his circle changeup, a pitch he threw only 14% of the time. 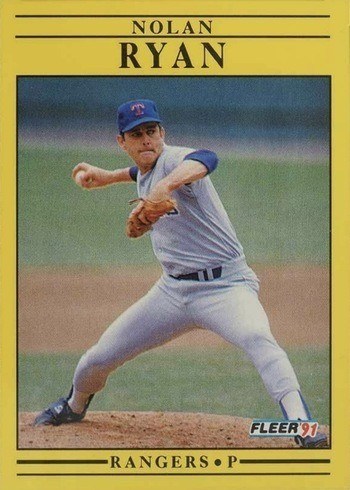 Throughout the 1980s it seemed like Don Mattingly was well on his way to being that next great Yankee to be enshrined in the Hall of Fame like those before him.

He was routinely appearing in All-Star games as well as racking up Gold Gloves and Silver Slugger awards.

He even had an MVP and batting title to his name.

However, injuries started to catch up to him and his ability to hit for power nose-dived in the 1990s.

But while Mattingly's career tailed off towards the end, his nostalgic factor is still there for collectors who grew up collecting in the junk era. 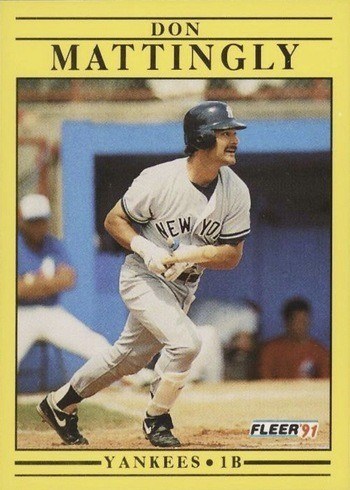 I think this is one of the best-looking cards in the entire set as Frank Thomas is shown taking a huge rip at the ball in that awesome retro Sox jersey.

Everyone knows that Thomas was a gigantic human being...but this card somehow makes him look even bigger.

Since he appeared in the 1990 Fleer Update set the year before, this is considered his second-year Fleer issue.

Thomas wasted no time getting to work in the Big Leagues as he would smack 32 homers, drive in 109 RBI and bat .318 on his way to winning the Silver Slugger award and finishing third in MVP voting in 1991. 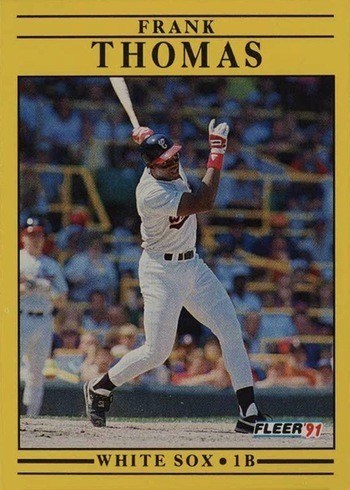 Cal Ripken Jr. was one of, if not the greatest, shortstops who ever played the game.

From 1983 to his retirement after the 2001 season, he appeared in an incredible 19-straight All-Star games.

With so many great seasons under his belt, you'd think it would be impossible for one particular season to stand above the rest as his greatest.

Well, it turns out that the 1991 season was likely his greatest as he set career highs in home runs (32) and RBI (114) on his way to earning MVP, Gold Glove and Silver Slugger honors.

Like the shot of him scooping up the ball on this card, Ripken was scooping up all the awards that year... 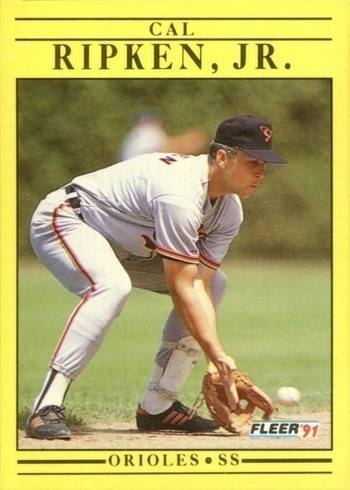 Was any athlete hotter than Bo Jackson during the late '80s and '90s?

Maybe Michael Jordan...but not many others.

To this day, I love watching old highlights of Jackson throwing people out with his cannon of an arm.

But Jackson could absolutely crush the ball, too, as he's clearly about to do in this shot of him in his Kansas City Royals uniform. 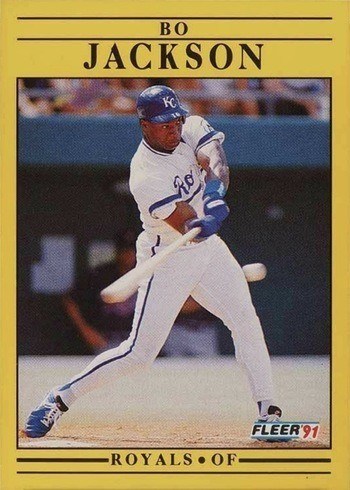 Most Rickey Henderson cards show the speedster either in the middle of swiping a bag or in his compact hitting stance.

However, this one shows Rickey headed back to safety trying not to get picked off while leading off the base.

To my knowledge, a baserunner being picked off is not counted in the "caught stealing" category, of which Henderson is the all-time MLB leader.

I can't imagine it happened too frequently to him, however.

This is just one of those images that captures the true essence of a legend like Rickey and an opposing team trying to prevent him from wreaking havoc on them.

It may be an odd action shot but I really like it... 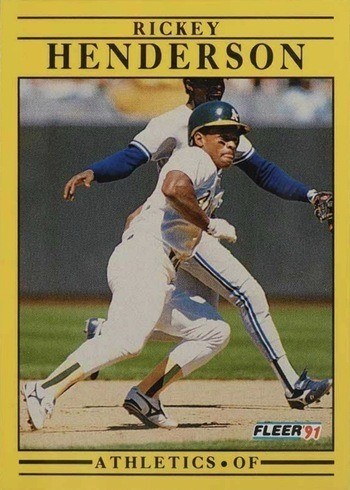 Even though Bonds' legacy will forever be cloudy, that doesn't mean demand for his cards has dried up completely.

This one may not be worth much but you should check out the prices that some of his rookie cards can fetch...

Bonds had an incredible year in 1991 as he'd go on to pick up his second Gold Glove and Silver Slugger honors...and almost his second MVP, too. 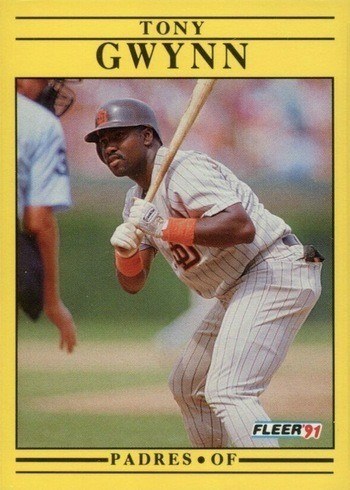 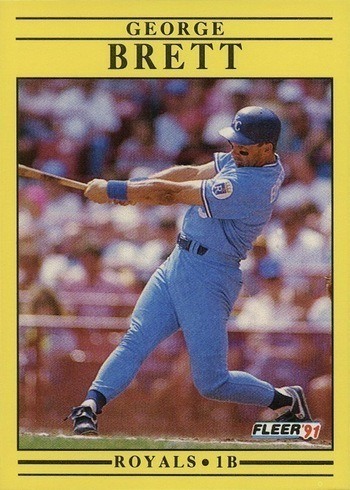 Another fantastic ballplayer of the era and easy fan favorite, Kirby Puckett rounds out our list.

While he only played in 12 seasons, Puckett was consistently one of the best in the game as he appeared in 10 All-Star games, won 6 Gold Gloves and Silver Sluggers, and helped the Twins win 2 World Series.

To say the least, Puckett could play.

And he clearly loved doing so as you'd almost always see him with a huge smile on his face. 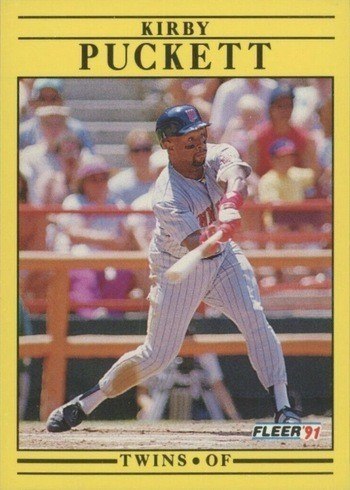 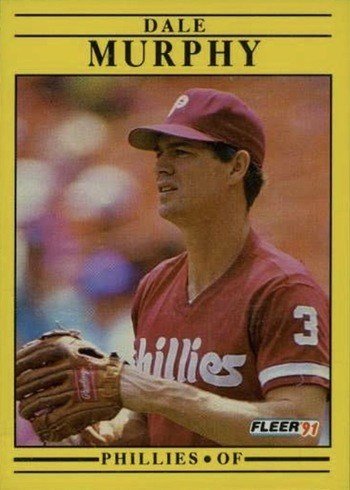 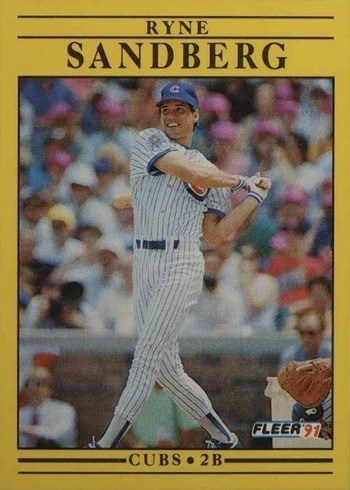 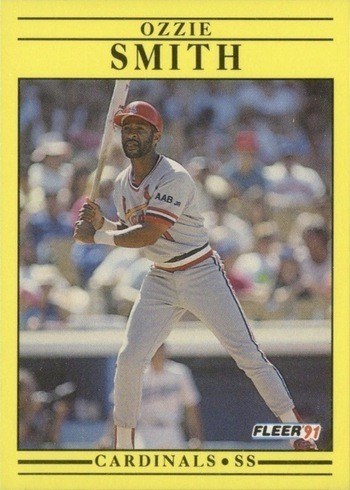 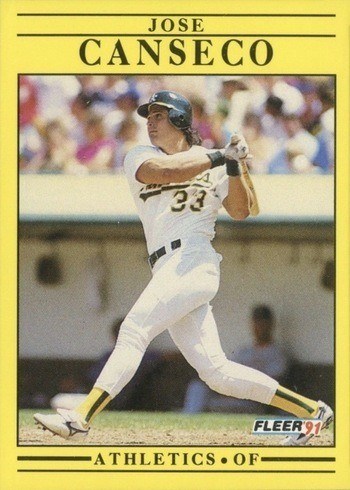 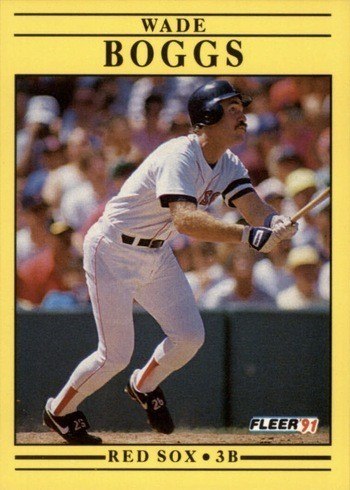 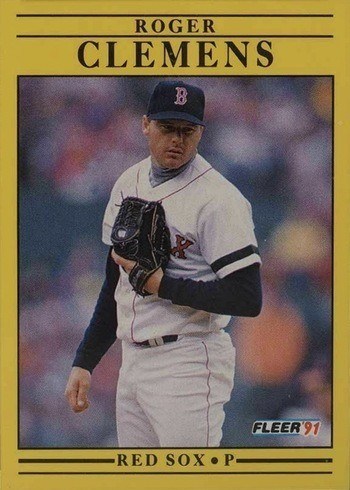 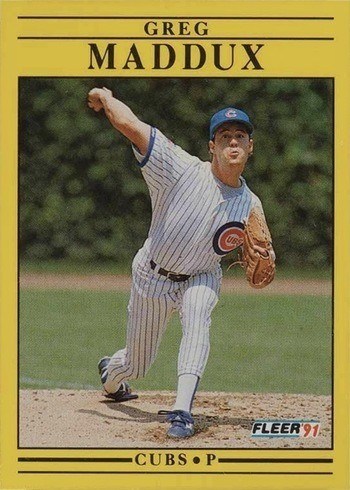 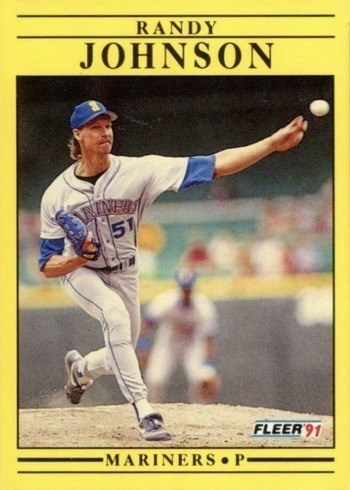 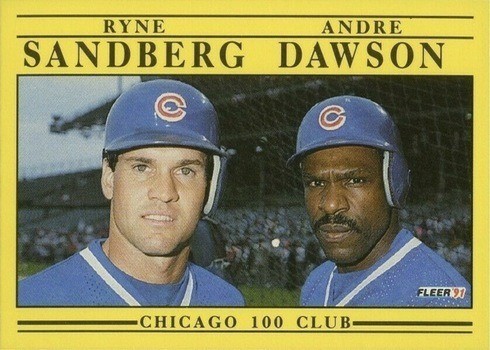 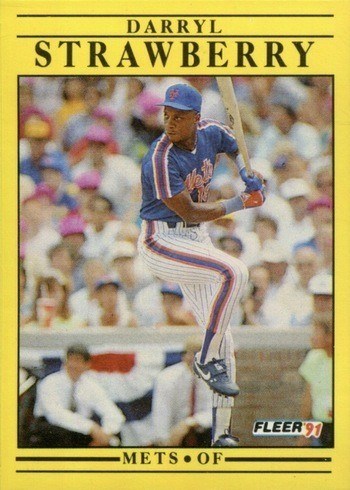 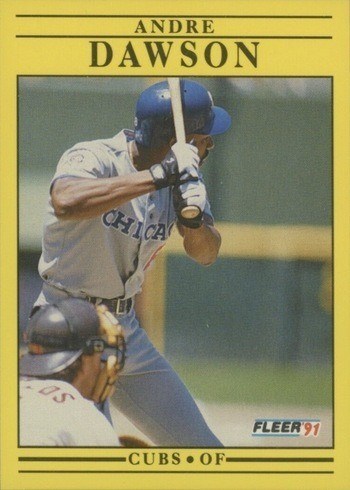 So there you have it, the ten most valuable 1991 Fleer baseball cards.

Most of the cards in the set are worthless and none of them really make sense to have professionally graded as even the values of the top cards in PSA 10 condition don't justify it. Many collectors, like myself, still do have a bit of nostalgia for the set, though.

And whether you love or hate the 720-card set, it did contain some recognizable subsets and inserts, including: