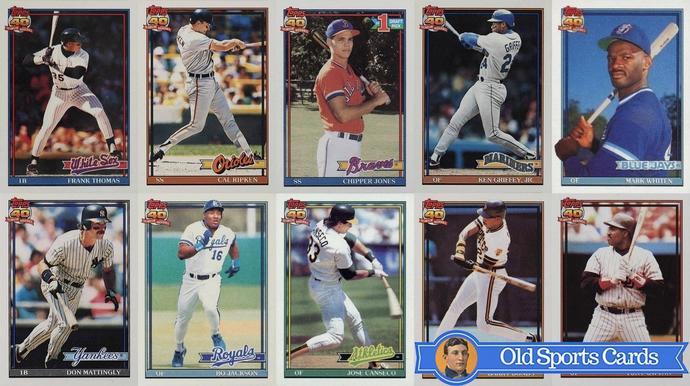 I was well into my prime childhood collecting days when the 1991 Topps baseball cards were released.

And I was incredibly excited when these cards were released because of a special they were offering...

Because of their 40th anniversary of producing baseball cards, Topps randomly inserted a copy of every card they ever made into packs to help build hype.

That led collectors everywhere to "chase the Mick" in hopes of landing one of the most coveted cards of all time: the 1952 Topps Mickey Mantle.

I was so pumped up and dreamed of pulling a vintage Mickey Mantle or any vintage star for that matter.

Although, I never pulled a single one of any of those randomly inserted cards, I always loved this set.

As you read through this list, please keep in mind that most cards in this set have little to no value these days.

Like the 1991 Bowman, Donruss, Fleer, Leaf, Score, Stadium Club and Upper Deck sets, far too many of them were printed and the market is over-saturated with them.

Or, they'd need to be one of the rarer Desert Shield versions...

Not to be confused with Topps' set of Desert Storm cards which featured military subject matter, the Desert Shield baseball cards were sent to soldiers who were serving in the Persian Gulf War during that time.

You can easily distinguish them from the base cards by the Desert Shield logo on the front of the cards. 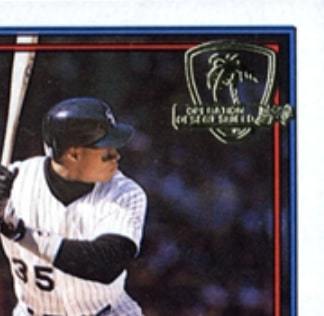 There were only around 6,500 of the Desert Shield versions produced for each player making them very limited and on top of that, you can imagine how few survived war-time conditions in top condition.

Now that we got that out of the way, let's take a look at the top ten most valuable 1991 Topps baseball cards:

This set was notorious for its numerous variations.

And the rarest of them all is the Mark Whiten card where his hand extends over the border of the card.

Other cards in the set also show hats, bats or body parts extended over the border as well but for some reason Topps decided to correct this on Whiten's card.

And because they corrected it, the limited number of Whiten cards where his hand is over the border instantly became a rarity and have shot up in value as a result.

Whiten played 11 years in the Big Leagues but was never a star.

This is just another case of where the value of a card can be boosted by a simple variation. 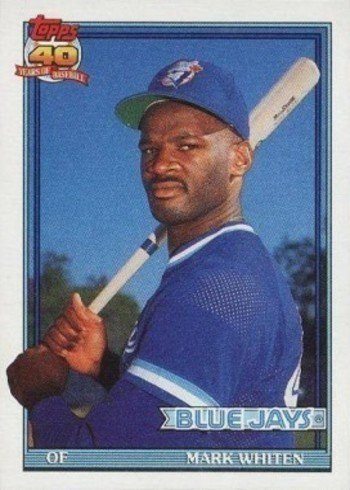 Speaking of superstars of the 1990's, next on our list is Ken Griffey Jr.

When I watched Griffey playing during the 1990's, it almost seemed a certainty he would one day be the all-time leader in home runs.

With that sweet swing of his, he seemed to effortlessly crush home runs left and right.

As far as athletes go, only Michael Jordan seemed to be more popular than Griffey Jr. back then and everybody wanted his cards.

Although his career was limited by injuries, he still put up monster numbers and was an easy Hall of Fame inductee. 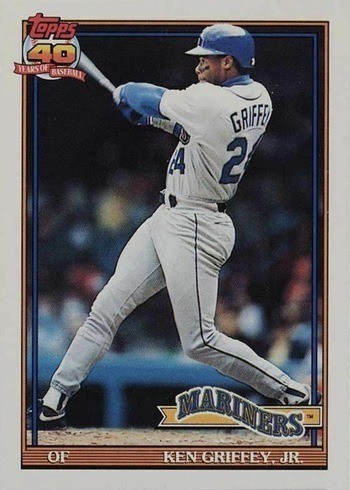 It may not be quite as valuable as the Mark Whiten variation or Griffey's base card but the Chipper Jones rookie card is easily the face of the entire set.

One of the most important rookie cards of the 1990's, this card is routinely in high demand.

Chipper Jones was a flat out superstar during the 1990's and fans adored him.

And can you believe that the Desert Shield version of this card can sell for thousands of dollars?

It may be shocking but it's true...only 31 examples of this card have been graded in PSA 10 condition as of this writing so collectors are willing to pay up big-time to own one. 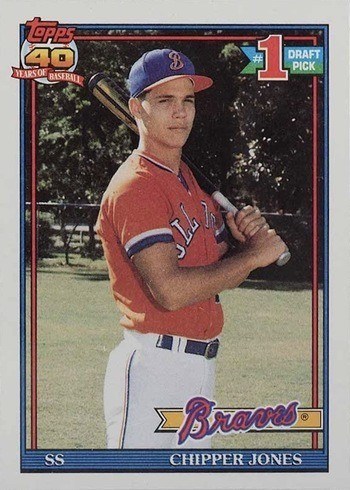 Well past his prime but still pitching at a high level in 1991, it was anyone's guess at how long his career would eventually last.

Remember, he was pitching in his fourth decade in 1991 which speaks to his longevity on the mound.

I always loved how Topps displayed Ryan on this card.

The horizontal layout was perfect in framing Ryan in the final moments of delivering one of his signature heaters. 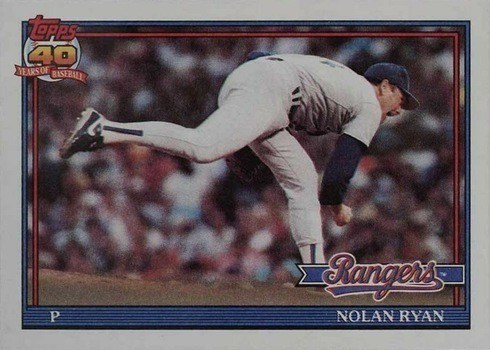 Topps did a great job with its All-Star card design for its 1991 set.

The "All Star" callout at the top with the starry sky in the background adds a very nice design touch to this card.

And the fact that Griffey Jr. appears on this list twice goes back to what I was saying earlier: he was one of the most popular athletes in the world at the time and collectors wanted any card on which he appeared.

I'd like to imagine him having just blasted one of his towering home runs by the looks of him in this image... 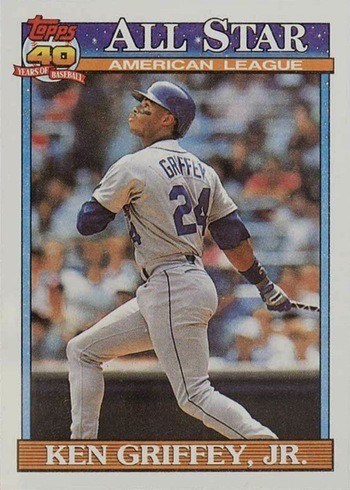 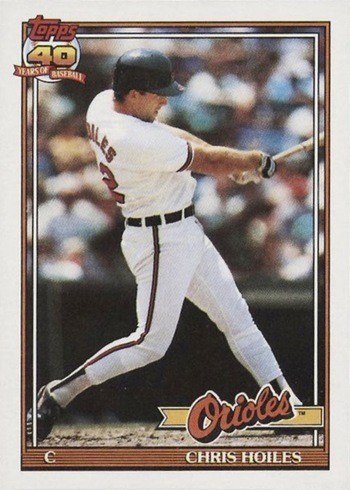 Don Mattingly was another one of those players who was on top of every collector's want list back in the late 1980's and early 1990's.

His production during the 1980's playing for the sport's most popular team seemed to put Mattingly on an easy trajectory towards a future Hall of Fame induction.

However, injuries plagued him as well and his production dropped off drastically in the 1990's.

I remember he seemed to hit and run with a distinct style and grace and you can see that coming to life in this great image of him heading towards first base. 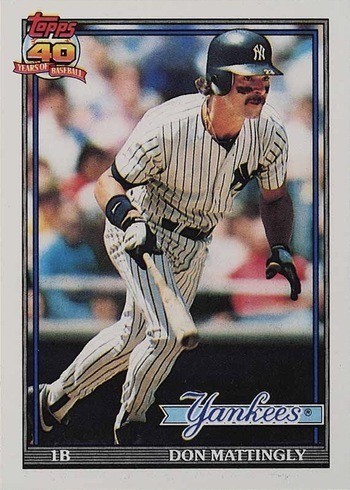 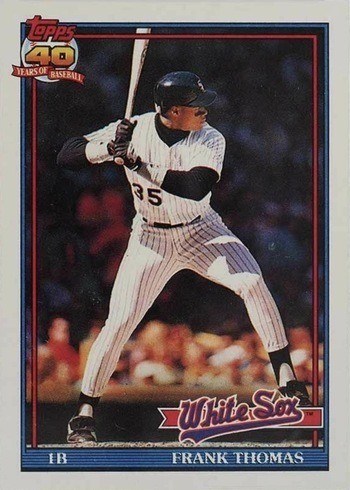 Nolan Ryan's "1990 Record Breaker" card is also high up on the list of cards from this set.

So what was the record he broke?

On the back of the card, Topps paid tribute to Nolan Ryan becoming the oldest pitcher to throw a no-hitter, a feat previously held by none other than the legendary Cy Young.

The funny thing was, he would waste almost no time breaking his own record when he threw his seventh and final no-hitter against Toronto on May 1, 1991. 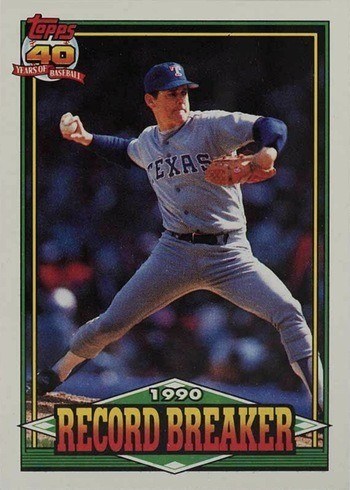 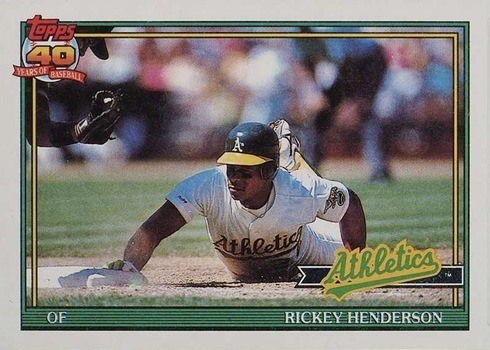 Ozzie Smith was an absolute master with his defensive wizardry.

He had incredible range and could get rid of the ball with lighting speed making him one of the best defensive shortstops the game has ever seen.

He also did backflips and other acrobatics on the field which always amazed me as a young kid.

Ozzie may be last on this list but he is definitely not least. 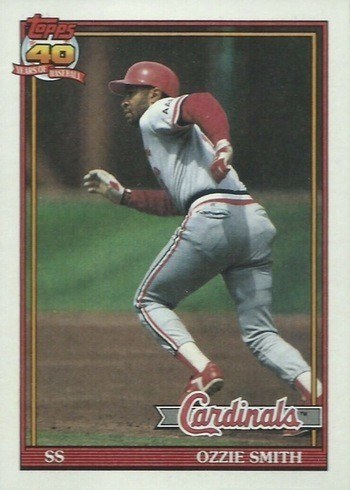 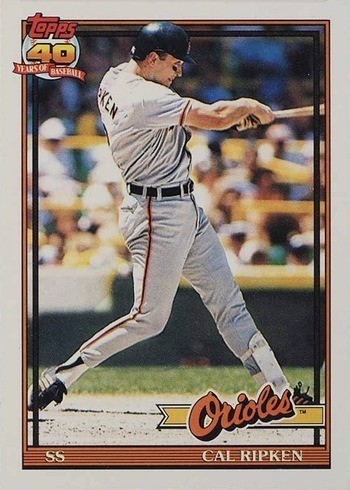 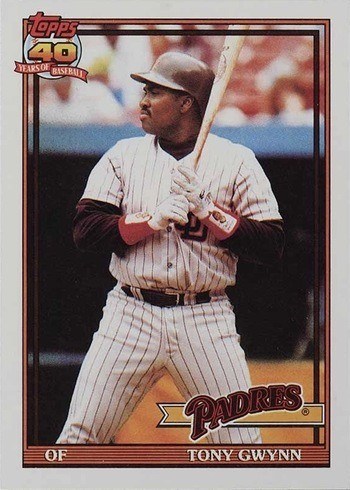 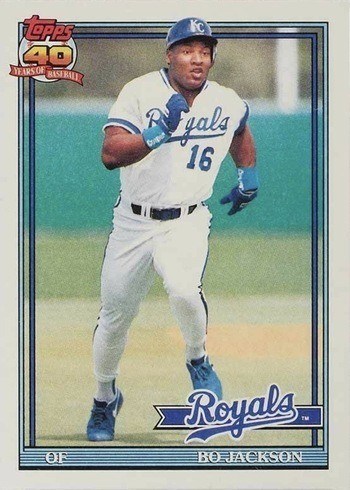 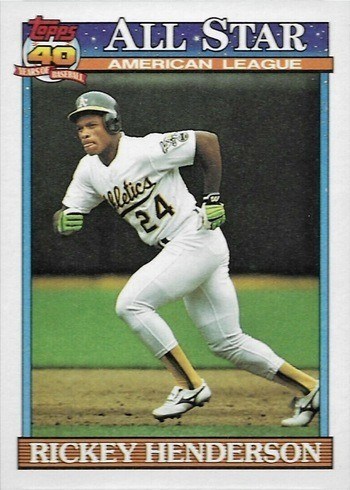 Cal Ripken Jr. also has a "Record Breaker" card in this set which acknowledges his achievement of setting the record for most consecutive games by a shortstop without an error at 95 games in a row.

Ripken's streak has since been broken multiple times.

Anyway, Ripken Jr. will always be known for that "other streak", the one in which he played in 2,632 consecutive games. 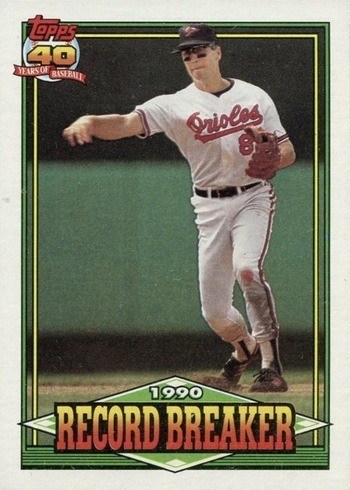 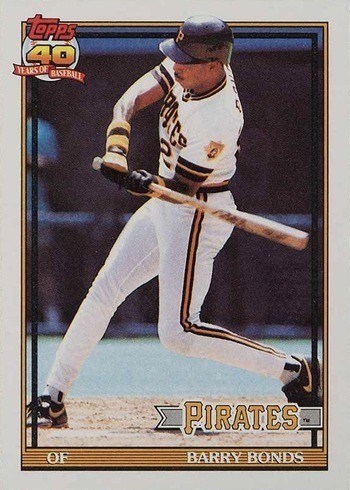 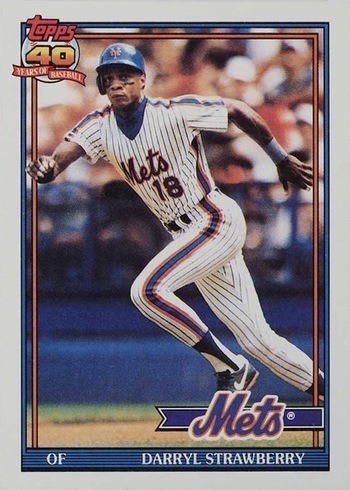 Mark McGwire was one of the game's hottest players in the early '90s because of his constant display of amazing power.

That slugging percentage is what actually gives this card much of its value.

Originally, Topps listed his slugging percentage for the 1987 as 618 (missing the decimal point) on the back of the card.

The error was corrected and most versions of this card are seen with the .618 slugging percentage instead.

Those "618" error cards are much more rare and valuable than the other. 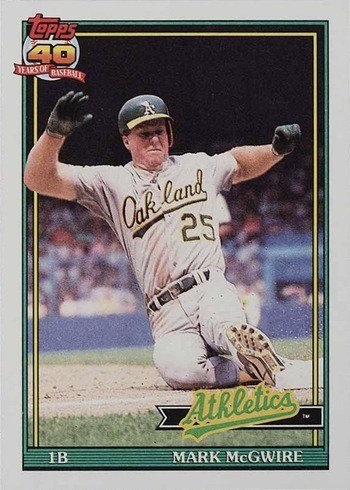 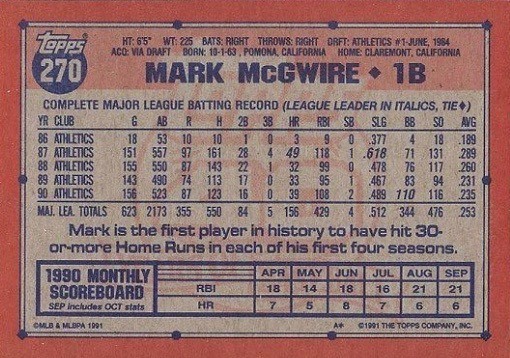 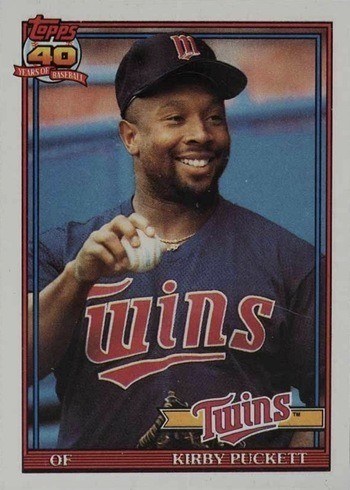 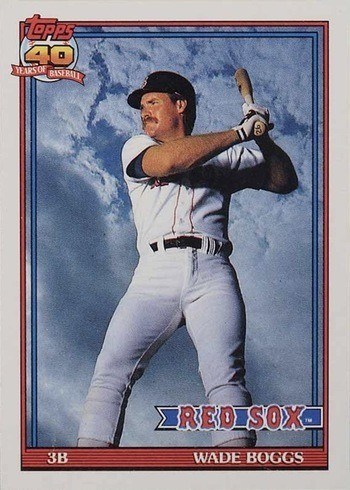 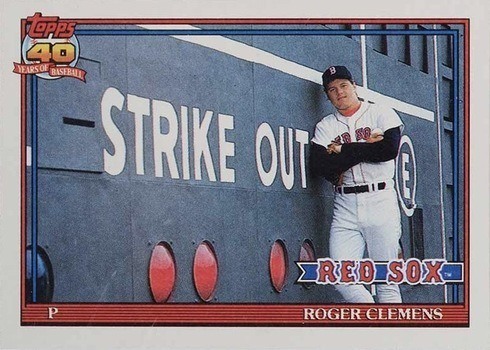 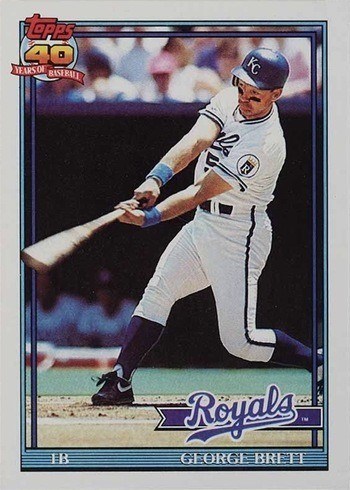 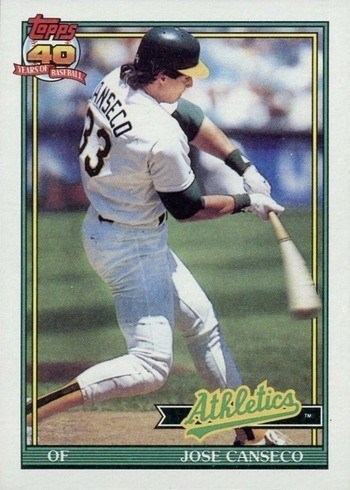 So there you have it, the ten most valuable 1991 Topps cards in both their base and Desert Shield forms.

Keep in mind, most cards from this set have no value--there were millions of each card printed. 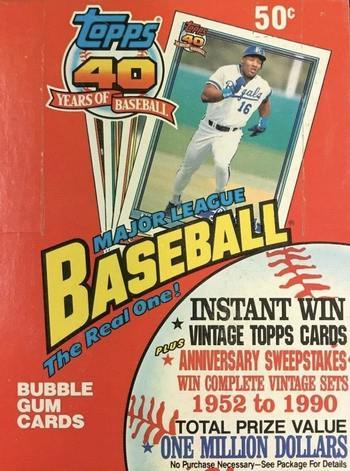 This set was a monster and contained a 792 card checklist in total and that is not counting the enormous amount of errors and variations, some of which are still being discovered today.

Sadly, this was the last set in which Topps inserted gum into wax packs.

They may not have much value today but this was easily one of my favorite sets growing up during that time period.