Some sets in this hobby leave a mark for their design alone and 1990 Topps football cards would certainly qualify as one of them.

With its multi-colored borders, football graphic in the lower-left, and green and white gridiron notches on the top and bottom borders, this set is instantly recognizable.

However, the market for football cards was certainly crowded in 1990 as Fleer, Pro Set and Score were also vying for a piece of the market.

That competition led to overproduction that has greatly diminished the values of many of the cards of that era but in high grade, some can still have value.

And in this guide, I'll run through the 12 most valuable 1990 Topps football cards.

Technically part of the 1990 Topps Traded set, I didn't feel quite right about leaving the rookie card of the game's all-time leading rusher off the list so here it is.

Emmitt Smith wasted no time cementing his legacy as an NFL legend as he'd finish the 1990 season with 937 rushing yards and 11 rushing touchdowns.

Amazingly, it was the last time he failed to eclipse the 1,000 rushing yard mark until 2002 when he just barely missed with 975 yards.

One of my favorite oddball statistics about Smith is that he rushed for exactly 937 in both his first and last seasons in the NFL.

This card is one of multiple sought after Emmitt Smith rookie cards. Coming into the 1990 season, Joe Montana and the 49ers were looking to win their third straight Super Bowl.

They were firing on all cylinders and nobody seemed to be able to stop them.

Further proving just how dominant those 49ers teams were was their record 18-game road winning streak that spanned across the 1988 to 1990 seasons.

Winning any single game on the road in the NFL is challenging enough, let alone 18 in a row.

Collectors throughout the hobby still love "Joe Cool" and this card can fetch around $40 in top grade. 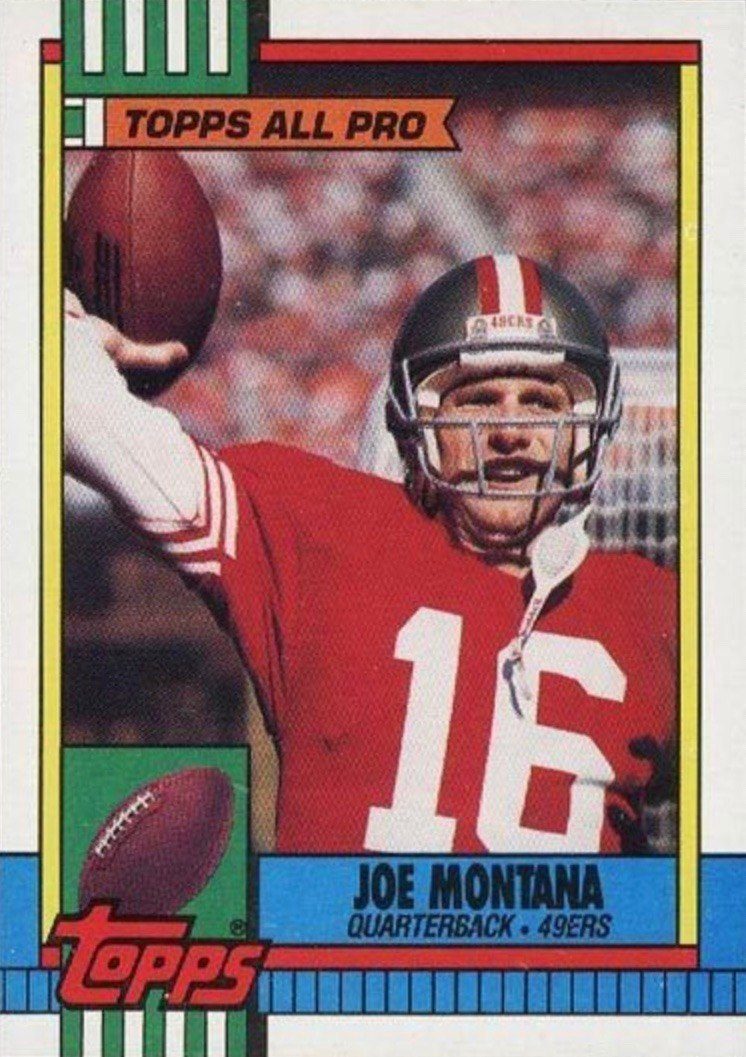 Speaking of unstoppable, Barry Sanders goes down in history as arguably the greatest running back of all-time.

Sure, he doesn't have the career records to prove it but anyone who saw him play knows how incredibly elusive he was.

Over his 10-year career he was a Pro Bowler each season and racked up 15,269 rushing yards, the most by any NFL player over a 10-year stretch.

Prior to the 1999 season, Sanders unexpectedly retired and left football fans everywhere wondering just how many yards he could've ended up with had he kept running. One of the greatest linebackers of all-time, Seau was the type of player who offenses had to plan their entire day around.

If not, he'd make you pay as his speed, power, and intelligence were just too much to handle.

To prove how good he was, Seau would finish his storied career as a 12-time Pro Bowler and 6-time All-Pro. While the 1990 season was Jackson's one and only Pro Bowl year, it was also sadly his last in the NFL.

During a game against the Bengals in January 1991, Bo dislocated his hip and was forced to retire from football.

While he was able to continue playing Major League baseball, he was never able to perform at the same high level again.

Regardless, Jackson is still loved throughout the hobby and collectors are always looking for his cards in high grade. One of the most feared defensive linemen of his day, Reggie White would earn his 5th straight trip to the Pro Bowl for his efforts in the 1990 season.

He was a one-man wrecking crew that wreaked havoc on opposing offensive lines and would finish his Hall of Fame career with 198 sacks when all was said and done.

White was also known as a man of high character which led to him being even more popular among fans and collectors.

In high grade, this card can be worth around $20. During Super Bowl XXIV, the San Francisco 49ers annihilated the Denver Broncos 55-10 in one of the most lopsided victories of all-time.

Along the way, Joe Montana turned in one of the finest performances by a quarterback as he set a record for most passing touchdowns in a game with 5.

Topps commemorated the event quite nicely with this "1989 Record Breaker" card. Speaking of that record-setting night against the Broncos in Super Bowl XXIV, 3 of those 5 touchdown passes that Montana threw were to none other than Jerry Rice.

It was one of many performances that solidified his legacy as the greatest receiver, if not the greatest player in general, in NFL history.

The 1990 season was one of his finest as it was the only year in which he led the league in receptions, receiving yard and receiving touchdowns.

Rice left a legacy of consistency, professionalism and dominance that made him a fan favorite and one of the most highly-collected players in the hobby. While Troy Aikman made his rookie card debut with Topps in their 1989 Topps Traded set, the company awarded the legendary quarterback with a "Super Rookie" card in their 1990 set.

Considering Aikman was a 6-time Pro Bowler and 3-time Super Bowl champ, it's surprising that he threw for more than 20 touchdowns in a season only once in his career.

I guess when you have some Emmitt Smith running the ball and some incredible defenses to support you on the other side, you don't have to put up gaudy passing stats to be considered an all-time great. Often credited with transforming the quarterback position into what it is today, Dan Marino was the first quarterback to ever throw for more than 5,000 yards and toss more than 40 touchdowns in a season.

He also goes down in history as arguably the greatest NFL player who never won a Super Bowl.

Year after year, Marino would lead some electrifying Dolphins offenses into the playoffs only to be eliminated at one stage or another.

His one chance at a Super Bowl came early in only his second year in the NFL but the Dolphins were stopped 380-16 by a dominant 49ers team led by Joe Montana. And it wasn't for a lack of Super Bowl appearances as he'd already been to the big game three times heading into the 1990 season.

The Giants stopped him in Super Bowl XXI.

And, then the 49ers crushed Elway's hopes yet again in Super Bowl XXIV.

You gotta wonder how Elway could keep coming back for more but to his credit, that's exactly what he did.

But, just as his career was wrapping up in the late 1990s, he'd win not 1 but 2 rings as he rode off into the sunset as an NFL legend. Last on our list is a guy whose name is right up there with Jerry Rice when discussing who deserves to be called the greatest NFL player in history.

LT brought a combination of speed and power to the linebacker position that may never be seen again.

And it's not like the guy transformed into a dominant defender over his career as he was named NFL Defensive Player of the Year right out of the gate for his rookie campaign in 1981.

To call LT intimidating would be an understatement as he brought a level of intensity and relentlessness to his game that struck fear deep into the hearts of his opponents. While they may not have much value these days, the 1990 Topps football set was loaded with Hall of Famers and gives us a great dose of nostalgia.

Within the 528-card checklist, there were also several different subsets, including:

One interesting thing about this set is that the backs of many of the cards contain the verbiage "Topps Football Player cards are not manufactured, sponsored, or authorized by any team or league".

For those collectors on the lookout for great Hall of Famers of the era or just a fun set to complete, this set may be for you.