I have many fond memories of collecting 1990 Score football cards during my younger days:

And don’t forget all those trivia cards that were inserted into packs to help build your football knowledge.

Overall, I really liked collecting this set as a kid.

And while many cards in this set are sadly not worth anything these days, there are some that still do stick out in terms of value.

In this list, I take a look at the top ten most valuable today.

Note: ​​​​To be clear, most of the cards from this set do not have any value these days as far too many of them were printed and the market is over-saturated with them.

That said, in order for the cards on this list to be worth much, they'll have to be graded by PSA to be in perfect, gem mint condition.

Emmitt Smith's most recognizable rookie card was technically part of the "Score Supplemental" factory set that featured rookies and players who had been traded.

The card features a great action shot of Smith, the NFL's all-time leading rusher, looking to break through the New York Giants defense.

However, he may not have gotten too far on that particular run as it looks like that's Lawrence Taylor on the right bearing down on him...

This is one of the better-looking cards on this list as the blue borders and overall color scheme work quite nicely with the Dallas Cowboys team colors.

Easily the most coveted of any of the cards on this list, this card can sell for just under $300 in top grade. 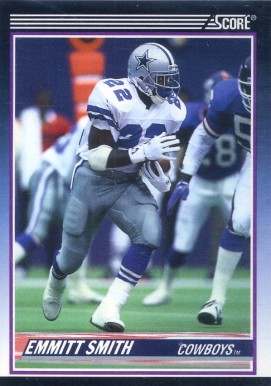 Joe Montana was one of the greatest quarterbacks who ever played and arguably the biggest star of the 1980s and early 1990s.

When all was said and done, he'd end up winning 4 Super Bowls, 2 MVP awards and was named to 8 Pro Bowls over his legendary career.

As a tribute to his stardom, Score awarded Montana by making him card #1 in their 1990 set.

They also captured him in action quite nicely with this image of him of unleashing one of his pinpoint passes.

Those who collect football cards from that era are always on the lookout for high grade Montana cards and this one is no exception. 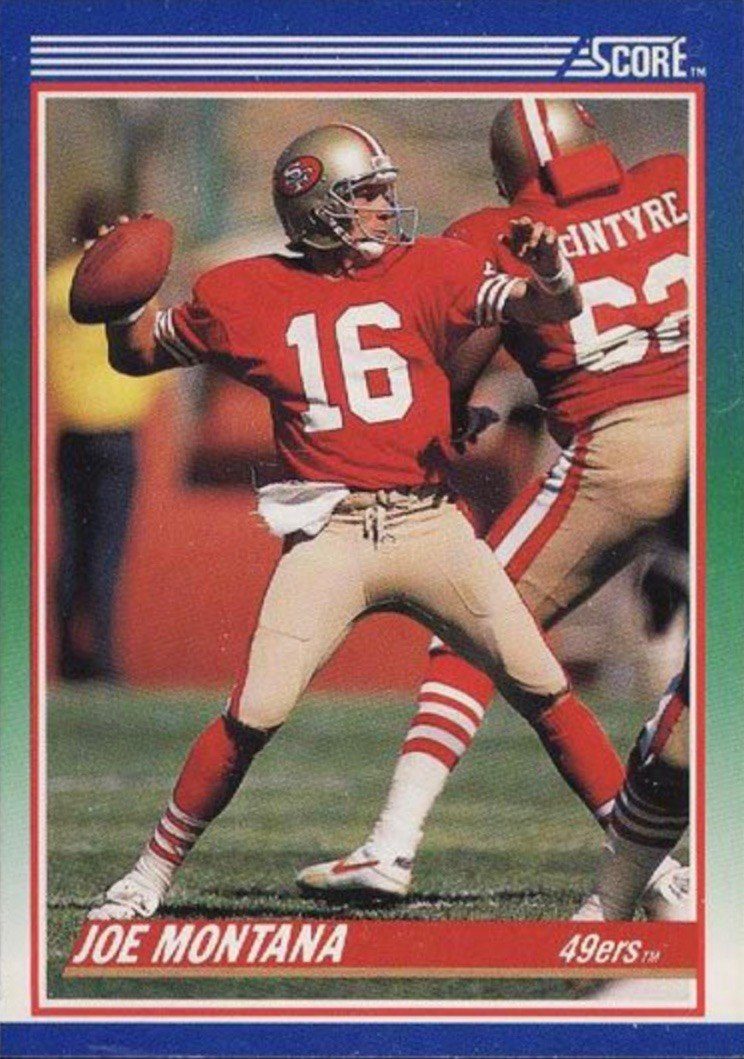 Known for his leadership and extreme passion for the game, Junior Seau was one of the greatest linebackers who ever stepped onto the gridiron.

The 12-time Pro Bowler was extremely quick, aggressive, and his instinctive play demanded that blockers account for him at all times.

He retired from the game after the 2009 season but sadly took his own life a few years later in 2012.

It was later found that Seau suffered from CTE, a disease believed to be caused by head trauma that can lead to depression, rage, and dementia.

Seau was inducted into the Hall of Fame in 2015 and today, his rookie card is one of the keys to this set. If you ever saw Barry Sanders play, you know he was incredibly fast and could stop and cut on a dime leaving defenders grabbing at nothing but air.

Had he not retired out of frustration during his prime, it's quite possible that he'd have wound up as the NFL's all-time leading rusher instead of Emmitt Smith.

In fact, his career 99.8 yards per game ranks second all-time to Jim Brown's 104.3 so that should speak for itself.

Sanders eclipsed the 1,300 rushing yard mark an incredible 9 out of the 10 seasons he played...and the only year he didn't was because he played in just 11 games but still managed to rush for 1,115 yards.

He made his rookie card debut in the 1989 Score set but collectors still look for this second-year card in high grade as well. In most any sport, the greatest player to ever play his or her position is almost always debatable.

However, Jerry Rice is one of those rare cases where there isn't much of a debate as he's widely considered the greatest wide receiver to ever play.

Some would even say he's the greatest football player in general who ever played...

Rice and Montana went together like peanut butter and jelly to form one of the most lethal offensive duos in the history of the game.

Along with his amazing speed and hands, Rice was notable for his route-running ability which is on full display on this card. Heading into the 1990 season, Bo Jackson was arguably the hottest name in sports.

His ability to play both professional baseball and football was well-documented, Nike had an advertising campaign behind him, kids were using him to dominate their friends in Nintendo's "Tecmo Bowl", videogame...he was everywhere.

Those kids who grew up idolizing Jackson are now adults full of nostalgia and they still look for his cards in high grade.

Although Jackson would be named a Pro Bowler for the 1990 season, his football career was cut short because of an injury he suffered against the Bengals (oddly the same opposing team on this card) in 1991.

He remains the only person to ever be selected as both an NFL Pro Bowler and MLB All-Star. Another two-sport star, Deion Sanders was effective on the baseball field but where he really shined was on the football field.

As evidence, he was an 8-time Pro Bowler, 6-time All Pro, and 2-time Super Bowl champ on the gridiron while he never earned any special selections or awards as a baseball player.

He was so good at his football craft that he goes down in history as arguably the greatest cornerback who ever played.

And he'll often be known for his flashy style of play, larger-than-life personality, and is largely responsible for helping redefine free agency for superstars.

Pictured on this card as an Atlanta Falcon where he was named to 3 Pro Bowl teams, he's largely remembered for his days with the Dallas Cowboys. Widely regarded as the greatest defender to ever play in the NFL, Lawrence Taylor burst onto the scene in 1981 and was an absolute one-man wrecking crew until he retired after the 1993 season.

Opposing offenses worried constantly about how to block him because of his incredible speed and power.

His 1986 season will always stand out, in particular, as he racked up 20.5 sacks, helped the Giants win the the Super Bowl, and earned MVP honors.

Since then, no other defender has ever been named MVP.

I've always loved this card as it demonstrates perfectly just how relentless he was as he'd stop at nothing to shut down the opposing team.

Marino was one of my favorite players to watch as a kid as he redefined the quarterback position with his electric performances.

He set the football world on fire during the 1984 season when he broke six single-season records as a quarterback, among them being the most passing yards (5,084) and most touchdown passes (48).

Those have since been broken but remember, Marino was putting up those gaudy numbers during an era when the passing game was much more difficult than it is today.

Since his retirement after the 1999 season, Miami hasn't had a quarterback who comes anywhere close to how good Marino was. Named to the NFL's All-Decade Team of the 1990s, Cortez Kennedy made his debut with the Seahawks in 1990 and stayed there until his retirement after the 2000 season.

Kennedy was a large interior lineman who continued to rank at or near the top in tackles year after year despite being regularly double-teamed and sometimes triple-teamed.

He was an 8-time Pro Bowler and 5-time All Pro who was known for his consistency and dedication to the sport and his teammates.

His rookie card pictures him still in his University of Miami uniform but it was with the Seattle Seahawks where he carved out his strong legacy and Hall of Fame career. So, as you can see, the ten most valuable 1990 Score cards include a strong list of big name stars and Hall of Famers of that memorable era.

But, again, to be worth much they'll need to be professionally graded in gem mint condition.

Regardless of value, though, these cards bring plenty of nostalgia to collectors who grew up collecting them.

In all, there were 660 base cards to collect, split evenly into two 330-card series as well as the additional 110 cards included in the 1990 Score Supplemental set.

And there were also many subsets as well, including:

There was a lot to like about these cards and for those of us who grew up collecting these as kids, they'll always have a huge nostalgic factor to them.