Love them or hate them, 1990 Pro Set football cards will always be known for the incredible amount of errors and variations scattered throughout the set.

To achieve its vision of being a "living set," the company was constantly updating, revising, removing, and replacing various cards.

While ambitious in spirt, that body of work ultimately resulted in one of the most notoriously variation-laden sets in hobby history.

And there are likely to be some undiscovered variations still lurking out there that will keep master set collectors on their toes for years to come.

In this guide, I'll run through the 15 most valuable that I could find.

Created as a spoof of sorts, this promo card features an old photo of "Pro Set Prospect," Steve Young, who was then Vice President of Pro Set.

Because these were never circulated in packs, very few were printed in the first place and it isn't known how many survive.

The true #666 card in the set belongs to Walter Stanley, who played wide receiver for Green Bay, Detroit, Washington and New England over his seven-year career in the NFL.

Considered the holy grail of all Pro Set cards, this impossible card rarely surfaces so it's difficult to estimate its value.

To the right buyer, it wouldn't be surprising if this card sold for thousands of dollars in any condition. After Dickerson refused to let other card manufacturers use his name and likeness, the NFLPA asked Pro Set to remove it from its set production and distribution.

It is believed that somewhere in the neighborhood of forty Eric Dickerson cards made their way into packs before the shutdown.

The company limited the print run of the Denny replacement card to just a few sheets and given out to NFL employees and friends as gifts.

Who knows how many survived?

Estimating the value of this card is tough, as you hardly ever see them come up for sale or auction, but I'd say they're not cheap.

A comical writeup accompanies a large image of Giants "head coach" Denny in a Chicago Bears shirt on the card's reverse. High-grade examples are hard to find as the surfaces are susceptible to showing scratches and other damage. A former All-American at the University of Miami and one-time Pro Bowler with the New England Patriots, Fred Marion was a solid safety throughout his playing career.

Solid enough that you would think he intercepted the pass in this photograph, as the ball is all but firmly between his two hands.

However, somehow he managed to drop this ball as the stat sheet for the game in which this photo was snapped, a 37-20 loss to the San Francisco 49ers, show neither Joe Montana nor Steve Young with any interceptions that day.

But, neither Fred Marion nor that botched pick has anything to do with the value of this card and it has everything to do with a stumbling John Taylor falling to the ground behind him instead.

If you look closely, Taylor's belt is hanging out in such a way to give the appearance of a certain bodily appendage hanging out instead.

Pro Set eventually caught the issue and fixed it with a bit of airbrush magic. During his time with the Washington Redskins from 1981 to 1989, Dexter Manley enjoyed quite a bit of success, picking up two Super Bowl rings and one Pro Bowl nomination along the way.

However, he eventually became entangled with cocaine use and after failing his third drug test, the NFL suspended him in 1989.

Unfortunately, his struggles with cocaine continued and he retired in 1991 after failing his fourth drug test.

On the reverse side of his card, Pro Set first spoke of Manley's substance abuse violation but later replaced it with a cleaner (no pun intended), more kid-friendly version with no mention of drug abuse.

The substance abuse variation, being rarer, can be worth quite a bit in high grade. No Mention of Substance Abuse Arguably the greatest running back of all-time, Barry Sanders remains extremely popular among football card collectors, and this card is no exception.

His career lasted just ten years, but he made each season count as he juked and slashed his way to 1,000+ rushing yards and a Pro Bowl appearance in each one of them.

In fact, he never rushed for fewer than 1,115 yards, and that came during an injury-shortened season in 1993 in which he only played eleven games.

The guy was unstoppable.

For his performance during his rookie campaign, Sanders was named 1989 Offensive Rookie of the Year Award.

To commemorate the honor, Pro Set created this promo card given to dealers and industry insiders at a trade show in Hawaii. The legendary Bo Jackson appears on two different 1990 Pro Set cards: one celebrating him and the AFC Champion Raiders headed to Super Bowl XXV and the other classic, more recognizable black-bordered base card.

There was just one problem with the Super Bowl XXV card: the Raiders never played in Super Bowl XXV because the Buffalo Bills defeated them during the AFC Championship game.

Neither team appeared in Super Bowl XXV, however, as the New York Giants went on to defeat the Bills 20-19 after Scott Norwood's famous last-second field goal sailed wide right.

Never officially released, some of the "Super Bowl XXV" cards did make it into collectors while very few have received a PSA 10 grade. The game's all-time leading rusher, Emmitt Smith is pictured picking up some of those 18,355 career rushing yards against division rival Washington on his Pro Set rookie card.

He performed well both times against Washington that year, rushing for 63 yards and a score in Week 3 (shown on this card) and later rumbling for 132 yards and two scores on Thanksgiving Day in Week 12.

While it may not be his most expensive rookie, I've long thought it had the best eye appeal among the group due to the bright, full image and overall design.

The Cowboys selected Smith in the first round of the 1990 draft and he was a steady performer for them until he departed after the 2002 season.

He wasted no time building his Hall of Fame career as he rushed for 937 yards and scored 11 touchdowns during his rookie campaign.

Another interesting Emmitt Smith statistic: he rushed for exactly 937 yards during his final season with the Cardinals in 2004. To commemorate Smith winning Offensive Rookie of the Year honors, Pro Set printed a second Smith card with a horizontal layout, showing him busting through the Jets defense. While the 1989 Pro Set Santa Claus was sent to dealers as a promo card, the 1990 version was a short print distributed inside Series 2 packs that sent collectors into a frenzy trying to chase it.

There are several fun quirks to observe on this card: Many believe SuperPro to be among the worst comic books ever produced.

Marvel Comics published the series in 1991, which centers around Phil Grayfield, a former All-American linebacker turned sports interviewer, who obtains an indestructible football uniform that he wears to fight crime.

Or, as the cover art of issue #1 states, "He went from sacking quarterbacks to tackling crime."

It wasn't they, though, who brought down SuperPro after just twelve issues, it was the overall botched attempt at trying to crossover football fans and comic book collectors.

To boost interest in the upcoming comic book release, Pro Set gave SuperPro his own card, which can still fetch a decent price in top condition. As mentioned earlier, Dickerson's card was ultimately pulled from production due to contract disputes, but not before some found their way into packs.

While they rarely come up for sale, they certainly spark collector interest when they do as it's one of the more elusive 1990 Pro Set cards in the hobby.

Dickerson exploded onto the NFL scene with the Los Angeles Rams in 1983 when he led the league with 1,808 rushing yards and scored 18 rushing touchdowns to earn Offensive Rookie of the Year honors.

For an encore, he set the NFL record for most rushing yards in a season as he rumbled his way to an incredible 2,105 yards on the ground. These test cards sought to predict the player taken with the number one pick of the draft and where he might go given several different scenarios.

McCants' only card showed him as a member of the Falcons while George was shown potentially landing with the Falcons, Colts, or Patriots.

After the Falcons traded the first pick to the Colts, Jeff George's fate was sealed as Indianapolis drafted him with high hopes of being their franchise quarterback for years to come.

McCants wound up in Tampa as the number four pick overall.

Neither players' career lived up to expectations, but George's card is worth more in top grade.

There is also a gold-border version of George's card that is tougher to find and likely pricier than these three. 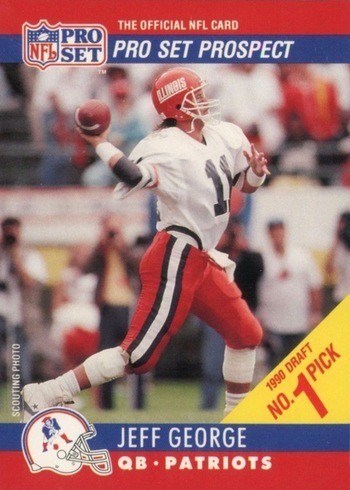 As part of that trade to secure Jeff George with the first pick of the 1990 NFL Draft, Indianapolis sent a young Andre Rison to Atlanta.

Because of the living set concept of 1990 Pro Set, the company re-issued his card with a trade banner in the lower-right corner.

Some of those also included a special message from Ludwell Denny on the reverse side.

During his time in Atlanta, Rison was a stud, making the Pro Bowl four straight years and leading the league in receiving touchdowns in 1993 with 15 grabs. One of the greatest linebackers of all-time, Seau was a 12-time Pro Bowler and 6-time All-Pro who terrified opposing offenses over his 20-year career in the NFL.

His best days were with the San Diego Chargers, who took him with the fifth pick of the 1990 NFL Draft.

Known for his high energy and passion for the game, teammates dubbed him "The Tazmanian Devil" for his resemblance of the famous Warner Brothers cartoon character.

Seau's finest season came in 1994-1995 when he put up an incredible line of 155 combined tackles (124 solo), 5.5 sacks and 3 fumble recoveries while leading the Chargers to Super Bowl XXIX. What may seem like a normal set on the surface, this one is anything but that.

While loaded with stars and Hall of Famers as well as various inserts, I'm sure the entire master set is exhausting to attempt to piece together given all the variations.

Because of all the variations, you'll notice that some of the game's biggest names of the day like Joe Montana, Jerry Rice, Dan Marino, John Elway, and Lawrence Taylor didn't even make it into the top fifteen most valuable.

That says a lot about this set.

For those collectors on the lookout for great Hall of Famers of the era or just a fun set to complete, I would advise putting together the basic checklist.

Otherwise, prepare for enormous investment in time and effort if you're going for the master set.