For years during the 1980s, there were hardly any basketball cards to collect whatsoever…

Topps bowed out of the hobby after 1981, Star released a few sets later on and Fleer didn’t join the market until 1986.

However, by 1990, the basketball card hobby was clearly back on the map as kids everywhere were ripping through packs in hopes of pulling a Michael Jordan.

What this set may lack in terms of overall value, it certainly makes up in nostalgia.

And in this guide, we look at the 11 most valuable the set has to offer.

Like the 1990 Hoops and Skybox sets, there were just so many of these cards printed.

It should come as no surprise that Michael Jordan's 1990 Fleer basketball card comes in at the top spot as his cards are always in high demand with collectors.

And since the debut of "The Last Dance" documentary, all of his cards have soared in value.

The 1990 -1991 season was as remarkable as any for Jordan individually as he'd lead the league in scoring, be named an All-Star, be selected to the All-NBA and All-Defensive teams as well as being named league MVP.

He and the Bulls also dropped the Los Angeles Lakers 4-1 to pick up his first NBA title after struggling for years to get past the Detroit Pistons and into the finals.

I've always loved the look and feel of this card as it captures Jordan up close doing what he did best: throwing down a slam dunk on a breakaway drive.

Scottie Pippen in the background also adds a nice touch. They were the NBA's Batman and Robin and would win 6 NBA championships together...and they very well could have won more had their winning streak not been sidetracked by Jordan's retirement.

The Bulls logo, red-colored key nameplate at the bottom and Pippen's bright red jersey really make this card pop to give it strong eye appeal.

Pippen's cards have also taken off since "The Last Dance" documentary went on air. Known for his passing skills that weren't common at the center position, he turned in several solid seasons, most notably with the Lakers and Kings.

Somewhat surprisingly, he was elected to only one All-Star game over his career but I guess it makes sense considering Hakeem Olajuwon and David Robinson routinely represented the Western Conference at center during that time.

One of the things that always sticks out in my memory was how Divac was able to play at such a high level while being a heavy cigarette smoker. In the early to mid 1990s, there were few players as exciting to watch as Shawn Kemp.

I remember being amazed as a kid when I heard stories of him being able to grab a quarter off the top of the backboard.

The guy could absolutely jump through the roof and his vertical leaping ability is on full display on his 1990 Fleer card.

Kemp was a dominant power forward in the 1990s and his ability to score and rebound routinely wreaked havoc on opposing teams night in and night out. Unlike Kemp, Larry Bird wasn't known for his ability to throw down monster dunks but he was every bit as exciting to watch.

His tenacity and hustle were nearly unmatched.

As one of the fiercest competitors to ever play the game, Bird used his above-average shooting, passing and rebounding skills to help lead the Celtics to three NBA titles over his career.

There are other Larry Bird cards worth more than this one but I've always loved the action shot on this card of him shooting a jumper over his career rival, Magic Johnson. 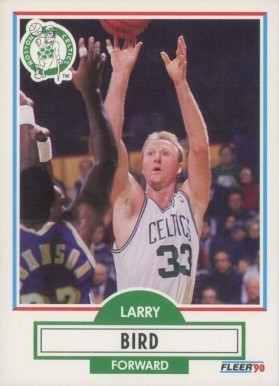 Speaking of Magic Johnson, Fleer did a fantastic job of capturing him in action on this card not so much because of what is going on but what you could imagine might be underway.

I'd like to think he's in the middle of going across the lane for one of his signature "baby sky hook" shots that were nearly impossible to defend.

Of anyone besides Jordan on this list, Magic Johnson was probably the most exciting as you never knew what his next move was going to be.

His incredible floor vision, court awareness and overall basketball wizardry allowed him to make some of the most thrilling plays.

He and Bird share a rookie card that has rightfully earned its place as one of the hobby's most expensive basketball cards of all-time. If there was one signature move that I remember kids trying to replicate on the basketball court in the early 1990s it was definitely Tim Hardaway's "killer crossover".

The lightning quick move allowed Hardaway to create just enough separation against opposing defenders to turn him into an elite scorer and passer.

It also paved the way for future NBA stars like Allen Iverson to implement similar moves into their offensive arsenals although Iverson and Hardaway don't necessarily see eye to eye on who did it better.

Regardless, Hardaway goes down in history as a lighting quick player who constantly attacked the bucket, something Fleer captured nicely on his rookie card. Barkley's 1990 Fleer issue was one of the few cards to picture him with any amount of hair whatsoever.

His personality is as big as his basketball legacy, for which he is known as being one of the greatest power forwards to ever set foot on the hardwood.

He possessed incredible shoot ability for a power forward but was also known as a big-time rebounder who could take the ball coast to coast.

The former MVP and 11-time All-Star was arguably one of the most deserving players who never did quite when an NBA title. The 1989 Hoops David Robinson rookie card was one of the hobby's most-coveted basketball cards during the early 90s.

And this second-year card was also hot at the time...

Because of his dominating play at Annapolis, there was so much hype surrounding the legendary big man upon entering the NBA.

And he definitely didn't disappoint...the 10-time All-Star, 2-time NBA champ and 1-time MVP easily goes down in history as one of the game's greatest centers.

This card perfectly captures Robinson throwing down one of his two-handed slams, almost making it look easy. If you were to make the argument that Hakeem Olajuwon were the greatest center to ever play in the NBA, you probably wouldn't get too much pushback.

While it's impossible to say for sure (as those arguments go), there is no question that Olajuwon was an unstoppable force on both sides of the ball.

If he wasn't reigning jumpers over you with his lanky frame and offensive quickness, he was pulling down rebound after rebound or blocking the ball on defense.

And he did so with finesse that was unheard of for guys his size...

I'll never forget how he got the best of Shaquille O'Neal during the 1995 NBA Finals although you could argue O'Neal wasn't quite yet in his prime. Last but not least on our list is Karl "The Mailman" Malone.

Like Barkley, Malone was a guy who was clearly good enough to be an NBA champion but sadly never won one.

That's what happens when Michael Jordan is playing in the league during your prime years.

Malone was an incredible power forward who was extremely effective on both offense and defense as he used his strong frame to his advantage night in and night out. As you can see, even the most valuable cards in this set don't pack a great deal of value these days.

Like many sports cards of this era, they were heavily produced in such large quantities that the market is still flooded with them.

Overall, the checklist contained 198 cards in total that, if nothing else, captured some of the greatest players of all-time with exciting imagery.

There were Fleer All-Star sticker card inserts that can be worth more than the base cards on this list assuming the sticker is still in tact and is graded in top condition.

In summary, if you're looking for a basketball card set with a lot of star power that you can acquire cheaply then this is one for you.