In many ways, the 1989 Hoops David Robinson rookie card was every bit as hot as the Upper Deck Ken Griffey Jr. rookie card of that same year…

Its legacy in the basketball card collecting community is forever cemented.

And in this guide, we’ll cover everything you need to know about them.

Unlike the Michael Jordan rookie card that's held up extremely well, ungraded examples of this card can be had extremely cheaply these days.

But if they're graded by a professional company to be in top condition they can still hold serious value:

So what makes this card so special?

David Robinson was a phenom, for sure, but that alone wasn't the sole reason for this card's importance.

The real reason is that this was the first time since the Pete Maravich and Calvin Murphy rookies in Topps 1970-71 set that a player was pictured during his rookie season.

And it was all due to a special set of circumstances having to do with Robinson's graduation from the Naval Academy at Annapolis in 1987.

Even though the Spurs drafted him that same year, he couldn't set foot on an NBA court until he fulfilled his commitment of two years of Naval service.

So, although he made his basketball card debut in 1989, "The Admiral" had already been a member of the Spurs for two years.

That's why Hoops wasn't breaking any rules when they put him on this card during his rookie campaign.

I always liked the design of the 1989 Hoops set that featured players within a design that resembled a key on the basketball court.

The color scheme was nice and simple, too.

A young Robinson is shown beaming with joy holding his new Spurs jersey after the franchise drafted him number one overall in the 1987 draft. 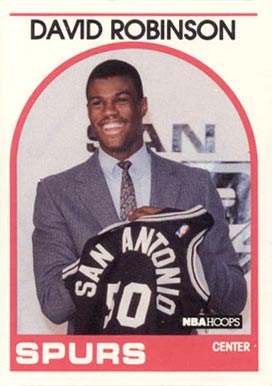 The back of the card shows a head shot of the young star along with his personal information at the top.

And in the center is a nice write-up on his accomplishments to date as well as mention of his promising future.

You see as well the explanation about Robinson having to wait two years to take the court in the NBA after fulfilling his commitment to the Navy.

It's a nice design but also noticeable is a large amount of blank space, something you didn't really see on cards of that era. Finding Them In Packs

The marketing budget that the company had also pumped up demand for this card a great deal.

Collectors were going so crazy to get their hands on one of Robinson's rookies at that time that they would search packs to find them before even opening them.

The material of these packs of Hoops cards was transparent enough that you could see whose card was on top.

And if Robinson's rookie wasn't sitting right there up front (like the one in the picture below) then you had no need to worry.

By simply knowing the collation of this set, you could estimate if Robinson's card was somewhere in the pack just based on whoever was on the front.

The novelty of owning a pack with a Robinson card showing on top also drives up the prices for these kinds of packs.

Professionally graded copies of packs like these can sell for hundreds of dollars if the pack itself is graded in top condition. David Robinson certainly lived up to the hype.

He was one of my favorite players to watch as a kid.

He wasted no time and broke onto the scene putting up 24.3 points per game, 12 rebounds per game, and 3.9 blocks per game his rookie year.

Seeing him going up against Patrick Ewing and Hakeem Olajuwon was always a treat.

And watching him dominate the 1992 Summer Olympic Games with the Dream Team was something I'll never forget.

The Hall of Famer would go on to record a list of amazing achievements that included but are not limited to:

He was inducted into the NBA Hall of Fame in 2009.