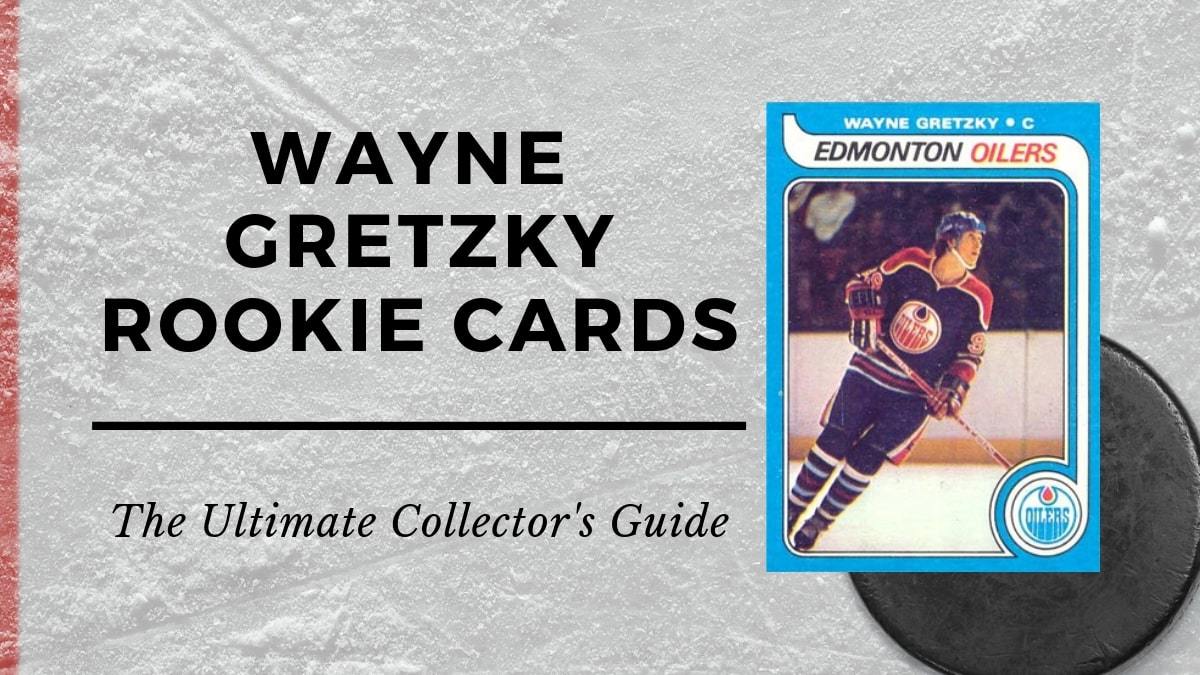 Wayne Gretzky rookie cards are some of the most recognizable and most expensive hockey cards in the entire hobby.

And why wouldn't they be?

Gretzky's hockey dominance is practically unparalleled by any other athlete in any other sport in history.

Known for his uncanny smarts and instincts on the ice, "The Great One" simply outplayed his opponents time and time again.

His list of career accomplishments and records is simply incredible.

And in this guide we'll discuss everything you need to know about collecting Wayne Gretzky rookie cards.

Many hockey legends have only one rookie card to their name.

They all have just one rookie card.

But, other legends like Mario Lemieux and Wayne Gretzky have multiple rookie cards.

Distinction: This is one of two mainstream Wayne Gretzky rookie cards, the other being the Topps counterpart of this card. Not only is this Gretzky's most expensive card, it's also the most expensive hockey card in general. O-Pee-Chee cards are typically more difficult to find in high grade than their Topps counterparts due to lower quality card stock and printing standards.

Front Design: The front of the card features a young Gretzky in his Oilers uniform surrounded by blue borders on all four sides. His name, position and the Oilers team name sit across the top of the card. Reverse Design: The reverse side of the card contains Gretzky's personal information and statistics within a big blue skate. There's also a neat cartoon in the upper right with a small bit of trivia about Gretzky debuting at age 17. Many aspects of the reverse of this card help you easily distinguish it from the Topps version. Much of the key facts are also stated in French and the O-Pee-Chee copyright data rests near the bottom as well. I've always liked the huge compliment paid to Gretzky about him being the best prospect since Guy Lafleur just under the stat lines. Condition Issues: As mentioned earlier, Gretzky's O-Pee-Chee rookie is much tougher to find in high grade than his Topps rookie. Centering is almost always off, print quality can suffer and many of them were cut very roughly. And while they certainly give the card a great amount of eye appeal, those blue borders are susceptible to showing wear and tear quite easily.

Distinction: This is the other mainstream Gretzky rookie but it is not nearly as valuable. That doesn't mean these are cheap, by any means, but compared to the more difficult O-Pee-Chee versions these are relatively easier to find in top condition.

Front Design: The front of the card contains the exact same imagery and design layout as the O-Pee-Chee card. 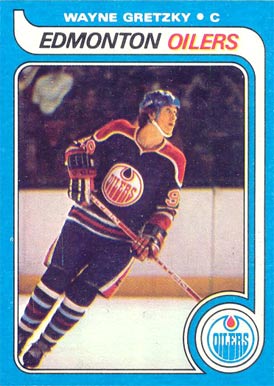 Reverse Design: The back side of the card is exactly like the O-Pee-Chee version in terms of the layout but you'll notice all of the French text is absent. And the O-Pee-Chee copyright information has been replaced with Topps' information as well. Condition Issues: The Topps version isn't quite as condition sensitive as the O-Pee-Chee since print quality was higher. But they're still tough to find in high grade. The blue borders are just as much of a problem in terms of easily showing wear and tear. And centering is still a challenge. But they

Estimated Value: A Topps Gretzky rookie graded in PSA 10 condition sold for nearly $210,000 in 2016. That's about half as much as the O-Pee-Chee PSA 10 that sold that same year to give you some perspective.

Distinction: His O-Pee-Chee and Topps rookies are by far and away his most desirable but this largely overlooked postcard makes for another great rookie card nonetheless. And it's far cheaper, too. These scarce Edmonton Oilers postcards were issued by the team in 1979 to limited geographical distribution.  making them much tougher to find.

Front Design: The glossy, full color imagery presents an excellent shot of the young Gretzky with a bright smile on his face. His facsimile signature in the bottom right corner adds a nice touch to an overall great-looking postcard.

Reverse Design: The back side contains Gretzky's personal detail in the upper left and the Oilers logo in the upper right. While his O-Pee-Chee and Topps rookie cards have his weight at 165, here it lists him at 170. So, he must have packed on a few pounds by then. Condition Issues: As you can imagine, many of these postcards were written on and made their way through the postal system. So, to be of any value they obviously have to be in unused condition. Postcards like these also tend to have edge and corner damage as well. They were bulkier than regular-sized trading cards so they were much more susceptible to damage.

Distinction: Throughout the late 1950s through the early 1980s, J.D. McCarthy captured photos of many baseball, football and hockey players intended to be used by fans to obtain player autographs. They'd be sent through the mail in hopes of securing a signature of a given fan's idol or idols.

Front Design: The black and white picture on the front shows Gretzky with a serious look, hockey stick at the ready. His name is centered at the bottom of the postcard with McCarthy's logo in the bottom left. Reverse Design: The reverse side of the postcard is pretty much blank except for the line in the middle detailing the production information from J.D. McCarthy.

Condition Issues: As with his Oilers postcard, in order for these to be worth much they would need to be in unused condition free of any postal markings. The dark borders can also be prone to showing wear and chipping.

Wayne Gretzky goes down in history as the game's most dominant player of all-time.

Many say that what separated Gretzky so much from anyone else on the ice were his hockey smarts and instinct. He always seemed to be in the right place at the right time in a position to score.

It's arguable that there has never been another athlete in any major sport who dominated as much as Gretzky did.

Some more of his long list of career accomplishments include:

Gretzky was inducted into the NHL Hall of Fame in 1999.

Unless something drastically changes in the sport of hockey or in this hobby, Gretzky's rookie cards will remain the most expensive you'll ever see.