Mario Lemieux rookie cards are some of the most recognizable and most expensive hockey cards in the entire hobby.

And why wouldn't they be?

Lemieux was an extremely gifted athlete and his performance on the ice easily places him among the all-time greats of the sport alongside names like Gretzky, Orr, and Howe.

Known for his dominant offensive ability, Lemieux would frequently be among the league leaders in goals and assists going on to tally 1,723 points in his career.

Whether you know him as the "Magnificent One" or "Super Mario", you know just how special he was.

And in this guide we'll discuss everything you need to know about collecting Mario Lemieux rookie cards.

Some of hockey's greatest legends like Gordie Howe, Bobby Hull, and Maurice Richard have only one rookie card to their name.

But, as Lemieux debuted during the 1980's when the sports card market was growing rapidly and manufacturers were printing cards like crazy, Lemieux actually has five different ones.

Some are considered more mainstream than others but regardless, they each have their place in the hobby.

Distinction: This is one of two mainstream Mario Lemieux rookie cards, the other being the Topps counterpart of this card.

O-Pee-Chee cards were printed for the Canadian market and are typically more difficult to find in high grade than their Topps counterparts due to lower quality card stock and printing standards.

Front Design: The front of the card features a young Lemieux in his Penguins uniform staring intently on the ice.

His name and position are shown along the bottom on a yellow border while the Penguins logo is featured in the upper right.

I always liked the wavy image design of cards in this set in the upper right to make room for the team logos. 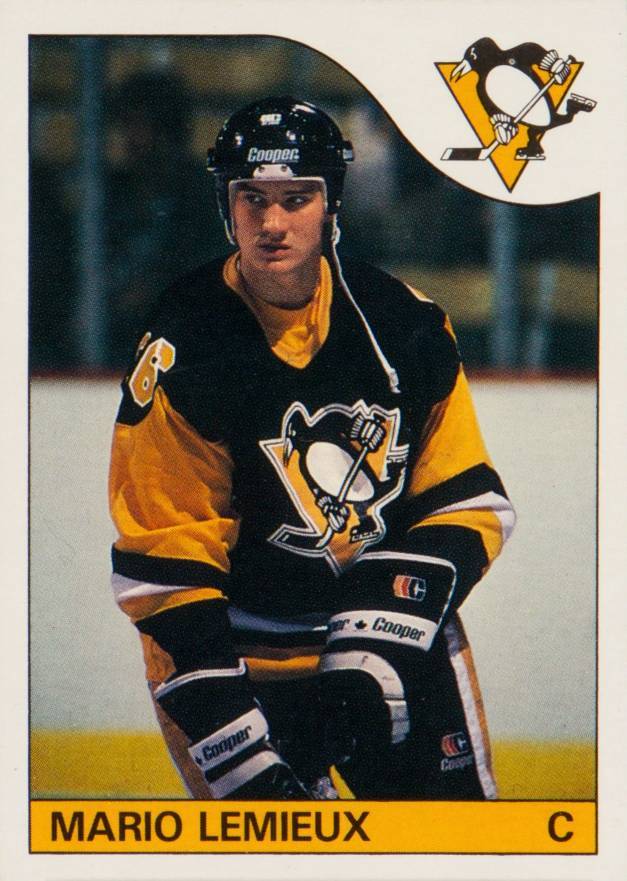 Reverse Design: The reverse side of the card is printed on a horizontal layout and contains Lemieux's personal information and statistics.

The red background is a great offset to the blue print lettering standout.

You can quickly tell the O-Pee-Chee from the Topps version because of the OPC copyright and logo info in the lower left and much of the key facts are also translated in French. Condition Issues: As mentioned earlier, Lemiuex's O-Pee-Chee rookie is much tougher to find in high grade than his Topps rookie.

Centering and print quality are consistent challenges with this card.

Estimated Value: Here is a look at estimated values of O-Pee-Chee Lemieux rookies graded by PSA in different conditions:

Distinction: The 1985-86 O-Pee-Chee wax pack box bottoms featured four cards that collectors could cut out by hand to collect.

The set contained 16 cards in total but instead of being numbered, they were actually distinguished by letters ranging from "A" to "P".

Number: This is card is letter "I" in the sixteen card set.

Front Design: The front of the card depicts a similar design to that of Lemieux's regular OPC card except the borders are yellow and the Penguins logo is in the upper left.

And, of course, they used a different image of Lemieux in the center.

Although collectors had to cut these from the bottoms of wax pack boxes, they measured the same standard 2-1/2" by 3-1/2"...assuming you cut them correctly. Reverse Design: The back side of the card is exactly like the regular O-Pee-Chee version except for the letter "I" in the upper left instead of the number 9.

Usually you can see a small sliver of the cardboard box remaining from being cut out as is the case with the top of this card below. Condition Issues: Because they were hand cut by collectors from the bottom of the wax pack boxes, you'll typically see this with miscuts and other damage.

Estimated Value: Here is a look at estimated values of these cards graded by PSA in different conditions:

Front Design: The front of the sticker features Lemieux crouched over and ready surrounded by gold borders.

There is no text whatsoever as the image of Lemieux clearly dominates the sticker. Reverse Design: The back side of the sticker features the sticker number and Lemieux's name as well as an offer to send in for a team puck.

These stickers were made in Italy as noted in the lower right of the back side. Condition Issues: Because these are stickers and not cards, most collectors had peeled these off of their backings a long time ago.

If found still intact, usually you'll see these with poor centering and surface issues as they are not as sturdy as cards.

Estimated Value: Here is a look at estimated values of these stickers graded by PSA in different conditions:

Distinction: His 1985 Topps rookie is pretty much the same as the O-Pee-Chee version but isn't quite worth as much as you'll soon see.

Number: This is card #9 in a set of 165 cards, a much smaller checklist than their O-Pee-Chee counterparts.

Front Design: The front design is the exact same as his O-Pee-Chee rookie but you'll often find that printing/cut quality was higher on these making them easier to find in high grade. 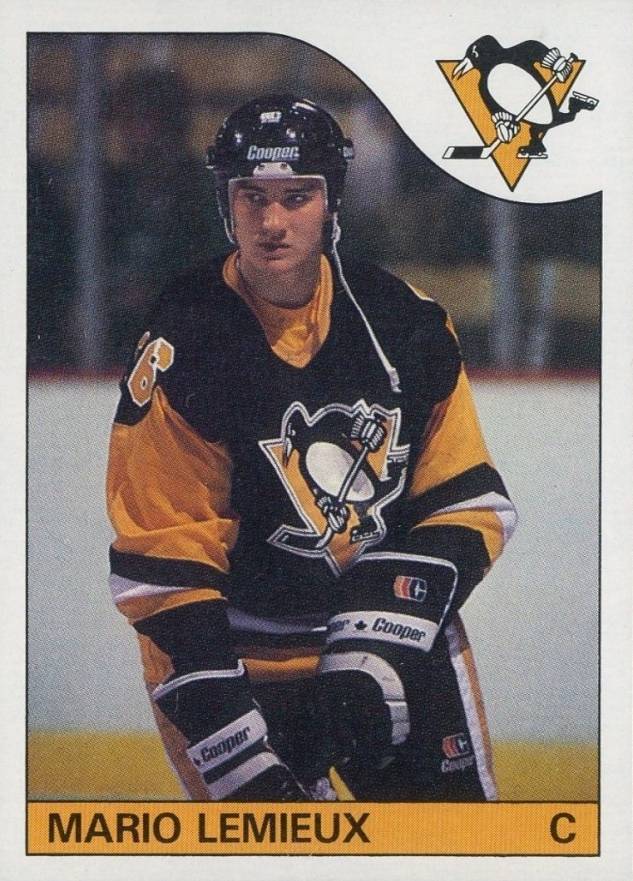 Reverse Design: The back side contains Lemieux's personal infromation and stats but you'll quickly notice there is no text in French on the Topps version.

You'll also find the Topps logo and copyright data in the lower left. 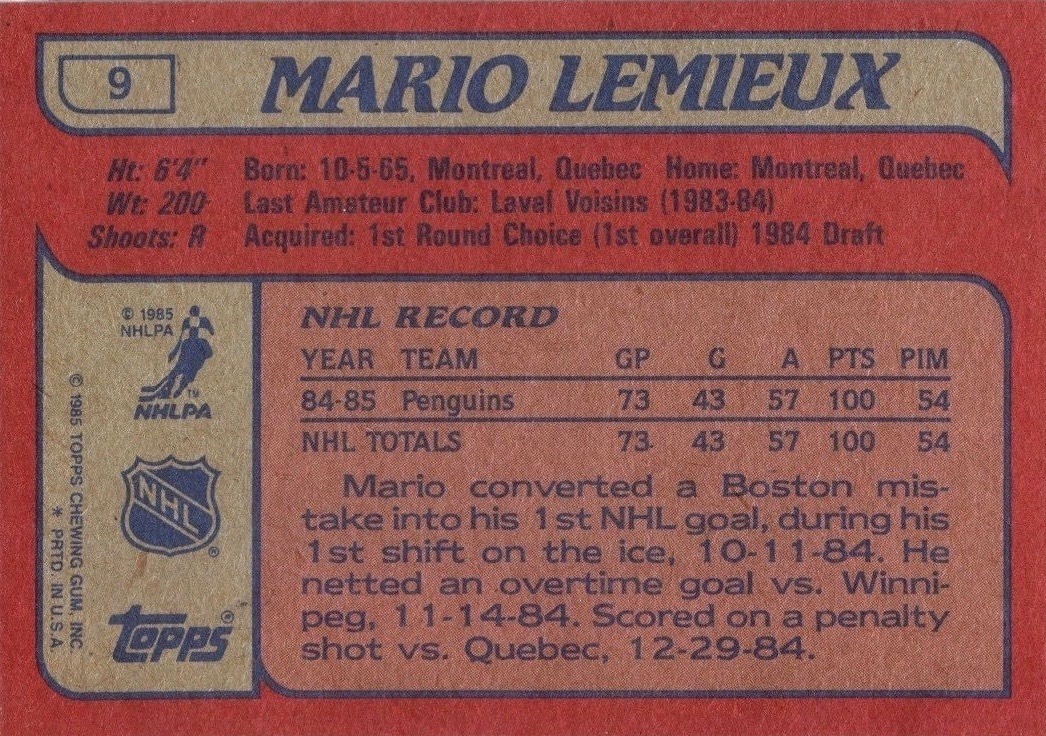 Condition Issues: Print quality of his Topps rookie cards may have been a bit better than his OPC rookies but these cards still commonly suffer from centering issues.

Estimated Value: Here is a look at estimated values of his Topps rookies graded by PSA in different conditions:

Distinction: Also handcut from the bottoms of wax pack boxes, these are nearly identical to the O-Pee-Chee version.

Front Design: The design is the exact same as the O-Pee-Chee version. Reverse Design: The reverse side of the card is almost entirely equal to his regular Topps issue except for the "I" in the upper left to distinguish its place in this smaller set.

You'll also notice the absence of any French translation.

The Topps logo helps you quickly distinguish this one from the O-Pee-Chee version as well. 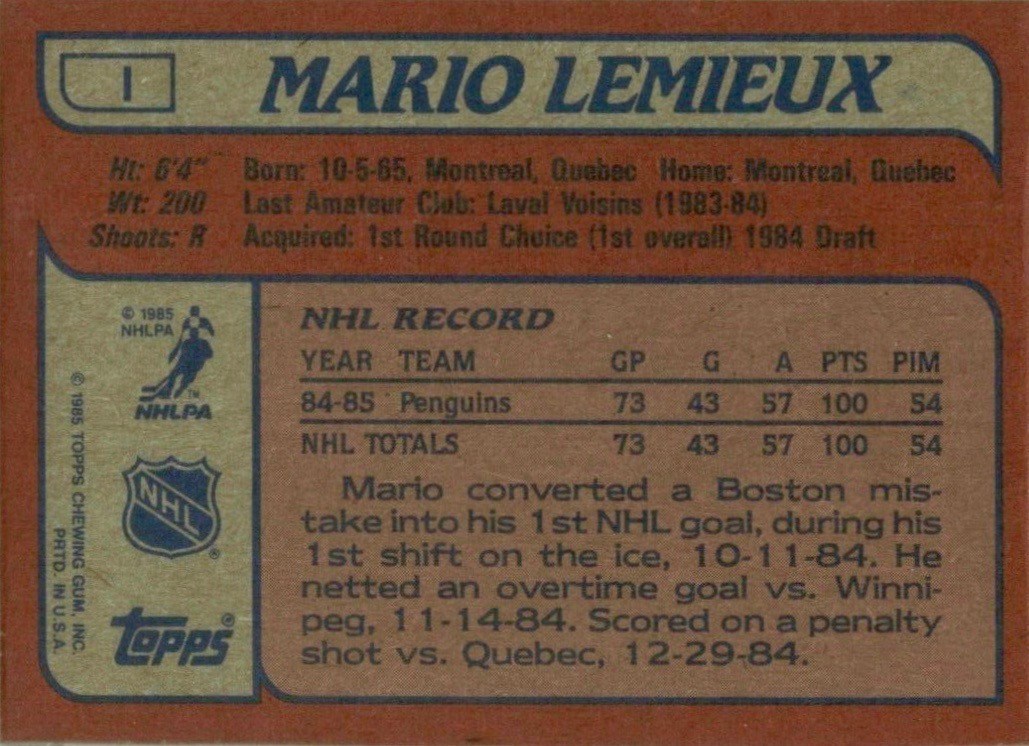 Condition Issues: Like its O-Pee-Chee counterpart, these can easily suffer from surface damage and miscuts since collectors had to cut them off the box bottoms by hand.

Estimated Value: Here is a look at estimated values of his Topps rookies graded by PSA in different conditions:

Mario Lemieux goes down as one of hockey's most skilled players to ever skate on the ice.

Although he had a large frame, he was known for his extremely good skating skills and quickness.

These numbers are even more incredible considering that much of his career was plagued by health issues.

Some more of his long list of career accomplishments include:

Lemieux was inducted into the NHL Hall of Fame in 1997.

Because of his legendary status, Lemieux's rookie cards will remain expensive and in demand for a long, long time.

23 Bobby Orr Hockey Cards You Need To Own