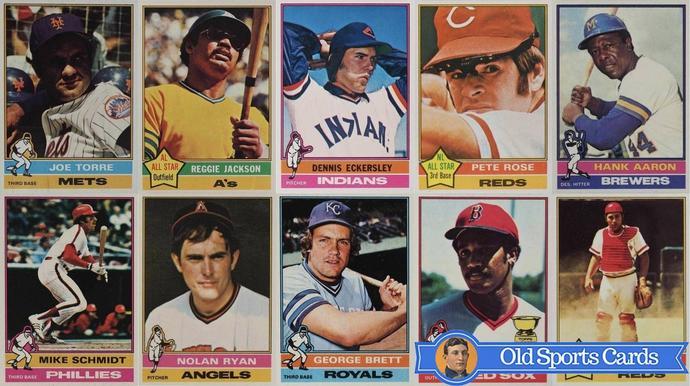 Of all the Topps sets of the 1970s, you may not often hear from collectors that the 1976 Topps baseball card set is their favorite of the decade.

It's just that some of the other Topps set designs of the 1970s appeal to more collectors because of how unique they were.

And, the 1976 set doesn't pack any blockbuster rookie cards outside of the Dennis Eckersley rookie.

Still, there is plenty to enjoy about this set from its straightforward design, great imagery of the players, and a fantastic lineup of stars and Hall of Famers.

And in this guide, I'll run through the 15 most valuable to look for. Though the AFL and NFL originally merged in 1966 while maintaining separate regular-season schedules, 1970 was the first year they combined into one league, the NFL, with two conferences, the AFC and NFC.

And, because of the steep licensing fees to use NFL logos, 1970 was the first year that Topps went heavy with the airbrush on their cards...

If you look through the 1970 set checklist, you'll notice that there aren't any team logos on the card fronts.

Topps maintained this practice for eleven years and ended it finally with their 1982 set release.

Airbrushing aside, Topps delivered a great-looking design overall with this set.

And in this guide, we'll take a look at the 15 most valuable.