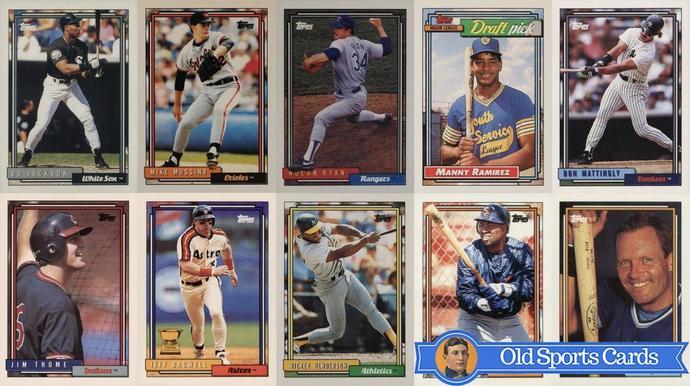 One of the things that I'll always remember about 1992 Topps baseball cards is that they did the unthinkable that year:

they left out the gum.

But they did offer up some parallels for the first time in company history with their Gold and Gold Winner cards.

And the set packed plenty of star power and even a couple of decent rookie cards in Manny Ramirez and Shawn Green.

Sadly, these days, most of the cards in the set aren't worth the cardboard on which they're printed but there are some here and there which can have value in top condition.

Like the 1992 Donruss, Fleer, Score, Stadium Club, and Upper Deck sets, far too many of them were printed and the market is over-saturated with them.

I've always loved the way Topps showcased Nolan Ryan in their 1992 set: the overhead angle perfectly captures the fireballer in the middle of his delivery.

Ryan would first appear in the 1968 Topps set and would continue to do so all the way to the release of the 1994 Topps set...a true testament to his longevity.

With such a long career that spanned across four decades, there is no shortage of Ryan cards to collect.

In top grade, this one can be worth around $30 or so because there are so many Ryan collectors out there chasing even his "junk era" cards in high grade. 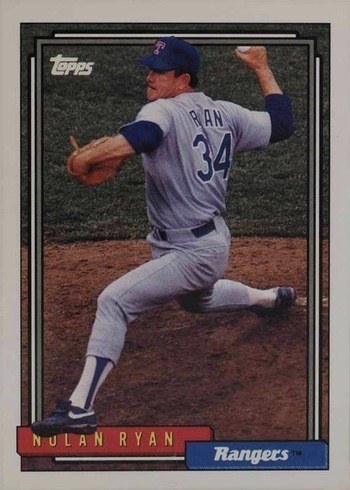 Usually I enjoy it when companies would feature Griffey showcasing his incredibly smooth swing.

But, this card with its horizontal layout also does a fantastic job of capturing him on the base path sliding into third.

From his rookie debut in 1989, Griffey was always one of the key cards to collect in any set in which he appeared. 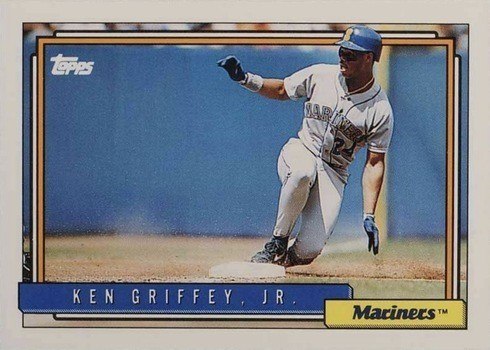 Nolan Ryan finished the 1991 season with 203 strikeouts bringing his career total at the time to 5,511.

That was also his 22nd season in a row with at least 100 strikeouts which surpassed Don Sutton's previous record of 21 seasons in a row from 1966-1986.

It was yet another strikeout record tacked onto Ryan's amazing resume and the 1992 Topps set commemorated his achievement with this card.

And the company did so by photographing him at an angle that perfectly captured how intimidating it must have been for opposing hitters to see one of his blazing fastballs coming at them. 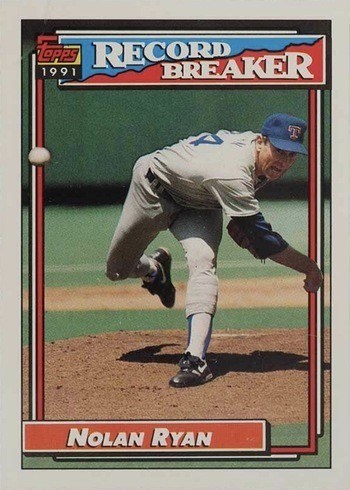 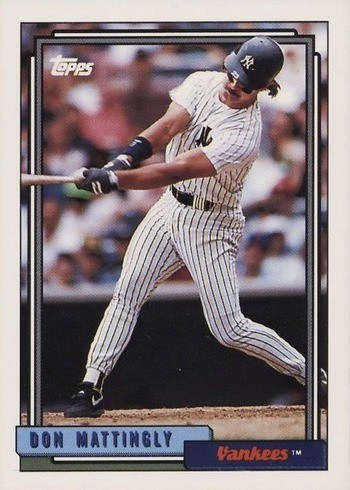 Ripken was one of my favorite players as a kid and I always loved snagging his cards from wax packs.

However, I always thought this card was especially intriguing when I first saw it.

I remember thinking at the time that, although it made for a great card picturing Ripken alongside the plaque of Lou Gehrig, it could have jinxed his entire streak.

After all, baseball players are some of the most supersticious athletes aren't they?

Why tempt the baseball gods in this way?

It turns out that it didn't matter and he'd go on to break Gehrig's continuous games streak on September 6, 1995 after playing in his 2,131st consecutive game. 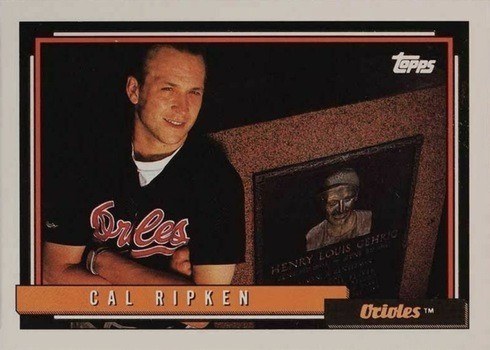 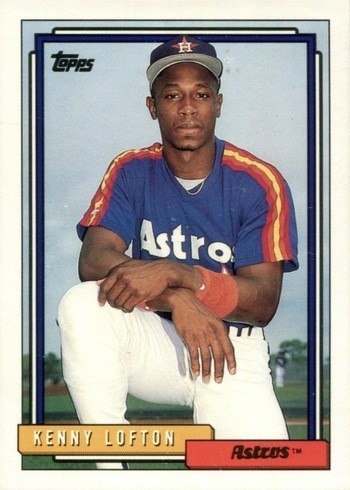 Mike Mussina retired from baseball with a reputation as a top-notch pitcher but his career numbers didn't quite appear Hall of Fame-worthy on the surface.

Until sabermetrics came around.

It turns out that when you adjusted Mussina's numbers for the fact that he pitched his entire career in the A.L. East in hitter-friendly ballparks during the steroid era, he was actually very much a Hall of Fame-caliber pitcher.

Once he was finally elected in 2019 during his sixth year of eligibility, his rookie cards received a bump in value.

He would appear in the Bowman, Score and Upper Deck sets in 1991 but his Topps rookie card did not surface until 1992. 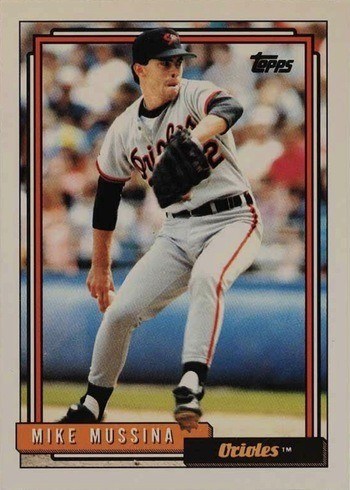 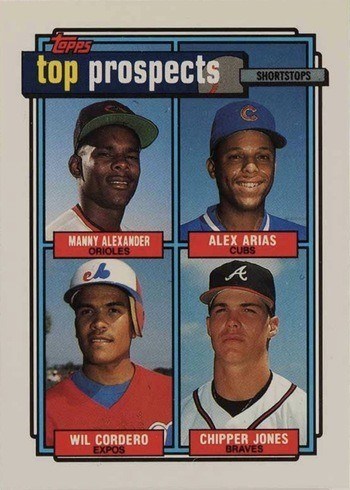 Ivan Rodriguez was unquestionably one of the greatest catchers who ever played the game.

The former MVP and 14-time All-Star could do it all as he accumulated 13 Gold Glove and 7 Silver Slugger awards over his impressive career.

And he made it incredibly difficult for opposing teams to steal bases against him as he routinely caught more than 50% of would-be base stealers.

Rodriguez appeared in the 1991 Topps Traded set but later received the iconic "Topps All-Star" trophy logo for his 1992 Topps issue. Ramirez began playing in Brooklyn's Youth Service League at the age of 14 and did so for five years until around the time this photo for his 1992 Topps rookie card was likely taken.

While his legacy would end up tarnished by his use of banned substances, Ramirez finished his career with a .312/.411/.585 slash line and belted 555 home runs.

His career slugging percentage and OPS (.996) rank eighth all-time and his successful clutch hitting in the postseason only added to his reputation of being a big-time hitter.

He definitely had a Hall of Fame-caliber career but the controversy around the usage of banned substances has prevented him from induction so far. 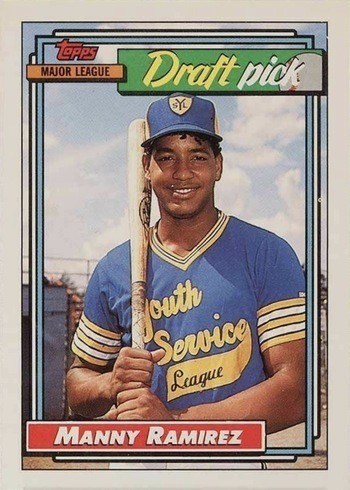 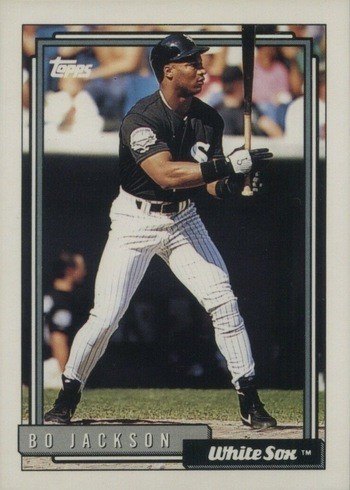 Next up we have Hall of Fame slugger Jim Thome making his Topps debut enjoying some batting practice.

I used to love watching the way Thome would absolutely obliterate the ball on his way to crushing 612 career home runs.

He had such a distinct batting stance and swing.

And not only could he hit for power, he was very successful at drawing walks and by the time his career was finished he would end up with a career 0.402 OBP.

In 2018, Thome's legacy was cemented forever as a much-deserving first ballot Hall of Famer. 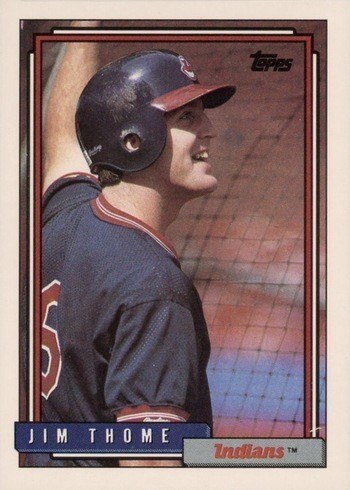 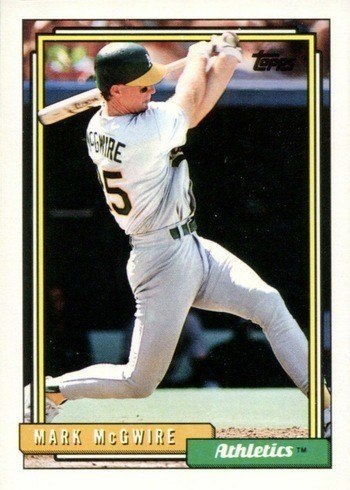 While everyone certainly remembers that Henderson was a monster on the base paths (he is the all-time leader in stolen bases and runs scored after all), he was also an incredible leadoff hitter.

Many will argue he was the greatest leadoff hitter to ever play and I doubt they'll meet much resistance in that argument.

Henderson had a compact swing and terrific bat speed, both showcased exceptionally well by this image that Topps captured.

It's just a great-looking baseball card with massive eye appeal. 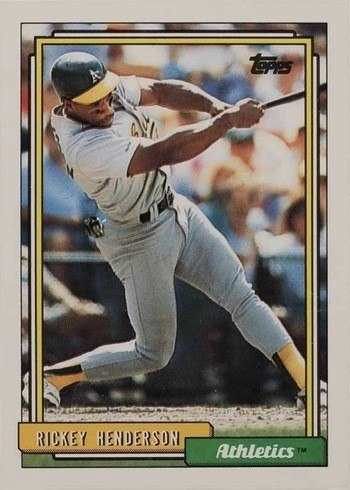 Kirby Puckett was both a fantastic hitter and fielder as he would compile one batting title, 6 Silver Slugger awards and 6 Gold Gloves over his storied career.

And he was also just a fun-loving guy who you could tell truly enjoyed the game.

Just look at the huge smile on his face on his 1992 Topps card, arguably one of his most recognizable cards of the 1990s.

His Topps rookie card will always be his most-demanded, obviously, but I would argue that this one is one of his most easily recognizable.

The imagery sticks in your mind.

Plus, his card was also showcased on the fronts of many wax boxes, as seen at the top of this article, which also boosted its recognition. 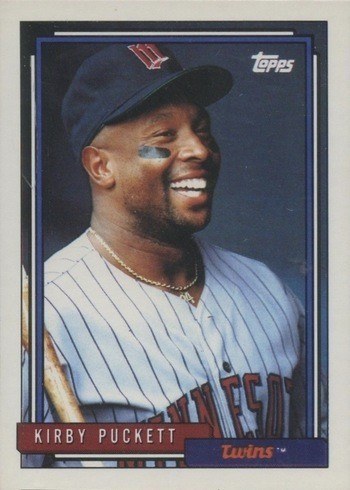 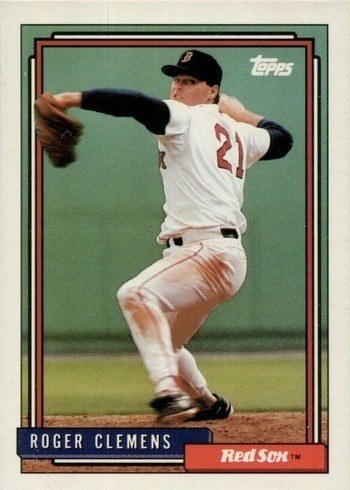 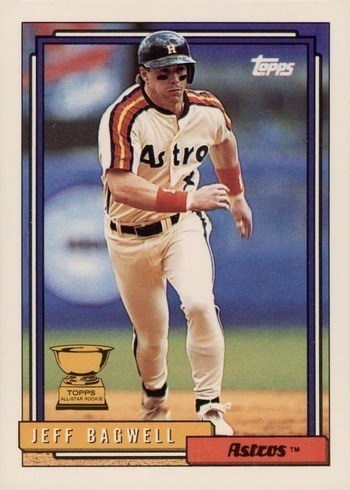 While the values of 1992 Topps baseball cards have not held up well over time, I think the design was terrific.

And while most are not worth anything these days, there are some exceptions that can still be worth money in high grade as you can see. Overall, it's a decent set and cards were of relatively higher quality than others back then as they were printed on white, crisp stock.

Like many Topps sets of the era, there were 792 cards in total to collect.

And don't forget those Gold and Gold Winner parallels.

For the nostalgic collector, this can be a fun set to try and put together but just don't expect to find any gum inserted into packs to keep you company as Topps did not include any that year.