When it comes to my favorite cards of the 60s, the 1963 Topps Mickey Mantle is high on that list.

There is nothing inherently special about it as it wasn't a short print, there weren't multiple variations, nor was the 1963 season itself one of his finest.

It all comes down to the dual-image design and overall color scheme...

Each of the design elements works seamlessly together to make the card visually pop as loudly as a Mantle longball headed for the seats beyond the outfield wall.

Few Mantle cards are as instantly recognizable as this one.

In this guide, we'll look at what makes it so unique, how much it's worth, and how to best go about buying and selling one.

The front of the card boasts a large, bright-colored image of Mantle staring off into the distance complemented by a smaller, encircled black and white shot of him in the lower-right.

A blue background helps the black and white image stand out in front of a vibrant, green nameplate along the bottom.

Mantle's name, team affiliation, and position are listed in the lower-left to help make room for the dual-image design. The reverse of the card uses a horizontal layout with a gold and cream color scheme that pops.

A two-pane box across the top house Mantle's card number, personal information, a cartoon drawing of teammates congratulating him and a couple of quick facts:

The fact that he already ranked seventh all-time in home runs when he was two-thirds of the way through an 18-year career is telling of just how much pop he had in his bat.

Appearing in ten World Series through his first twelve years allowed him to smack those 14 World Series homers, positioning him one shy of Babe Ruth's record of 15 at the time.

Mantle would tie Ruth later that year with one home run during the 1963 Series against the Dodgers and eventually moved into sole possession of the record with 18 when he hit three more against the Cardinals in the 1964 Series.

Finally, along the bottom, Topps included his Major League statistics from the 1951 to 1962 seasons. The entire 1963 Topps set is plagued by centering challenges and those pesky "fish-eye" print bubbles that pop up from time to time in the colored nameplates across the bottom.

Those colored nameplates are also notorious for easily showing wear and tear.

To give you an idea of differences in condition, notice the excellent centering, sharp corners, and beautiful surfaces of the PSA 9 card below versus the PSA 4: One of the quickest ways to tell a high-grade 1963 Topps card from a low/mid-grade card is to observe the lower section first: 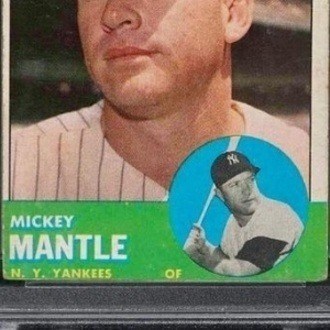 The colored nameplates give the most significant clues to differences in centering, edge wear, corner damage, and print issues on the surface.

Most 1963 Mantles that I come across are usually in the PSA 3 to PSA 5 range as they were well-loved by collectors over the years.

If there are any tears, pinholes, markings, wrinkles, or creases, then the card will almost always grade out as a PSA 1.

As I mentioned earlier, most 1963 Topps Mantles that I see ungraded are in the 3 - 5 range.

Even as a 1 in poor condition, this card has some value since it's a Mickey Mantle.

So what is this card worth?

The following table shows estimated values in conditions ranging from PSA 1 (Poor) all the way to PSA 9 (Mint):

As you can see, condition is everything in this hobby when it comes to a card's value.

Coming off his third MVP award in 1962, hopes were high for another standout season in 1963.

However, on June 5 agains the Orioles, Mantle snagged his foot in the outfield wall and broke it while trying to prevent a home run off of Brooks Robinson.

After recovering, he would return on August 4 and would finish out the rest of the season with the following stat line:

Like the rest of the team in the '63 World Series, Mantle struggled mightily at the plate against dominant Los Angeles Dodgers pitching as he batted .133.

Regardless of how disappointing his season may have been compared to his overall body of work, his 1963 Topps issue is still a fantastic baseball card.