The 1963 Topps Pete Rose rookie card is arguably the most recognizable and important baseball card of the 1960's.

Nolan Ryan's 1969 Topps rookie card gives it a run for its money but if you ask most collectors they'd probably side with Rose.

In my opinion, condition sensitivity is a huge driver in the debate. Rose's rookie is far tougher to find in high grade since the 1963 Topps set faced far fewer printing issues than their 1968 Topps set.

Debating aside, there is no doubt that Rose's rookie is extremely sought after and one of the most valuable baseball cards in the hobby.

To help you learn about the ins and outs of this popular baseball card, here is a comprehensive guide that covers the key things you should know before you buy.

Distinction: The 1963 Topps card is Rose's only recognized mainstream rookie card. It's the key to the set and arguably the most valuable and important cards of the 1960's. It's usually a tough debate depending on who you ask as the Nolan Ryan rookie card is also right up there.

Design: Topps went with a vertical layout but gave the rookie cards a unique design by placing rookies in groups of four showing just the players' faces. Alongside Rose is the New York Yankees' Pedro Gonzalez, Ken McMullen of the Los Angeles Dodgers and Al Weis of the Chicago White Sox. None of those players achieved the success that Rose did but at the time they were all considered potential stars. 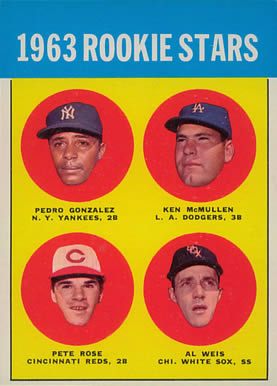 Reverse Side: The reverse side of the card is printed with a horizontal layout and features the Minor League stats of each of the four rookies. There is no other personal or biographical information that accompanies the players as you might find on other rookie card designs of the era. The first thing most collectors ask is: how much is a Pete Rose rookie card worth?

You might be surprised as the price can vary from a few hundred bucks to the high six-figure range.

Condition is everything in the vintage baseball card hobby and it is especially true with this card. In poor condition, the card will earn you some nice money but in top condition you're talking major money.

Professional grading is the easiest way to help judge a card's condition and value and Professional Sports Authenticators (PSA) are usually thought to be the benchmark in that industry.

It's not perfect all the time, but to help give collectors a rough idea of baseball card values they publish their Sports Market Report (SMR) price guide on a monthly basis.

According to the PSA SMR current market values in these high-grade conditions are:

It's not technically his rookie card but it's worth discussing since the image of the All-Star Rookie Cup in the lower right may cause confusion.

In 1960, Topps selected an "All-Star Rookie Team" to honor the best rookies of the 1959 season. Those players received a trophy symbol on their card the following year as a result. Topps continued that tradition off and on from that year on.

Of the three other players featured on his actual 1963 Topps rookie, only Al Weis received the All-Star Rookie Team honor on his 1964 Topps card. Pedro Gonzalez actually showed up as one of the 1964 New York Yankees rookie stars while Ken McMullen's card was designed as any other base card in the set. Pete Rose was one of the greatest but most controversial to ever play the game.

No one questions his ability.

On his way to becoming the game's all-time hit king with 4,256 base hits, Rose was named NL Rookie of the Year in 1963, won the 1973 NL MVP, was selected as an All-Star 17 times, and won three World Series rings and NL batting titles.

The guy could flat out hit.

But it was his well-covered and much-debated gambling on baseball games while a player and manager that keeps him out of the MLB Hall of Fame.

Who knows if MLB will ever let him into Cooperstown? There's no doubt he's got the stats and achievements to make an easy case. It's just a question of the committee's stance on his gambling ever changing or not.

No matter if he gets into the Hall or not, Pete Rose rookie cards will continue being extremely popular and sought after among sports card collectors for years to come.