Rounding out one of the most celebrated decades in baseball card collecting, the 1959 Topps baseball card set delivered a unique design, bright colors, and fantastic imagery.

Shuffle through a stack of them, and you'll notice that these cards really pop!

The only thing missing is Ted Williams, who had signed a deal with Fleer to design a set just for him.

Regardless, the checklist boasts some of the biggest names in the history of the sport.

While his numbers may have been a bit disappointing that year, his 1959 Topps baseball card is quite the opposite.

The red background makes the image of Mantle pop, creating one of his best-looking baseball cards with off-the-charts eye appeal.

Like most any set in which he appeared during the vintage era, this is the most expensive card in the checklist. 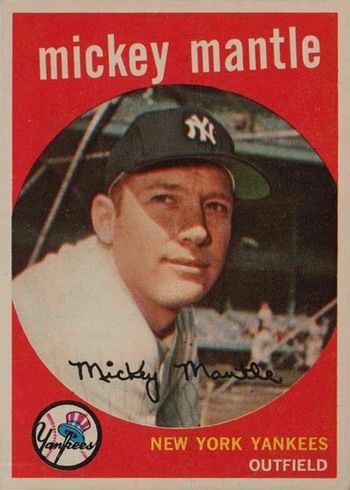 One of the key rookie cards of the vintage era, a young Bob Gibson is pictured smiling and staring off into the distance, centered between a bright, pink background.

The card appears calm and cool but Gibson was absolutely ferocious on the mound.

I still shake my head in disbelief whenever I read or hear about his 1968 season.

Thirteen shutouts...and in the live-ball era, too.

That record still stands today and isn't likely to be broken anytime soon.

For his efforts in what many consider to be the most incredible season any pitcher ever had, Gibson picked up both the Cy Young and MVP awards. 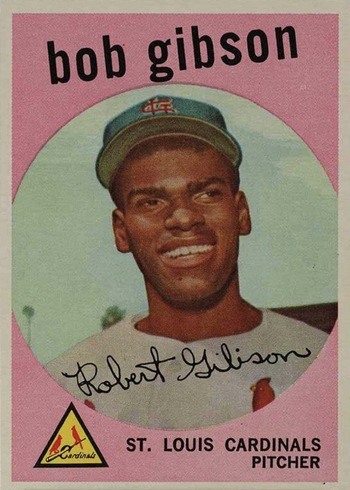 One of my favorite Sandy Koufax cards of all, I have always loved its imagery as Koufax's beaming smile and the bright yellow background shine off the cardboard.

His 10.2 strikeouts per nine innings ratio during the 1959 season indicate that his overpowering speed was on full display, but his 4.05 ERA and 1.49 WHIP show he was still a couple of years away from his legendary dominance.

Even though Koufax took the loss in his only start of the 1959 World Series in Game 5, it wasn't for lack of pitching brilliance as he allowed just one run in seven innings while striking out six Chicago White Sox.

The offensive support just wasn't with him that game as starter Bob Shaw along with Billy Pierce and Dick Donovan, in relief, held the Dodgers scoreless.

Regardless, the Dodgers went on to win the title in six games making this card an excellent tribute to one of the club's most iconic players during a remarkable season. Arguably the greatest baseball player of all-time, Willie Mays is another one of those guys whose cards will be in high demand as long as this hobby is around.

During the stretch from 1954 to 1966, Mays finished outside the top-five in MVP voting just four times, the 1959 season being one of them.

That's how consistently great he was.

That season, Mays batted .313, scored 125 runs, drove in another 103, belted 29 home runs, and led the league in steals (27) while making the All-Star team and earning his fifth Gold Glove.

It was a remarkable season for Mays, but Banks, Mathews, Aaron, Wally Moon, and teammate Sam Jones ended up with more MVP votes instead. 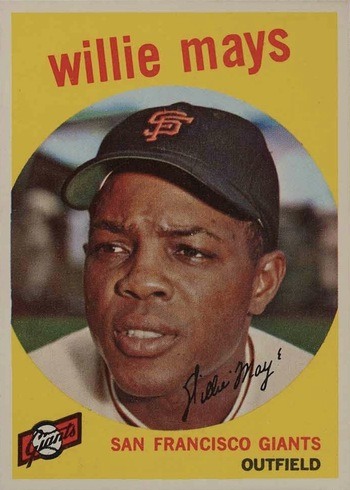 It was one of the finest seasons of his brilliant career.

Had MVP Ernie Banks and his teammate Eddie Mathews not had monster seasons of their own, Aaron would have easily won the National League MVP.

Aaron's cards from any set are some of the most desirable cards in the hobby's vintage segment, but like Koufax's card, this is one of my favorites.

It would have been nice to see Aaron in a batting pose, but the card's bright colors and overall design combine to create stunning visuals nonetheless. Last but certainly not least on our list is the legendary Roberto Clemente, one of the most popular in vintage baseball cards.

The first five seasons of Clemente's career from 1955 to 1959 were well below the incredible performances he would become known for later in his career.

The Pittsburgh Pirates struggled throughout the 1950s, Clemente had struggled to adapt to life in Pittsburgh, and he was even still finishing his Marine Corps Reserve duties by the time the 1959 season rolled around.

However, once settled in and entirely focused, Clemente went on a tear from 1960 to his untimely death in an airplane crash in 1972, becoming one of the most productive players in baseball. Mantle's All-Star card can also fetch high prices in top condition, and the fact that he has two cards on this list shows you how popular he is within this hobby.

The Mick is pictured hitting lefty inside of a shield with a bald eagle on top surrounded by a blue background.

On the reverse side of the card, there is a statement claiming that "Mickey is the best switch-hitter of all time."

That statement couldn't have been more accurate back then, and it still holds today.

I remember reading as a kid how Mickey's father and grandfather would spend hours and hours on an almost daily basis teaching him how to hit from both sides of the plate.

All the work certainly paid off. 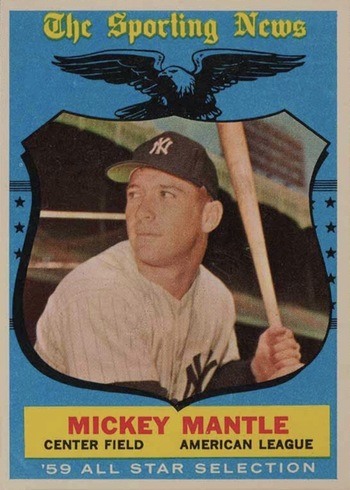 Harry Hanebrink made his MLB debut with the Milwaukee Braves in 1953 but would not play with them again until the 1957 and 1958 seasons.

The Braves then traded him to the Philadelphia Phillies in 1959, where he finished off his career with six home runs, 25 RBI, and a .224 batting average to his name.

If he wasn't as big of a star as other guys on this list, why is his card so valuable in top condition?

Well, it can be quite valuable if you are considering the rarer of two variations of this card: the one that doesn't mention his trade to the Phillies on the card's reverse.

The other variation that does mention the trade is far more affordable.

For perspective, PSA has graded only eight examples of the variation without the trade statement as an "8" compared to around one hundred of the other variation in that grade.

Set builders wanting to complete this set in high-grade with all variations of every card included are willing to pay top dollar to get their hands on a quality "no trade statement" variation. 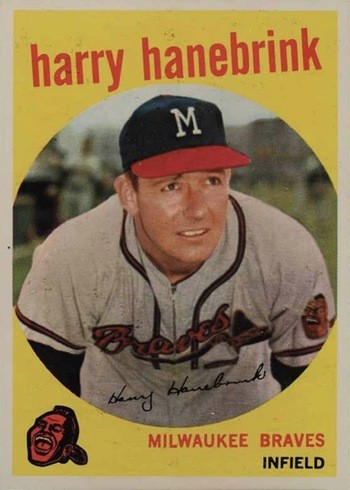 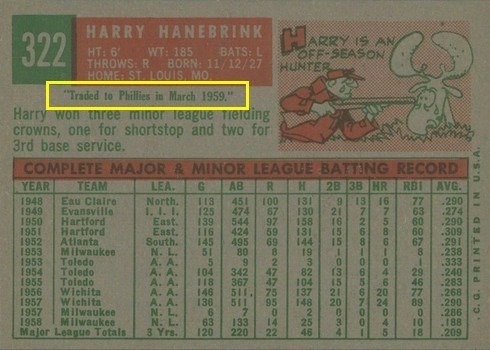 A member of the 1955 World Series champion Brooklyn Dodgers, Billy Loes spent eleven years in the Majors and was known for having an unusually dry sense of humor.

Even though he was a starter for the Dodgers during the 1952 World Series, he famously predicted the Yankees would win in seven games anyway.

He also said he never wanted to win twenty games or more in a season because the Dodgers would expect him to perform at that level every season and cut his pay if he didn't.

The same thing that makes Hanebrink's card so valuable is at play again with the Loes card.

His 1959 Topps issue appears in two variations: one with a statement on the reverse saying the Orioles traded Loes to the Washington Senators and one without it.

There are just 14 examples of the variation without the trade statement graded in PSA 8 condition compared to 97 with it, which is why it's so expensive.

Interestingly, even though Loes should have appeared with the Senators in April of that year, Commissioner Ford Frick voided the trade when Loes couldn't pitch. Most kids stacked their baseball cards in numerical order those days and bound them with rubber bands to keep the group intact.

Surface damage from those rubber bands and being more exposed than other cards in the stack, in general, can make the first few cards in the beginning and end of this era challenging to find in high grade.

Because it's the last card in the set, the Billy Pierce All-Star card is no exception.

Pierce was a seven-time All-Star and shined during his time with the White Sox throughout the 50s and early 60s.

However, not to take anything away from him, this card's value in high grade is driven much more by its scarcity in that condition rather than his skill or popularity. 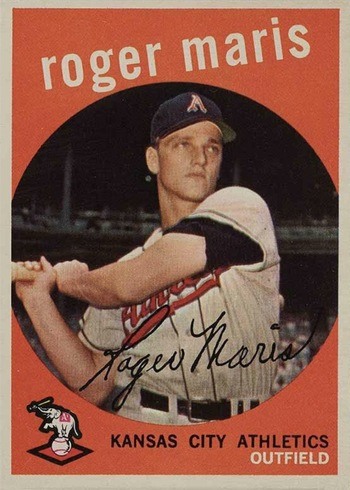 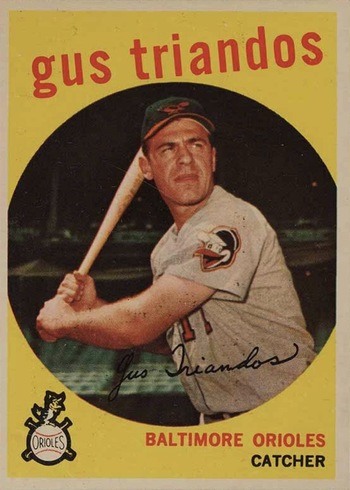 There were so many great sets in the 1950s, and this is definitely one of them.

The bright colors, fantastic design, variations, and a laundry list of Hall of Famers packed within the 572-card checklist offer hobbyists a tremendous collecting experience.

Topps did a fantastic job with this set.