18 Bob Gibson Baseball Cards You Need To Own If you collect Bob Gibson baseball cards then you're aware of one simple fact:

"Hoot" was one of the most intimidating pitchers to ever grace the mound in Major League Baseball.

An Omaha, Nebraska native, Gibson began his professional sports career playing basketball under contract with the Harlem Globetrotters, and baseball with the St. Louis Cardinals before ultimately deciding to pursue baseball.

Here is a list of the 18 Bob Gibson cards that any serious collector should pursue.

This is the only recognized Bob Gibson rookie card and the key to the 1959 Topps set.

He began the season signed to the Cardinals as a relief pitcher and made his Major League debut as such on April 15, 1959.

By July, Gibson was starting, earning his first major league win in his first starting game.

This was just the start to what would be a very impressive career!

This card features a young, smiling Gibson in his St. Louis Cardinals uniform surrounded by a pink background.

Being the most valuable card in the entire set, it can be difficult to find in good condition.

The image is frequently off-center and the hot pink background is often blemished with print marks. 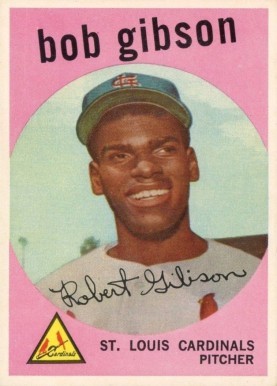 During the 1960 season, Gibson pitched nine innings for the Cardinals before moving between the Cardinals and their minor league affiliate until mid-June.

The 1960 card features two photos of Gibson: a close up headshot printed in color, coupled with a full body photo in black and white.

Gibson dons the traditional St. Louis uniform in both photos, despite spending some time in the minor leagues during the 1960 season. Upon his return from playing winter baseball in Venezuela, Gibson made it to St. Louis for the 1961 season.

Manager Solly Hemus frequently moved Gibson from the bullpen to the starting rotation and back.

In July, Johnny Keane replaced Hemus and made Gibson a full-time starter.

Gibson rounded out the second half of the season with an 11-6 record.

This 1961 card shows a pensive Gibson in a close up headshot.

The card, though not from the peak of his career, remains quite valuable.

It's also easier to find in high grade since the 1961 Topps set was one of the most well-printed of the era.

Usually centering and print dots in the bottom border are the two common issues. The 1962 Topps Gibson card is one of the most valuable in the series.

It is also one of the most difficult to find in good condition since it was a short print.

The card features a green tint that was common in the series, as well as another close up headshot of Gibson.

1962 was a breakout season for Gibson.

Despite a broken ankle that occurred late in the season, Gibson ended the 1962 season with over 200 strike-outs. Gibson got off to a slow start in 1963, as he spent much of the season rehabilitating his broken ankle.

He began to rely on two fastball pitches and a slider, which proved to be beneficial as these pitches led to six straight wins in late July, leading the Cardinals to a late season pennant run.

His 1963 Fleer card is particularly valuable and difficult to come by!

Due to a lawsuit brought by Topps, Fleer was only able to release one series of the 1963 cards, making available cards limited in number, and even more difficult to find in good condition. 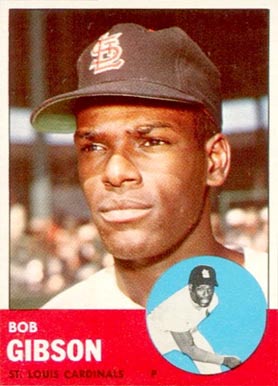 After leading the Cardinals to a National League championship, he also led them to their first World Series victory in 19 years.

Gibson also set a World Series record by striking out a total of 31 batters during the Series.

With only a single headshot of a smiling Gibson, the Cardinals team name, and Gibson’s position as a pitcher listed, this card is known for its simplicity.

It's also among the easier Bob Gibson baseball cards to find in good condition due to improved print quality at Topps that year. He won a personal best 20 games during the course of the season.

He would go on to improve on this personal record in later seasons, but 1965 marked the first of many 20+ win seasons for the pitcher, making this card important for any collector.

Gibson’s 1965 Topps card, one of 598 in the set, features a unique color photo of him preparing to wind up to pitch with the classic St. Louis uniform clearly visible.

Tilt and centering are frequent concerns for collectors. 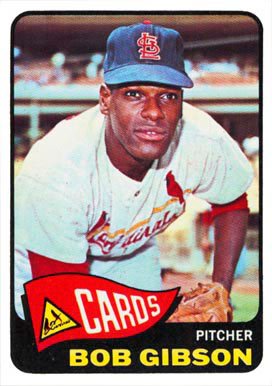 In 1966, Gibson continued to prove his greatness by building on his own personal record.

He pitched 21 winning games that season, beating his previous personal best by one game the season before.

Gibson had the opportunity to pitch in the All-Star game in front of his hometown crowd that year.

The 1966 Topps Bob Gibson card shows Hoot in a strikingly similar pose to that of the year before. 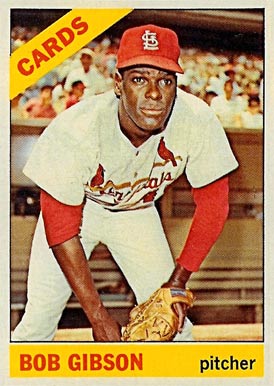 In July of 1967, All-Star Roberto Clemente hit a line drive that nailed Bob Gibson in his right leg.

Ignorant to the fact that the contact had broken his leg, Gibson went on to face three more batters before his bone snapped, just above the ankle.

He did not return until September. Upon his return, Gibson faced the Boston Red Sox in the World Series with no sign of previous injury.

He allowed only three earned runs and 14 hits over three victories over the Sox.

This card is a collector favorite because of its unique style.

The card features a color photo of Gibson’s upper body, with a smirk on his face while he prepares to pitch.

The back of the card commemorates his famous fastball, which was frequently referred to as the fastest in the game! 1968 is arguably the most impressive of Gibson’s career.

With an earned run average of 1.12, Gibson cemented his status as one of the most intimidating pitchers to play the game.

He threw a record 13 shutouts, and pitched 47 scoreless innings.

During the first game of the 1968 World Series, Gibson struck out a record 17 Detroit Tigers.

As a result of his 1968 performance, Gibson is often cited as the reason that the pitcher’s mound was lowered from 15 to 10 inches the following season.

With a single headshot of a stoic Gibson gracing the front of his 1968 card, this card seems humble in comparison with the impact Gibson made during the season.

With brittle, brown edges, the card can be difficult to obtain in good condition. Despite the changes put in place in 1968, Gibson continued to experience success as a pitcher in 1969.

On May 12th, Gibson became the 15th pitcher in Major League history to throw an “immaculate inning”—striking out three batters with nine pitches.

He participated in his seventh All-Star game, and became the third pitcher in Major League history to have 200 strikeouts in seven different seasons.

The card commemorating this season features a single photo of Gibson post-pitch, with a red and yellow color scheme.

It is known for the sharpness of its image, and would make a great addition to any Gibson collection.

Just be aware of the tilt and centering issues that usually come with this card. After a slow start to the season, Gibson once again proved why he is one of the best.

1970 marks his standing personal best 23 win season for the pitcher, and second time Gibson was awarded as the Cy Young winner.

Gibson continued to prove himself as an all around valuable player by continuing his history of great pitching, and building on his record as an impressive hitter.

The bright coloration and bright blue sky in the background makes it stand out among others in the dull 1970 Topps set. The card commemorating the season is exceptionally unique.

It marks the first wide spread use of in game photos on Topps trading cards.

Gibson’s card pictures the pitcher just before his wind-up, in front of a full home crowd at Busch Memorial Stadium.

The 1971 Topps set is unique with its black borders but that can also pose a challenge to collectors who seek this card without wear and chipping. Though the peak of his career was thought to be over as he began to battle arthritis, Gibson continued to be impressive as a pitcher.

This card is distinctly different from any previous Bob Gibson card.

With a bright blue and yellow color scheme, 3D inspired team name, and a photo of Gibson with facial hair not before seen in his earlier cards, this one will stand out from others in your collection! Pain continued to plague Gibson in the 1973 season.

While running bases in August, he tore knee cartilage, keeping him out of the rest of the season.

He finished the season with a 12-10 record, and the Cardinals lost the division championship.

Featuring a close up headshot of Gibson, and simple text indicating his team and position, this card is traditional and appealing. As Gibson continued to age, his previous injuries began to impact his performance on the field.

He was no longer able to sustain the level of performance fans had become accustomed to from Gibson.

He was the first National League player in history to reach this monumental achievement.

The card features mock banners to mark the team name, and a simple red border around a photo of Gibson preparing to wind up to pitch. He ended his career with 3,117 strikeouts, a National League record, and second overall.

He walked away a fan favorite, and one of the greatest pitchers of all time.

His jersey number 45 was retired on September 1.

The final card commemorating a spectacular career is bright and memorable.

With a bold yellow and red border, the card pictures a close up Gibson headshot and includes a copy of his autograph.

This card rounds out the career of an incredible player, and the collection of any baseball fan. Bob Gibson ended his outstanding career with a multitude of awards and records.

He was truly one of the greatest pitchers and all around players to play the game.

Since his time as a player, Gibson has also been named to a number of “greatest” lists including The Sporting News 100 greatest baseball players in 1999, and the most intimidating pitcher of all time by Fox Sports’ The Sports List in 2004.

In his time since leaving baseball as a player, he has served the sports community in a number of roles as a commentator, coach, and community leader.

He is now fully retired and living in his hometown of Omaha.

There is little debate that Bob Gibson was one of the greatest players to ever grace the mound.

As a result, his baseball cards continue to be popular among collectors today.