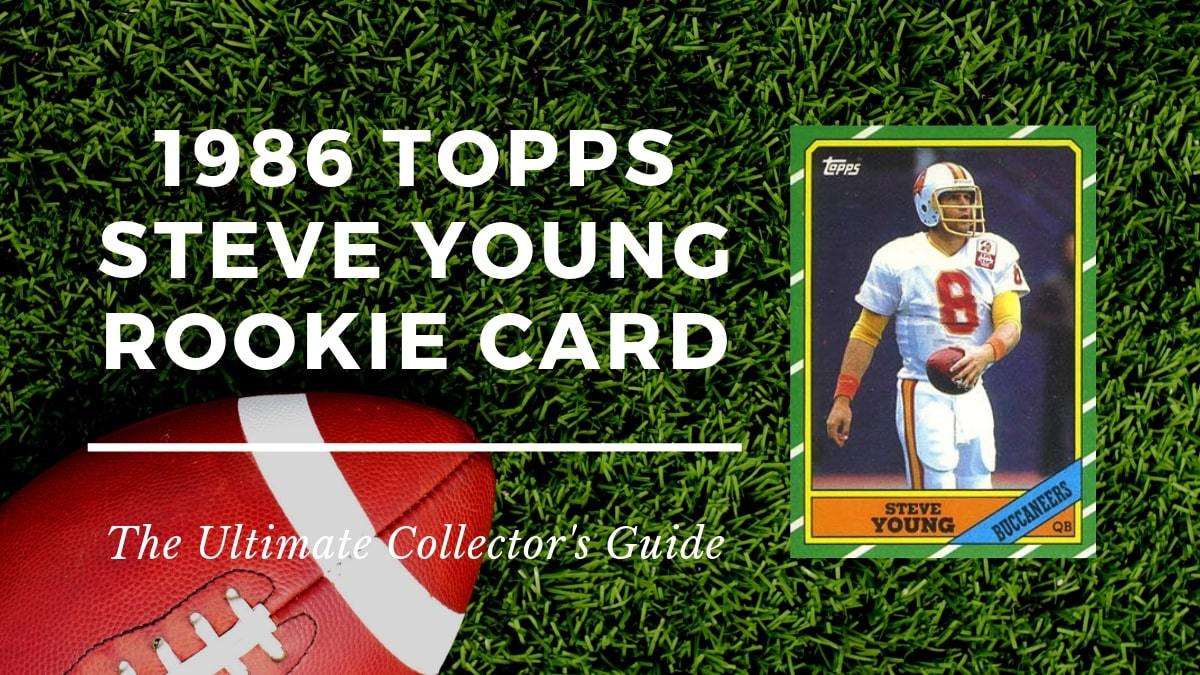 The 1986 Topps Steve Young rookie card is one of the most iconic football cards in the hobby.

Steve Young was one of the greatest quarterbacks to ever set foot on the gridiron.

I loved watching him play. He was efficient as a passer but could also run circles around defenders.

His dominant performances skyrocketed his popularity and so his rookie card remains one of the most popular football cards in the hobby.

So much so, that it's actually one of the most valuable football cards of all-time.

The first thing most collectors ask is: how much is a Steve Young rookie card worth?

But Young’s rookie card is an exception…

Distinction: This is his only recognized mainstream rookie card.  Along with the rookie card of longtime fellow 49ers teammate, Jerry Rice, his is a key to this set packed full of great rookie cards. Other great rookie cards in this set include those of Reggie White, Bruce Smith, Boomer Esiason, Andre Reed and William “Refrigerator” Perry. Growing up as a big 49ers fan, I always thought it would have been great for this card to have featured him in a 49ers uniform. But, it's still a great-looking card. Design: Topps went with a vertical layout in 1986 and featured green borders with white stripes to give them the look and feel of an football field. I've always been a big fan of this set and the design is a big reason why, not just because it's loaded with Hall of Famers and key rookies. An inner yellow border houses an image of Young where he looks like he's warming up for a game. His name, position, and Buccaneers team name are all shown along the bottom border.

Reverse Side: The reverse side of the card is printed with a horizontal layout and features Young’s personal information and stats from the 1985 season. Topps also mentions briefly some of his accolades from his rookie campaign with the Bucs and from his time in college at Brigham Young. Cartoon images of actual sea-faring buccaneers in the background give the card some great character overall. Condition Issues: Chipping and wear showing along the green borders are some of the main issues with this card. Centering can also be an obstacle for collectors looking for a copy in high grade.

Other Cards From 1986: There is also a 1986 McDonald’s card (shown below) that many consider to be a rookie card as well.

The card also depicted Young as a member of the Buccaneers and featured a rub off redemption tab at the bottom that you could redeem for a McDonald's offer.

Pristine examples of these cards with the tab still intact, perfect corners and edges, and no surface damage can still go for $100-$150. 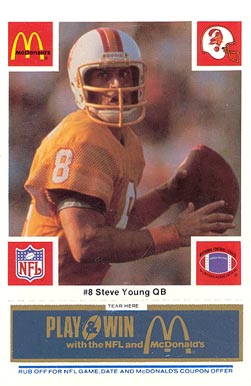 Prior to his NFL career, Young spent some time with the Los Angeles Express in the USFL.

Although, they aren't considered rookie cards, I figured I'd mention them anyway since they are popular among collectors and can go for big bucks.

This is Young's very first football card and is almost as valuable as his official 1986 Topps rookie card.

The card features a patriotic red, white and blue color scheme and a great full color image of Young in his Express uniform. Topps also produced a USFL card for Young in 1985 that featured a patriotic look and feel to it as well.

It's not nearly as expensive as his previous USFL card but it still has decent value in pristine condition. 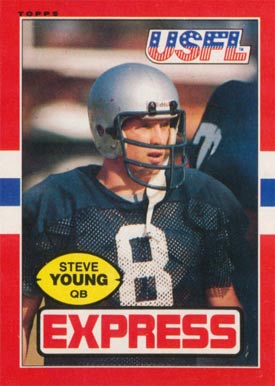 Steve Young was one of the greatest quarterbacks to ever play the game.

Had he not spent four years as a back-up to Joe Montana, his career stat line would have been that much more impressive.

In total he spent 15 seasons in the NFL with 13 of them being as a member of the 49ers and 2 with the Buccaneers.

Known for being extremely efficient as a passer, Young could also run as he'd go on to rush for over 4,000 yards and score 43 touchdowns on the ground.

Those are just some of the amazing accomplishments that he'd put up over his Hall of Fame career.

He was inducted into the NFL Hall of Fame in 2005.