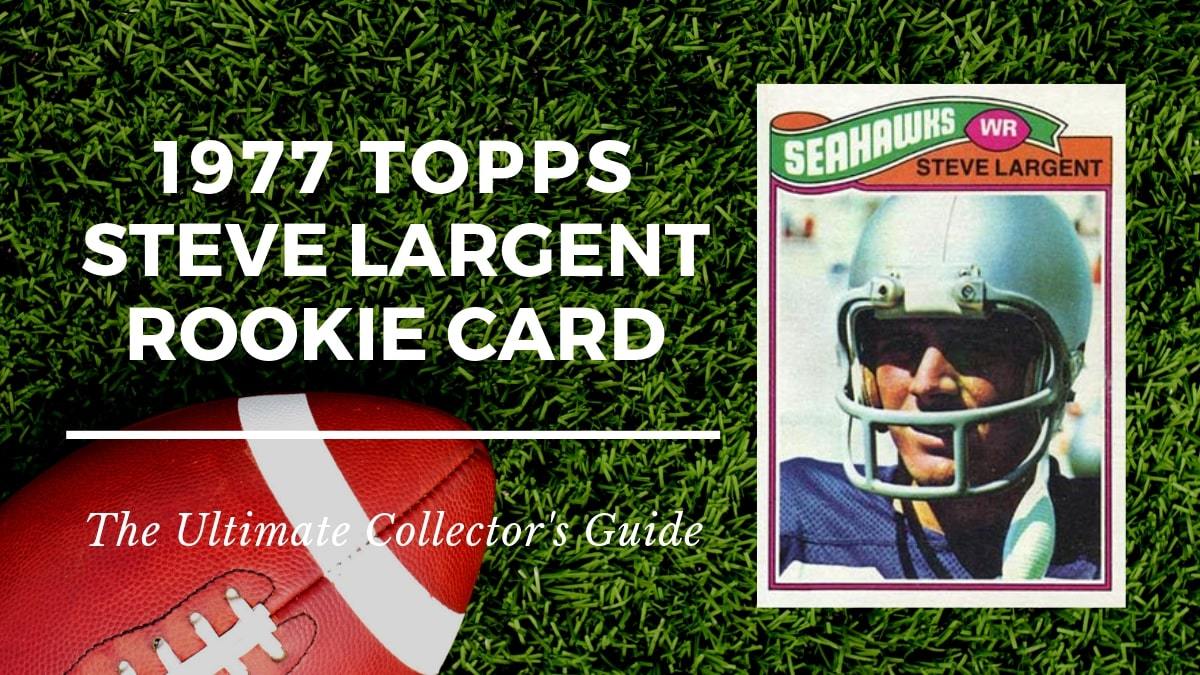 The 1977 Topps Steve Largent rookie card is one of the most beloved football cards of the 1970's.

And, it actually comes in two versions: the regular 1977 Topps and the 1977 Topps Mexican.

We'll get to the differences between the two later...

Largent was known for his incredibly consistent receiving skills despite playing on mediocre football teams during an era when quarterbacks and receivers did not enjoy the same protections they do today.

Because of his legacy and performance on the field, his rookie card can be worth quite a bit these days in top condition.

The first thing that's usually on collectors' minds is the value of this card.

Whether you are talking about his regular Topps issue or the Topps Mexican issue, Largent's rookie card can range in value from $5 or less in poor condition to thousands of dollars in pristine condition.

Below are some estimated prices of each of his rookies in a range of conditions from near mint (PSA 7) all the way to gem mint (PSA 10) as determined by third party grading company Professional Sports Authenticators (PSA).

Distinction: This is Steve Largent's only mainstream rookie card and it's one of the keys to the 1977 Topps set alongside Walter Payton's second year card and rookie cards of fellow Hall of Famers Dave Casper and Harry Carson.

To be honest, I've always been somewhat surprised his rookie card isn't easily the most valuable in the set.

An interesting tidbit about the 1977 Topps set itself was that this was the first set to include Seahawks players wearing Seahawks jerseys with Seahawks stats listed on the back.

In the 1976 Topps set, Seahawks players who had been selected in the expansion draft were still shown wearing jerseys from their former teams.

Front Design: Topps went with a vertical design in 1977 that included large full color imagery of the players front and center.

Largent's name sits at the top of the card with the Seahawks team name within a green banner and his position listed inside a pink football.

The design is fairly straightforward overall and I think Topps did a great job in striking a good balance between creativity and conservativeness. Reverse Design: The back of Largent's rookie card lists his personal information at the top of the card as well as his stat line from his first year with the Seahawks in 1976.

The middle of the card features some nice bullet points about his career achievements in both college and the NFL.

Right out of the gate, Largent got off to a great start as a pro as he was among the top 3 receivers in the NFC. Distinction: The 1977 Topps Mexican Football set was produced and distributed exclusively in Mexico to test if there was a viable market south of the U.S. border for football cards.

The cards are equal in design as the regular 1977 Topps cards with the only difference being that all of the text appears in Spanish.

The production quality of the cards wasn't the greatest and they were actually printed on perforated sheets to make it easier to tear them apart.

Front Design: Right away you can tell the difference between the regular Topps and Mexican Topps versions as Largent's position is listed as "AA" or "Ala Abierta" which is Spanish for "wide receiver".

Other than that key distinction, there really isn't anything else that's different on the front design compared to the regular Topps issue. Reverse Design: The back of his card is written entirely in Spanish.

They both mean the same thing but I have just always wondered why he wasn't listed as an "RA" on the front if they call him a "receptor abierto" on the back.

There are also some differences in font types on the back compared to his regular Topps rookie. Condition Issues: The card is frequently found damaged or off-centered because of the way the cards were produced, packed, and shipped.

Again, the cards were printed on perforated sheets and many believe the cards were torn apart and manually inserted into packs, many of which were not properly sealed.

So, even if you pull one of these from a pack it's not uncommon that it will show some sort of wear and tear.

Steve Largent goes down in history as one of the game's best wide receivers of all-time, albeit somewhat quietly.

Despite not having the greatest quarterbacks at the helm and playing through two strikes, Largent consistently performed and posted eight 1,000-yard seasons over his career.

And, remember, he did so during a time period when the rules were not as friendly to receivers as they are today.

In 1995, during his first year of eligibility, Largent was inducted to the NFL Hall of Fame.

The Steve Largent rookie card will continue to stand out as one of the most highly-desired cards of the 1970's for quite some time.