Paige's other card in the Exhibits set, the 1948 Cleveland Indians team card, offers a nice group shot of the World Series winners that year. Paige can be seen just right of center in the middle row. 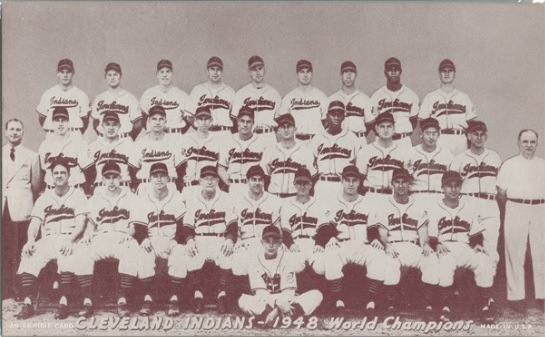 The Cleveland Indians were in a pennant race in 1948 so owner Bill Veeck signed Paige to a $40,000 contract to help.

That same year, he also became the first African American to pitch in the World Series, pitching two-thirds of an inning in Game Five.

The Indians ended up winning the series in six games.

The 1948 Leaf #8 is one of two Satchel Paige rookie cards in the hobby, featuring a head shot of Paige smiling with his eyes closed atop a bright yellow background.

Being a single print, this Paige rookie card is rare enough already but can be incredibly difficult to find in higher grades due to poor print quality and focus.

It's arguably the toughest post-War card to collect.

There are currently only five copies on PSA's population report that grade NM-MT 8 with none grading higher.

The scarcity and importance of the card easily make it one of the most coveted and most valuable baseball cards of all time. 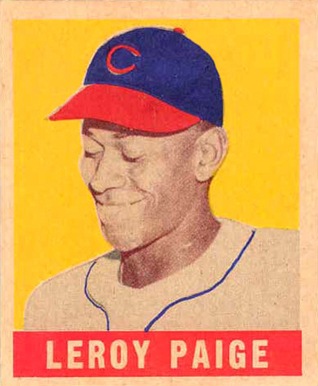 The Indians released him after the season when Veeck had to sell the team to pay for his divorce.

So Paige went back to barnstorming for a while.

Nevertheless, the 1949 Bowman #224 is considered the other Paige rookie card in the hobby and features a head shot of the superstar atop a light green background.

But this time he's got his eyes open.

And if you look at the bottom of the card, you'll also see that Bowman used Paige's nickname but spelled it with two "L's".

Far less scarce than their 1948 Leaf #8 counterparts, this Paige rookie can be had far less expensively.

And as many as 9 copies have graded at PSA MINT 9 condition. Bill Veeck returned to baseball when he bought an 80% ownership interest in the St. Louis Browns.

He quickly signed Paige, who would pitch for the team from 1951 to 1953, earning two All-Star game appearances along the way.

Unfortunately, he would only appear on one more card during that span.

Satchel Paige's 1953 Topps baseball card is arguably his most visually appealing as it displays a beautiful illustration of the legendary pitcher in the famous design of that set.

Easily noticed, though, is the misspelling of his name again as Topps, too, spelled it with two "L's".

A favorite among collectors, it would also be the last mainstream baseball card to feature Satchel Paige. Amazingly, 1953 was not Paige's last stint in Major League Baseball.

After returning to barnstorming for many years thereafter, he found himself financially strapped.

So, to help complete five years of big league service to qualify for a player’s pension, he returned to baseball in 1965 when Kansas City Athletics owner Charlie Finley signed him to pitch in one game.

The A’s were 40 games back anyway, so Finley came up with “Satchel Paige Appreciation Night” to help draw a crowd.

At 59 years old, Paige would become the oldest player to play in a Major League baseball game when he took the mound against Carl Yastrzemski and the Red Sox.

To help give the crowd a show, he sat in a rocking chair between innings while a nurse tended to his aging right shoulder and an errand boy would grab him fresh glasses of water.

Shockingly (or, maybe not so shockingly), Paige tossed three innings of scoreless ball while giving up only one hit--to none other than Yastrzemski.

It was yet another unbelievable achievement for Paige to add to his legacy.

By the time he made his last appearance in 1965, Paige had pitched across five different decades.

And his dominance was just as unquestionable as his longevity.

After facing him during an exhibition game, New York Yankees legend Joe DiMaggio once stated that Paige was "the best and fastest pitcher I've ever faced."

That's a lot coming from a guy who once hit safely in 56 straight Major League games.

It was no secret that Paige had wanted to be the first African American to play in Major League Baseball.

He said in his autobiography that, "Signing Jackie like they did still hurt me deep down. I'd been the guy who'd started all that big talk about letting us in the big time.I’d been the one who'd opened up the major league parks to colored teams. I'd been the one who the white boys wanted to go barnstorming against."

While he may not have achieved that dream, he was the first Negro League veteran elected to the Baseball Hall of Fame by the Committee on Negro Baseball Leagues in 1971.

A true showman and dominant pitcher, Paige's legacy will live on forever as one of the game's best players of all-time.