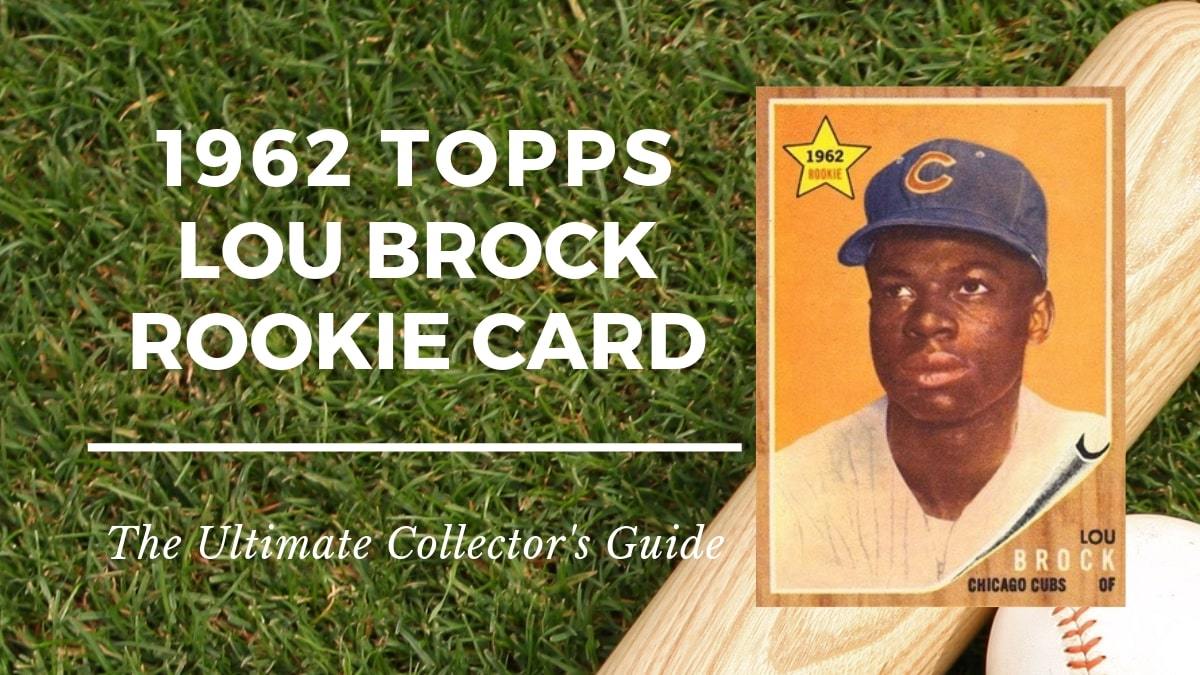 The 1962 Topps Lou Brock rookie card is one of the true great vintage cards of the 1960's, in my opinion.

There are a few things that make this card great:

The orange background and woodgrain borders are instantly recognizable...

And the fact that Brock is wearing a Cubs jersey and ball cap (since he'd build most of his legacy as a St. Louis Cardinal) give it a bit of mystique.

In this guide we'll take a look at everything you need to know about collecting Brock's rookie cards.

Distinction: Although there are a couple of oddball Brock rookie cards that we'll look at later, his 1962 Topps card is considered to be his only mainstream rookie card.

Design: The 1962 Topps  design featured one of the most distinctive design elements in the vintage baseball card hobby: the woodgrain borders. Some love them, some hate them. But they're instantly recognizable.  A young Brock is shown in his Chicago Cubs jersey and cap looking off into the distance. That's probably one of the most notable things about the card, in my opinion. Although he achieved legendary status as a member of the St. Louis Cardinals, he got his start in Chicago. I have no way of proving it, but I'd be willing to bet that had Brock been featured in a Cardinals uniform, his rookie card would be even more valuable. It's a great-looking card overall as the nice, large image of Brock really stands out on the orange background. The "1962 Rookie" star in the upper left corner also adds some nice pop. Reverse Side: The reverse side of the card is printed horizontally and contains his personal information and a brief list of stats. A nice write-up of his minor league achievements speak of his great promise as a young ballplayer and work well to highlight the stats displayed at the bottom. I also like the "Base Knock From Brock" call-out on the large cartoon, too. 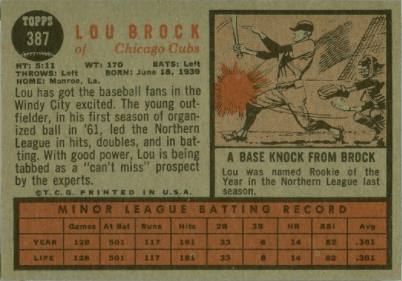 Condition Issues: Those woodgrain borders aren't only famous because of their look. They're also notorious for showing wear and tear quite easily. The slightest nick or ding here and there easily allows the white cardboard interior to show through against the woodgrain border. Centering can also be a challenge, too.  These common condition issues make this one of the most sensitive Topps sets of the 1960's.

The first thing people usually ask is: how much is a Lou Brock rookie card worth?

Lou Brock is a Hall of Famer and was an incredibly popular player, so his rookie card value is boosted by that fact alone.

But the condition of his rookie card is key when determining its value: if it's in mint condition, then you're talking thousands of dollars but if it's dinged up a bit or off-centered then the value drops sharply.

One of the easiest ways to judge a card's authenticity, condition and ultimately its value is by having it graded professionally by a third party like Professional Sports Authenticators (PSA).

And not only will they evaluate a card's condition, they also publish their own price guide called the Sports Market Report (SMR) to help estimate prices, too.

According to the PSA SMR current market values for Lou Brock rookies are:

You can see how quickly the value drops off depending on the condition of the card.

There's no question that his Topps rookie card is the one that most collectors hunt for, but any Lou Brock fan would also love adding these other oddball Brock rookies to his or her collection.

In the early 1960's, Jays Publishing produced 5" x 7" black and white photos printed on thin paper stock that's extremely sensitive to wear and tear. They were distributed in team sets for a quarter each at both stadium souvenir shops and through a mail order program but are more rare than regular Topps cards. The photography and action shots presented ball players in a way that young fans loved and that was much different than what Topps was able to do. Brock is featured on two Jays Publishing photos and this is the version in his away jersey in front of a very dark background. Neither one is particularly more rare than the other. Condition Issues: Those woodgrain borders aren't only famous because of their look. They're also notorious for showing wear and tear quite easily. The slightest nick or ding here and there easily allows the white cardboard interior to show through against the woodgrain border. Centering can also be a challenge, too.  These common condition issues make this one of the most sensitive Topps sets of the 1960's.

The other Brock photo in this set features the young Cub in his home uniform during the day. It's more rare to find than his Topps rookie card but still not nearly as valuable. Lou Brock goes down in history one of the game's speediest players on the base paths and at one time held the all-time stolen bases record.

Brock was so fast and put fear into opposing defenses whenever he got on base.

Brock was an amazing talent and will forever be remembered for his speed and dedication to the game.

That's why Lou Brock rookie cards remain some of the most sought after rookie cards in the vintage baseball card hobby today. And certainly, one of the top rookie cards to collect from the 1960's.