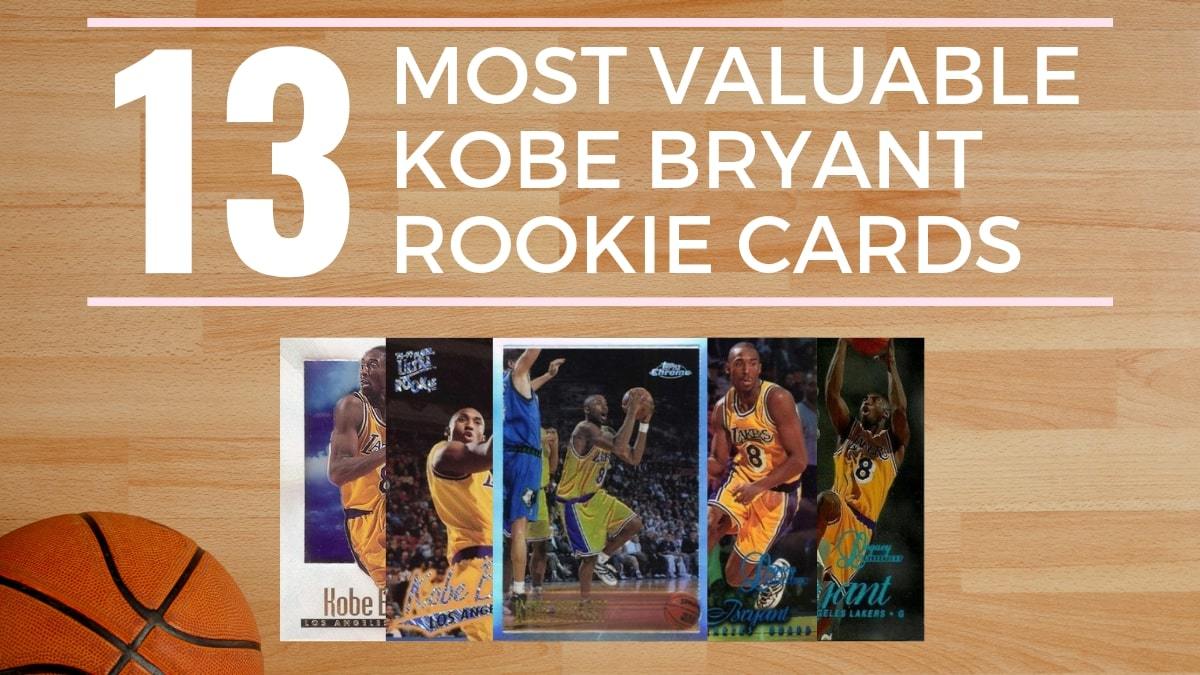 With so many great ones to choose from, how can you pick just one favorite Kobe Bryant rookie card?

There are so many great designs on this list...

Many of them are just as exciting in eye appeal as was Kobe's play on the court.

After making the jump from high school to the NBA, Bryant was one of the most hyped young stars of the day.

I used to love watching him and Shaq play together during that dominant Lakers run.

His dominance on the court left a legacy as one of the greatest players of all-time.

Not to mention the comparisons with Michael Jordan...

There are so many Kobe Bryant rookies but the ones on this list are his most valuable.

This one is without a doubt the most sought after Kobe Bryant rookie card in the hobby and easily the key to a legendary set that features rookies of other stars like Allen Iverson and Ray Allen.  The base version is expensive in its own right but its the refractor parallel whose prices are off the charts. Examples of this card that have been graded in PSA 10 condition have been selling for between $14,000 and $17,000 over the past few years.  And the last time one of these in BGS 10 condition sold in 2017, it went for an incredible $33,500. The 1996-1997 Skybox E-X2000 featured a limited number of cards but was loaded with high quality, cutting edge designs. The "Credentials" parallels were numbered to 499 and featured die cut images of the players along with off-white colored foil borders. These don't come up for sale very often in top grade due to the extreme condition sensitivity but when they do they go for huge bucks. 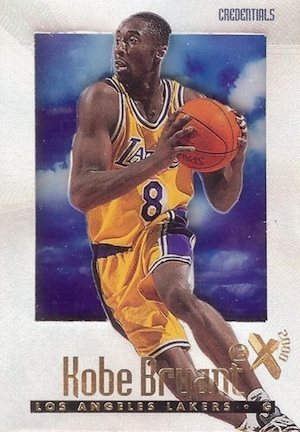 The 1996 Flair Showcase set offered an interesting yet complicated grouping of base cards that were broken into tiers of scarcity that they called "Row 0", "Row 1" and "Row 2".  Each player had only one card per row.  Row 0 were the most scarce, Row 2 was the least scarce, and Row 1 fell somewhere in between. Additionally, each row also went by another name: Row 0 was labeled as "Showcase", Row 1 was "Grace" and Row 2 went by "Style". Despite all of that complexity and tiered rarity, there were a limit of 150 of each player's parallel cards known as the "Legacy Collection". The front designs are nearly identical to the base versions with the differences coming in the teal foil text used on the front and the black and white imagery on the back sides. 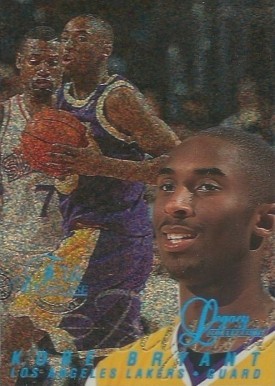 Finest products remain heavy collector favorites across the hobby and this gold atomic refractor of Kobe Bryant's 1996 "Heir" subset issue is no exception. The cards were distributed with a thin plastic coating that was meant to protect the extremely condition sensitive fronts. The imagery on this card is one of the more exciting of Bryant's rookies as it shows him going up for a reverse slam. The design of this Kobe rookie is also exciting as it features the young legend floating gracefully through the air for a layup accompanied by electrifying text and font. The borders can be extremely susceptible to showing wear and chipping. The base version of the card as well as the scarce "Gold Medallion" and scarcer "Platinum Medallion" parallels all used the same imagery but are easily distinguished by the text coloration on the front. 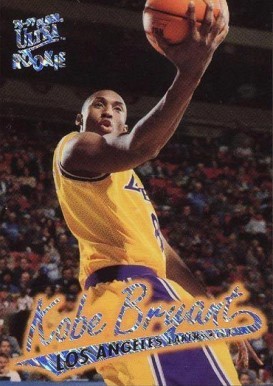 The Row 1 or "Grace" Legacy Collection parallel from this iconic set is another one that's worth thousands of dollars in top grade. The card features a great action shot of a young Kobe driving past a defender looking to score. Again, these parallels are easily distinguished from the base versions based on the teal coloration of the front text. 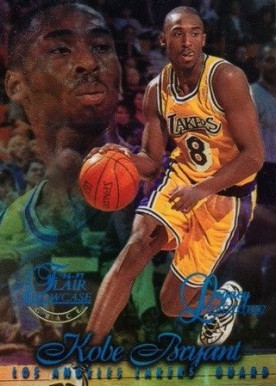 The Row 2 or "Style" Legacy Collection parallel is another extremely valuable card from that set. The last PSA 10 version of this card sold for around $2,500 in 2014 so I'm guessing it would go for much more in today's market. Moreover, there are actually fewer Row 2's that have been graded PSA 10 than either the Row 1 or Row 0 cards making them a bit more rare. And that should boost the price more in theory. Of the three from this set, this one is my favorite because I think the imagery is much more exciting than on the others. 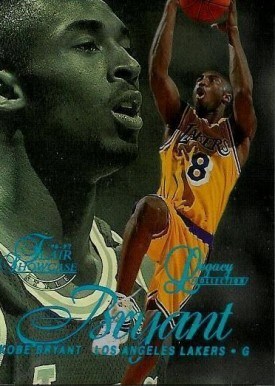 The base version of Skybox's E-X2000 set also makes the list. The card is pretty much identical to the rare "Credentials" parallel that we covered earlier except for the different colored border. These are also prone to easily showing wear and chipping along the colored edges. The bronze-colored "Apprentices" subset in 1996 Finest also came with refractor parallels and this one isn't cheap in top grade. The imagery on this card is loud as it features a young Kobe looking like he's busting through the card itself on his way up for a jam. It's one of the more interesting design concepts on this list and it screams mid-1990s. 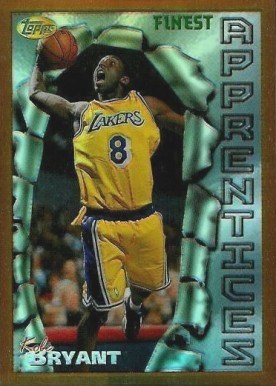 I think the design of the 1996 Bowman's Best card is easily one of the best of the cards on this list. It's straightforward but modern-looking enough to give it some great pop overall. There are a Refractor and Atomic Refractor parallel of the base version. Both aren't cheap but the Atomic Refractor is more rare and carries a much higher price tag. This unique card was part of a 40-card set that was randomly inserted into 1 out of every 10 packs. The hologram of Brant in the lower right corner makes it obvious where this card received its name. I think the card has very strong eye appeal overall and was a great concept in design. High grade copies are tough to come by as you can imagine just how condition sensitive they are. These premium cards, as their name suggests, were high quality in both design and content. The base versions use gold foil for the text on the front but the scarcer "Rubies" parallels use a ruby-colored foil instead. Featuring strong eye appeal and a great design, these cards remain high on the list of Kobe collectors. Grant Hill was one of the NBA's biggest young stars of the era and in a nod to his greatness, Hoops created this set in his name. Some other huge names like Allen Iverson, Ray Allen, Stephon Marbury and Antoine Walker were included but it's Bryant's card that is easily the standout. It's an interesting card overall and including the names of the other players on the card front was a nice touch. 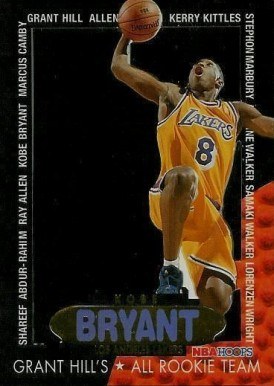 Kobe Bryant was one of the greatest players to ever set foot on the court.

Over 20 seasons with the Los Angeles Lakers, Bryant absolutely dominated the competition.

He played with intensity and a determination that you just don't see too often.

The all-time Lakers scoring leader would also go on to achieve the following:

His legacy as one of the NBA's greatest players of all-time and extreme popularity as a member of the Lakers will keep his rookie cards in high demand for a long long time.