Because of his unique style and offensive wizardry, Allen Iverson rookie cards are some of the most valuable basketball cards produced during the mid-90s.

And whether you love him or hate him, those offensive skills are exactly what made him so popular...

What he lacked in size he made up for with incredible quickness and his signature crossover move that was nearly impossible to defend.

Even during his college days at Georgetown, it was clear that he was going to be a big star in the NBA.

And the hype surrounding his transition to the NBA resulted in different manufacturers producing countless amounts of Iverson rookies.

Much like his playing style, many of his rookie cards are nothing less than flashy.

There are so many great designs on this list as you'll soon see...

This is the undisputed most valuable Iverson rookie card in the hobby.

While the base version can sell for a couple hundred bucks or more in top condition, the refractor parallel sells for far more.

The refractors are more scarce and much tougher to find in top grade and can sell for up to $3,000 in PSA 10 condition.

And in the far more rare Beckett 10 holder they've even sold for as high as $8,600 in the past but that is an incredibly unique case.

The Topps Chrome brand has long since been wildly popular in the basketball collecting community and this is one of the key rookies in the 1996 set alongside those of Kobe Bryant and Ray Allen. The off-white colored foil borders help show a fantastic action shot of a young Iverson driving to the hoop atop a sky background.

Because of the intricate design elements, they can be susceptible to easily showing wear and tear, especially along the foil borders.

Of all his rookie cards, this is easily among his best-looking as all of the design features come together. Iverson's 1996 Ultra rookie card is another one of his most popular, especially in the form of the gold or platinum parallels.

Numbered to just 250 copies, the platinum is the rarer of the two parallel versions and you can easily spot them by looking at the coloration of his name and Philadelphia team name at the bottom.

There's not a lot of action on display with this card as Iverson is merely posing with the ball at his hip but it's still a great-looking card.

And the platinum versions also help give the card some much-needed pop. Another parallel from the 1996 EX2000, the die-cut "A Cut Above" cards featured an action shot of Iverson atop a saw blade design.

The play on words is obvious.

Because of the saw blade design, you can imagine how easy it was for these cards to be dinged up.

It's one of the more interesting designs on this list and comes in as the second priciest parallel in this iconic set. 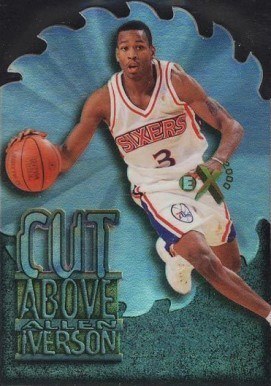 You can't argue that Iverson's 1996 Fleer Thrill Seekers card is exactly that: thrilling.

The front of the card features a lenticular plastic coating that gave it its 3-D look and feel but makes it one of the more condition sensitive of all his rookies.

One of the things I always liked about this card was how on the reverse side Fleer states that Sixers fans were "hopping happy" to have selected Iverson to join another young star at the time in Jerry Stackhouse.

I remember watching those two play and they were an exciting backcourt to watch. One of two Finest Refractors on this list, #69 always seems to see a slight bump in value over the other.

These bronze-colored "Apprentices" cards were part of a subset in 1996 Finest and the refractor parallels that you see here can be worth hundreds of dollars in top grade.

I love the imagery on this card as a young Iverson seems to bust through the card as he's about to dish the ball to a teammate.

Such a great card from one of the hobby's most memorable sets. The other Finest refractor on this list was Iverson's #280 card that was part of the "Heirs" subset.

Like the previous Finest card, this one is extremely condition sensitive and that's why they were originally distributed with a protective coating on them.

Whether the card still has the protective coating on it or not doesn't seem to affect the value all that much.

Both of Iverson's Finest cards are fantastic but if I had to pick one I think this is my favorite of the two as the eye appeal is incredibly strong. 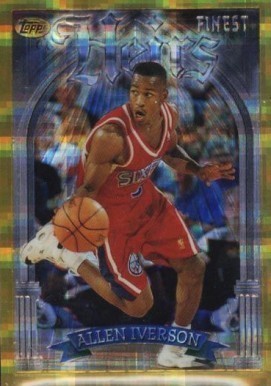 The overall look and feel is much the same as the Bowman's Best set but there is a noticeable notch in the lower-right corner.

This card is loaded with color and shine which really help to complement the image of Iverson going up for a lay-up. Another key chromium product released in 1996-97 was the Bowman's Best set which featured base cards along with rookie card and retro card subsets.

Iverson's was the first rookie in the subset that included other popular players like Kobe Bryant, Ray Allen, Stephon Marbury, and Antoine Walker.

The design was modern and flashy while featuring a great image of Iverson driving down the lane.

There are both a Refractor and Atomic Refractor parallel to his base rookie with the Atomic version being rarer and more expensive. Allen Iverson was one of the greatest guards to ever set foot on the court and was a nightmare for opposing defenses night in and night out.

Over 17 seasons in the NBA he would build a reputation as one of the most prolific scorers of his era as he would finish with a career 26.7 points per game average.

His incredible quickness and flashy moves were just too much for defenders to handle.

The iconic guard would also go on to achieve the following:

For his achievements, Iverson was inducted into the Hall of Fame in 2016.

His legacy as one of the NBA's greatest players of all-time will keep his rookie cards in high demand for a long long time.