Joe DiMaggio baseball cards are easily some of the most recognizable and iconic cards in the entire hobby.

Most of them are from the pre-War era but he does have several nice ones from the post-War era, too.

Perhaps best known for his legendary 56-game hitting streak, DiMaggio goes down in history as one of the all-time Yankee greats.

And that legacy creates a huge market for his baseball cards.

In fact, some of them are among the most valuable baseball cards ever printed.

That said, let's take a look at some of Joltin' Joe's most coveted baseball cards!

This card was printed in Canada and was distributed in small quantities in the United States. His first traditional baseball card, a young DiMaggio is shown with a cropped black and white headshot atop a grey background. While not his most valuable card, this one is highly sought after and a key to DiMaggio collectors. 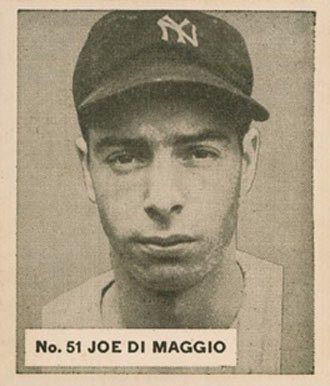 When I think of DiMaggio baseball cards, his two 1938 Goudey issues immediately come to mind. They aren't necessarily my favorites but the images and card designs are unforgettable. A caricature of DiMaggio in a batting stance is shown inside a golden border on both. The only difference between the two versions is that this one has a blank background while the other has small cartoons on it. The more difficult and valuable of the two 1938 Goudey issues is card #274, the one with the small cartoons in the background. Later in the hobby, you would see bubble gum companies like Topps print these types of cartoons on the reverse sides. But, Goudey decided to put theirs on the front. In my opinion, it makes for a messy design but you can't argue it is a unique touch. It was a quick way to present other tidbits of information about DiMaggio right in front of collectors. The design of DiMaggio's 1939 Play Ball card is incredibly simple and straightforward with its black and white image of the Yankee Clipper. But, that iconic smile gives this card strong eye appeal and presents DiMaggio in a lighter mood. A key to the set, it is trumped in importance only by Red Sox legend Ted Williams' rookie card. The following year, Play Ball positioned DiMaggio on the first card in their set which can make this one tough to find in high grade. Again in black and white, this time DiMaggio is shown following through on a big cut. The nameplate along the bottom with a glove, balls, bat and mask scattered about adds a nice design element. The Yankee Clipper and his teammate, Charley Keller, are depicted side by side on his 1941 Double Play issue. Not nearly as expensive as some of his other issues, this one is definitely unique with its dual player design. The cards are frequently found cut down the middle but if left intact will hold more eye appeal and higher value, obviously. Player information and stats are shown along the bottom of the card rather than the reverse which gives this card another uncommon twist. Nearly identical in design to its 1940 counterpart, the 1941 Play Ball DiMaggio swapped in a multi-colored art format. You'll also notice the baseball equipment on the nameplate across the bottom was removed, too. Because this card was among the short prints in the set its value gets an extra boost. Between the 1940 Play Ball issue and this one, I'd have to say I prefer this one. His only post-War card on this list, DiMaggio's 1948 Leaf #1 is among the key cards of this iconic set. While the rookie cards of Jackie Robinson, Stan Musial and Satchel Paige may be the three most expensive in the set, Joltin' Joe's card is still worth big bucks. And it gets a huge boost in value by being the first card in the set which, as you know, usually makes cards more difficult to find in top condition. The 1948 Leaf were the first post-War baseball cards to be presented in color and the company did a great job leading off with this great image of DiMaggio. Joe DiMaggio was one of the greatest baseball players to ever live.

An All-Star in each of his 13 years as a New York Yankee, DiMaggio was one of the most incredibly productive hitters to ever swing a bat.

And let's not forget that incredible 56-game hitting streak.

Had DiMaggio's career not been cut short by three years of service during World War II, he would have put up even more daunting career stats.

With a legacy like his, you can easily see why Joe DiMaggio baseball cards are some of the most desirable in the hobby.