Adding an Eddie Murray rookie card is a common goal for vintage collectors throughout the hobby.

But which one should you add?

There are four different Murray rookies in total and each of them has its own unique story.

Many collectors will opt for his 1978 Topps rookie but his O-Pee-Chee, Hostess and Kellogg's rookies are quite good options as well.

To help you learn about the ins and outs of each of these cards, here is a comprehensive guide that covers the key things you should know before you buy.

Most players of the vintage era will have one, maybe two rookie cards to his name.

But Murray came along towards the end of the vintage spectrum when many different types of brands other than Topps were starting to join the fun.

For example, even Hostess was making cards so let's start here first: Distinction: From 1975 - 1979, Hostess issued baseball cards as a way to help promote their food products to kids.

In 1978, the company released a 150-card set in the form of three-card panels measuring 7 3/4" x 3 1/4" that were printed directly on the sides of the boxes that housed their products.

Sharing a panel with Gary Lavelle and Rennie Stennett, Murray is the key to the 1978 Hostess set.

Front Design: The most noticeable thing on the front is the dotted line that borders the card.

As these were meant to be cut from boxes by hand, those dotted lines are actually guidelines to aid in the cutting process.

The majority of the front is taken up by a nice image of Murry posing with a bat hoisted over his shoulder.

Back Design: The reverse side is plain and straightforward as Murray's personal information and both Minor and Major League statistics are on display. Condition Issues: As these cards were printed directly on the sides of food packaging, you can imagine the dings and scuffing that are commonly seen on these.

Furthermore, high grade examples are someone difficult to come across due to the sheer fact of collectors cutting into and across the dotted lines. Distinction: Even before Hostess jumped into the baseball card market, Kellogg's had been issuing cards for years.

Collectors would typically find these sealed inside boxes of Kellogg's cereal.

They could also send in for a complete set by mail in exchange for some box tops and a small amount of money.

Front Design: The front of the card features a nice image of Murray posing with a facsimile signature across his body.

Murray's name and position sit in a red and yellow banner along the bottom while the Kellogg's brand and "3-D Super Stars" issue run across the top.

The card gets its "3-D" distinction because of the reflective coating that runs along the card fronts.

Back Design: The back of the card is printed horizontally and is jam-packed with information.

From his personal information to Kellogg's and MLB logos to the stat box to the nice write-up on his career to that point, there's just so much to enjoy on the back of the card. Condition Issues: The cards that were found in boxes of cereal are typically those that are found dinged and scratched.

However, the cards that are found in sets that were sent in for by mail are typically seen in better condition since they were shipped separately from the cereal. Distinction: The O-Pee-Chee rookie is the Topps counterpart that was intended for distribution in the Canadian market.

Even though its appearance (at least on the front of the card) is identical to the Topps card, these are relatively less desirable.

Don't get me wrong, these can be quite valuable and collectors definitely love the O-Pee-Chee version, just not quite as much as the Topps version, though.

Like many O-Pee-Chee sets, the checklist was not as large as the Topps set but luckily the Eddie Murray rookie card made the list.

You'll also notice his Topps card is #36 which shows that not only did the O-Pee-Chee checklist contain a smaller amount of cards, they were numbered differently as well.

Front Design: The front of the card features a nice shot of Murray looking into the camera as he's taking a practice swing.

A thin red border outlines the image while his position is given in a small baseball in the upper-right corner along with his name and Orioles affiliation along the bottom.

Back Design: The reverse of the card is the easiest way to tell if you're looking at the O-Pee-Chee version as many attributes are translated into French for the Canadian market.

That, and you'll notice that the O-Pee-Chee mark is called out in the lower-right box. Condition Issues: The quality of O-Pee-Chee cards has always been notorious for being at a lower tier than Topps cards.

Printing standards were not as tight and the stock on which the cards were printed is of a lesser quality as well.

Therefore, these can be tougher to find in high graded compared to their Topps counterparts. 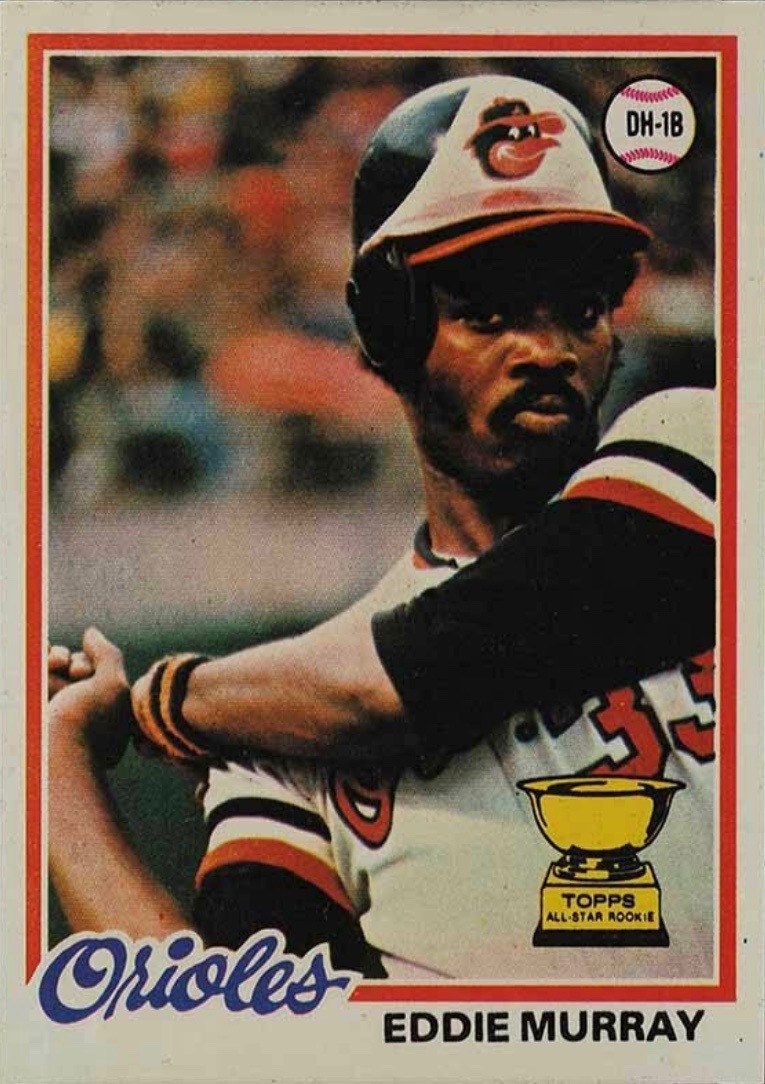 Distinction: Of the Eddie Murray rookie cards on this list, this is his most desirable.

Some collectors will go after his O-Pee-Chee card as well as the Hostess and Kellogg's oddballs but most mainstream collectors stick to his Topps card.

Front Design: Again, the front of the Topps card is really no different than the O-Pee-Chee version.

You could argue that the surfaces will be of different quality because of the differences in stock that were used but the design is identical.

Back Design: The reverse of the card is also printed horizontally but lacks any French translation and houses the Topps mark in the lower-right.

The card has a lot of personal and statistical information on Murray but it feels less "busy" than the O-Pee-Chee card without the need to translate certain aspects of the information into French. Condition Issues: Centering is the most common condition obstacle preventing this card from achieving higher grades.

The first thing that's usually on collectors' minds is how much Eddie Murray rookie cards are worth.

The value of an Eddie Murray rookie card will vary between $1 and $550 depending on which version you are considering and what its condition is.

Below are some estimated prices of each of his rookies in a range of conditions from very good (PSA 3) all the way to mint (PSA 9) as determined by third party grading company Professional Sports Authenticators (PSA).

When you look at Murray's stats, it's easy to see why he was nicknamed "Steady Eddie": year in and year out, the guy was pretty much a lock for 25-30 home runs and around 100 RBI.

Not only could he hit, he was good with the glove, too, as he collected 3 Gold Gloves.

But for whatever reason, it just seems like Murray doesn't get the recognition he deserves for how good he really was.

Some of his most notable accomplishments include:

Murray was clearly one of the game's all-time greats his rookie cards will still be sought after for many years to come.