Growing up collecting these as a kid, the 1990 Donruss baseball cards were some of my favorites of the era.

Either way, there’s no questioning that these cards are instantly recognizable.

The set is loaded with stars and Hall of Famers of the day, but are any of them really worth much anymore?

In this guide, we take a look at the 10 most valuable 1990 Donruss baseball cards.

Like the 1990 Fleer, Score, Topps, Bowman and Upper Deck sets, far too many of them were printed and the market is over-saturated with them.

Or, they'd need to be one of the parallel versions (Aqueous Test, Blue/White Test, etc.) mentioned later in this post that can sell for hundreds of dollars.

Gonzalez was one of the most feared hitters of his era and seemed like a lock for 40+ homers and 100+ RBI every season.

His rookie card in this set appears in two forms: one with a correct image of him batting right-handed and another in which the negative was reversed, making it appear he's batting lefty.

The reverse negative version is far more valuable since it is rarer. Famed artist, Dick Perez, created the artwork for this wonderful tribute to Nolan Ryan dubbed the "King of Kings" card.

You can actually find this card in three different forms, all having to do with variations of the reverse side.

The correct back features the correct card number (#665) as well as a write-up about Ryan.

Another version is missing the number 665.

And the third version actually contains the back of another Ryan card in the set, card #659, which is Donruss's tribute to him reaching the 5,000 strikeout milestone. Ken Griffey Jr. was always a key to any late '80s or early '90s set and this one is no exception.

Shown kneeling in his Mariners uniform, it's not his most exciting card you can own.

But, that didn't stop collectors from tearing through packs in search of it back in the day.

In pristine condition, it can still be worth $25 or so. Sosa's career got off to a slow start so I don't remember many collectors going crazy for this card when it was first released.

But as his career progressed and the home runs kept piling up, he turned into one of the most popular players in the league.

And, even though his reputation may forever be damaged by the PED controversy, his 1990 Donruss rookie still has its place among Sosa fans. It remains to be seen if Bonds will be inducted into the Hall of Fame but I don't think anyone can argue how talented he was.

Back in the late '80s and early '90s during their time with the Pirates, he and Bobby Bonilla became known as the "Killer B's" as one of the most feared hitting duos in the league.

Like the Griffey card on this list, this may not be the most exciting card in the world.

But, because of Bonds' popularity and legacy, it still holds decent value in top grade. 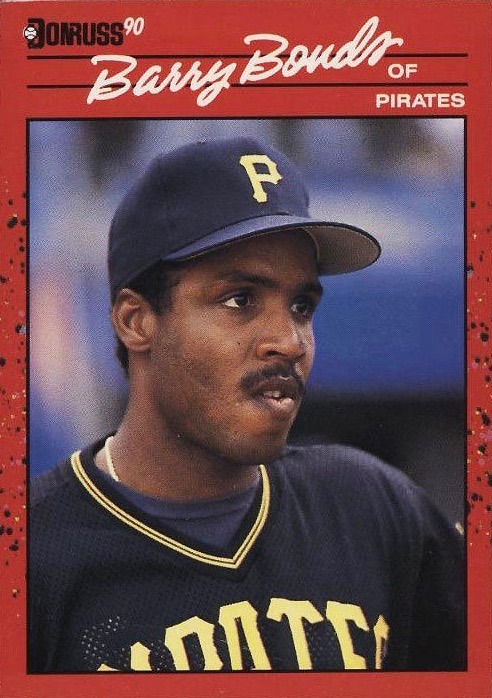 Bo Jackson was one of the most popular athletes in the world at the time having gained notoriety for being a two-sport star across baseball and football.

1989 was particularly a great year for him as it would be the one and only time he'd make an MLB All-Star team.

So, by the time the 1990 Donruss set was released, his was one of the most sought after cards.

This guy was a hero to kids of that era and his popularity remains high to this day. Considering how dominant Rickey Henderson was, I'm surprised that he won only one MVP award.

He was an absolute monster on the base paths, going on to become the game's all-time leader in stolen bases and runs scored.

But, he could also hit for power, too.

The excitement he brought to the game made him one of the most popular players of his day and his status as one of the game's all-time greats helps keep the value of this card respectable in top condition. But, Donruss had a tribute of their own, albeit less flashy.

Card #659 in the set features Ryan in his Rangers uniform with a yellow star next to his name at the top and "5,000 K's" written in cursive along the bottom.

Like his "King of Kings" card, this one can also be found with different variations of the reverse side. I used to love watching Larry Walker play because he was so well-rounded.

He was dangerous at the plate and was a terrific outfielder as well.

It's a shame he barely missed out on the Triple Crown that year.

His 1990 Donruss rookie card isn't the most expensive in the set but it still holds a little value in top grade. By the time you make it to number ten on this list, any number of cards could hold this spot.

But, Bo Jackson's "Diamond Kings" card does seem to stick out a bit more than those so that's why I chose it for this spot.

Perez's fingerprints are once again all over this card with his beautifully-created artwork depicting the legendary Bo Jackson in his Royals uniform. Along with the regular base set, Donruss released several different parallel and test issues in 1990.

Some are more desirable than others but each has a unique story.

And depending on the card and player, some can be worth hundreds of dollars or more...

The images on the fronts of these cards were the exact same as the base set but the fronts themselves had a glossy coating to them and the reverse sides show an "Aqueous Test" label.

There were 264 cards in total and they are highly desirable to this day.

In fact, many can go for hundreds of dollars depending on the player and I've even seen a Juan Gonzalez reverse negative rookie go for more than $1,000. These blue-bordered cards were issued as two separate factory sets, one for the American League and one for the National League.

The concept was to feature the best of both league but when you consider that each set contained 144 cards, by the time you got to the bottom of the list the players weren't exactly of superstar caliber.

The bigger names like Bo Jackson, Nolan Ryan, Cal Ripken Jr., etc. can go from $30 to $70 or more in top condition.

But, the Griffey Jr. card seems to be on everyone's want list as it can easily sell for hundreds of dollars in top grade. The "Blue/White Test" cards showcase the same images of their base counterparts but can come with a blue or white border.

These rare test cards are desirable and can fetch hefty price tags depending on the player.

I have seen the Bo Jackson card below, for example, sell for hundreds of dollars. These preview cards were made available to a select number of dealers as a way to promote their upcoming 1990 set release.

There are only 12 cards in total and the backs of the cards will show each player's card number in that sequence. So there you have it, the ten most valuable 1990 Donruss cards...as well as a look at some other oddball issues that can have even greater value to them.

As you can see, it will take the base cards on this top ten list being professionally graded in gem mint condition to be worth much.

This set was a monster and contained a 716 card checklist in total.

The set is huge and with all of the errors, parallels and variations it can seem a bit overwhelming, to say the least.