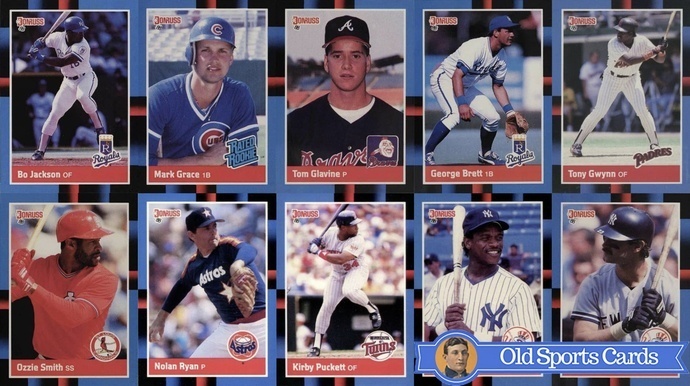 Their design wasn't the greatest.

The rookie cards weren't as great as other sets from the 1980's.

I loved this set as a kid and it still brings many fond memories to me to this  day.

The set contained 660 cards in total, offered several subsets and even a 63-piece Stan Musial puzzle that kept you busy trying to assemble with pieces of it randomly inserted into packs.

While it may not be the best set of the 1980's, there's no question it has its place in the history of the "junk era".

And in this guide, I will cover the 10 most valuable 1988 Donruss cards that some collectors still enjoy pursuing in high grade today.

Like the 1988 Topps, Score and Fleer sets, there were just to many of them printed and that really destroyed much of their value.

This card was one of the hottest in my circle of collecting friends when this card was first released.

I grew up in Indiana so many in the area were Chicago Cubs fans.

And the hype surrounding Mark Grace could not have been bigger so everyone had to have this card.

Grace never did quite reach superstar status or develop into a Hall of Fame-caliber player but he was extremely consistent and effective at the plate and on the base paths. 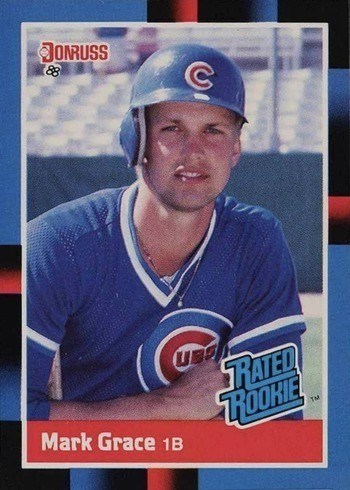 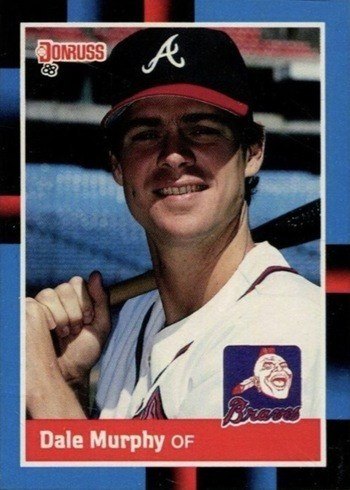 Bo Jackson was all over the place during the late 1980’s: Nike campaigns, dominating home games of Tecmo Bowl on Nintendo, and many other outlets.

What do you expect when you’re both an NFL Pro Bowler and MBL All-Star?

We’ll forever remember Bo Jackson for his two-sport stardom but will also be left wondering what might have been had he not suffered that hip injury on the football field.

His popularity in the baseball card hobby is as strong as ever as many of those kids who collected his cards back in the 1980’s have now re-entered the hobby as adults desiring to relive fond childhood memories. 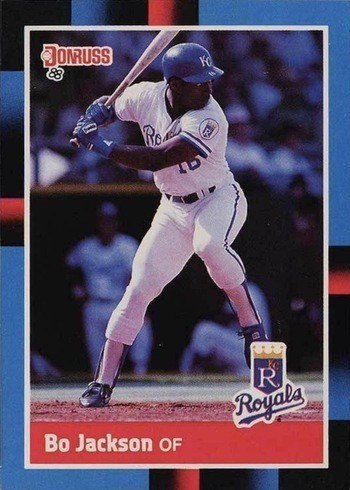 Remember how dominant those Braves teams of the 1990’s were?

Well, you’re looking at one of the reasons why they had so much success.

Glavine wasn’t overpowering but he was extremely crafty and knew how to break down opposing hitters with methodical precision.

His smarts, determination and longevity helped him to rack up 305 career wins, one of the highest totals of any lefty who ever stepped on the mound.

Much like his pitching style, his rookie card may not be flashy but it sits consistently at the top of key cards in this set. 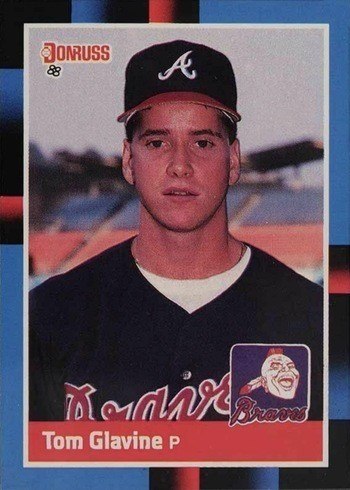 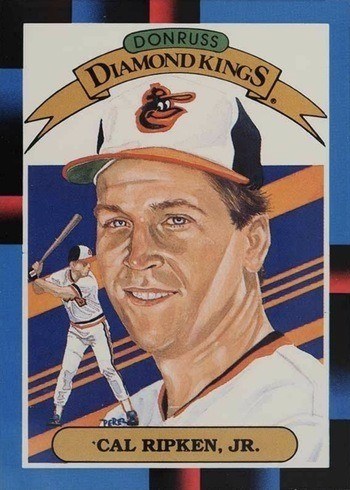 Pictured as a member of the San Diego Padres on his rookie card, Roberto Alomar would lend his talents to seven different ball clubs over his Hall of Fame career.

His time with Toronto, Baltimore and Cleveland was when he truly cemented his legacy as one of the greatest second basemen to ever play.

Alomar had many tools in his arsenal as he consistently hit, defended and ran the bases at a high level.

The 12-time All-Star and 10-time Gold Glover (the most of any second baseman in history) earned a much-deserved induction into the Hall of Fame in 2011. 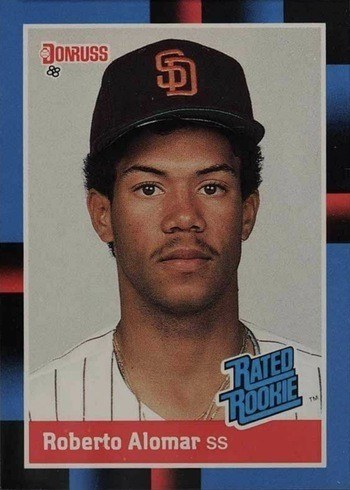 Nolan Ryan needs no introduction and his popularity in the hobby remains as strong as ever.

Whether you’re talking vintage or modern baseball cards, Ryan is always a key to any set in which he appears.

There are just so many Nolan Ryan collectors out there and they’re always looking for any of his cards in top grade.

One of the more visually-appealing cards on this list, Ryan is pictured in his retro Astros uniform midway through his delivery working to blow yet another fastball past an opposing hitter. 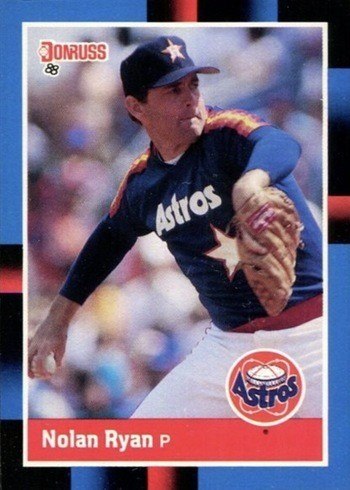 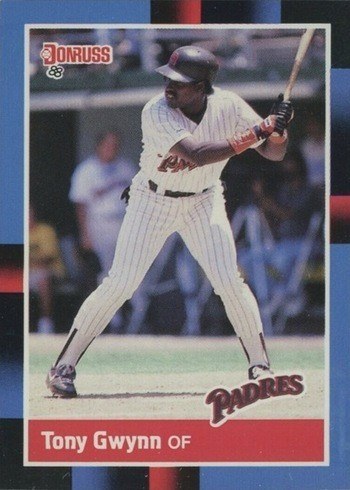 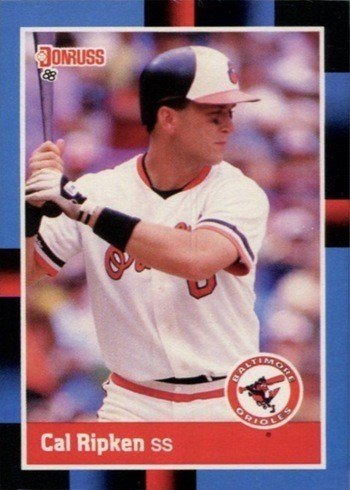 It was hard to find any hotter baseball cards than those of Don Mattingly during the late 1980’s.

He seemed to be on a surefire trajectory to one day join countless other Yankees in the Hall of Fame.

Unfortunately, he was routinely bitten by the injury bug and his production dropped off substantially during the 1990’s.

Today, his cards can still be found listed among the most valuable in many of those 1980’s sets and this one is no exception. 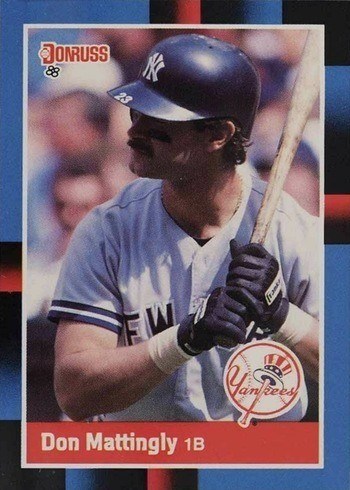 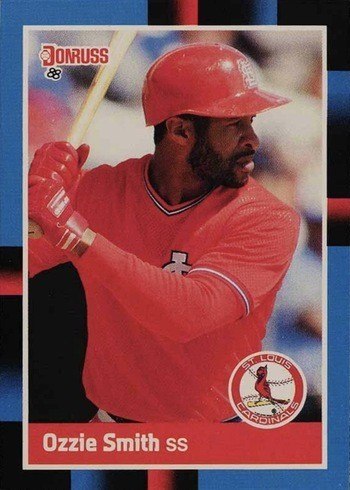 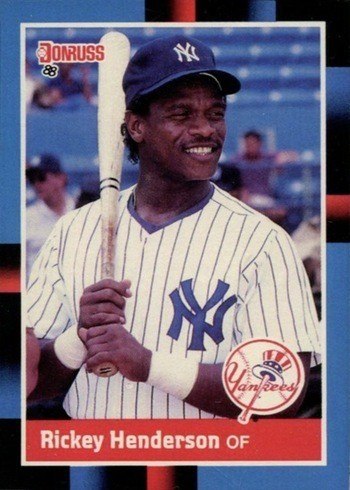 One thing I've always thought was funny was how this card was labeled a "short print", a term used in the hobby when relatively fewer copies of a card are produced than others in a given set.

In an era of excessive printing and market saturation, the term "short print" just sounds funny as there were likely still a bazillion of them in circulation.

Jefferies never quite blossomed into the legend we thought he'd be but his legacy and a bit of a nostalgic factor keep this card among the top in the set. 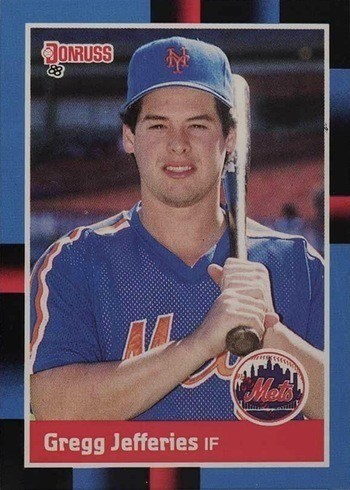 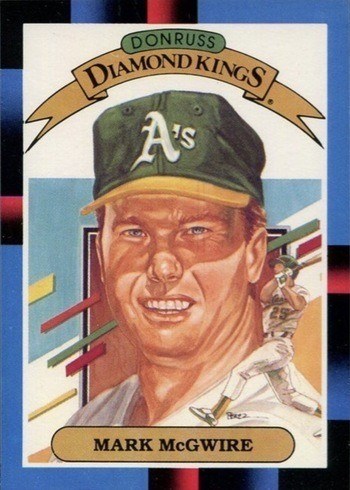 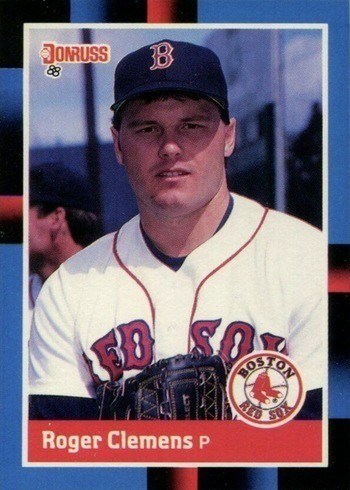 McGwire exploded onto the baseball scene showcasing his raw power as he smashed 49 home runs as a rookie in 1987.

From that point on, Big Mac was one of the sport’s most popular players alongside fellow Bash Brother, Jose Canseco.

This card really gets a strong boost in eye appeal from that bright yellow Oakland uniform and clear blue sky in the background.

Like Bonds, McGwire’s legacy still remains cloudy due to the PED scandal but his early baseball cards still pack enough nostalgic punch to keep collectors searching for them in top grade. 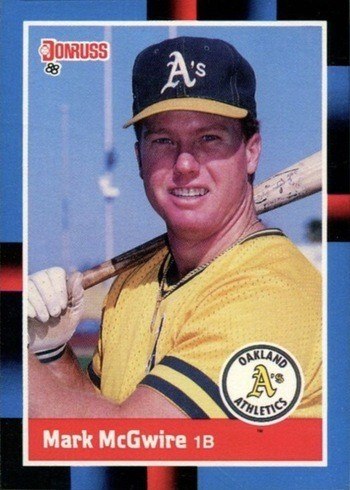 Jose Canseco was one of the most exciting players during the late 1980’s as he brought incredible power and speed to the game.

To this day, I can still see in my mind the poster I had of Canseco hanging on my wall as a kid that celebrated his achievement of 40+ home runs and stolen bases in a single season.

After the PED scandal unraveled, we now know some of his success had to do with a bit of "outside help“ but there’s no doubt he was an incredibly talented player regardless.

Canseco was always one of those guys I searched for in pack after pack of late '80s baseball card goodness. 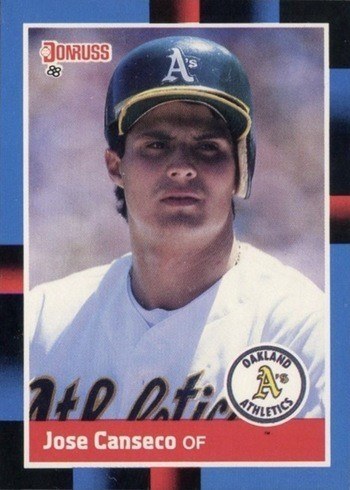 As a kid, I used to love those old Pirates teams that featured Barry Bonds, Bobby Bonilla, and Andy Van Slyke.

Those three made for a hell of an outfield and they were also exciting at the plate, especially Bonds and Bonilla.

We all know the controversy that hangs over Barry Bonds due to the PED scandal but you can’t deny that he possessed an incredible skill set, likely one of the best the game has ever seen.

The guy was an unbelievable five-tool talent and we’ll see if he ever cracks the Hall of Fame.

For now, this second year Bonds card remains one of the most desirable in the set and features a great image of the young slugger in his Pirates uniform. 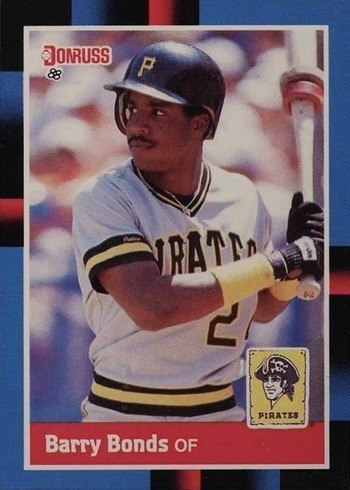 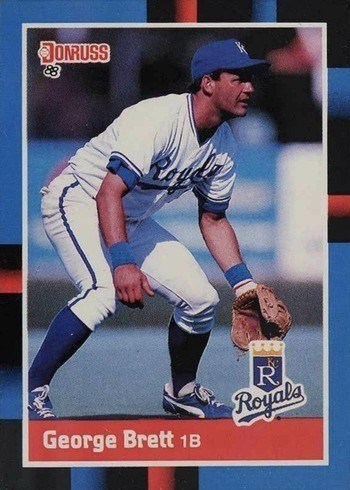 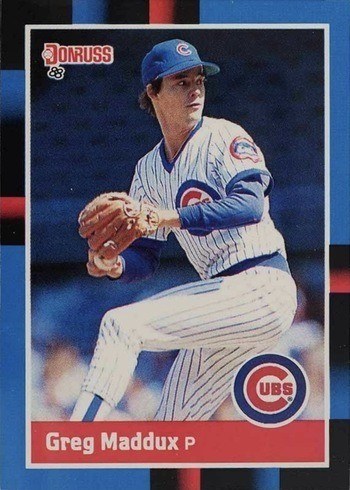 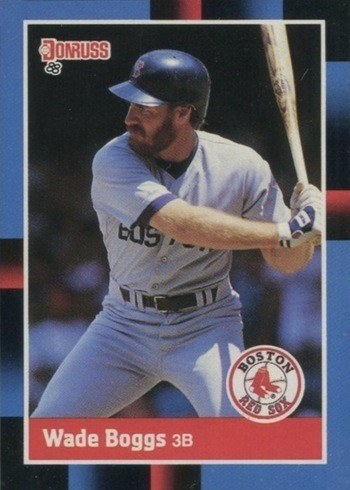 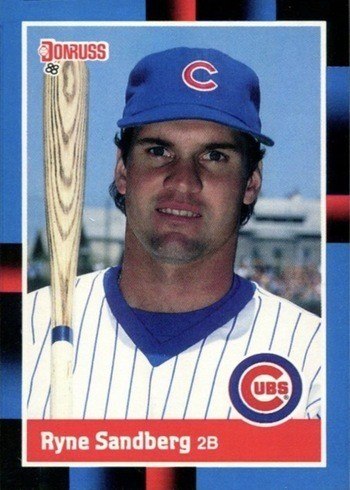 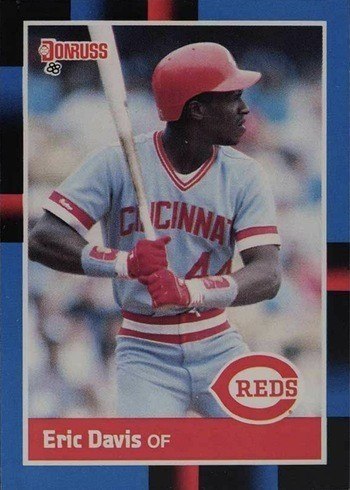 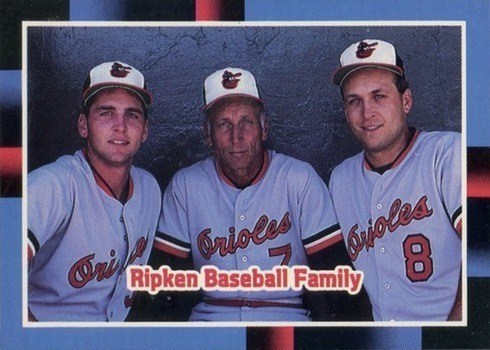 So there you have it, the ten most valuable 1988 Donruss cards.

As you can see, it will take them being professionally graded in gem mint condition to be worth much and that's not easy considering how easily those colored borders will show wear and tear. 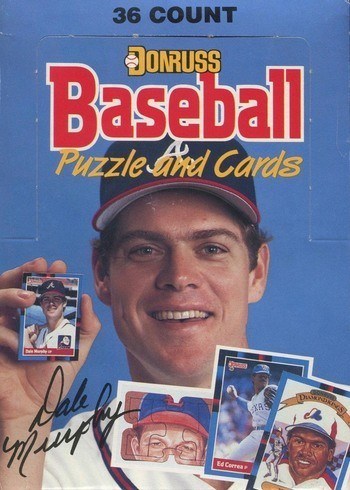 Either way you can't argue there were a few good rookie cards and many great stars of the day in the 660-card checklist.

And along with that Stan Musial puzzle we mentioned earlier, the set also contained multiple different subsets and inserts, including:

To those who love this set, it can really bring some huge nostalgic value and to those who despise it, well, to each his own.