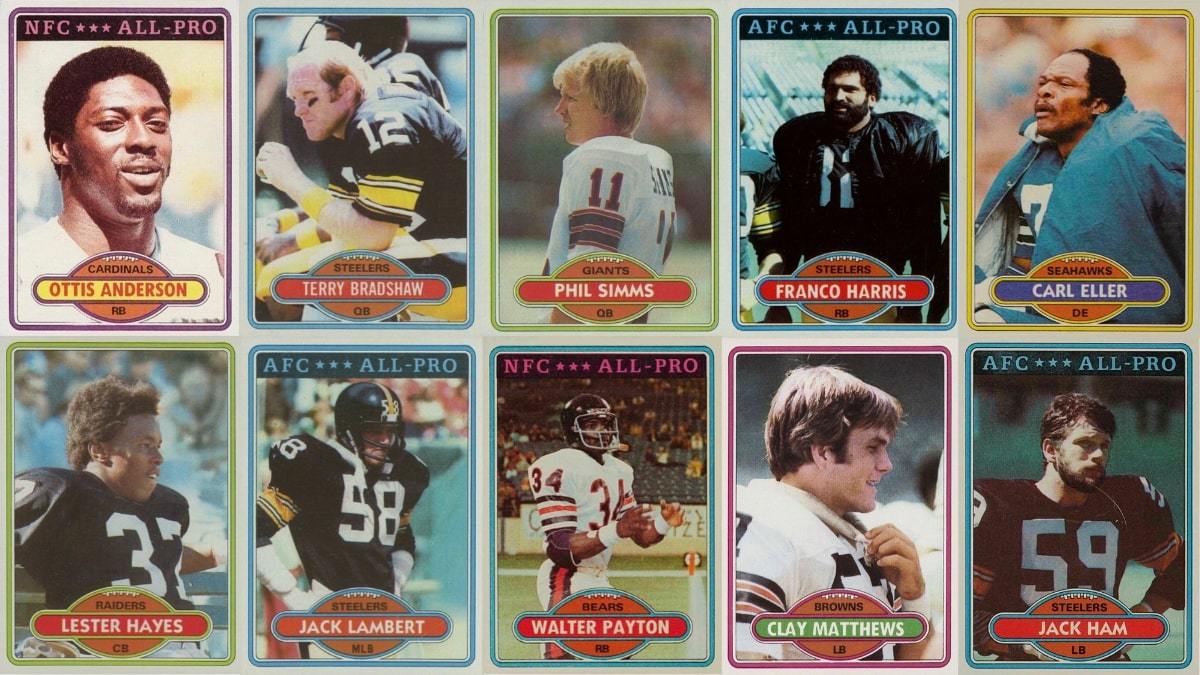 While it may not be the most popular football card sets ever produced, Topps did its best to deliver a decent product with its 1980 Topps football cards.

You won't see any team logos anywhere since Topps still had to airbrush them out due to a lack of a proper licensing agreement, but you will see some decent imagery of the biggest stars of the era.

The checklist may be lacking in Hall of Fame rookie cards, but there are still some great first-year cards of other NFL greats as we'll soon cover.

Whether you love or hate this set, many cards within it can still be worth quite a bit in top condition.

A two-time Super Bowl Champion, Phil Simms may not have put together a Hall of Fame resume but he was one of the most effective quarterbacks of his era.

His MVP-winning performance in leading the Giants to victory in Super Bowl XXI was especially memorable as he completed 22 of 25 passes for an incredible 88% completion percentage, a Super Bowl record.

One of the greatest New York Giants of all-time, Simms' rookie card is worth several hundred dollars in top grade. 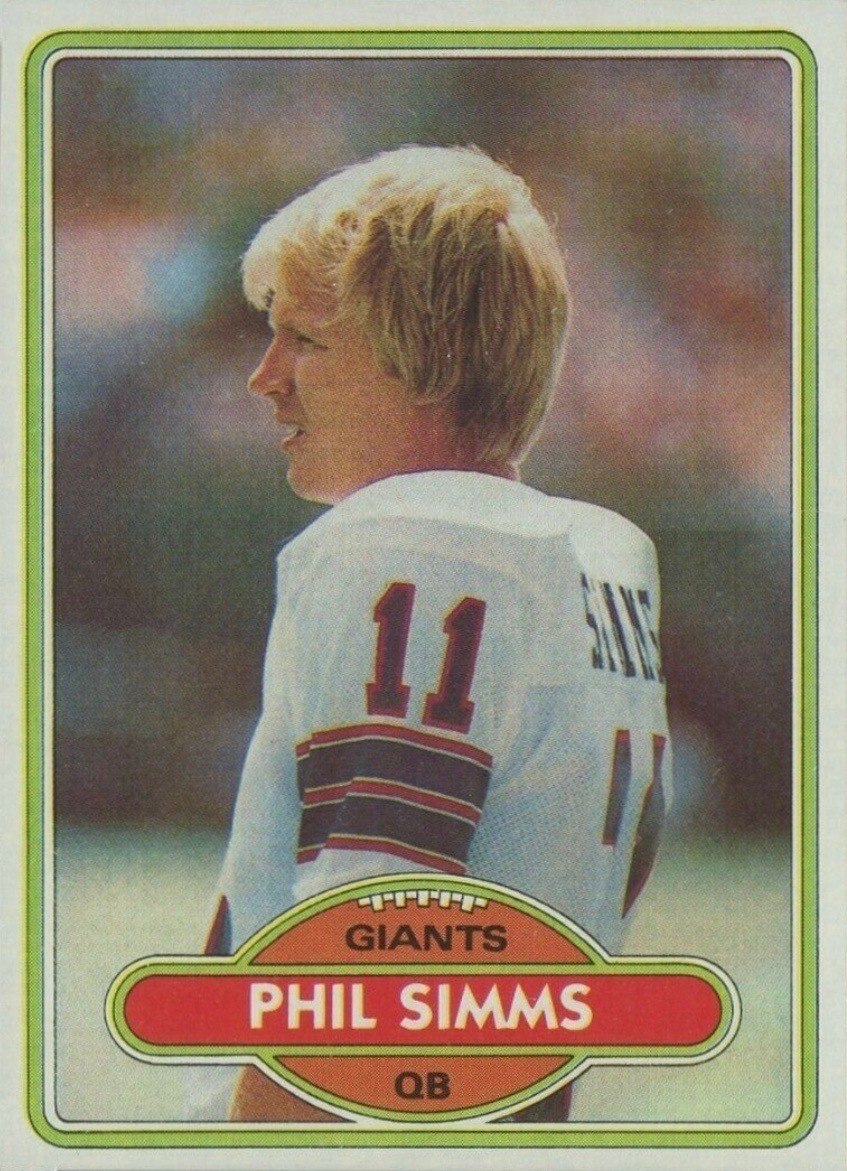 Walter Payton's 1976 Topps rookie card is one of the most coveted football cards in the hobby, and the rest of his cards, like this one, are among the keys to any set in which he appeared.

The first time I truly understood Payton's greatness came when I was a little kid watching one of those NFL Films documentaries on VHS that came with a Sports Illustrated subscription.

As Sweetness ran slow motion up a hill wearing a headband, the narrator discussed how grueling his offseason workouts were as he attempted to keep himself in shape for peak performance.

Whatever he did, it worked, because he eventually became the NFL's all-time leading rusher until Emmitt Smith later topped him. An eight-time Pro Bowler and four-time Super Bowl Champion, Jack Ham is one of four Steelers who appear on this list.

That speaks to how dominant they were in that era and Ham certainly contributed his fair share to that legacy as one of the most feared linebackers of his time.

What set Ham apart more than anything was the quickness and intelligence that he brought to the game.

Seldom out of position, Ham routinely sniffed out offensive strategies and was able to lock down on his opponents with his extreme quickness. While Ham was busy at the outside linebacker position, Jack Lambert was holding things down as one of the greatest middle linebackers of all-time.

He also has the reputation of being arguably the toughest player who ever stepped on the gridiron.

One of my favorite stories about Lambert is how he called a players-only meeting after the team got off to a 1-4 start during the 1976 season.

Joe Greene, Terry Bradshaw, and Lynn Swann were all banged up, and Lambert knew the team needed a spark if they were going to have any success the rest of the season.

After that meeting, the Steelers won the remaining nine games, five by shutout, while giving up only two touchdowns and allowing only 28 points.

For arguably the most dominant regular-season defensive performance in history, 8 of the 11 Steeler defenders went to the Pro Bowl, and it all stemmed from Lambert's leadership and that players-only meeting. A huge Star Wars fan and self-proclaimed "Jedi," Hayes was known for his aggressive bump and run coverage and is considered one of the stingiest shutdown corners of his era.

With three seasons already under his belt, Hayes made his cardboard debut in the 1980 Topps set.

The 1980 season also happened to be his finest as he led the league in interceptions (13) on the way to being named an All-Pro and appearing in his first of five consecutive Pro Bowls.

Hayes is on a shortlist of players who have an NFL rule named after them as the "Lester Hayes Rule" bans the use of Stickum, a sticky substance used by players to gain a better grip on the ball.

The NFL issued the ban ahead of the 1981 season as many felt it was Hayes' use of Stickum that helped him pick off those 13 passes the year before. 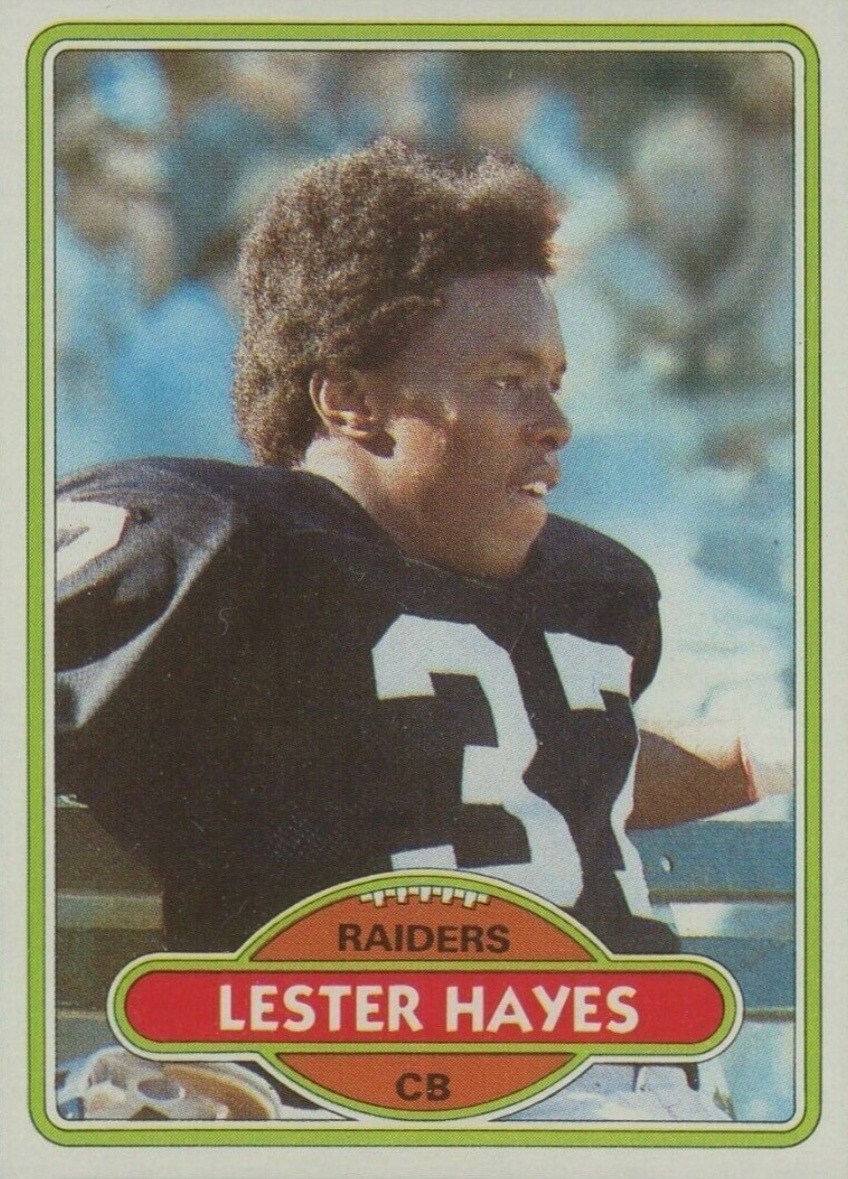 Ottis Anderson got off to a fast start during his rookie debut in 1979 when he rushed for 193 yards in his first game falling 1 yard shy of the record for an NFL debut.

That season, he racked up 1,605 rushing yards and eight rushing touchdowns on his way to being named an All-Pro for the only time in his career.

However, the middle years of his career were disappointing as injuries caught up with him.

Even though he hardly played throughout the preceding playoff games serving primarily as the Giant's goal-line back, he did score a touchdown in Super Bowl XXI as the team went on to defeat the Broncos.

Anderson's career rebounded under Bill Parcells as he was named the NFL Comeback Player of the Year in 1989 and went on to be named the MVP of Super Bowl XXV after rushing for 102 yards and scoring a touchdown. 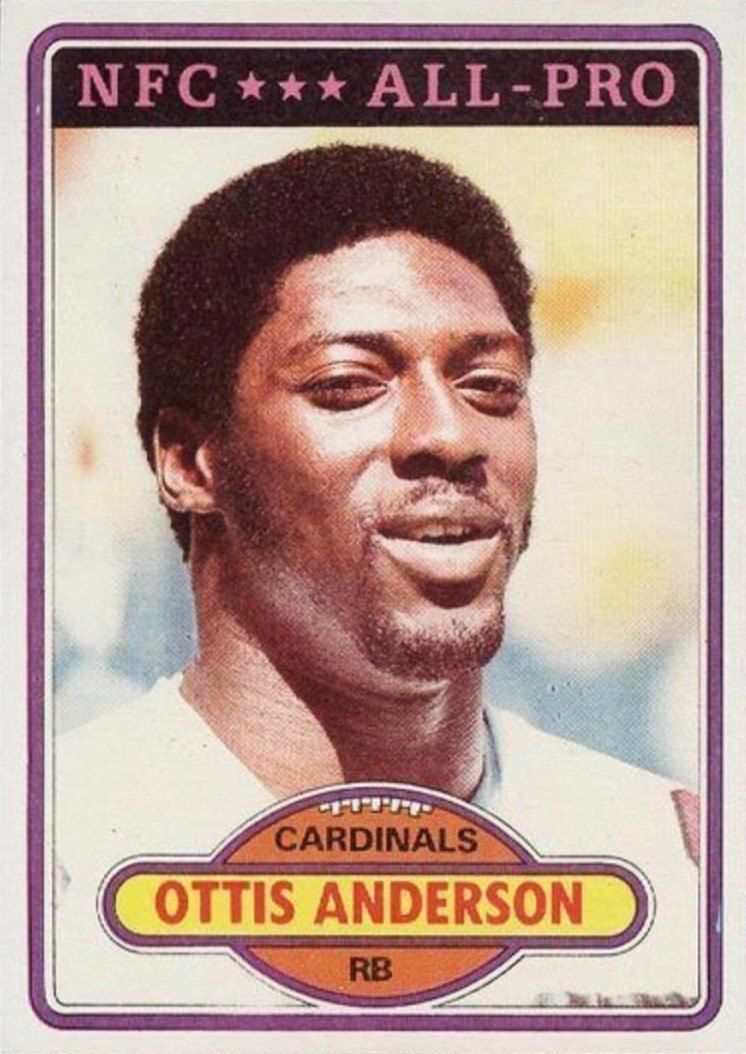 Clay Matthews Jr. is part of a family that was just born to play football.

His father played in the NFL in the 1950s, and his brother, Bruce Matthews, is a 14-time Pro Bowler and Hall of Fame offensive lineman who holds the record for most games played at his position (296).

Oh, and his son, Clay Matthews III, is the superstar All-Pro linebacker who currently plays with the Rams.

Matthews Jr. made his rookie card debut in the 1980 Topps set and left a legacy as a four-time Pro Bowler who was one of the greatest tacklers who ever played.

Like his brother, he also holds the record for most games played at his position with an incredible 278. 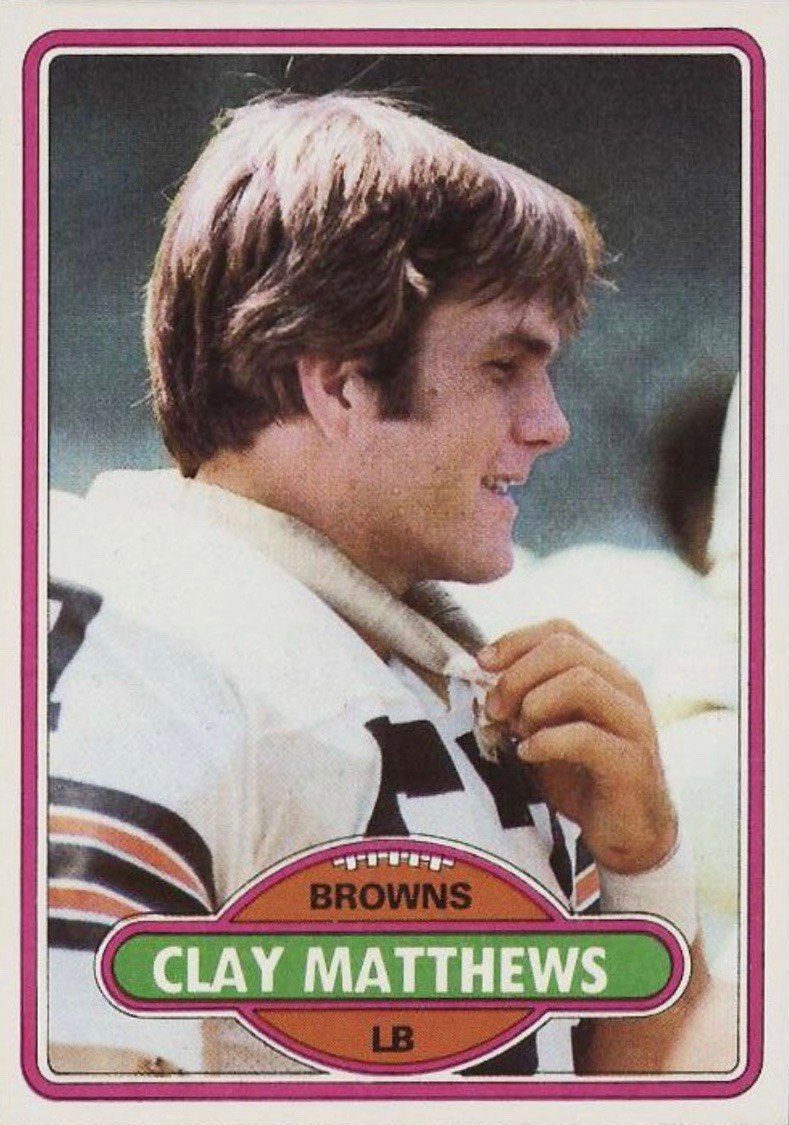 Although Eller retired after the 1979 season after spending one year with the Seahawks, Topps included him in their 1980 set.

Carl Eller made his name from his time with the Vikings from 1964-1978 as one of the most dominant defensive ends in the league.

He helped lead them to the NFL Championship in 1969 while also leading the Vikings to four Super Bowl appearances over his storied career. While Ham and Lambert were playing lockdown defense, Harris was helping to lead the way on the offensive side of things by serving as the Steelers premier back during his 12 seasons with the team.

His cards in top grade remain in high demand these days as he was one of the game's greatest backs on one of the sports most beloved teams. Legendary quarterback, Terry Bradshaw, wraps up our list as the fourth Steeler among the keys to this set.

Known for his competitive fire and leadership qualities, Bradshaw would go on to win four Super Bowls and eight AFC Championships with some of the most dominant teams in league history.

He was one of the most popular players of the era and his cards are still in top demand throughout the hobby. There's a lot to love about this 528-card set even though it does lack any Hall of Fame rookie cards.

Topps airbrushed over team logos due to lack of proper licensing, but the photography is decent, and as we've seen, there are some great rookie cards of some of the biggest stars of the era in Simms, Anderson, Matthews, and Hayes.

Superstars like Walter Payton and the four Pittsburgh Steeler icons, help round out a pretty decent checklist.

For those collectors on the lookout for great Hall of Famers of the era or just a fun set to complete, this set is a good start.