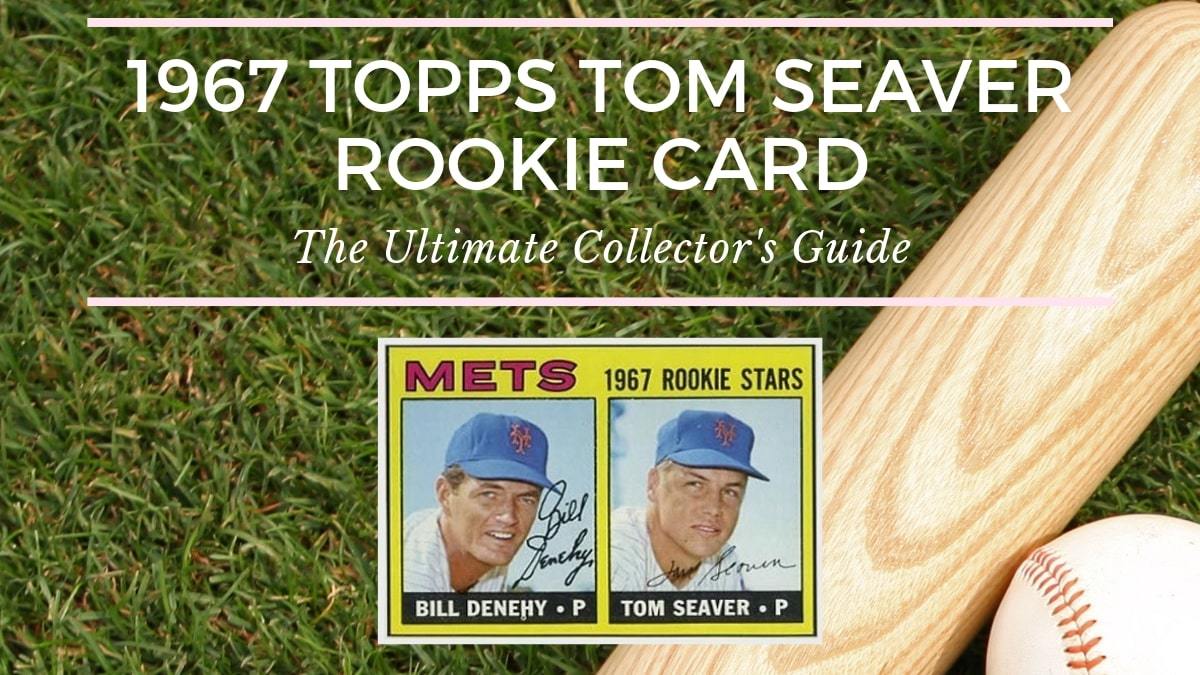 The 1967 Topps Tom Seaver rookie card is one of the most recognizable and sought after cards of the 1960's.

Its dual-panel design meant that Seaver had to share his rookie card with teammate Bill Denehy but collectors still love this card...

The young Seaver doesn't look too intimidating even though he'd go down as one of the game's most feared pitchers of all-time.

In this guide we'll discuss everything you need to know about collecting Tom Seaver rookie cards.

Distinction: This is Tom Seaver's only recognized mainstream rookie card.

There was, however, another Seaver card printed in 1967 which was part of the New York Mets team issue postcard set (picture farther down in this article).

But it is his 1967 Topps card that collectors are typically after and along with the Rod Carew rookie card, it's a key to the entire set.

High number cards in any set were typically printed in fewer quantities making them more scarce than others.

Design: The 1967 Topps design featured player images on a vertical layout but the "Rookie Stars" cards were printed horizontally as two rookies were shown per card.

In this case, Seaver is shown alongside teammate Bill Denehy, who did not end up having nearly as impressive of a career.

A young Seaver is shown in his New York Mets jersey and cap with a facsimile autograph just below his chin.

His name and position are shown atop a black background underneath his image.

What really makes the card pop is the bright yellow background, in my opinion.

It's a fairly straightforward design overall and makes for a great looking rookie card of one of the game's all-time greatest pitchers. Reverse Side: The reverse side of the card is printed vertically and contains a brief mention of his four games as a New York Met.

The card also covers the same topics for Bill Denehy as well. Condition Issues: Centering will usually be the biggest condition obstacles that you'll find with this card.

This is a common issue throughout the entire 1967 Topps set.

The green borders on the back side of the card can also show wear and chipping quite easily.

The first thing people usually ask is: how much is a Tom Seaver rookie card worth?

Along with the Rod Carew rookie, it's a key rookie in the 1967 Topps set and one of its most expensive cards.

If you find one graded by Professional Sports Authenticators (PSA) in PSA 9 Mint condition then you're looking at a four figure price tag.

The following are typically what you would expect to buy or sell this card in each of the different conditions:

Despite it being printed in 1967 as well, it is not considered to be an official "mainstream" rookie card.

But I think it's still a really nice card that depicts Seaver starting his windup in full color photography. Tom Seaver goes down in history as one of the game's best pitchers of all-time. The guy could flat out throw the ball and strike fear in opposing hitters.

Nicknamed "Tom Terrific" and "The Franchise", he is one of only three Mets to have his jersey retired by the team, the others being Gil Hodges and Mike Piazza.

Seaver was an amazing talent and will forever be remembered for his uncanny pitching ability.